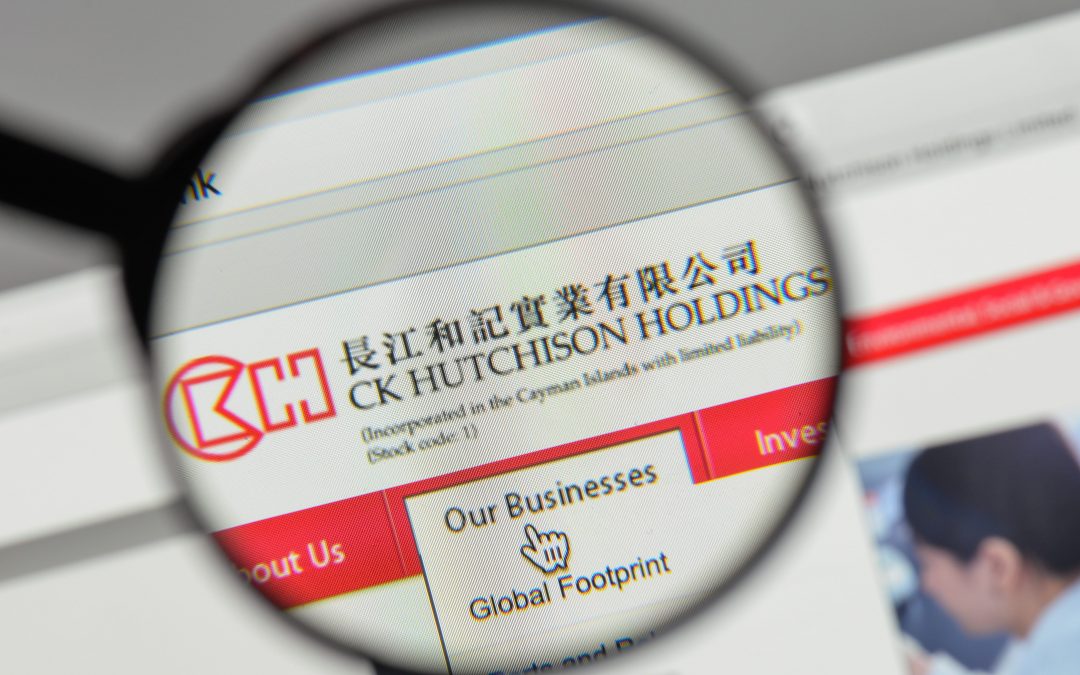 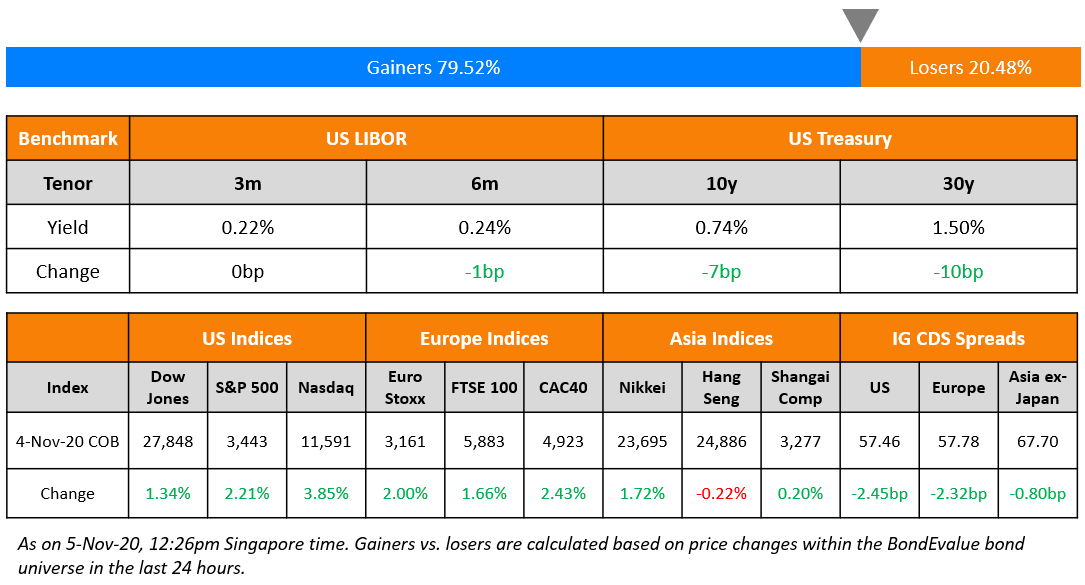 S&P and NASDAQ rallied 2.2% and 3.8% on Wednesday. Tech stocks rallied sharply – Amazon and Google traded up over 6% while Apple and Microsoft up over 4%. Similar gains were seen in the UK and Europe with the FTSE, DAX and CAC up 1.7%-2.5%. US ISM Non-Manufacturing came in at 56.6 vs 57.5 forecasted and ADP employment disappointed at 365k vs over 600k expected for October. US Treasuries rallied with the long-end yields dropping 7-10bp and the yield curve bull flattening (Term of the day, explained below). The move is being attributed to the Democrats less likely to make a blue wave, which may scale back fiscal stimulus bets. Top rated corporate bonds also rallied on the back of the move in Treasury yields. The US investment grade CDS spread narrowed 2.5bp while HY narrowed 17bp. Europe main and crossover CDS spreads tightened over 2bp and 10bp respectively. Asian equities are again higher over 1% with Asia ex-Japan CDS spreads tighter by 2bp.

Fitch Downgrades Huarong Industrial to ‘BBB+’ from ‘A-‘; Off RWN; Outlook Stable

Long-dated dollar bonds of high-rated issuers such as Apple (Aa1/AA+), Alphabet (Aa2/AA+), Amazon (A2/AA-/A+), Temasek (Aaa) traded higher by ~3% on the back of the rally in US Treasuries. 10Y and 30Y Treasury bonds rallied with yields falling 12-15bp on Wednesday. The move in Treasuries is being attributed to the Democrats less likely to make a blue wave, which in turn may scale back fiscal stimulus bets given a possible Republican senate. Whilst not a risk-off move in Treasuries, especially with stocks and credit higher, the move reflects a possible reduction in overall supply, which could cap Treasury yields in the near-term alongside the Fed’s bond buying. 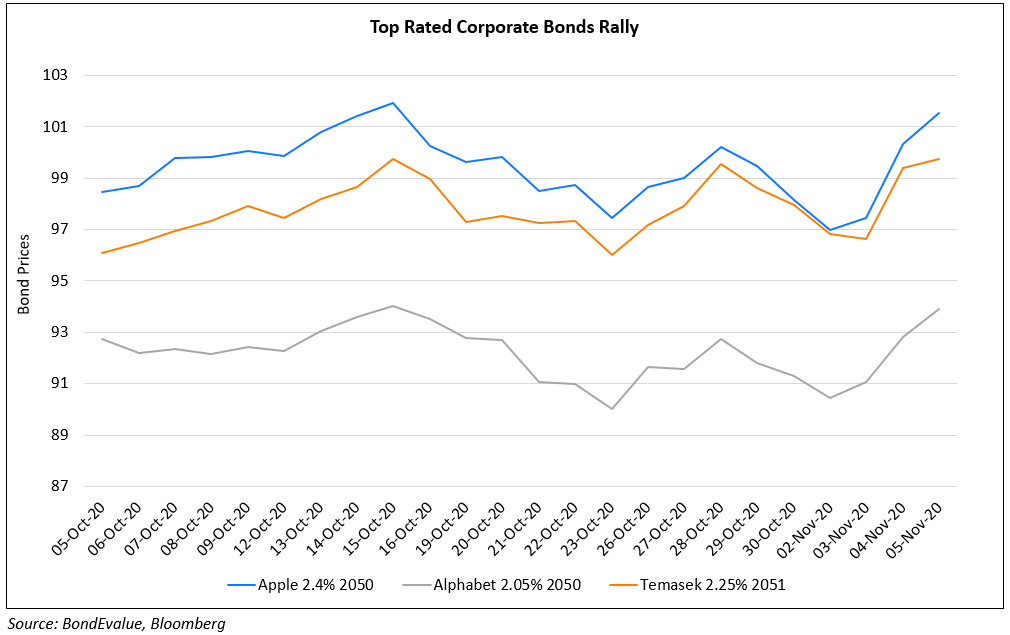 The broad components of a dollar bond’s yield are Treasury yield and credit spread. In the table below, we have compared the bond yield and z-spread for select high-rated dollar bonds. Looking at the Temasek 2.25% 2051s, we can see that while its yield tightened by 14bp between Tuesday and today, its z-spread tightened by 2bp, indicating that the yield tightening attributable to Treasuries would be roughly 12bp (yield minus z-spread).

DBS, OCBC and UOB reported Q3 earnings on Wednesday. Results showed that the worst may be over but the banks provisioned cautiously on account of the pandemic. They pointed to recovery in business momentum coming out of the lockdown, and note that provisions are ample to buffer against uncertainties.

UOB reported net profits of S$668mn ($492mn) compared to S$1.12bn ($820mn) in the same quarter last year, with both net income and non-interest income lower. Additional S$339mn ($250mn) in allowance for non-impaired assets was set aside to strengthen provision coverage. NPLs were at 1.5%, down in the quarter and CET1 stood at 14%.

Hong Kong-based CK Hutchison (CKH) said on Wednesday that it is in talks with Spanish telecom company Cellnex for the sale of its European mobile towers for €10bn ($11.7bn). CKH had carved out its large portfolio of mobile towers, consisting of 29,100 sites across the UK, Italy, Sweden, Denmark, Austria and Ireland, in August into a separate entity called CK Hutchison Networks. In its exchange filing, the Li Ka-shing backed company said, “Upon completion, Cellnex and the relevant Group companies will enter into service agreements for Cellnex to provide to the Group telecommunications infrastructure services and to support an accelerated 5G network rollout through a committed built-to-suit expansion program.”

Lippo Malls Indonesian Real Estate Trust (LMIRT) was downgraded by Fitch to BB- from BB with a negative outlook. Fitch also downgraded their $250mn senior unsecured notes due 2024 issued by subsidiary, LMIRT Capital Pte. Ltd. to BB- from BB. Fitch noted that financial metrics will remain weak for a prolonged period, as the recovery in Indonesia’s retail sector is taking longer than they expected due to the pandemic. LMIRT’s Q3 results also show weak retail operations with net property income of S$13mn ($9.6mn), 20% below their forecast. Fitch expects the funds from operation (FFO) fixed-charge coverage ratio to dip at least until 2021. They also do not expect EBITDA to return to pre-pandemic levels during the time period.

Fitch says that only 50% of their leases expiring in 2020 have been renewed by end-September and weak consumer sentiment impair tenants’ ability to continue operations and thereby pay rent. Rental reversion, a metric that shows whether new leases that were signed in the quarter have higher or lower rental rates than before, were positive 4.4% YTD, but LMIRT expects average occupancy to drop to around 80% by end-2020, from above 90% historically. Fitch treats LMIRT’s S$260mn Perps issued in 2016 and 2017, as 100% equity due to strong going-concern and gone-concern loss-absorption features. Assumptions for the rating include revenues falling 45% and 38% in 2020 and 2021 from 2019 levels, entertainment outlets remaining closed until end-2021 and LMIRT continuing to pay perpetual coupons, but distribute less dividends than historically due to weaker performance.

Bull flattening refers to a change in the yield curve where long-end rates move down faster than short-end rates. This not only has a flattening effect on the entire yield curve but also has a net effect of interest rates moving lower and bond prices moving higher. If the yield curve moves lower and bond prices move higher, it is considered a bull move, while the opposite is a bear move. In yesterday’s move, 2Y treasury yields fell 2bp while the 10Y and 30Y yields fell over 10bp making the 2s10s/2s30s yield curve flatter led by the 10Y and 30Y – a bull flattening move.

“The short Treasuries trade is really coming back to bite. Investors are clearly pricing in a ‘no blue wave’ scenario,”. He also said investors are pricing in a higher possibility of a Trump victory and a more fiscally conservative stance.

“The bond market was efficiently priced for a blue sweep and potential for higher deficit spending.” Now, “it is looking less likely that we will have the final results soon. So you are seeing a flight to safety as bond investors brace for uncertainty.”

“In light of the second wave of Covid-19 infections and renewed lockdowns, further monetary policy support is required to safeguard favorable financial conditions and underpin economic activity in the face of a deteriorating growth outlook,” Schnabel said in a speech published on Wednesday. 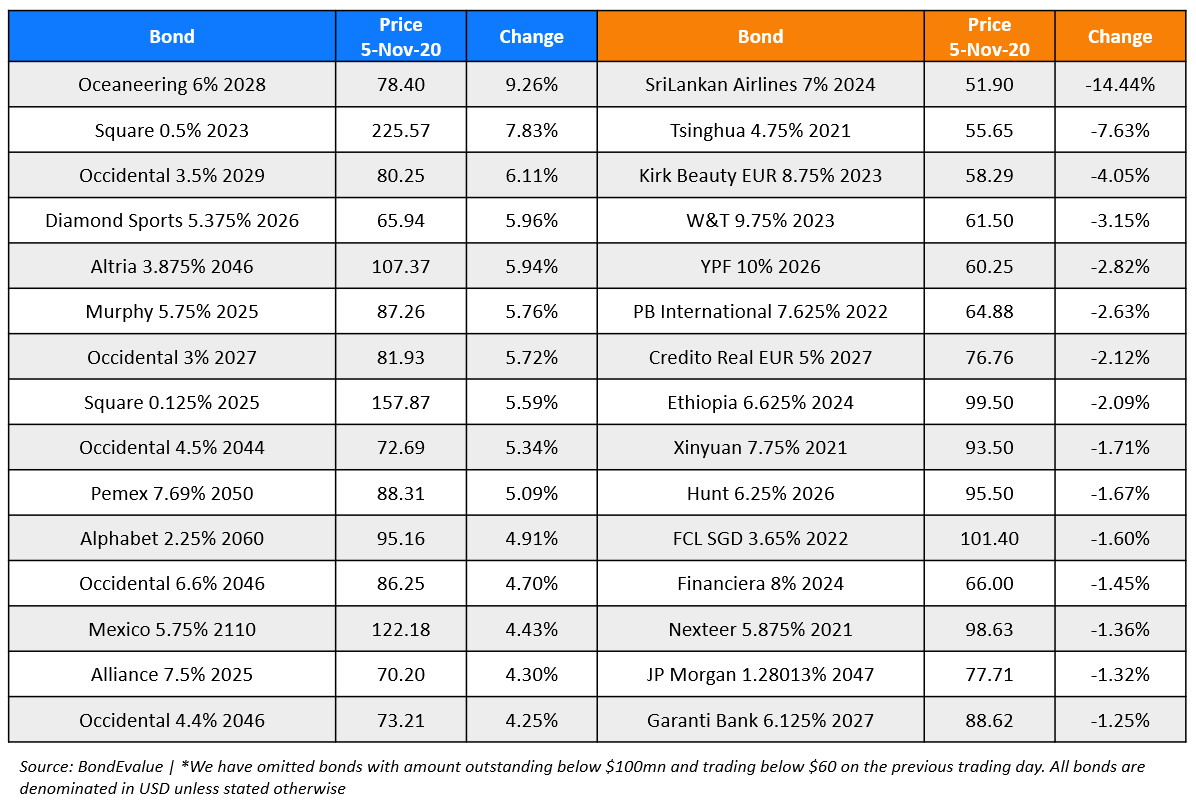