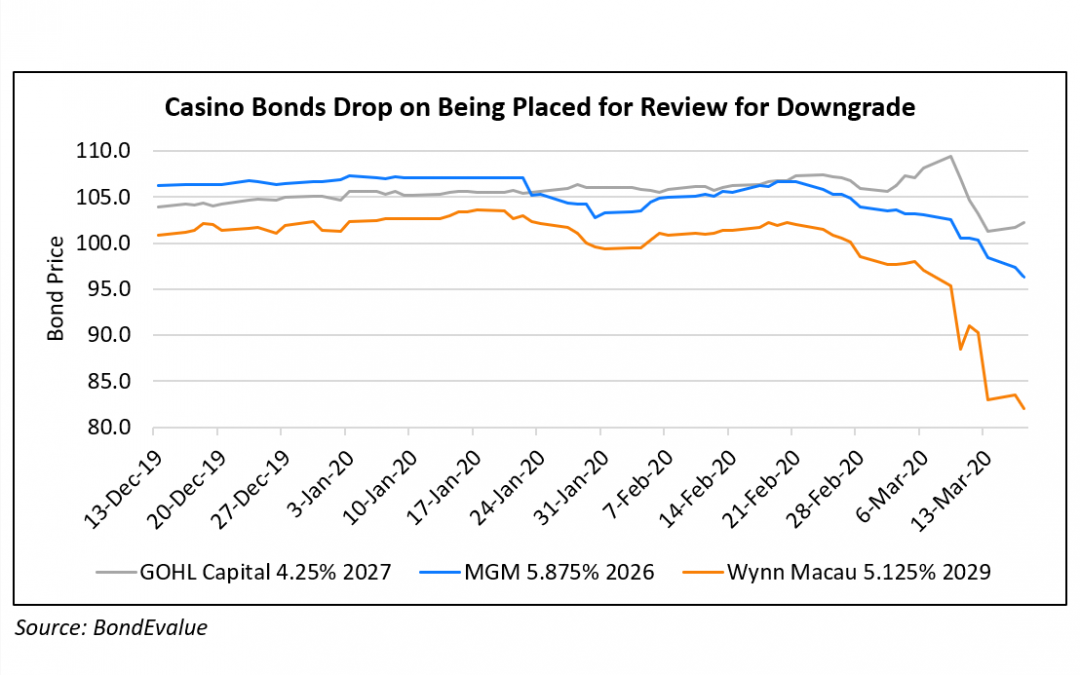 More setbacks are in store for Asian markets after Wall Street had its worst day since 1987 with travel lockdowns, social isolation and distancing impacting economic activity. This has forced central banks to act with strong measures but leading many to question if they had moved too much and too quickly.
“The spread of COVID-19 to the US is causing a sharp contraction in spending on activities that involve travel and congregating in public. Given the speed of these developments, we are taking the unusual step of updating our base forecast for the US between scheduled releases. We now expect a recession to begin in the second quarter,” said Joel Prakken, Chief US Economist, IHS Markit.

The fast spreading virus which has claimed 7,138 lives and infected over 181,000 people globally remains on top of investor minds as Japan’s Nikkei 225 is down 1.5% and the Kospi benchmark is 3.2% lower. The MSCI Asia Pacific ex-Japan index is 0.6% ahead of markets opening in Hong Kong whose futures are down 2%. Even after Wall Street’s precipitous fall overnight, Goldman Sachs said in a report US stocks could plunge 20% more after falling into bear market.  The Dow Jones Industrial Average sank 12.93%, the S&P 500 plunged 11.98%, and the Nasdaq Composite swooned 12.32%.
Leaders of the Group of Seven (G-7) countries over teleconference discussed the coronavirus pandemic “to accelerate the national health and economic responses”. European Council President Charles Michel said at a press conference after the call the leaders expressed ‘strong’ will to cooperate to tackle virus.
One trader compared the Fed’s move as “filling up the tank of a car with four flat tyres”, but strategists said the moves are aimed at keeping the system working and the economic impact would not be immediate.

“Even during the GFC when the Fed cut interest rates, markets initially yawned – it is not necessarily useless. Things would have been worse, had they not cut. It just takes time to take effect. We are in a period when deleveraging is taking place and investors are reducing risk and buying government bonds. It will take a while for confidence to come back,” said Rajeev De Mello, head of the Development Committee at the Investment Management Association of Singapore.

Moody’s upgraded Yes Bank’s credit rating by two notches from Caa3 to Caa1 after the bank’s reconstruction scheme was approved by the Indian government. The rating action came in after the Indian authorities and Yes Bank announced that the moratorium on its depositors and creditors to be lifted on 18th March 2020. As per the reconstruction scheme, State Bank of India (SBI) and six other financial institutions will pump in INR 100 billion as new capital. Yes Bank’s 3.75% bonds due 2023 closed at 89.17.

U.S. banks may be downgraded by Moody’s Investors Service in the wake of the Federal Reserve’s rate cut and as the worldwide coronavirus pandemic rattles markets. The outlook for lenders was changed to negative from stable, Moody’s said Monday in an emailed statement. S&P cut Boeing From A-/WATCH NEG to BBB/WATCH NEG.

Moody’s has placed on review for downgrade the Baa1 issuer rating of Genting Berhad (GENB) and the A3 issuer rating of Genting Singapore Limited. This comes amid growing concerns over the coronavirus impact on the economy, falling oil prices and asset price declines across the world. The company’s 4.25% bonds due 2027 dropped over two points to 102.2 on the news. Moody also placed MGM Resorts and Wynn Resorts Finance on Review for Downgrade. 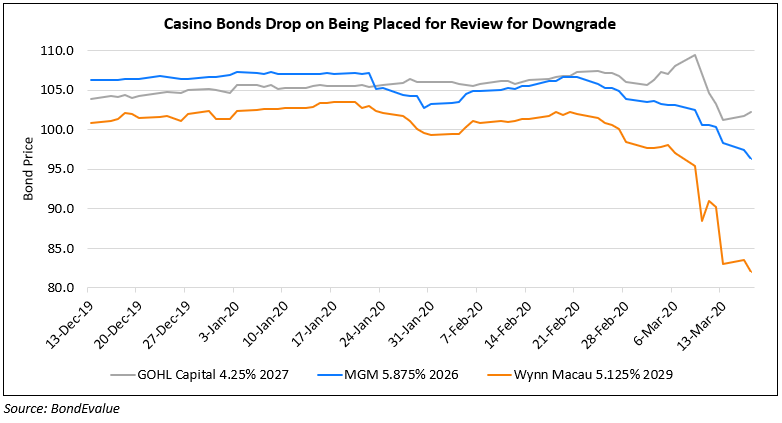 Yields over risk free rates have surged to levels last seen during the 2008 financial crisis. The CP market provides corporates with short-term IOU to buy inventory or make payrolls. This market is stressed and corporates are drawing down on backup credit lines. An example is the commercial paper issued by Apple Inc that was recently quoted at a spread of 80 bps over Treasury Bills when usually it is quoted around 5 bps over the same. Most analysts expect the Fed to intervene. Despite policy makers moving to add liquidity to markets, Primary issuance have seized up. Notably, there have no issuance in the recent 3-4 days.

The Philippines halted stock, bond and currency trading until further notice, becoming the first country to shut financial markets in response to the widening coronavirus pandemic. Other markets including the NYSE have issued statements that they plan to stay open. Philippine Equities have tumbled more than 30% this year, among the biggest declines in Asia. Shutting markets during times of crisis is extremely rare but not without precedent. America’s stock market closed for almost a week after the 9/11 terrorist attacks in 2001, while Hong Kong halted trading in the wake of the Black Monday crash in 1987. Greece shut its stock market for about five weeks in 2015. Although this kind of move affects the international reputation of the market, what happens when trading resumes depends on the state of global markets. 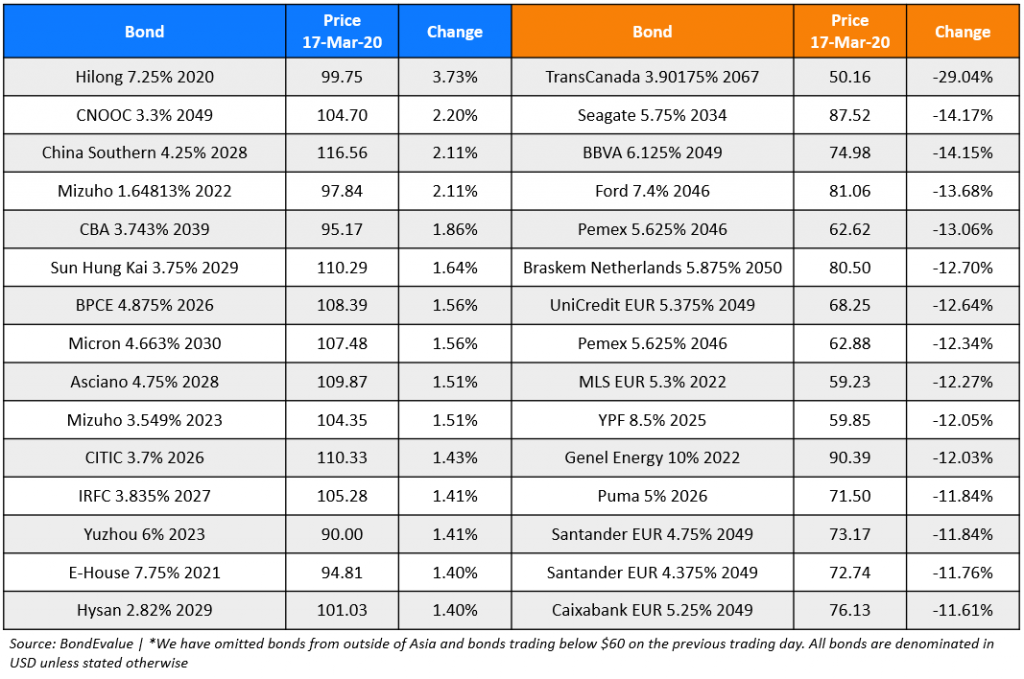 China has unveiled a rash of horrific data, further hammering markets after the Fed’s emergency rate cut set panic amongst investors worried about the empty monetary tool kit were the coronavirus crisis to worsen. China’s fixed asset investments in the January February period contracted 24.5%, a fall much steeper than the estimated 2% forecast. The country’s industrial output in the first two months of the year dropped 13.5%, falling more speedily than the -3% forecast, and retail sales plunged 20.5%, worse than the forecast contraction of 4%.

“The latest activity and spending data were much weaker than expected and point to a far deeper downturn than during the Global Financial Crisis. While domestic conditions should improve slowly in the coming months, the mounting global disruption from the coronavirus will hold back the pace of recovery,” said Julian Evans-Pritchard, Senior China Economist at Capital Economics.

Evans-Pritchard had previously assumed that the statistics bureau would be reluctant to fully acknowledge the recent weakness as doing so would make official GDP targets unreachable, but the contraction was worse than anticipated and therefore the prognosis becomes gloomier. Not everyone was surprised by the data, as fears of what lay ahead is forcing recalibrations of forecasts. “The actual shock could be much bigger than those deeply negative January-February numbers suggest, because the lockdowns started only from 23 January. Given the relatively slow resumption rate (around 70% at the moment), we expect negative growth for all activity data in March too, though these will likely be less negative,” said Ting Lu, a Nomura economist, who said Monday’s data release was in line with his expectations.

For an indication of the severity of the disruption caused by the lockdowns imposed by Beijing to halt the spread of the coronavirus, look no further than the collapse in home sales as home builders have been forced to shut their showrooms, while many of their on-site sales offices remain closed. Last month, contracted sales among 30 mainland developers tracked by Bloomberg fell by an average rate of 33 per cent year on year, the sharpest fall in at least six years despite strenuous efforts by home builders to shift their sales to online channels. In January, house prices in 70 major cities across China rose at their slowest pace in almost two years, and may have contracted last month.

The virus-induced shock to the housing market – which directly accounts for 7 per cent of the country’s gross domestic product, or one fifth of output if indirect contributions are included, data from Bloomberg shows – has squeezed developers’ cash flows. With the proceeds from presales of apartments constituting the most important source of funding for property firms, an increasing number of distressed developers are going bust, while some of the weaker players risk defaulting on their US dollar-denominated bonds.

In a report published by Standard & Poor’s last week, the rating agency warned that “declining sales will hurt developers’ liquidity”, adding that “several companies already in the ‘CCC’ category, or with low ratings with negative outlooks, may face liquidity issues over the next several months.”

With shopping and investment contracting for the first time on record, and export markets on the edge of seizing up, the government has every reason to manage expectations lower. Instead Beijing is predicting a quick recovery from the coronavirus fallout and sticking to its old 6%-or-so growth target. Pulling that off would generate further market distortions.

On Monday the National Bureau of Statistics laid out a litany of woe. Everyone expected bad news, given the outbreak paralysed nationwide commercial activity for most of the combined January and February period. Even so, the data was unexpectedly grim – a warning of the pain ahead for other nations.
The property sector, a huge driver of demand in industries ranging from steel to finance to bathroom fixtures, came unhinged: construction starts retreated 45%. Retail sales fell 20.5% and fixed asset investment shrank 24.5%: both firsts. Industrial output declined for the first time since 1990. China has probably experienced its worst two months of economic performance since Chairman Mao Zedong’s devastating Cultural Revolution, which ended in the 1970s.