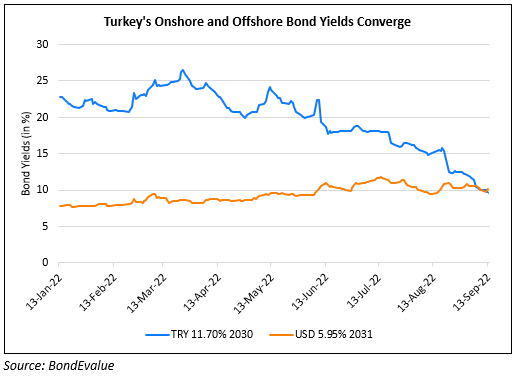 Yields on some of Turkey’s local bonds and dollar bonds have converged, with select sovereign lira bonds’ yields even going below its offshore counterparts. For instance the yield on its TRY 11.7% 2030s have gone below its USD 5.95% 2031s.

With regard to most emerging market (EM) debt, the focus typically lies on the ability of a sovereign to pay its offshore bondholders. Some recent examples of these include Sri Lanka, Pakistan and Zambia. With a currency depreciating as much as the lira (down 27% YTD) and inflation at over 80%, in a typical scenario, Turkey’s dollar bonds would likely be impacted more than its local bonds – however this has not been the case. While there is no clear reason as to why this conundrum has persisted this year, Bloomberg notes that the move is best understood by government policies. Turkey’s central bank (CBRT) delivered a shock rate cut demanded by President Erdogan while pushing lenders to buy more lira bonds, thereby helping prices move higher and yields go lower. In addition, Turkey’s forex reserves which fell to a 20Y low of $6.07bn in early July have more than doubled ever since. Bloomberg notes that there have been “mystery capital flows” into Turkey that have helped boost its reserves and finance its widening current account deficit. In the past, the CBRT said that these inflows probably came from Turks who brought cash savings into the banking system when the lira weakened, or by depositing foreign currency they earned from tourists.