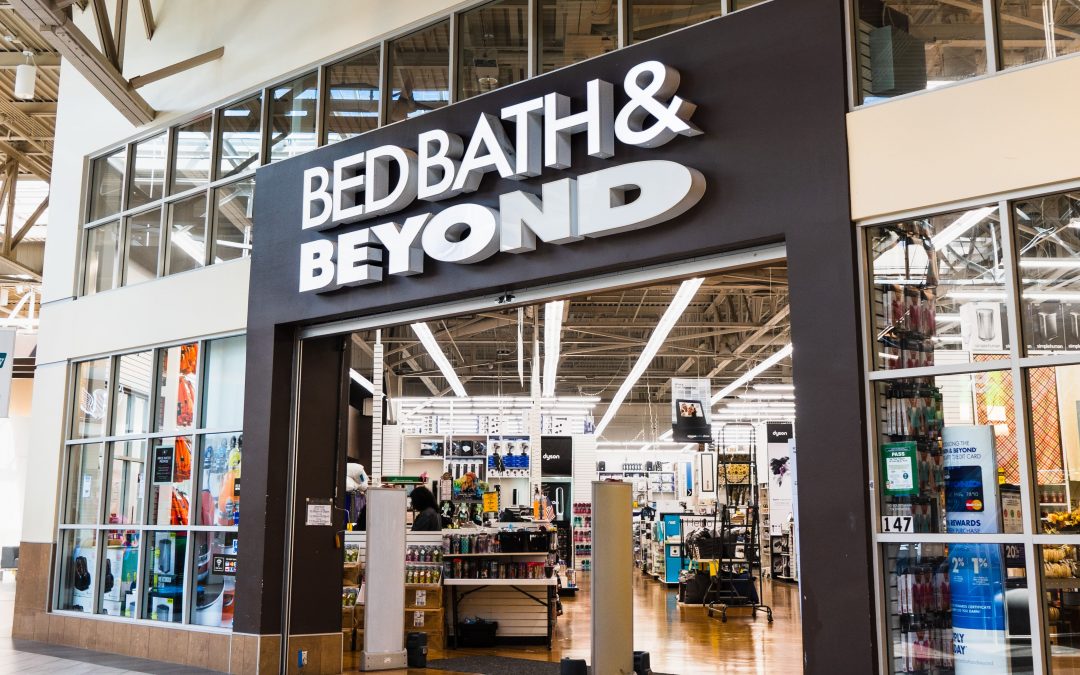 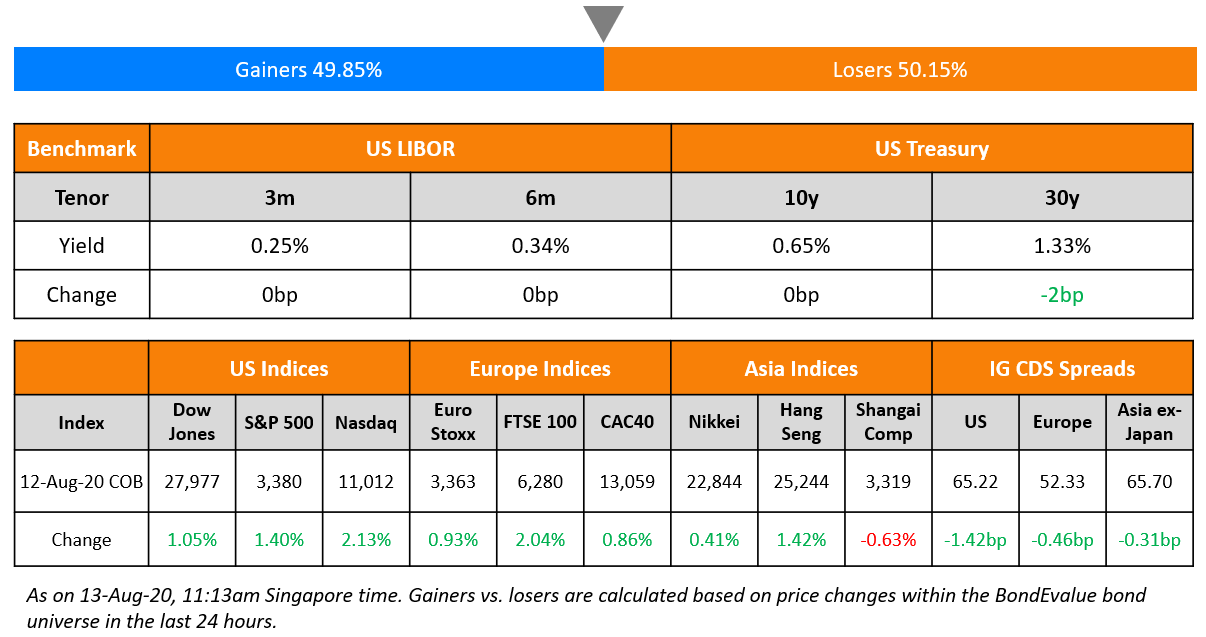 Markets are opening higher this morning in Asia after an overnight rally on Wall Street. Major indices are near their all time highs and Nasdaq outperformed led by tech giants like Apple, Microsoft and Amazon that gained 3.3%, 2.9% and 2.6% respectively. The rebound from Tuesday’s reversal came without any significant news as the next covid-19 aid package still remains stuck between US lawmakers. European shares were also well supported. US treasuries remain heavy as this week’s huge supply led to an increase of 1-4bp in the yields. Asian primary bond issues for August have already surpassed the same month sales from last year and CDS spreads narrowed a tad across the board. 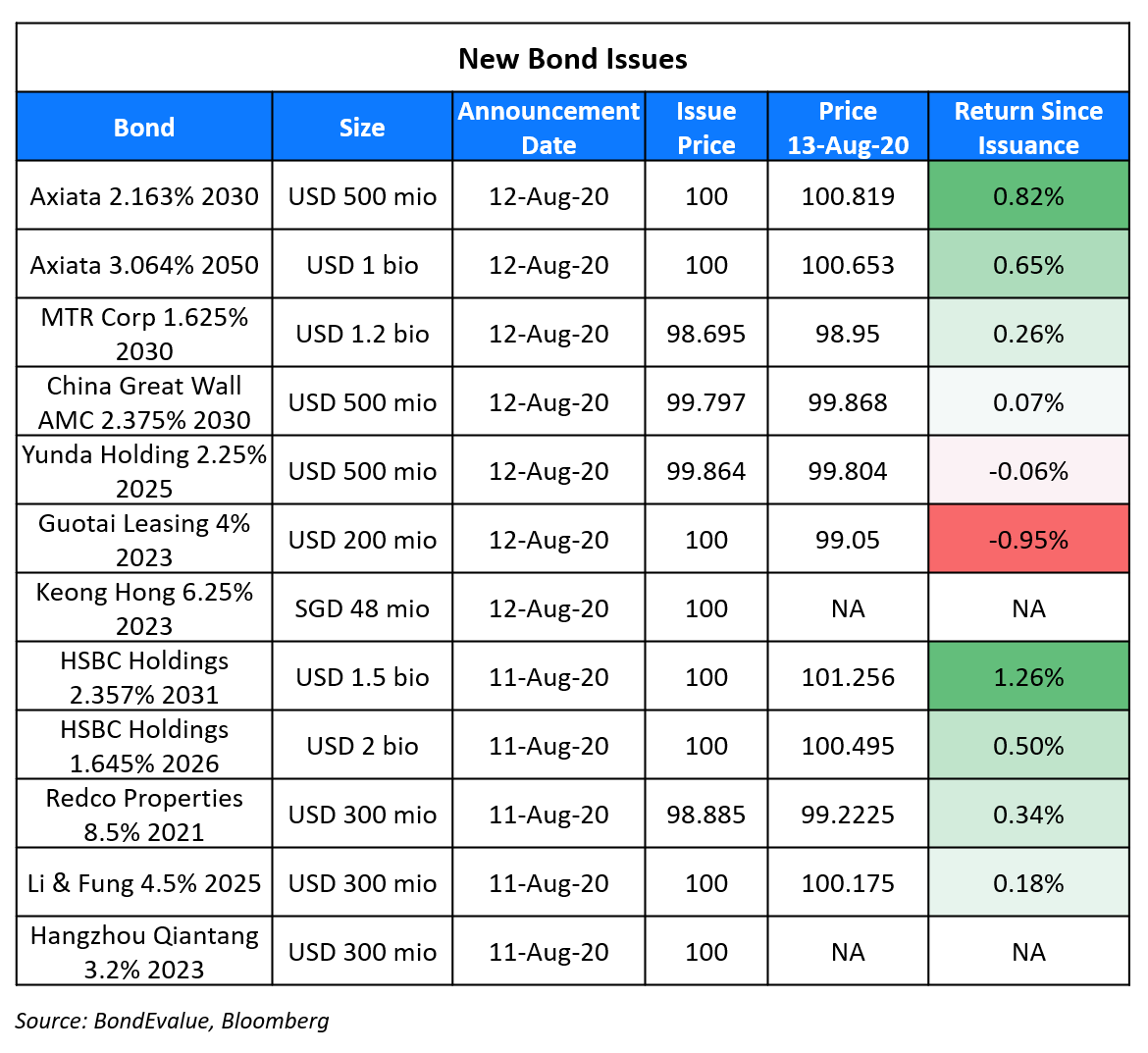 Chinese logistics and supply chain services provider Yunda Holding raised $500mn via 5Y debut bonds to yield 2.279%,197.5bp over Treasuries and 47.5bp inside initial guidance of T+245bp area. The bonds, with an expected rating of Baa2, received orders over $3.9bn when final guidance was announced, 7.8x issue size. The Reg S notes will be issued by wholly owned subsidiary Yunda Holding Investment and guaranteed by the Shenzhen-listed parent company.

As the housing market in China stages a resurgence, The National Association of Financial Market Institutional Investors (NAFMII) has issued fresh guidelines for property developers by putting restrictions on debt issuance. The stipulations come as the property market in China saw a comeback post the pandemic induced slowdown as June saw the highest growth in home prices over a 10-month period. Property prices had rebounded as the central bank loosened credit to support an economic recovery from the pandemic, which led to massive buying across large and medium cities. Top policy makers have indicated that use of the property sector for short-term stimulus to bolster the economy would not be permitted. According to Bloomberg, there has been no response from the NAFMII officials, but the people familiar with the matter said that the new guidelines took effect on Aug 10 and include the following:

The NAFMII is an influential body in the nation’s interbank market which was founded on September 3, 2007, under the approval of the State Council of China. NAFMII aims to propel the development of China’s OTC financial market, which is composed of the interbank bond market, interbank lending market, foreign exchange market, commercial paper market and gold market.

American retail chain, Bed Bath & Beyond lifted the suspension on its deb-reduction plans by launching a buyback offer of $300mn on its outstanding senior bonds. Bed Bath had earlier suspended its plans to pare down its debt in a bid to preserve cash amid the pandemic. Details of the buyback are listed in the table below: 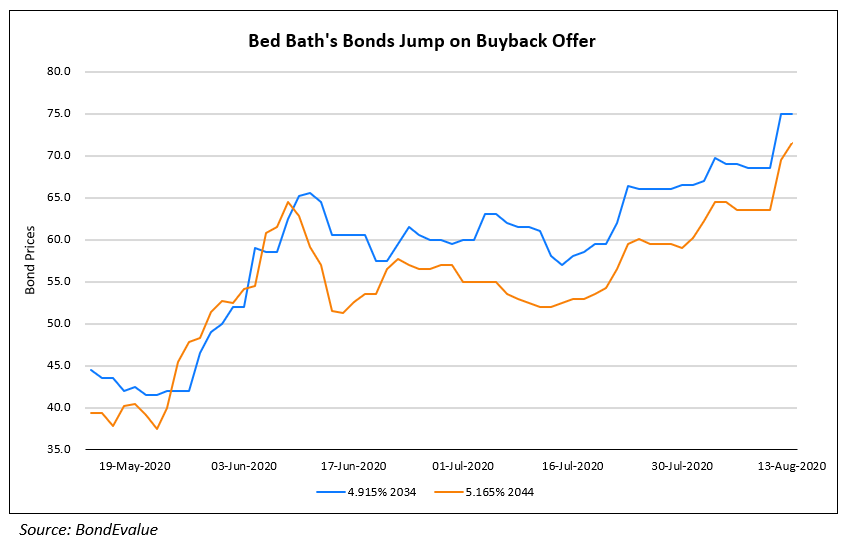 Airline operators’ bonds have seen a resurgence as there seems to be an optimism in the markets over a vaccine and as passenger traffic ramps us. United Airlines announced plans to add 28 daily flights to Florida from November 6 from various locations on the hope of leisure travelers resuming trips to the Sunshine state. United said the addition of new flights is a part of its “continuing strategy to aggressively, and opportunistically manage the impact of COVID-19 by increasing service to destinations where customers most want to fly.” United Airlines’ 5% and 4.875% bonds due 2024 and 2025 rose over 3% yesterday to close at 89 and 87 cents on the dollar respectively.

All the airlines’ bonds had seen a huge drop in the second half of March this year as the fear of the pandemic gripped the people. Southwest Airlines and Delta Airlines‘ bonds were fairly quick to stabilize based on their strong financials despite seeing heavy losses due to a drop in passenger traffic. However, the bond prices for American Airlines and United Airlines plunged to new lows by mid May before showing a resurgence after the passenger numbers were revealed by the Transportation Security Administration’s (TSA). The highly leveraged American Airlines and Delta Airlines continued to see volatility amid the week top line revenues while being downgraded by credit rating agencies. These airlines were forced to go to the markets with debt issuance. But the worst seems to be over and the bonds of these airlines are also witnessing a recovery over last one month. American Airlines’ 5% bonds due 2022 traded at 66.3 cents on the dollar, up from 53.0 one month back. Delta’s 3.635% bonds due 2022 traded at 98.6 cents on the dollar, up from 95.1 for a month ago. 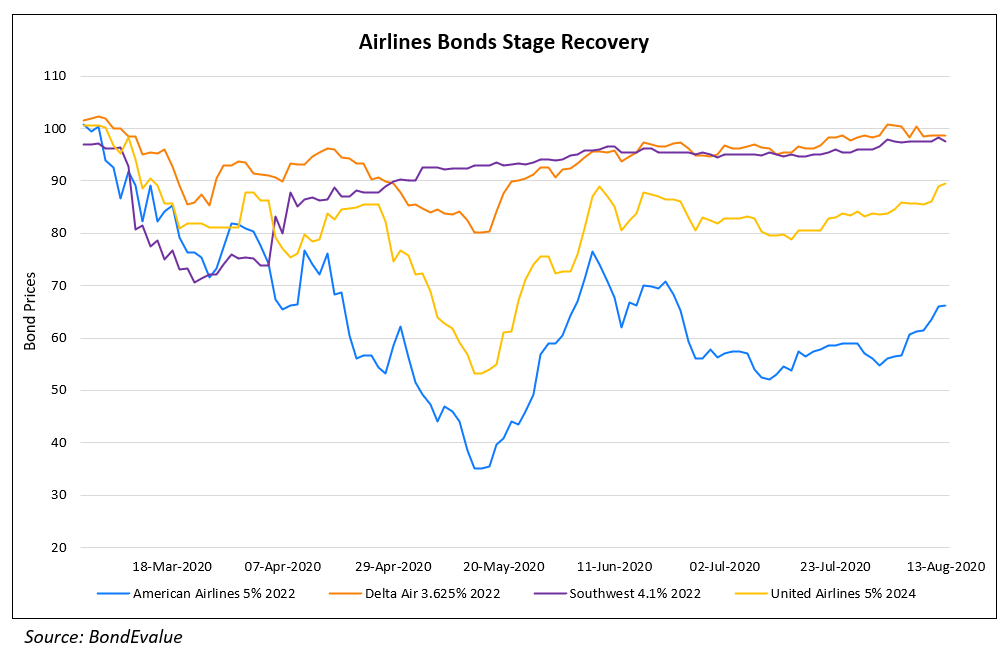 In a related news, SriLankan Airlines also announced that it will resume flights to Doha from Aug 14. The airline is operating flights to destinations such as London and Tokyo and the new announcement indicates that it will fly to Frankfurt, London, Male, Zurich, Sydney, Paris, Narita, Milan and Melbourne. Its bonds rose by 4.5% yesterday to close at 71 cents on the dollar.

Treasury yields have been on the rise over the past week ahead of the massive supply of new Treasury bonds flooding the market. The Treasury sold a record $48bn of 3Y bonds on Tuesday, $38bn of 10Y bonds on Wednesday and plans to sell $26bn of 30Y bonds today. At the long-end, the 30Y Treasury yield rose by over 17bp from 1.198% on August 6 to 1.374% on August 12, before falling to 1.333% currently. The rise in 30Y yields pushed the yields on long-dated dollar bonds from high-rated corporates up across the board. Among the bonds that fell in price were Google parent Alphabet’s 2050s and 2060s as per the chart below. 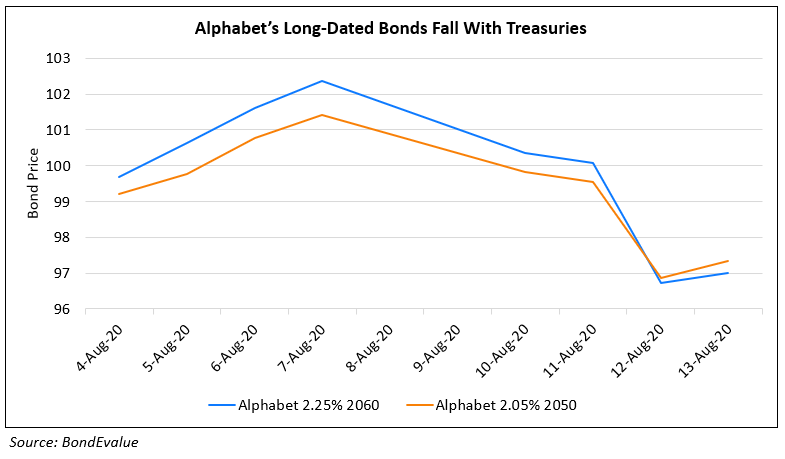 A Regulation S or Reg S bond is one that is issued in the international bond market and is usually cleared through Euroclear and Clearstream. These bonds cannot be sold in the US, except to qualified institutional buyers (QIBs) under the 144A SEC rule. The 144A rule, issued in 1990, modified a two-year holding period rule on privately placed securities by permitting QIBs to trade in these securities among themselves. Thus, a 144A bond, with a unique identifier, is privately placed to US based QIBs and usually clears through DTCC.

On greater credit risk from US stimulus

“Though municipal budgets are strained, muni bond yields have reached historic lows due to constructive seasonals and risk-off sentiment,” they wrote. “Failure to secure aid for state and local governments presents downside risk for bonds of low credit quality at a time when investors are willing to move down the credit curve.”

“Those with private loans get no reprieve from payment due on principal and interest,” the strategists said. “Thus, we believe that securities backed by private student loans with speculative grade credit quality and tranches with few enhancements may experience pressure.”

On long-term rise in gold prices

“It also had previously gone to a new high in just about every other currency as the dollar held up pretty well until recent months when the DXY index dropped about 10% or so from high to low, and that went along with gold going to new highs,” Gundlach noted.

“Gold will ultimately go much higher because I think the dollar’s going to go much lower,” he said. “I think the dollar goes lower in the long-term for sure, but in the short-term, I think most markets have lost some of their momentum of the recent moves,” Gundlach said.

On the comparison of EU bonds to Germany debt

In a note led by George Cole, strategist at Goldman Sachs Group Inc.

“EU bonds are not bunds — which is the clear benchmark safe asset not just in yield level but by its empiric behavior,” they wrote. “The Recovery Fund represents a significant step forward for the institutional framework of Europe, but bunds still demonstrate a clear pre-eminence as the definitive European safe asset.”

EU bonds are “a new supra hero,” they wrote. But “the insurance value of bunds in almost all states of the world, including extreme scenarios such as euro-area breakup during which claims on Germany would likely be of superior quality to claims on other members or supranational entities.”

“Banks are a lot more driven by macro-economic fundamentals,” Mishankina said. “Given the currency weakness, there is a risk of weaker credit quality for the banks in the form of increasing non-performing loans.”

Trieu Pham, a strategist at ING Groep NV in London

“Those are subordinated bonds and investors always ask some risk premium for those,” Pham said. “In good times, the additional risk premium demanded declines, and in times of concern, it tends to expand.”

On the possibility of China Central Bank buying government debt

“There’s a possibility that the central bank has bought sovereign bonds,” Ming wrote, though he cited the possibility of other factors being behind the rise. The move is more likely to be an effort to “directly finance the real economy” rather than quantitative easing, with the PBOC buying anti-virus bonds that invest in projects with a steady return, he said. 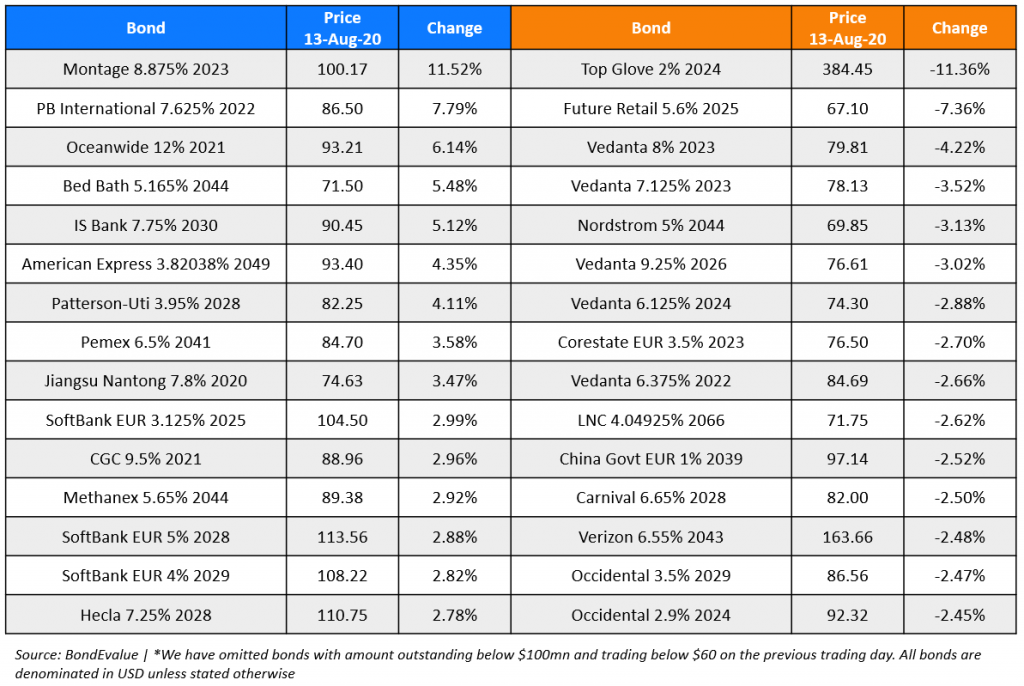