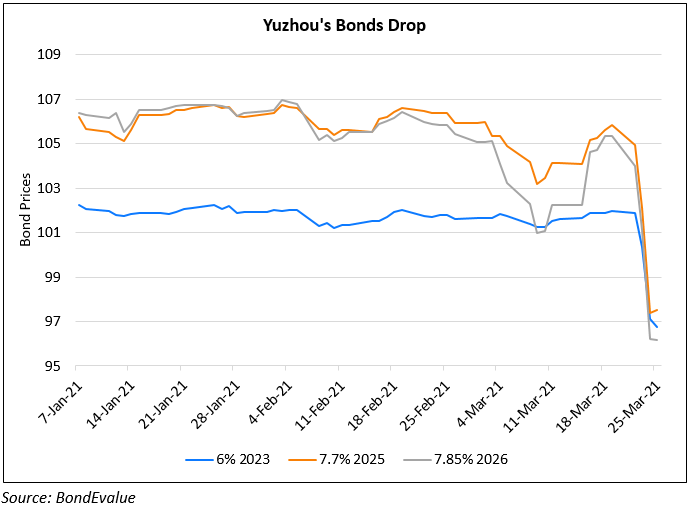 Bonds of Chinese property developers Yuzhou and Central China Real Estate (CCRE) fell on Wednesday. Yuzhou’s dollar bonds fell 4-5% after it was downgraded by Moody’s to B1 from Ba3 with its outlook cut to negative from stable. Also, its senior unsecured rating was downgraded to B2 from B1. Post China Fortune Land Development’s (CFLD) defaults, “Yuzhou’s downgrade is likely to deepen investor worries toward the financial health of high-yield developers,” according to Bloomberg Intelligence analyst Daniel Fan. Yuzhou’s profit warning may also have an impact on other developers facing declining sales, he said. Bloomberg cites Nomura’s analyst Iris Chen in a report that states “We suspect that Yuzhou will need time to restore market confidence…We don’t advocate buying-on-dip at this stage until the actual [2020] results are out.” Besides Yuzhou, peer CCRE’s 7.25% 2024s fell 3.4% yesterday to 90.3.