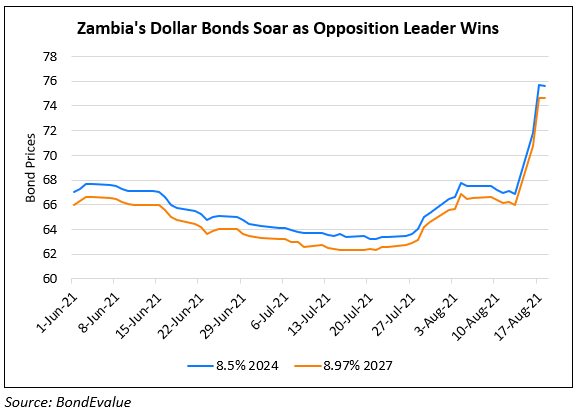 Zambia’s dollar bonds rallied on Monday after opposition leader Hichilema beat the incumbent President Edgar Lungu by a strong margin of ~1mn votes during the Zambian Presidential elections. The new president elect is widely expected to spur economic growth and has pledged to accelerate talks with the IMF to secure funding required to reduce the nation’s “unsustainable debt level” as per Bloomberg. The landslide victory will also allow easier policy changes. Aleix Monatana, Africa analyst at risk intelligence company Verisk Maplecroft said, “Hichilema’s first priority as president will be to implement economic reforms and to work towards an agreement with the IMF for financial assistance, which has become more likely following his victory,” while adding “An IMF bailout would facilitate the restructuring of Zambia’s debt.” Jian, a portfolio manager at Amundi said, “We do believe the cure of the bond default is one of Hichilema’s priorities, as a more market-based Zambia economy needs the bond market to partially finance its reform and growth program.”