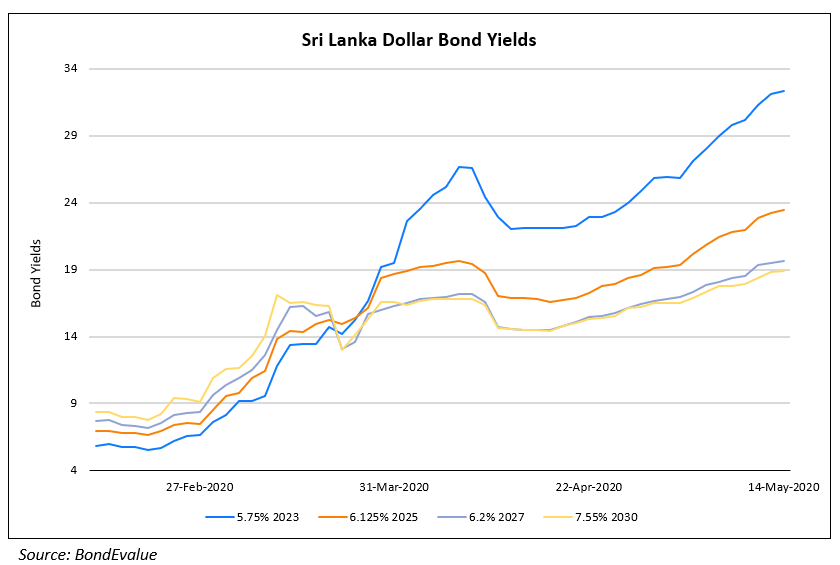 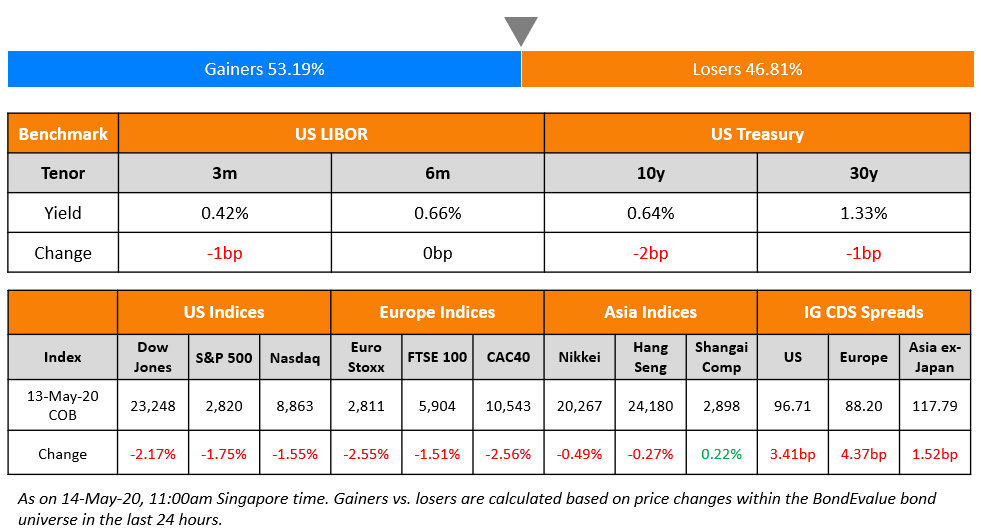 Asian markets are set to open with a risk-off tone as Wall Street saw another day of a move lower. This came mainly after Fed Chairman Jerome Powell’s surprisingly pessimistic comments warning of extended economic weakness without additional large-scale fiscal support. Additional stimulus is unlikely without bipartisan support and he also dismissed negative interest rates. This comes a day after Dr Antony Fauci, director of NIAID, warned of consequences to opening the economy too soon. Donald Trump said he was surprised by Dr Fauci’s comments and accused him of playing all sides. Angel Gurría, secretary-general of the OECD, also warned that the extra debt being taken on by already heavily indebted governments and companies to tackle the coronavirus crisis will “come back to haunt us”. Investor sentiment has also been dented by the re-emergence of trade tensions between Washington and Beijing. European markets were also lower with the DAX down 2.56% led by a 7.1% and 6.4% decline in Commerzbank and Deutsche Bank respectively after negative updates.

US and European high-grade primary market activity continued on target to smash yet another monthly record with year-to-date supply in the US at over $908bn. Europe’s primary market is closing in on an EUR 60bn week amid a flood of corporate deals. The rush adds to a marketwide deluge that has pushed 1H sales to record, barely halfway through May. Europe’s main and crossover CDS spreads widened 4bp and 16bp to 88bp and 519.5bp respectively. The US investment grade CDS spread rose 3bp overnight to 97bp. HSBC Holdings was downgraded by S&P to A- with Outlook Stable. Jerome Powell, the chair of the Federal Reserve warned that the coronavirus pandemic risked causing long-term damage to the economy and sent markets lower for a second day. The US may need to deploy “additional policy measures” to avoid an “extended period of low productivity growth and stagnant incomes”, Jay Powell said. Mr Powell’s remarks, made during a virtual event with the Peterson Institute for International Economics in Washington resurfaced concerns over the medium-term toll of the pandemic. A second wave of infections will hobble efforts to swiftly reopen economies as both China and South Korea have already seen renewed clusters of coronavirus cases. A bright spot was India’s Sensex index, which climbed 2 per cent after Narendra Modi, the prime minister, on Tuesday announced a $266bn stimulus package for the country’s economy. The recent rally in oil prices fizzled out on Wednesday even though US crude inventories posted their first weekly decline since January.

Pandemic Stimulus Debt Will ‘come back to haunt us’, Warns OECD

The extra debt being taken on by already heavily indebted governments and companies to tackle the coronavirus crisis will “come back to haunt us”, Angel Gurría, secretary-general of the OECD, has warned. Mr Gurría said: “We are going to be heavy on the wing because we are trying to fly and we were already carrying a lot of debt and now we are adding more”. He forecast that many countries’ economies would recover more slowly than initially expected from the record postwar recession that is expected in the first half of this year; it could take at least two years before many countries recover from the shock to their economies. “I am not convinced that we are going to have a V-shaped recovery,” he said. “I think it will be more like a U. The key thing is to shorten the lower part of the U . . . When you are thinking about the recovery, we don’t know whether it is going to be 2021 or 2022.” His comments echoed remarks IMF managing director Kristalina Georgieva delivered at the same event on Tuesday, when she warned the global economic outlook had darkened further in the weeks since the IMF forecast that the pandemic would cause the worst downturn since the 1930s.

In a bid to conserve liquidity, the Sri Lankan central bank has stopped local banks from declaring dividends and foreign banks from repatriating profits under a new regulation that is in place till December 2020. Share buybacks and increases in wage/allowance to management or directors have also been banned. The central bank has injected large volumes of money in to the banking system from late February before private credit fell, leading to a loss of credibility in the currency and downgrades. Sri Lanka’s dollar bond have fallen be 12-15 points over the last month. Bond yields move inversely to bond prices. 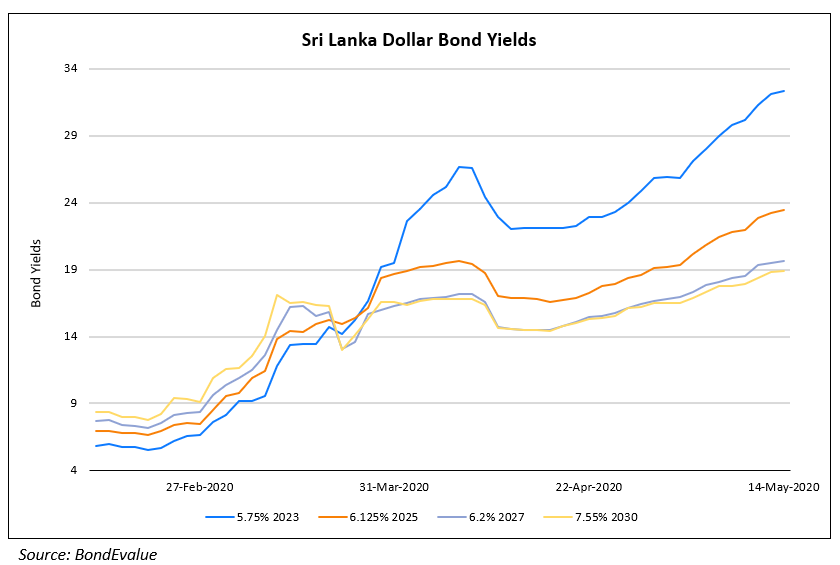 Fitch Ratings announced changes in outlook and ratings of four Philippine banks on the back of the negative impact of the pandemic. Fitch said in its report that the lockdown in mainland Luzon has weakened consumer demand affected the financial capacity of individuals and corporations. It added that the lockdown has affected ~57% of the population and 73% of the GDP, which leads to its forecast of a 1% contraction in 2020 and a sharp recovery of 7% growth in 2021. Fitch downgraded the operating environment rating for the Philippine banking sector to bb+ from bbb-. Here are the updates:

Vedanta’s Dollar Bonds Jump on News of It Going Private

We covered the news of Vedanta’s promoter Anil Agarwal launching a $2bn-plus bid to buyout the minority shareholders in Vedanta and delist its stock. The news was well received by the bond markets as its dollar bonds jumped after the announcement. 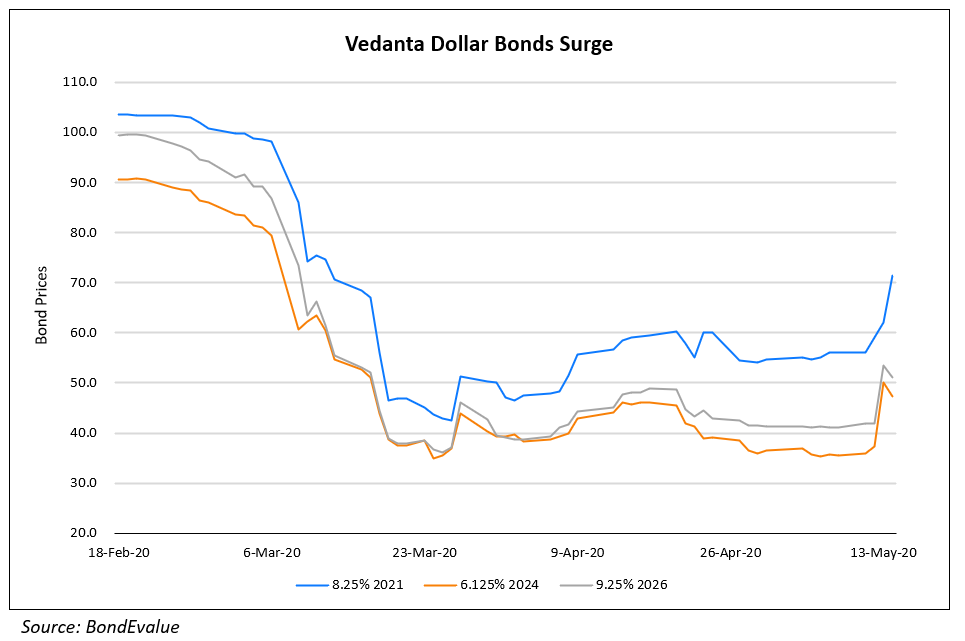 Uber Technologies Inc revealed that a $900mn bond sale is on offer. This was higher than the original plan of raising $750mn. The notes are likely to have a 5Y tenor with a yield of 7.5% with no buyback in the first two years. The proceeds are likely to be used for acquisitions and other general corporate purposes. Uber has made an offer to acquire Grubhub Inc which is a food delivery company. This would allow Uber to combine the two largest food-delivery apps in the US amid increasing home demand due to the ongoing pandemic. S&P rated the new unsecured notes at CCC+, which is 7 notches below investment grade. Moody’s rated the notes at B3, 6 notches below investment grade.

A filing on May 11 revealed that PayPal was seeking to raise $4bn. The proceeds from the issuance will be used to repay a $3bn revolver debt and for other corporate purposes included and not restricted to M&A and share repurchases. The offering is expected to close on May 18. The four tranches of $1 billion each are as follows.

Following the new issuance, Fitch affirmed its rating of BBB+ with a stable outlook for the company based on the financials of the company and the company’s strong presence in digital payments and e-commerce.

Egypt Seeks $9bn in Aid from IMF & Other Institutions

The Arab world’s most populous nation, which emerged from a sweeping IMF-backed program last year, is confronting a funding shortfall that’s estimated at about $10bn in 2020 by investment banks EFG Hermes and Goldman Sachs Group Inc. Some of Egypt’s main sources of foreign currency – tourism, remittances and Suez Canal receipts – are facing disruptions caused by the virus. Egypt is seeking more than $5bn from the International Monetary Fund under a stand-by arrangement and $4bn from other institutions, an official said. The borrowing would come in addition to the $2.8bn received this week under the IMF’s emergency Rapid Financing Instrument, part of the North African nation’s plan to cover its funding gap. Moody’s on Monday affirmed Egypt’s long-term foreign and local currency issuer ratings at B2, with a stable outlook. The country’s “economic, fiscal and monetary reforms in recent years shore up the sovereign’s credit profile in the current environment,” Moody’s said. But it noted Egypt’s exposure to potential liquidity and external financing shocks, and said that its debt affordability is weak and susceptible to a sharp rise in financing costs. In order to exploit this sector, China plans to launch a new category of bonds – “blue bonds”, an official notice has said. Currently, there is no uniform definition and standard for “blue bonds”. According to the World Bank, the ‘blue bond’ is an innovative debt financing tool that raises funds from investors through the capital market to support projects that have a positive impact on oceans around the globe in an environmental, economic, and climatic sense by promoting marine protection and sustainable use of marine resources. Blue bonds have been issued by the Seychelles in 2018 and the Nordic Investment Bank in 2019.

Qingdao Bank chairman Guo Shaoquan has said his bank will take the lead in developing a new bond sector. The Chinese government is putting a lot of emphasis on developing the ‘Blue Economy’ – linked to the world’s oceans.

Fears of a resurgence were sparked by two local cases with unknown sources recorded on Wednesday after 23 days of no community infections, taking the city’s Covid-19 tally to 1,050, with four related fatalities. South Korea has delayed reopening schools for another week and forced a second round of closures of bars and nightclubs in Seoul on Sunday after at least 119 cases were confirmed following confirmation a club-goer had the virus.

In the property market – the world’s priciest — the political deadlock is eroding demand from buyers based in mainland China, according to Simon Smith, head of research and consultancy at Savills Plc. Banks are feeling the strain, too. Loan risks loom for lenders including HSBC Holdings Plc as the city’s recession grinds on, according to Francis Chan, a senior analyst at Bloomberg Intelligence. Insurance agents and private bankers have been hurt by the virus outbreak as travel curbs blocked potential customers from the mainland. At the same time, deteriorating relations between the U.S. and China will squeeze the city’s port if trade tensions resume. As authorities take a more aggressive approach to rein in protesters with little sign of compromise to meet their demands, the unrest is expected to heat up again in coming months.

Royal Caribbean Cruises had been forced to suspend its cruise operation globally due to the onset of the global pandemic. Among the many steps taken to ensure its survival, the cruise liner has already laid off 26% of its work force in the US. It has also launched a $3.3bn bond offering on May 13 against a collateral of 28 of its ships. A part of the proceeds would be used to repay a $2.35bn short term loan to Morgan Stanley as reported by Reuters.

The cruise industry has been particularly hard hit due to the pandemic. Dr Fauci’s remarks on Tuesday on the uncertainty of the vaccine only added to the fear that the travel restrictions could continue.