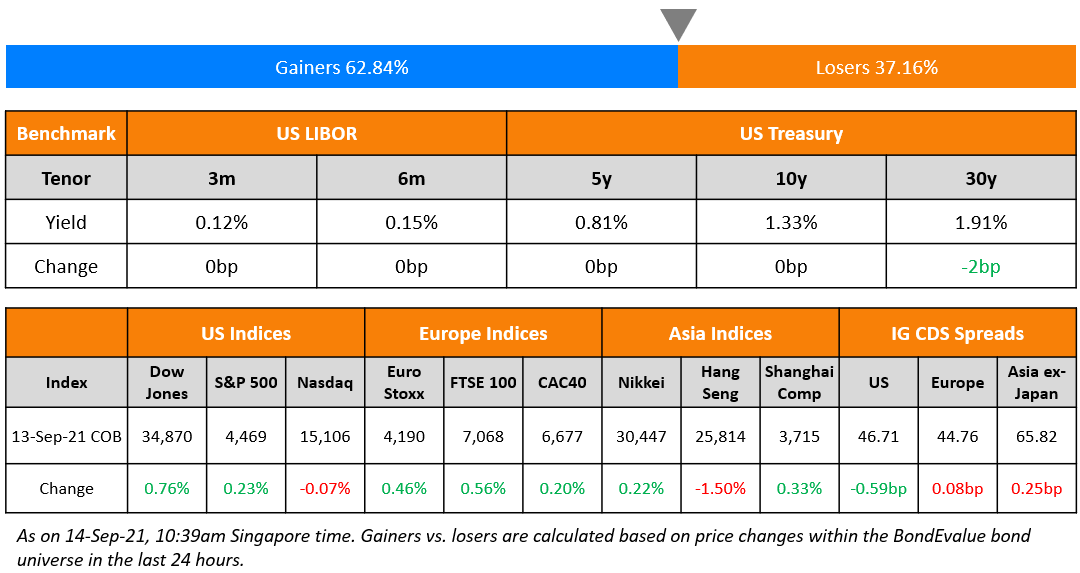 US markets ended the day mixed – S&P was up 0.2% snapping a week-long losing streak while tech heavy Nasdaq slid 0.1% lower making a fourth straight day of losses. Energy and Financials up 2.9% and 1.1% respectively stood out among the gainers while Healthcare was the prominent loser, down 0.6%. European stocks reversed some of last week’s losses – FTSE and DAX gained 0.6% each and CAC added 0.2%. Brazil’s Bovespa surged 1.9% to start the week. Major stock markets in the Gulf ended mixed, with UAE’s ADX falling 0.7% while Saudi’s TASI reversed early losses to close 0.4% higher. Asian markets have started the day in the green – Nikkei was up more than 0.6%, Shanghai and Singapore’s STI were up more than 0.3% and HSI was broadly flat. US 10Y Treasury yields were flat at 1.33%. US IG and HY CDX spreads tightened 0.6bp and 2.1bp respectively. EU Main CDS spreads were 0.1bp wider and Crossover CDS spreads widened 0.5bp. Asia ex-Japan CDS spreads widened 0.3bp. US inflation will be keenly watched out for with the CPI release due today. It’s a rather busy day for the Asian primary markets with 10 new bond deals launched this morning.
Hungary is set to tap the emerging-market sovereign dollar bonds joining Turkey and Indonesia in a busy start to the week. Meanwhile, US inflation will be keenly watched out for with the CPI release due today.

Power Finance Corp raised €300mn via a 7Y green bond at a yield of 1.841%, 30bp inside the initial guidance of MS+230bp area. The bonds have expected ratings of Baa3/BBB– (Moody’s/Fitch). Proceeds will be used for on-lending to renewable energy projects in line with “Eligible Green Projects” as per the issuer’s Green Bond Framework. This would be PFC’s first euro-denominated deal. The notes have been certified by the Climate Bonds Initiative and have received third party assurance by KPMG.

Indonesia raised $1.84bn equivalent via a multi-currency deal. It raised:

The bonds have expected ratings of Baa2/BBB/BBB, in line with issuer rating, and received combined orders over $6.7bn for the dollar tranche, 5.4x issue size. Proceeds of the dollar tranche will fund a tender for eight of Indonesia’s outstanding notes, while proceeds from the euro tranche will go to projects that will qualify as eligible SDG expenditures under the framework.

Shimao Group raised $1.048bn via a two-tranche deal. It raised:

The bonds have expected ratings of BBB– (Fitch), and received combined orders over $5.5bn, 5.2x issue size. Proceeds will be used for offshore refinancing and eligible green projects. The new 5.3NC3 bonds are priced 51bp wider to its existing 5.6% 2026s which are yielding 4.74%.

Redsun Properties raised $200mn via a 2Y green bond at a yield of 10.65%, 20bp inside the initial guidance of 10.85% area. The bonds have expected ratings of B3/B+ (Moody’s/Fitch), and received orders over $1.6bn, 8x issue size. Proceeds will be used for offshore debt refinancing.

Industrial Bank of Korea (IBK) raised $500mn via a 3Y sustainability bond at a yield of 0.639%, 30bp inside the initial guidance of T+50bp area. The bonds have expected ratings of Aa2/AA– (Moody’s/Fitch), and received orders over $2bn, 4x issue size. Proceeds will be allocated to finance and/or refinance loans that fall within eligible green and social categories under the IBK’s social, green and sustainability bond framework.

Radiance Holdings raised $300mn via a 2.5Y green bond at a yield of 8%, 0bp inside the initial guidance of 8% final. The bonds have expected ratings of B2/B (Moody’s/S&P). Proceeds will be used for debt refinancing. Asian investors bought 100% of the notes. Asset managers, fund managers and hedge funds were allocated 83%, banks and financial institutions 14%, and private banks 3%.

Huzhou Wuxing City Investment raised $200mn via a 3Y bond at a yield of 2.05%, unchanged from initial guidance. The bonds are unrated. Proceeds will be used for the construction of onshore projects and working capital. The bonds will be issued by Wuxing City Investment HK and guaranteed by the parent, which is an infrastructure construction and land development entity in Wuxing district of Huzhou city, Zhejiang province. The bonds are supported by a standby letter of credit from Bank of Shanghai Hangzhou branch.

Blue bonds are a type of sustainable debt wherein the proceeds from such issuance are earmarked for marine/water projects related to ocean conservation (hence the name blue bonds). These are similar to green bonds, which are earmarked for green or environmentally-friendly projects. Blue bonds became popular in late 2018 when Seychelles issued the world’s first sovereign blue bond. The ADB recently issued its first blue bond for ocean investments.

On Worries about Evergrande and the Property Sector

“Telling property guys to de-leverage so quickly is like telling a 900-pound guy to drop to under 100 pounds…It won’t be the obesity that kills him, but the process of losing so much weight (so quickly).”

“The property sector is under pressure and some developers are under the risk of bankruptcy…the bond market is reflecting that reality…We’re going to see more developers go bankrupt in the coming months.”

“Contagion from Evergrande to other developers will be clearer for high-yield and private debtors. The impact on state-owned developers and banks is limited as far as bond prices are concerned”

On SEC Chief Puts Corporate Bonds in Crosshairs for Scrutiny

“This market is so critical to issuers…It is nearly 2.5 times larger than the commercial bank lending of about $10.5 trillion in our economy….I’ve asked staff for recommendations on how we can bring greater efficiency
and transparency to the non-Treasury fixed income markets”

On the US Debt Ceiling Issue

“The downside is so great that conventional wisdom [suggests] that Congress will not impose this self-inflicted wound on the US economy, especially in the middle of a pandemic.”

“It feels like the movie we’ve all seen before and it is getting pretty old…This is something we see every two years and people are catching on that this is showmanship and political posturing.”

“The plan to issue several bonds, in both euros and dollars at once, is quite bold, but considering the state of the market, the issuance will be successful”. 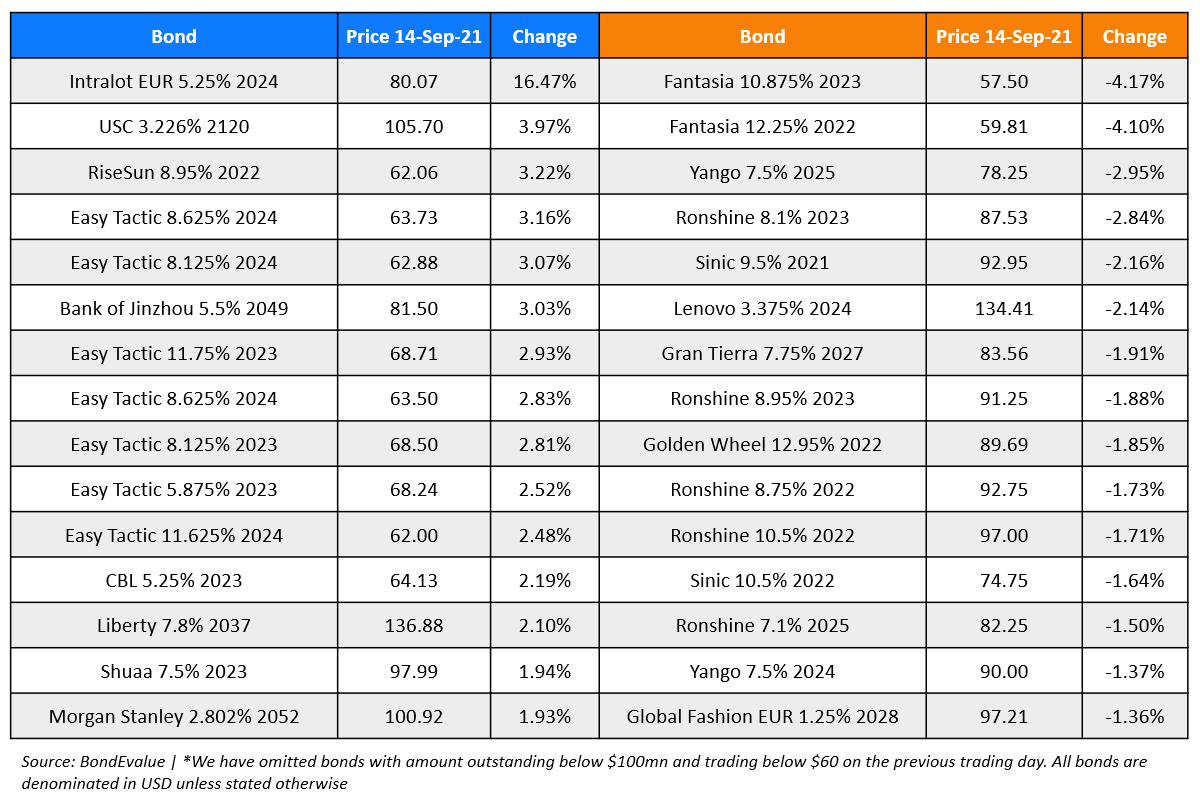