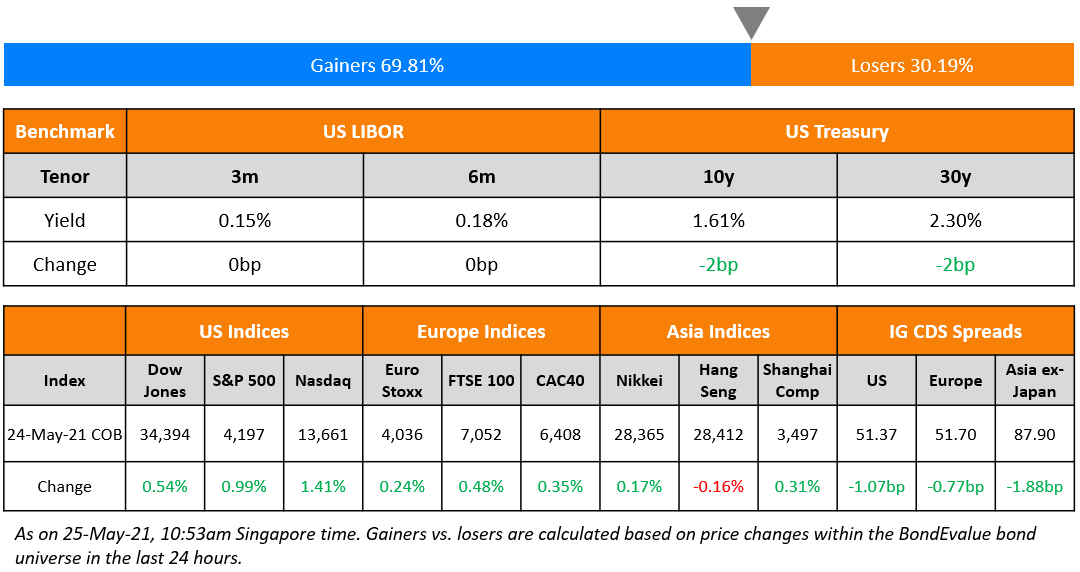 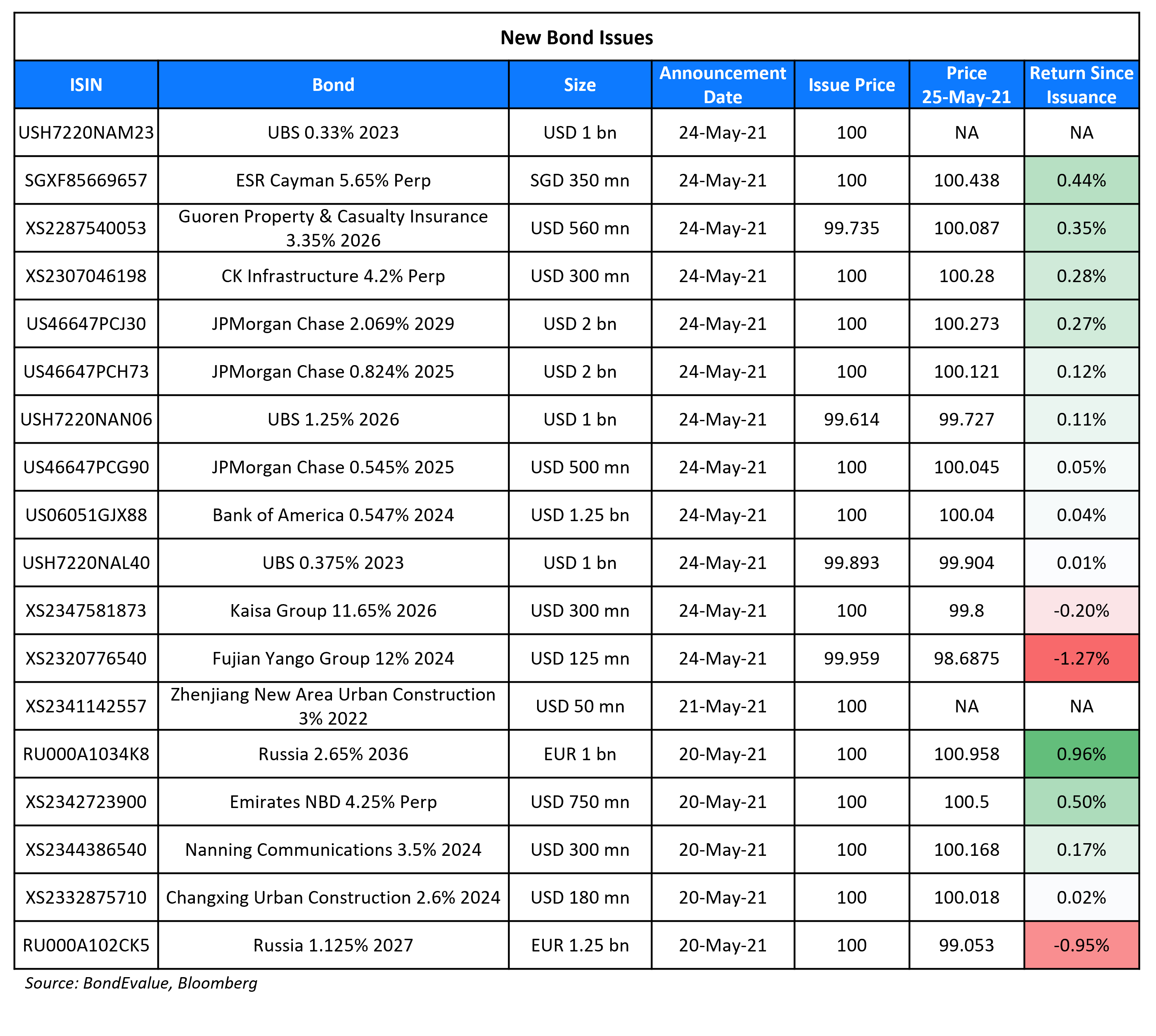 JPMorgan raised $4.5bn via a three-trancher. It raised:

UBS raised $3bn via a three-trancher. It raised:

The bonds have expected ratings of Aa3/A+/AA-. Proceeds will be used for general corporate purposes.

ESR Cayman raised S$150mn ($113mn) via a tap of their S$ 5.65% Perpetual non-call 5Y (PerpNC5) at 100/5.64%, unchanged from initial guidance of 100 area/5.64% YTC. The bonds are unrated and received orders over S$210mn, 1.4x issue size. If the notes are not called, the coupon will reset every five years to the 5Y SOR + initial spread of 473bp along with a coupon step-up of 200bp. Proceeds will be used for refinancing debt, financing potential acquisition and investment opportunities, working capital requirements and general corporate purposes. There is a 25 cent rebate for private bank orders.

CK Infrastructure raised $300mn via a fixed-for-life Perpetual non-call 5Y (PerpNC5) at a yield of 4.2%, 30bp inside initial guidance of 4.5% area. The bonds have expected ratings of BBB, and received orders over $1.2bn, 4x issue size. There is a 20 cent rebate for private bank orders. This is CK Infra’s first dollar bond issuance since 2017. As per IFR, CK Hutchison holds a 71.93% stake in CK Infra and this is the first USD fixed-for-life offering in Asia since sister company CK Asset sold a $300mn PerpNC3 in September last year.

Fujian Yango Group raised $125mn via a tap of their 12% 2024s at a yield of 12%. The bonds have expected ratings of B-. Yango (Cayman) Investment is the issuer and Fujian Yango Group is the parent guarantor. Proceeds will be used for offshore debt refinancing and the development of its education business.

On the expectation that pricing pressures will subside over time – Lael Brainard, Federal Reserve Board Governor
“We’re in the middle of a pretty unprecedented rebound in the U.S. economy,” Brainard said.
On the expectation of little long-term impact from inflation spike – Andrew Bailey, Bank of England Governor
“The Monetary Policy Committee judges that these transitory developments should have few direct implications for inflation over the medium term,” Bailey said.
On the caution against dismissing risk of inflation surge – Esther George, Kansas City Federal Reserve President
“I am not inclined to dismiss today’s pricing signals or to be overly reliant on historical relationships and dynamics in judging the outlook for inflation,” George said. “The structure of the economy changes over time, and it will be important to adapt to new circumstances rather than adhere to a rigid formulation of policy reactions,” she said. “With a tremendous amount of fiscal stimulus flowing through the economy, the landscape could unfold quite differently than the one that shaped the thinking.”
On choosing to invest in bitcoin over bonds – Ray Dalio, founder of Bridgewater Associates
Dalio said the economics of investing in bonds “has become stupid” because they pay less than inflation. “I have some Bitcoin,” Dalio said. Bitcoin’s “greatest risk is its success.”
On Libor replacements multiplying in shift that could fracture markets
Mark Cabana, head of US interest-rate strategy at Bank of America Corp
“While there was a big push to try and have SOFR be the monolith, the market seems to have other views of the type of benchmark it would like to have for very specific transactions,” said Cabana. “Will SOFR end up being the key lending rate in the future? I don’t know. I think there are real questions around that.”
Meredith Coffey, executive vice president of research & public policy at the Loan Syndications and Trading Association
“The key thing is we’re going to be in a multirate environment,” Coffey said. “We’ve seen it. We’ve expected it. And it’s not a tragedy.”
Dave Loretta, Duluth Chief Financial Officer
“We appreciated it had a very high correlation to Libor and we could set some term portions on it, which under the SOFR arrangement it was going to be a little more complicated,” said Loretta.
Priya Misra of TD Securities
“We are concerned that it may fragment markets or decrease derivatives market liquidity.” “It is unclear how any credit-sensitive rate would behave in a credit event.” 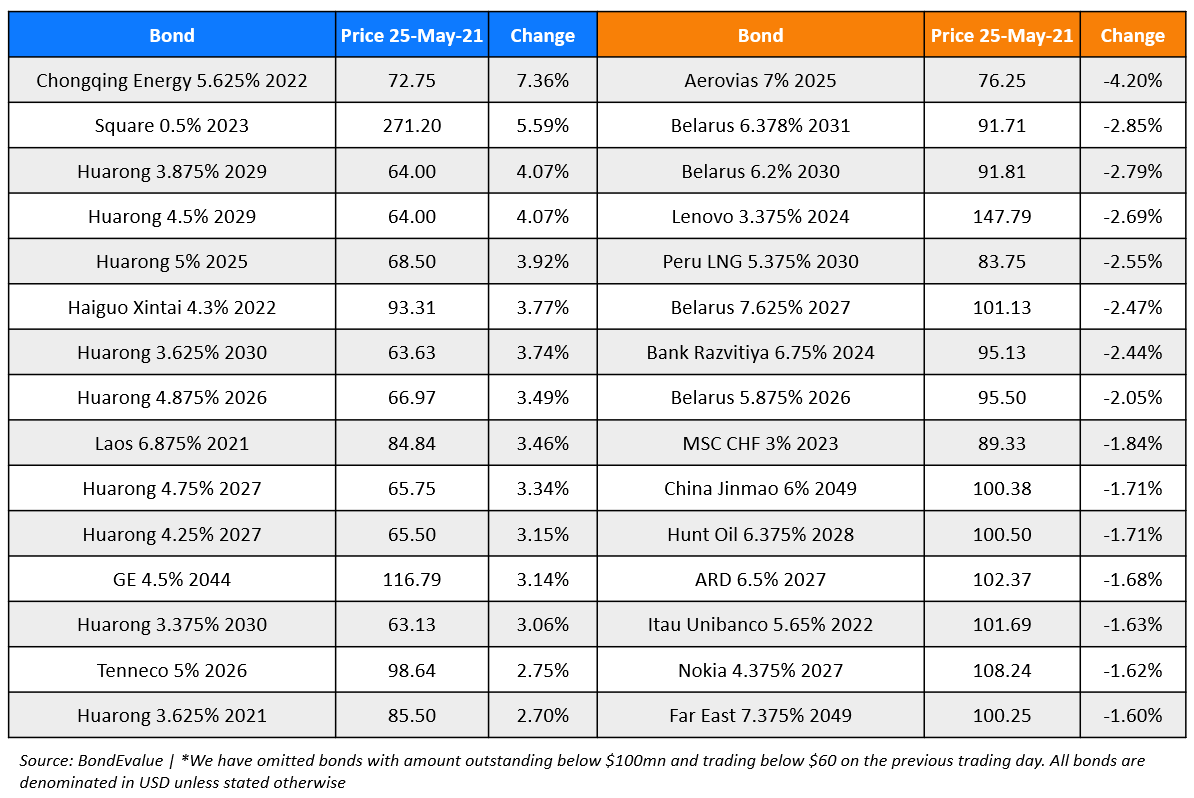