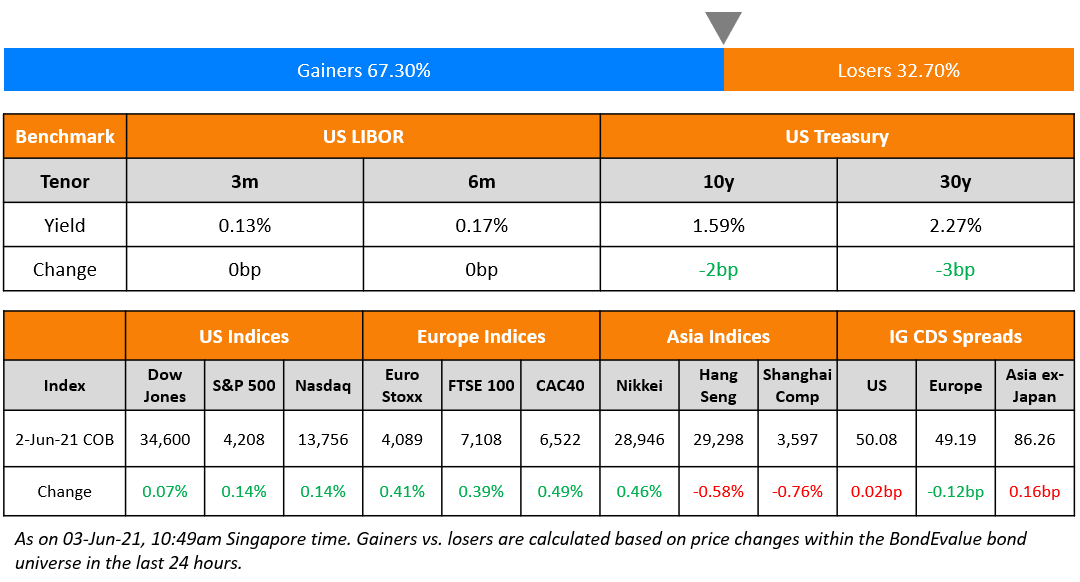 US markets inched up ahead of the weekly unemployment report and May payrolls data. Both S&P and Nasdaq were up 0.1%. The energy sector was up 1.7% followed by real estate, which was up 1.4%. US 10Y Treasury yields were tighter by 2bp at 1.59% and continued to trade in a tight range of 1.55-1.64%. European markets also moved up to near record highs with energy and consumer stocks leading. CAC closed higher by 0.5%, FTSE 0.4% and DAX 0.2%. US IG CDS spreads were flat and HY spreads were 1bp tighter. EU main spreads were 0.1bp tighter and crossover spreads tightened 1.4bp. Asian equities are off to a mixed start with Nikkei and Shanghai up 0.4%, and 0.1% and Hang Seng down 0.3% with Asia ex-Japan CDS spreads widening 0.2bp.

3 Hours to Go: Learn: How to Analyze CoCo/AT1 bonds

Do you invest in CoCo/AT1s? If yes, do attend the upcoming masterclass tomorrow being conducted by debt capital market professionals Pramod Shenoi, Head of Research APAC at CreditSights and Rahul Banerjee, Founder and CEO at BondEvalue. The session will cover the AT1 structure, common features & covenants, and how to pick the right AT1 bond(s) for you. 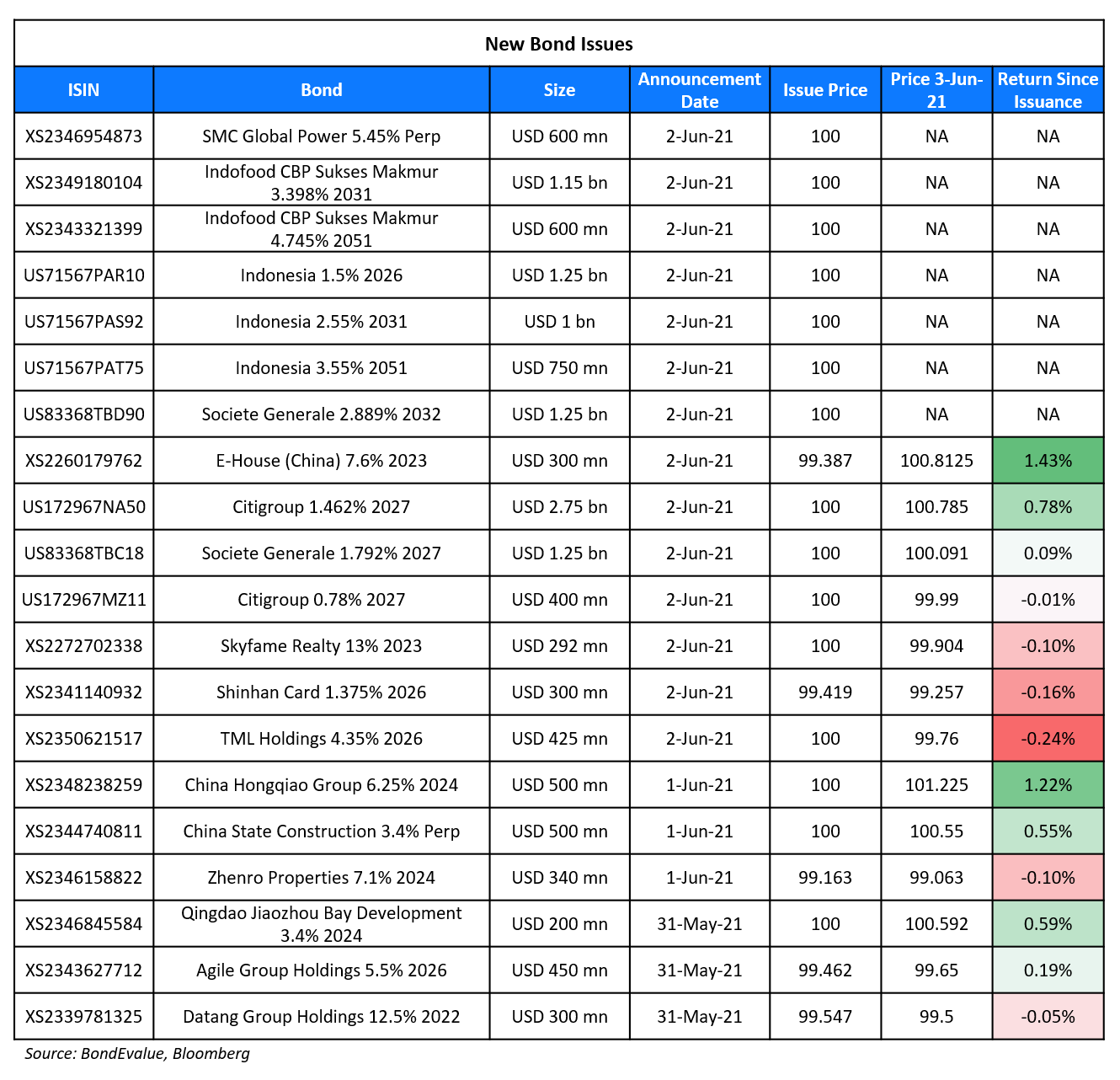 TML Holdings raised $425mn via a 5Y non-call 2.5Y (5NC2.5) bond at a yield of 4.35%, 35bp inside initial guidance of 4.7% area. The bonds have an expected rating of B in line with the parent and received orders of over $2.2bn, 5.2x the issue size. Asia bought 75% and EMEA 25%. Real money (institutional) investors were allocated 77%, hedge funds 12%, asset managers 7%, banks 2% and private banks 2%. Proceeds will be majorly used to refinance an outstanding £225m ($319m) loan and for general corporate purposes. There is a change of control put at 101, which will be triggered if Tata Motors ceases control of the issuer, or reduces its holdings to less than 51% of JLR, or if the issuer ceases control of JLR. Tata Motors (B1/B) will provide a letter of comfort for the bonds. The company last sold $300mn 5.5% 3.5NC2.5 bonds last November. TML Holdings is a wholly owned subsidiary of Tata Motors, incorporated in Singapore and is the holding company for its overseas business including JLR.

Indonesia raised $3bn via a three-trancher. It raised:

The bonds have expected ratings of Baa2/BBB/BBB. Proceeds will be used for general financing purposes, provided for the 30Y Green Sukuk, the Obligor will use proceeds exclusively to finance or re-finance expenditure directly related to “Eligible Green Projects” as defined in the Green Bond and Green Sukuk Framework.

SMC Global Power raised $600mn via Perpetual non-call 5.5Y (PerpNC5.5) bond at a yield of 5.45%, 42.5bp inside initial guidance of 5.875% area.  The unrated bonds received orders of over $2.1bn, 3.5x the issue size. Proceeds will be used to invest in its new 1,313.1MW Batangas combined cycle power plant, which will use regasified liquefied natural gas, and related facilities or for general corporate purposes. The bonds have a coupon reset to the initial spread of 465.5bp plus a coupon step-up of 250bp if not called after 5.5Y. There is a reset every 5Y thereafter. The issuance comes with a new issue premium of ~23bp over its 5.7% PerpNC6 callable in January 2026, yielding 5.22%. The issuer is a subsidiary of Philippines conglomerate San Miguel.

Sembcorp Industries raised S$400mn via a 10Y debut green bond at a yield of 2.45%, 20bp inside initial guidance of 2.65% area. The bonds are unrated and received orders over S$800mn, 2x issue size. Sembcorp said its offering was “competitively priced” with over 90% of the green bonds placed to institutional investors predominantly in the APAC region, with some participation from Europe. Sembcorp Financial Services, its wholly owned subsidiary is the issuer and is guaranteed by Sembcorp. The company last issued in June 2019 for a jumbo S$1.5bn 5Y bond to partly fund a S$2bn loan to shore up offshore engineering subsidiary Sembcorp Marine.

Shinhan Card raised $300mn via a 5Y social Formosa at a yield of 1.496% or T+70bp, 35bp inside initial guidance of T+105bp area. The bonds have expected ratings of A2 and received orders of $1.98bn, 6.6x issue size. Proceeds will be allocated to finance and/or refinance eligible social financing in accordance with Shinhan Financial Group’s sustainable development goals financing framework. APAC took 59%, Taiwan took 40% with the remaining taken by other investors. Banks and financial institutions took 47%, asset/fund managers 39%, insurers/pension funds 11% and the rest 3%. The issuer is a South Korean credit card issuer and a wholly owned subsidiary of Shinhan Financial Group.

Skyfame Realty raised $100mn via a tap of their 13% 2023 at a yield-to-put of 13%. The bonds have expected ratings of B-. Proceeds will be used for refinancing purposes.

Inflation linked bonds (aka linkers) are fixed income securities whose returns are linked to the inflation rate. The most commonly known linkers are Treasury Inflation-Protected Securities (TIPS), issued by the US Treasury. TIPS provide investors protection against inflation by adjusting the principal higher with inflation and lower with deflation, as measured by the Consumer Price Index (CPI). At maturity, investors are paid the higher of the adjusted principal or the original principal. Interest on TIPS is fixed, paid out twice in a year and is applied to the adjusted principal. As investors expect inflation in the US to inch higher in the short- to medium-term, demand for TIPS is likely to increase. Reuters reports that demand for TIPS have increased recently with inflows of $2bn during the week to May 19, which was the largest in 24 weeks as US inflation has picked up in recent months.

On the time for Federal Reserve policymakers to start thinking about slowing the pace of asset purchases – Patrick Harker, Philadelphia Fed Bank President
“We’re planning to keep the federal funds rate low for long,” Harker said. “But it may be time to at least think about thinking about tapering our $120 billion in monthly Treasury bond and mortgage-backed securities purchases.” “Our goal here is to be boring,” he said.
On the stance to buying fewer bonds from polluting companies – Jens Weidmann, European Central Bank policymaker
“If no adequate solution can be found here, the Eurosystem would have to adopt alternative measures …, for example by limiting the maturities or the amount of corporate bonds of certain sectors and issuers in the Eurosystem’s monetary policy portfolio,” he said. “And, even if we decided to limit the maturities or the amount of corporate bonds as described, we would still need an appropriate and transparent yardstick for climate-related financial risks,” he added.
On the threat of rising inflation on inflation-linked bonds
Guneet Dhingra, Morgan Stanley’s head of U.S. interest rates strategy
“Inflation risk premiums over the last 15 to 20 years have tended to move in a range and when you get to the 260 bps area, that’s roughly a peak for the inflation risk premium,” he said. “So, any move above the 260-265 bps area suggests we’re getting into the hysteria zone.”
Cosimo Marasciulo, Amundi’s head of investment absolute returns
“We have seen a peak in terms of globalisation – and that will impact inflation because production will no longer be so cheap.”
Sylvan de Bus, deputy head of global bonds at asset manager Candriam
“It is undeniable that there is an overall picture of economic recovery.”
Jorge Garayo, Societe Generale senior rates strategist
“The dichotomy between current inflation and market-based inflation expectations is even stronger than in the U.S.”
On US markets opening higher despite assurances that the current inflation upsurge is transitory
Chris Zaccarelli, chief investment officer at Independent Advisor Alliance
“Investors are stuck in the summer doldrums, with markets struggling to find direction as much of the good economic news is priced in. Inflation and job growth will continue to be debated – with the Fed and many bond market investors confident that price increases will remain temporary, while others will cast a more skeptical eye on the conversation.” “Keep a close eye on the US 10-year treasury note – as long as rates stay safely below 2% percent, then relative calm should reign in the stock markets, but a sharp rise in rates could cause a more violent rotation out of tech and communication services and into financials and materials.”
Mark Haefele, chief investment officer at UBS, Global Wealth Management
“We see energy firms as among the main beneficiaries of the broader global reflation trend, along with financials,” he said.
On ‘greenium’ shrinking as climate bond sales swell
Barnaby Martin, head of credit strategy at BofA
“There is a kind of limit to how big the greenium could get. Investors still need to make returns,” said Martin. “If there’s a lot more supply of green debt, eventually that’s going to hit technicals.”
Shanawaz Bhimji, ABN AMRO senior fixed income strategist
“If there’s not much issuance coming from sectors which offer diversification, the market is not going to pay up,” he said. “We hear from corporates it’s not purely about the concession. They really want to improve their standing within the investment community.”
On China leading global surge in green bond financing in 2021 – Christina Ng, the research and stakeholder engagement leader of Institute for Energy Economics and Financial Analysis
“Chinese financial market regulators need to take a serious look at how the country’s state-owned enterprises are using the proceeds of their green bonds.” “In other words, the proceeds are to fund their day-to-day – and not necessarily green – operations.”
On blue bonds testing Latin America’s sustainable bond appetite – Gema Sacristan, chief investment officer at IDB Invest, the private sector arm of the Inter-American Development Bank Group
“It will provide a start to create a market that can finance the blue economy.” “We really see this trend gaining momentum globally and increasingly in the region,” Sacristan said. “The main goal is to encourage Latin American issuers to use capital markets to finance sustainability-related projects.”
On emerging Asia’s worst-performing bonds set for more losses – Poon Panichpibool, strategist at Krung Thai Bank Pcl
“As the focus of the stimulus is on cash handouts instead of more business-enabling initiatives, the support to growth will be less pronounced, potentially necessitating further stimulus down the road,” Poon said. 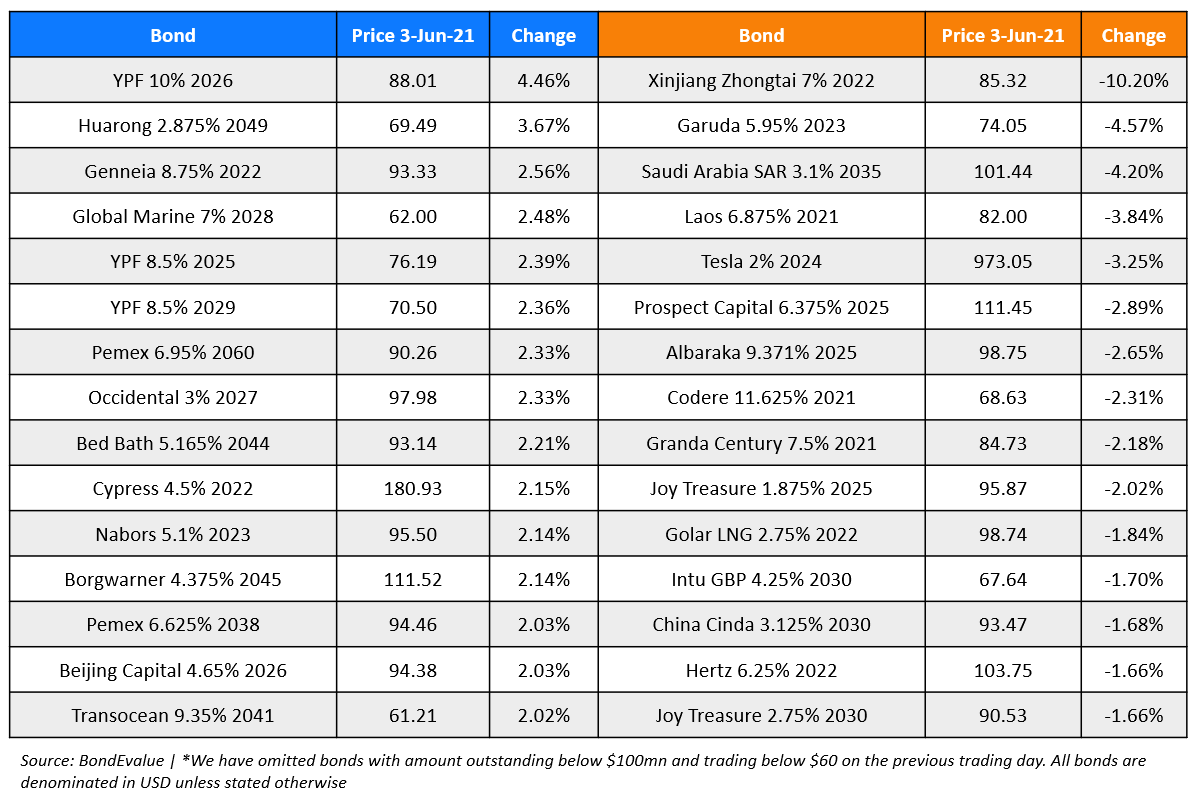