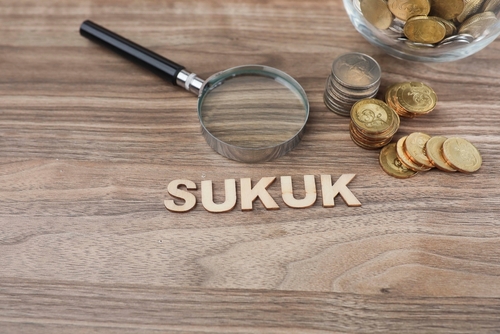 Sukuk issuances have become popular over the last five years with a major chunk coming from the Gulf nations. This article attempts to cover everything you need to know about sukuk (sukuk is both, the singular and plural).

A sukuk in its simplest form refers to a Sharia-compliant fixed income instrument. The Accounting and Auditing Organization for Islamic Financial Institutions (AAOIFI) defines sukuk as “Certificates of equal value representing after closing subscription, receipt of the value of the certificates and putting it to use as planned, common title to shares and rights in tangible assets, usufructs and services, or equity of a given project or equity of a special investment activity”.

Sukuk adhere to an Islamic view of finance or Sharia rules which avoids Riba (generating money from money, i.e. interest or usury). While they operate similar to conventional bonds, there are key differences as we will cover below.

How Are Sukuk Similar to Conventional Bonds?

Sukuk and conventional bonds are similar in certain ways:

However, there are some differences observed between these two types of securities.

How Do They Differ From Conventional Bonds?

Sukuk differ from conventional bonds in that:

Some say that the differences are merely technicalities which matter to Muslims as per the Islamic Finance Foundation. There are several types of Sukuk and they differ based on technicalities of the mode of Islamic financing or structuring. The AAOIFI identifies 14 different types of Sukuk like Mudarabah, Ijarah, Jualah, Istisna, Murabaha, Musharakah etc.

Sukuk vs. Conventional Bonds – An Example from Prospectuses

The pictures below show a comparison between a sukuk and conventional Bond of Saudi Aramco from their prospectuses.

It is believed that the first sukuk transaction was done in the 7th century AD in Syria. As per a chapter in “Handbook of Research on Theory and Practice of Global Islamic Finance”, in modern times, one of the first definitions of sukuk was given by the Council of the Islamic Fiqh Academy in 1988 shortly after which, Shell MDS Malaysia issued one of the first sukuk in 1990. After this, there were no major sukuk issues until the 21st century, which is when sukuk issuances shot up. The first dollar-denominated sukuk was issued in 2001 by the Central Bank of Bahrain raising $100mn. Ever since, the sukuk market has only grown in size. For example, since 2013, the USD-denominated sukuk market has grown at 18% CAGR across multiple issuers and a broader investor base. During the same time, the ESG market has also grown significantly, in particular the last three years which have seen record issuances across green, social and sustainability-linked bonds. Now, with the rise of ESG and sukuk related issuances, the Malaysian sovereign has been a pioneer in this field. In July 2017, they issued the world’s first green sukuk with proceeds used to finance the construction of large-scale solar photovoltaic power plants in Kudat, Sabah. 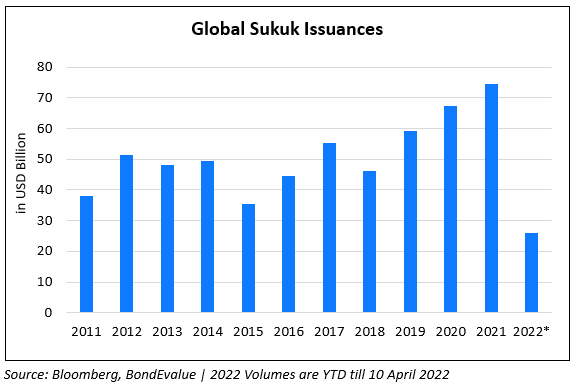 As per Statista, the South-east Asia region is the largest issuer of Sukuk by amount outstanding followed by the GCC region. As of 2021, Malaysian Ringgit denominated sukuk represented ~40% of the overall Sukuk issuances (after converting to hard currency), while dollar denominated sukuk represent about 27%, followed by Saudi Riyal 17% and Indonesian Rupiah at 10%, data from Refinitiv shows.

In 2021, the five leading countries in terms of sukuk issuance were Malaysia, Saudi Arabia, Indonesia, Turkey and Kuwait. Moreover, with the latest in boom in ESG debt, about $5.3bn of ESG dollar-denominated sukuk was issued globally in 2021, a record high as per Refinitiv.

The table below shows the 10 largest sukuk outstanding: 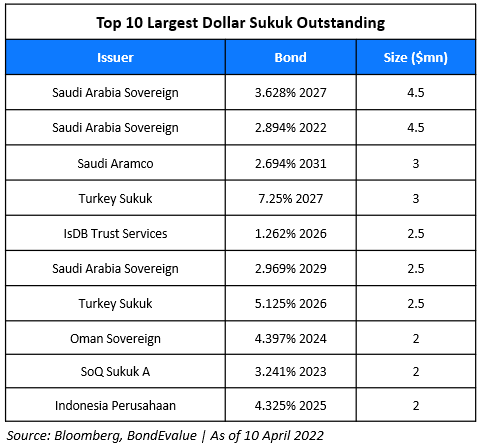 Sukuk are also issued across various sectors. As of 2021, governments were the largest issuers of sukuk, followed by Financial and Energy sectors as seen in the pie-chart below: 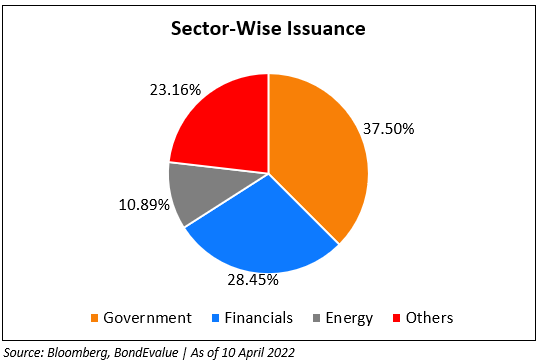 Are Sukuk Priced Any Different To Other Bonds?

This is an interesting topic to look at since both are considered to have semantic differences, while for trading purposes might be considered equivalent to each other. For example, a study in the Journal of Economic, Administrative and Legal Sciences titled ‘The risk of Sukuk (Islamic bonds) and conventional bonds: comparative study’ by Barqawi, noted that while the profit rate depends on the assets’ performance as per Islamic law, in reality, the investor receives the profit rate according to the prevailing interest rate. This means that the investors have no benefit if the assets perform well, which is not compatible with Islamic law.

With respect to whether a Sukuk trades at a higher or lower yield to a conventional bond, there have been a few studies conducted. A research article titled ‘Significant Difference in the Yields of Sukuk Bonds versus Conventional Bonds’ by M. Ariff, A. Chazi, M. Safari, A. Zarei used advanced econometric methods and noted that it was the first study to verify differences between Sukuk yields and conventional bonds. They revealed that average yields of Sukuk Treasury bonds are significantly higher than that of conventional Treasury bonds. On the other hand, investors in sukuk corporate bonds receive slightly lower returns  of about 25bp in the case of long-term sukuk. According to a study by Godlewski et al (2011), there is no definite relationship between Islamic sukuk and conventional bond yields. The study also said that while the yield of an Islamic sukuk differed from a conventional bond, the yield also does not have causal effect with each other.

Whilst perfect comparisons are difficult to find in the market, there are some examples that can be used to compare both types of instruments. The table below is a list of some comparable bonds from the BondEvalue app:

From the above, we observe that there is no conclusive evidence that a Sukuk from an issuer is priced wider or tighter to the its conventional bond.

The sukuk market has developed into a large market for sovereign and corporate financing. As some economies continue to recover from the pandemic, Sukuk issuances are expected to stay buoyant. However, rating agencies note that the significant rise in oil prices in 2022 may see Sukuk issuances stabilize. The rise in ESG debt has also led to a new avenue for issuers to issue sukuk as the market continues to grow. Overall, with the passage of time, sukuk issuances may only grow and are expected to continue to as an important form of financing for issuers.

To view details of sukuk and compare them with bonds, click here to login to the BondEvalue app