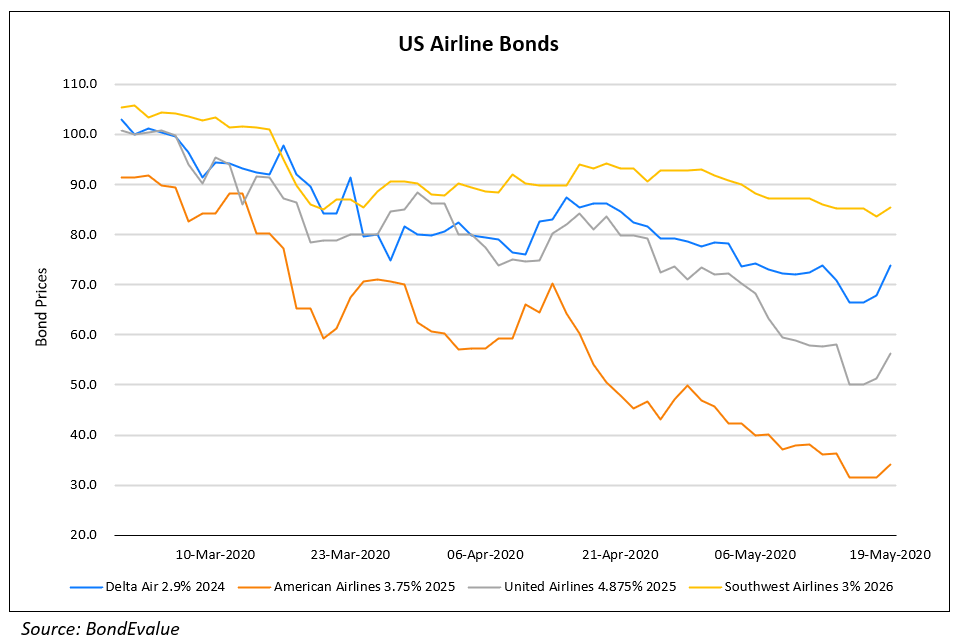 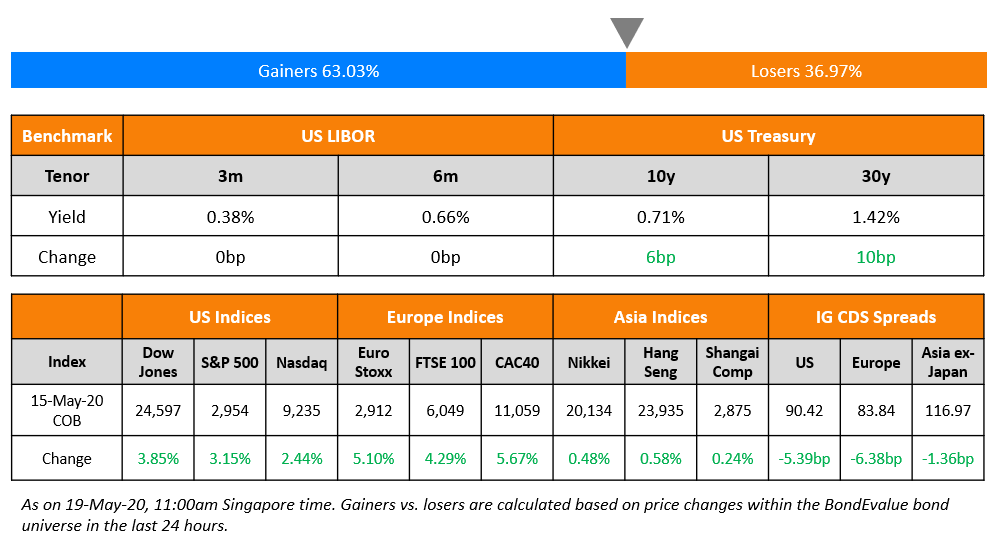 Asian markets are set to open on a strong risk-on tone as US and European equity and credit markets rallied overnight. Wall Street had its biggest gain in six weeks erasing last week’s losses. The highlight was drugmaker Moderna reporting promising results from early trials of its experimental coronavirus vaccine. Apart from this, markets seem to have digested Fed Chair Jerome Powell’s interview especially well with more focus on the prospect of further monetary stimulus if needed, rather than terrible but expected Q2 GDP numbers. Airline, Travel, Auto & Energy stocks were among the biggest gainers. Vaccine hopes dampened Treasuries’ safe haven bids.

IG CDS spreads tightened 5-6bp in US and Europe and ten US issuers including Pfizer rode the risk-on tone to price $11.7bn in the IG market. Europe saw EUR 8.4bn in deals including Continental and Richemont. Asia’s dollar bond market saw a revival this week with Chinese real estate developers such as Hongkong Land, Country Garden and Redco Properties returning to the dollar bond markets. Redco’s new issue comes along with a tender offer on its its $310.4mn 11% bonds due in August 2020. Abu Dhabi launched a tap to its dollar bonds issued in 2015, just over a month after it raised $7bn via new dollar bonds in early April.

Helping spark some investor enthusiasm, the Transportation Security Administration’s (TSA) latest data showed that for the week ended Saturday, an average of 205,010 travelers per day went through TSA checkpoints, according to a MarketWatch analysis of TSA data. While that’s down 91.5% from a year ago, it marked the fourth-straight week that the daily average increased and the year-over-year decline decreased. The rally in the sector comes with many stocks bouncing off multi year lows, and as part of a surge in the broader stock market. Among the ETF’s most active components, shares of American Airlines Group Inc. jumped 9.2%, after closing Friday at a record low; Delta Air Lines charged up 13.9%, after losing 15.5% last week amid a 5-day losing streak, to close Friday at the lowest price since August 2018; and United Airlines Holdings Inc. ran up 21.1%, the biggest one-day gain in two months, after last week’s 21.7% plunge last week ended Friday with the lowest close since December 2012. The bonds for these airlines moved as per the chart below. 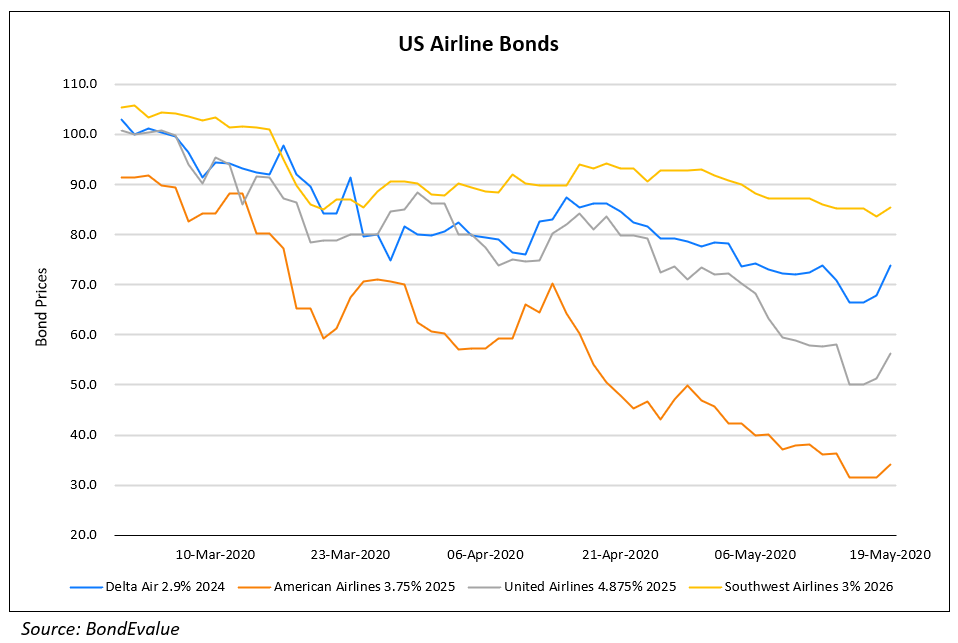 Uber Technologies Inc. sold an additional $100mn of high-yield notes on Monday, adding to an offering it priced last week. The ride-hailing company said earlier Monday that it will cut another 3,000 jobs and close dozens of offices to help shore up a business that’s suffering amid the coronavirus pandemic. The added notes were sold at par to yield 7.5%, the same pricing as the bond sold last week. The existing debt traded as high as 101.58 cents on the dollar Monday morning before falling to par in the afternoon, according to Trace data. Uber first brought the bond last Wednesday and received enough demand from investors to increase the size of the deal to $900 million, up from a planned $750 million.

Argentina’s dollar bonds rose on hopes of a new deal with its largest creditors. The country is in talks with its creditors to close a restructuring deal before the grace period ends on its $500mn overdue payments (May 22). New proposals came from a creditor group led by BlackRock, Ashmore Group and Fidelity Investments. Another joint proposal came from two groups that include Argentina Creditor Committee, Fintech Advisory, Gramercy Funds Management and the Exchange Bondholder Group. Its dollar bonds have risen by 7-11 points over the last 2 weeks.

Argentina’s state-owned oil and gas company, YPF announced cost cutting measures to shore up its balance sheet amid looming debt payments. To maintain liquidity, YPF will seek to refinance soon-to-mature debt, continue to tap local money markets, and rollover a US$1-billion bond payment due in less than a year. The company has cut salaries of some employees by 10%, people familiar with the matter told Bloomberg News. The company will also delay investments in drilling, infrastructure and refineries, and continue with divestments, said Sergio Giorgi, vice-president of strategy and business development. 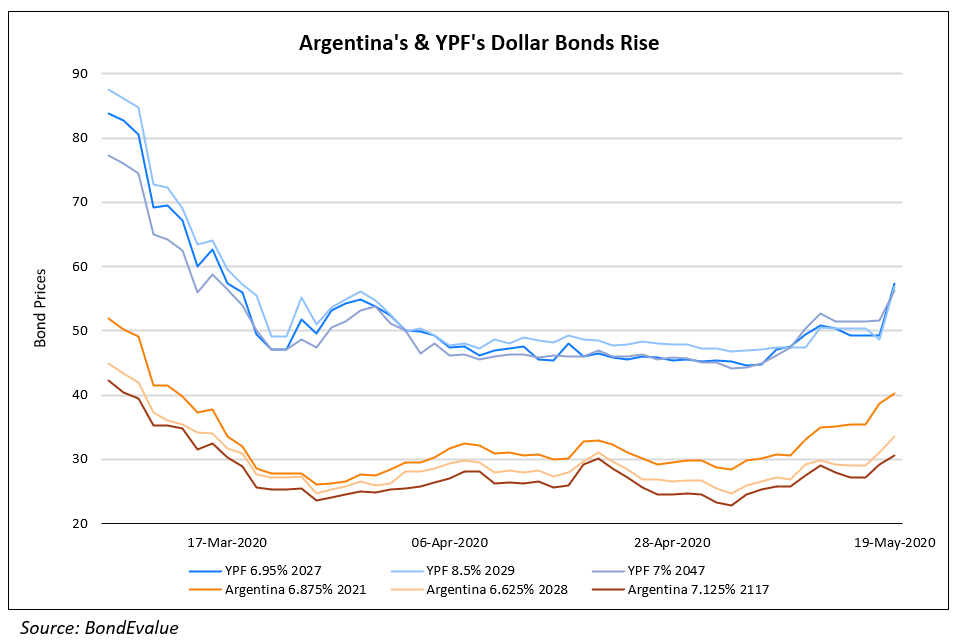 First Abu Dhabi Bank’s (FAB) $750mn 5.25% perpetuals have an upcoming call date in June. Given that the bonds are currently trading at 95, it is weighing its options on whether to call the bond or not, according to a Reuters article. Historically, banks have always exercised their call option on their Additional Tier 1 bonds. However, banks may decide not to call the AT1 bonds if market conditions change. Smaller banks from the region such as Oman’s Dhofar Bank and Bahrain’s Ahli Bank did not call their AT1s, which had a call date of April 29 and May 27 respectively. It would be cheaper for FAB to not call its bonds as based on the current reset index levels, the coupon would be reset to 3.75%, which is 150bp lower than its current coupon and 61bp lower than its current yield to maturity of 4.36%. At stake is the impact not calling the bonds will have on its investors. The Reuters article mentions quotes from some sources, one of whom said “I think the ego and the reputational ramifications are probably weighing more,” adding: “If they don’t call it, it might give a negative signal to the market.”

The bond purchases by central banks world over has been swift and has seen a large rise in the last few months. The purchases are part of central banks’ quantitative easing efforts, the result of which could be larger macro-economic effects. Sustained reliance on central banks to support fiscal policy could undermine their independence to pursue monetary policy objectives and could lead to inflation, according to a report by Fitch. The sovereign deficit and debt have grown due to the support provided by governments to the economy. The rise in debt has been accompanied with a reduced cost of borrowing, which is a positive factor for the QE measures. However, cost of borrowing is just one of many factors that go into sovereign credit ratings. The overall credit profile, another factor, is determined by the macroeconomic factors as well as the sustainability of government debt. Thus, the coordination between the central banks and governments remains vital.

Will the GCC Banks cut the Dividends?

The GCC banks index has fallen by 18.2% in the first four months of 2020. There is no danger of any downgrades as the 23 member Gulf Cooperation Council had assets worth $1.5tn at the end of 2019 and the capitalization and liquidity of the banks is strong. It is widely believed that they can take a hit of up to $36bn before capital bases start reducing. “Banks’ capitalization will continue to support their ratings. We view this crisis as a profitability event rather than a capital event. … Banks in the GCC are among the most profitable in the world,” said Mohamed Damak, senior director and global head of Islamic finance at Fitch Ratings.

A large part of the shares of these banks is owned by either the governments or the royalties. Due to the shareholding pattern, the dividends are very important to the royal families as well as the governments especially since the region has no income tax. As of April 30, the dividend yield of the bank index was ~5.16%. Even though the banks are liquid and will survive comfortably, the reduced profitability due to the pandemic and volatility in the oil prices may lead to cancellation of dividends in some cases.

“While there is an awful lot of [bond] supply that will be hitting the market, the scale of central bank purchases mitigates it. Most investors are expecting the central bank to increase its bond-buying program, even “expecting it to double or more over the course of the year,’’.

However, the central bank alone can’t get Europe through the crisis. There also needs to be an agreement reached by the European Union leaders to share the economic burden, he said, a historically controversial issue that has re-emerged as a point of pressure in recent weeks.

Gross domestic product will contract by an annualized 45% in the second quarter from the prior three months, compared with Goldman’s previous forecast of a 20% slump. A stronger rebound of 20% is now seen for the third quarter, while projections for the fourth quarter and first of next year are unchanged at 14% and 6.5%. Those estimates imply that real GDP will fall by 5% in the 2021 fiscal year, which would be deeper than any other recession India has ever experienced.

On Negative Rates in the UK – Theo Chapsalis, Head of UK rates strategy at NatWest Markets

Money-market contracts linked to the BoE’s policy rate in March 2021 and beyond have fallen into negative territory. That implies investors are positioning for rate cuts from the current level of 0.1 per cent, and possibly below zero, according to Theo. Bets on lower rates have also shown up in government bond markets, where gilt yields for maturities as long as five years are trading below zero. “It makes sense for the market to price in some probability of negative rates,” said Mr Chapsalis. “They would have to explain what’s changed and why this is now the right tool. But central banks have often adapted their policy tools to the new environment and lower rate bounds have in the past been pushed lower.”

On Possible QE in China

Mr Liu has said direct central bank buying of such bonds – or quantitative easing – could avoid the crowding out effect on financial markets and also help boost money supply, and he played down the risk of hyperinflation. Mr Liu told Reuters that he believed China should take forceful policy measures to cope with the unprecedented impact of the novel coronavirus pandemic. “This is my personal proposal. Whether it could be adopted is up to the government to decide,” Mr Liu said. “How to coordinate fiscal and monetary policy within a new framework is something that all countries are exploring. China should also explore based on its own conditions.”

“If we allow the PBOC to buy treasury bonds directly, it will be an extraordinary quantitative easing, China is still relatively far off from this step (QE), unlike the United States, Europe and Japan, where monetary policy has been exhausted.”

“We haven’t reached a stage where people don’t buy treasury bonds and the central bank must buy them directly, The key is to boost economic growth via forceful stimulus measures. We should mainly rely on fiscal policy, while monetary policy should coordinate with fiscal policy,” 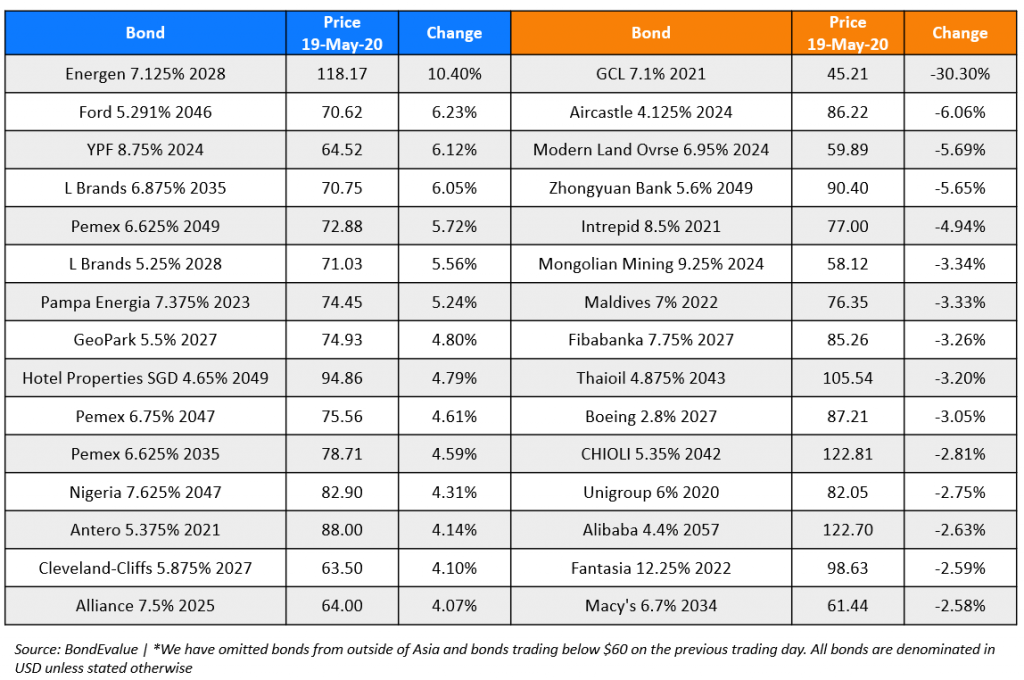