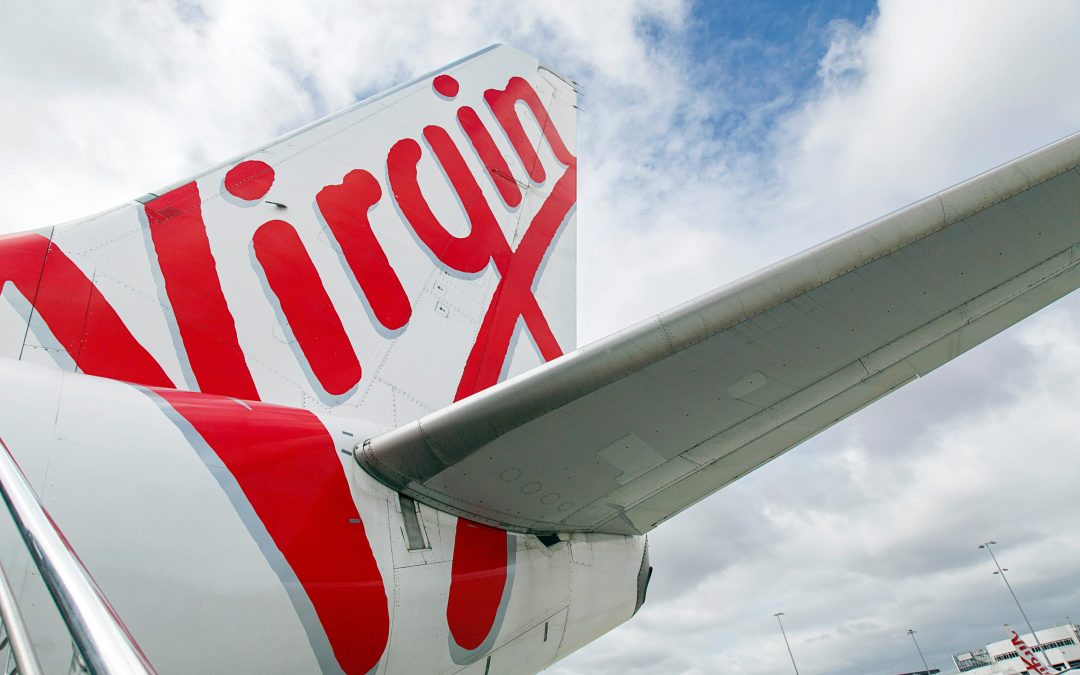 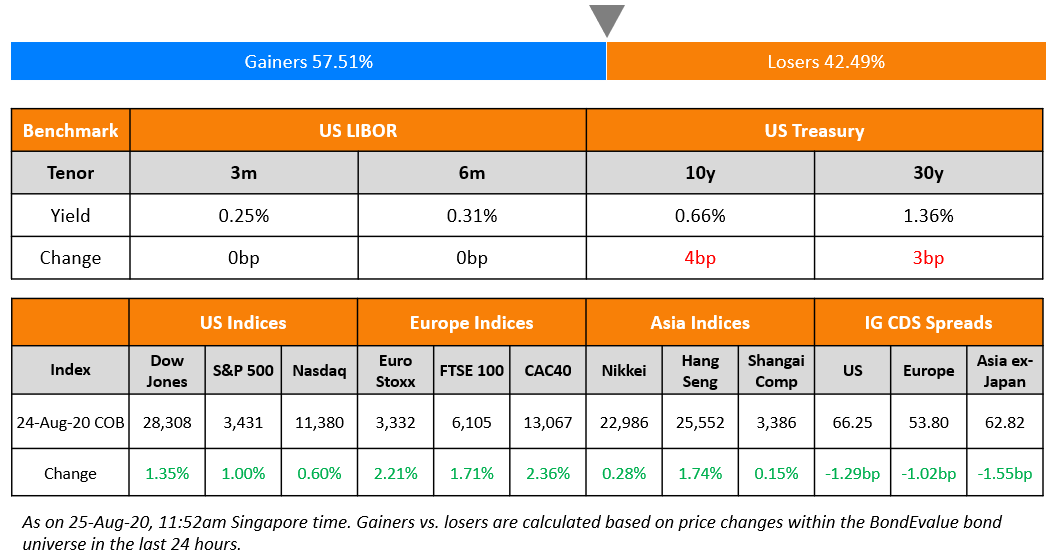 Wall Street rallied overnight as positive news regarding the treatment of coronavirus including FDA authorization of the use of plasma from recovered patients as a treatment and the fast-tracking of an experimental vaccine by Oxford University and AstraZeneca. European shares outperformed with major indices rallying around 2%. US Treasuries lost some ground and yields were higher by 1-2bp. CDS spreads narrowed a tad across the board. In the Asian primary bond market, three issuers kicked off the week and equity markets are set for gains following Wall Street. 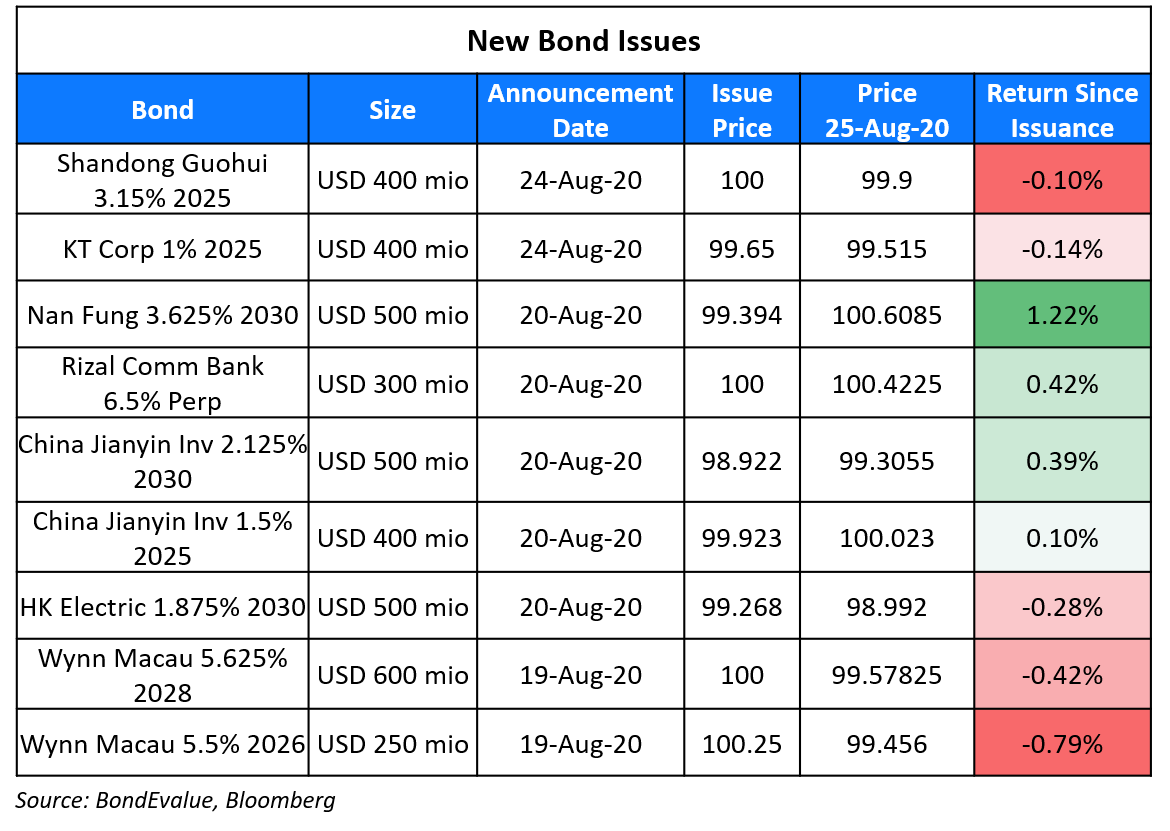 Shandong Guohai Investment, an investment company with equity in several state-owned enterprises in the Shandong province, raised $400mn via 5Y bonds at a yield of 3.15%, 55bp inside initial guidance of 3.7% area. The bonds, expected to be rated BBB+, will be issued by wholly owned subsidiary Guohai International (BVI) and guaranteed by the state-owned parent. Orders at the time of final guidance stood at $1.3bn, over 3x issue size.

Deloitte, the administrator of defaulted airline Virgin Australia, announced via a report that unsecured creditors will receive an average returns of 8.4% – 12.8%. The key features of the restructuring deal that will see Bain Capital take control of Virgin Australia are as follows:

Australia’s second largest airline, Virgin Australia had entered a voluntary administration (similar to US Chapter 11 bankruptcy) in April after a massive disruption in the travel industry.

Delta to Follow United With Bonds Backed By Loyalty Program

Delta Air Lines Inc. is planning a new debt issuance backed by its loyalty program SkyMiles, according to Bloomberg. The airline is expected to announce new bonds and loans secured by its mileage program after the US Labor Day holiday on September 7. Details of the deal terms, issue size and yield are yet to be finalized. This comes after United Airline’s successful issuance of $6.8bn of bonds backed by its MileagePlus program in June. United’s new bonds met with strong investor demand, which allowed the airline to upsize the issuance from $5bn. The bonds got an investment grade rating by Moody’s and Fitch despite the issuer’s junk rating. Delta also announced to employees via an internal memo that it will be furloughing 1,941 pilots in October as John Laughter, senior vice president of flight operations said, “The voluntary measures currently on the table just don’t move the needle enough.”

American airlines’ stocks rallied on Monday on optimism that the Trump administration would fast-track vaccines and treatment that would lead to a speedy recovery in air passenger traffic. Adding to the positive sentiment, the Environmental Protection Agency granted American Airlines emergency approval to use a surface coating that kills the coronavirus for as many as 7 days, which is expected to boost public confidence in flying. While Delta’s 2.9% bonds due 2024 traded up slightly to 90.5 cents on the dollar, United’s 4.25% bonds due 2022 rose by 1 point to 91.8 and American’s 11.75% bonds due 2025 traded up 1.2 points to 94.7.

Struggling Indian retailer Future Retail informed via an exchange filing last evening that it has made the debut coupon payment of $14mn on its $500mn 5.6% bonds due 2025. We had reported in yesterday’s newsletter that failing to make the coupon payment would push Future Retail into the no-coupon-at-all club. The Kishore Biyani-led retailer managed to avert default at the eleventh hour, which pushed its dollar bond’s prices up by over 4 points since Monday morning to currently trade at 66.5 cents on the dollar. The struggling retailer will live to see another day as it is said to be in talks with India’s most valuable company, Reliance Industries to acquire it.

According to IFR, Pison Investments has extended its tender offer for senior unsecured, contingent and trade debt of cash strapped Hyflux and its subsidiaries to Sep 4. Pison, controlled by Indonesian businessman Johny Widjaja, said that it had received bids after the initial deadline of August 17, which is why it has extended the offer deadline. Pison had proposed to invest S$400mn ($292mn) in the company in June and creditors were invited to bid at a minimum discount of 91% on the offered debt, implying a maximum recovery of 9%. The unsecured debt included in the offer consists of:

Hyflux’s bonds remained unchanged at 7-8 cents on the dollar on the secondary markets.

Another distressed company from Singapore, KrisEnergy announced that it will be holding a third informal creditor meeting on Thursday to present a final restructuring plan that includes:

The company had applied for court protection in August last year to restructure its debt worth $598.7mn. In the last week, it has skipped the following payments:

KrisEnergy’s dollar bonds traded unchanged at ~24 cents on the dollar.

Credit rating agency, Fitch Ratings said on Monday that it expects Colombia’s economy to contract by ~7% in 2020 on the back of the pandemic, followed by a growth of 5% in 2021. Fitch added that there’s a 50% probability that the Latin American nation’s credit rating would be downgraded a notch within two years that would push it into junk territory. Colombia is currently rated BBB- after it was downgraded by one notch in April. Another downgrade would put it at the highest junk rating, BB+. Richard Francis, Fitch’s ratings director for Latin America said, “We maintained our negative outlook because of the pandemic and the renewed fall in oil prices.” and added, “When unemployment is over 20% and businesses are closing, that can hurt the economy not only this year and next, but also in the medium-term – there is a lot of uncertainty.” Fitch expects Colombia’s debt to rise to 60% of GDP, up from 45% last year and above the median 52% expected for peers.

In a shocking move, the Zambia president, Mr Edgar Lungu, sacked Denny Kalyalya as the governor of the central bank without giving any official reason. Mr Kalyala had been a former World Bank official and had urged the government to rectify its finances last week while saying that the economy could drop by over 4%. He has been replaced by Christopher Mvunga, a former deputy finance minister. Zambia is reportedly in the process of restructuring its debt worth $11bn, which is necessary to unlock the IMF loans. The sacking of the central bank head comes at a time when the the debt-ridden African nation is in talks with IMF for a bailout package necessary to avoid a default. The sacking once again highlights the the issue of independence of central banks and intervention by governments. The IMF said, “The macroeconomic stability that most developing countries have enjoyed in recent years has greatly relied on the much-improved effectiveness and increased independence of central banks” and added, “It is imperative that central banks’ operational independence and credibility is maintained, particularly at this critical time when economic stability is threatened by the Covid-19 pandemic”.

Twin bonds are a new concept announced by the German Finance Ministry on Monday as part of its plan to issue €8-12bn worth of green bonds in 2020. Under the twin bonds mechanism, investors would be able to swap green bonds issued by the state for conventional German bonds or “Bunds” issued at the same time with the same coupon, maturity and volume. The option to swap the green bonds for Bunds is particularly beneficial to large institutional investors as liquidity in the green bond market is still a fraction of the conventional bond market.

Jörg Kukies, state secretary at the finance ministry said, “From now on, the German government will issue green federal bonds every year. In this way, we are creating strong momentum towards a more robust sustainable finance market. Our innovative ‘twin bond’ approach is designed to attract new investors and issuers to the green bond market and thus act as a catalyst, channelling more investments into a greener economy.”

“We understand that we need to extraordinarily high stimulus, but we also understand that there is a limit to emerging markets and how low you can go (on rates). We are not saying that the minimum level cannot be crossed, but we are experimenting (with it) and we are saying that we must be very careful,” he said.

On investors’ simultaneous fears of both high inflation and deflation

“On the one hand, central banks are under tremendous political pressure to keep rates low, and governments have lost their fear of debt,” she said. “But once furlough schemes come to an end you can see a scenario where companies say ‘you can come

“Some structural disinflationary forces have been fast-tracked by this crisis, like the rise of online retail and automation,” he said.

“The activity in options markets suggests growing demand among investors for hedges against very high or very low inflation. Investors are right to be concerned, given either of these scenarios has the potential to capsize a broad recovery in assets that has encompassed everything from stocks to precious metals and government bonds.” “If you think of something that could cause everything to go down, it’s a big surprise on inflation,” he said.

“They have created a real speculative environment,” Cooperman said. “I am uncomfortable at the present time, not because of the virus, because I’m focused on something the market isn’t focused on. And that is the amount of debt that’s being created. Who pays for the party when the party is over?”

It took the U.S. “244 years to go from zero national debt to $21 trillion,” he said. “We will probably end this year with $27 trillion. That’s a growth rate in debt far in excess of what the economy is growing at and I think that’s going to be a problem down the road.”

Bonds present “return-free risk and that’s what has worked in favor of the stock market.” Low interest rates “are indicative of a problem economy. We have had artificial support for the economy since 2008. I don’t look at that as being a positive.”

On investors ramping up bets against bonds in the ETF market – Ihor Dusaniwsky, head of predictive analytics at S3

The week delivered “a marked increase in fixed income short selling,” wrote Dusaniwsky. “Short sellers may be thinking that the yield curve has bottomed out in the short term and may be trending higher, causing the prices of the ETFs bond holdings to decline.”

“Should central banks be forced to have a less dovish stance and turn more neutral, this would cause a sell-off in the short and belly of the curve,” said Sambor. “The rally is behind us in our opinion.”

“Investors around the world are asking, to the extent there’s an enormous amount of stimulus, at what point does that become inflationary?” said Bell. “We are watching inflation very closely.” 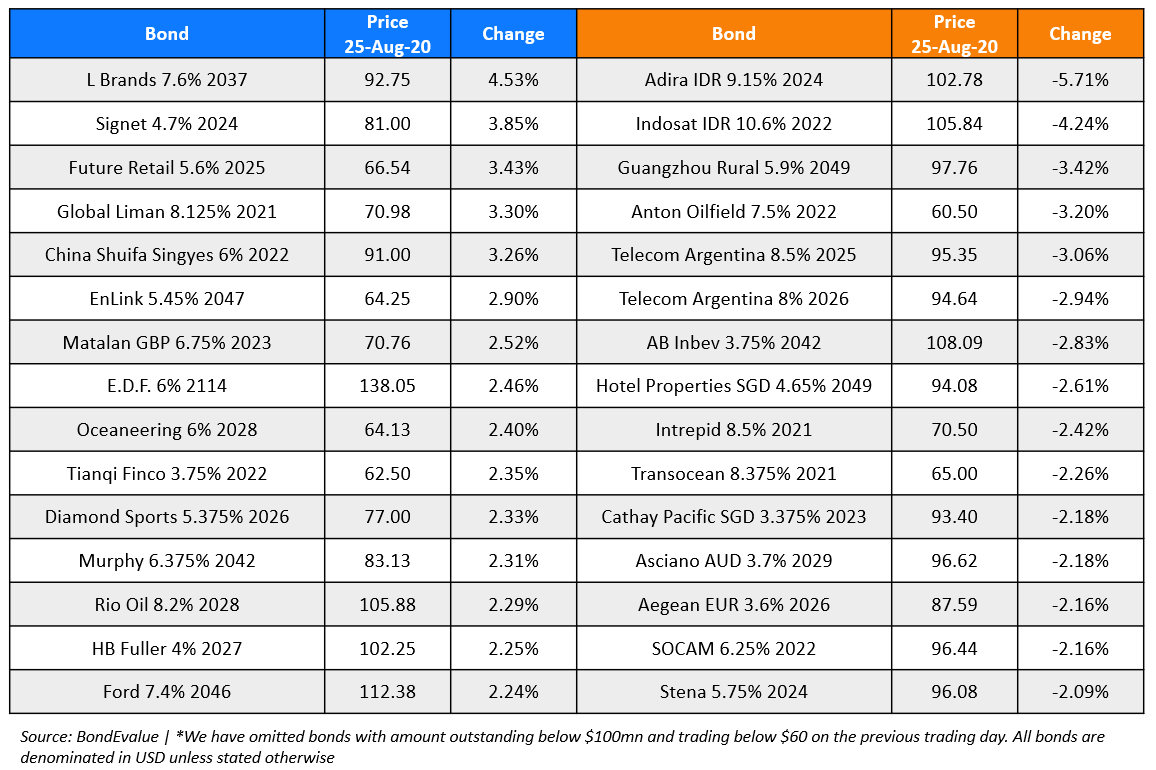