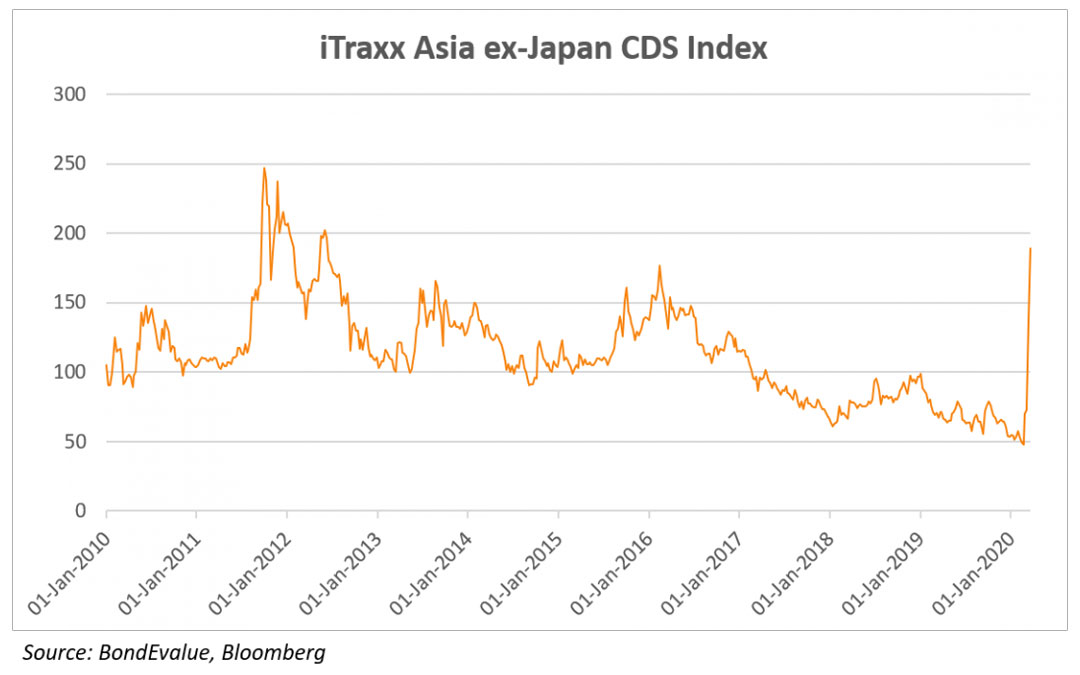 No Confidence has been instilled. The last few weeks have seen central banks cut rates, announce buy-backs, fiscal stimulus, helicopter money. They have made these moves in a coordinated manner, singly, in scheduled meetings and in unscheduled meetings.

As yet another brutal week for the bond markets draws to a close, the IG credit spreads are springing higher and almost reaching the peaks of the last two blow-ups in 2013 and 2016. Investors have been facing margin calls and a dire lack of buyers which don’t permit them to liquidate their bonds. When bids were received they were often 3-4 points away.

The market has been actively trying to predict the shape of the recession, V, U, L and I are being debated. Unfortunately, all the measures about flattening the curve for the Covid -19 virus, steepens the fall in the real economy.
In early deals, the Kospi benchmark has jumped 3.3 %, the Australian benchmark S&P/ASX 200 is 4.2% higher with the MSCI Asia Pacific ex-Japan index up 2.6%. Overnight, the Dow Jones Industrial Average climbed 0.95%, the S&P500 added 0.47% and the Nasdaq Composite jumped 2.3%.

The ECB’s $820 bln bond-buying program provided little respite to markets as cost of credit default swaps rose. The Markit iTraxx Asia ex-Japan Index of CDS rose 10 bps to about 160 bps, the highest level seen since 2016, according to data compiled by Bloomberg. On the week, it is up 31 bps after a 52 bps surge last week. 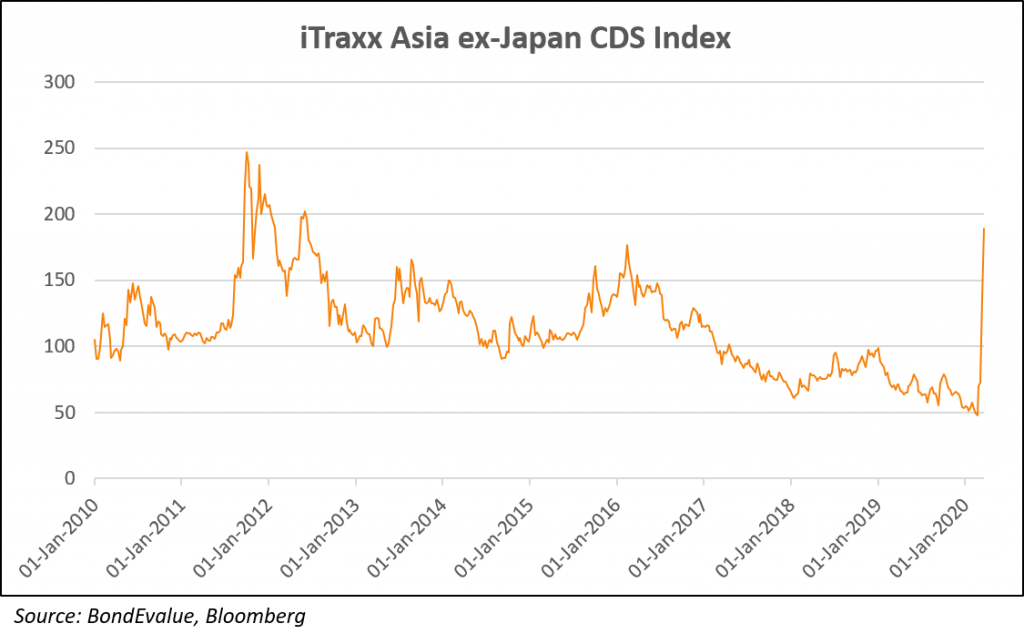 CoCo bonds continue their slide in the last few days. Contingent convertible bonds were invented after 2008 financial crisis as a way of protecting taxpayers from further bank bailouts. They are designed to pay attractive fixed coupons until an agreed trigger event such as a breach of capital requirements occurs or a regulatory imposition is made. Under these circumstances the CoCos automatically convert into equity or are written down. Below table shows how some CoCos have fared since 17 March.

To see how prices of CoCo bonds are affected by their next Call Date and Reset features, have a look at this article featured by BondEvalue.

Chinese dollar bonds decline continued on Thursday led by indebted property developers as markets across the globe face more strain. These losses have led to margin calls for some investors who funded their purchases with borrowed funds. China Evergrande Group’s 12% 2024 bond plunged from 82 to 62 in the last few days. Chart below shows some of the biggest movers of recent. 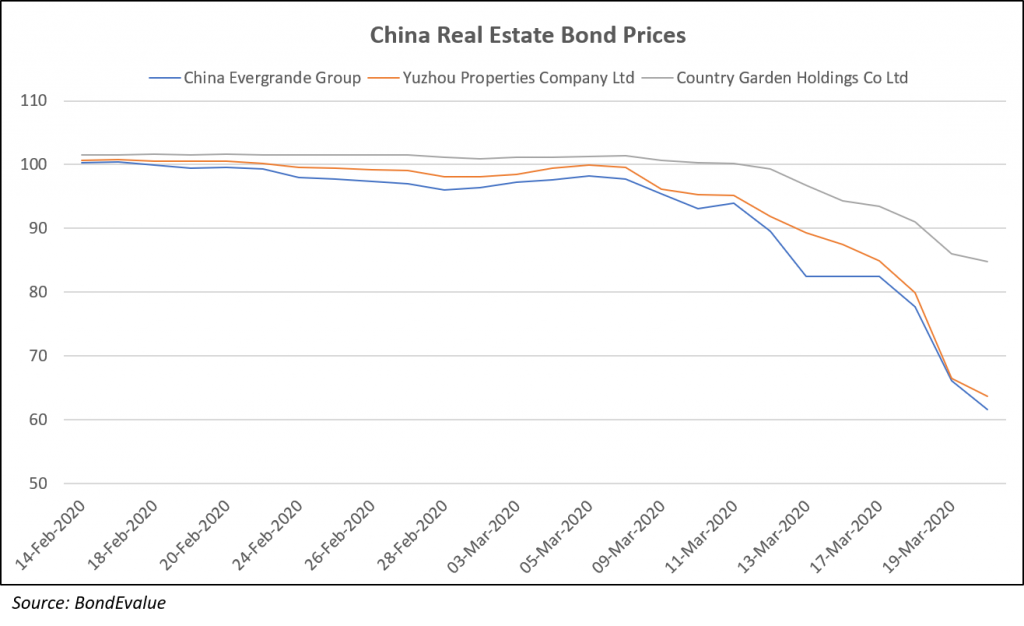 Medco to Buy Back $3m worth of Shares amid Market Rout

Following a regulation by the Indonesia’s Financial Services Authority (OJK) that relaxes share buy backs, oil and gas company PT Medco Energi Internasional plans to buy back 1% of its shares and allocating $3m towards this. The OJK has allowed share buybacks without a prior shareholders meeting and limited share drops to 7% instead of 10% on the IDX, as well as scrap pre-opening trading to safeguard the domestic market from steep drops.
For the full story click here.

Adani Abbot Point issuer rating cut to BB+ from BBB- and placed on creditwatch negative by S&P. The company postponed refinancing of debt due over the next 18 months due to tough markets. 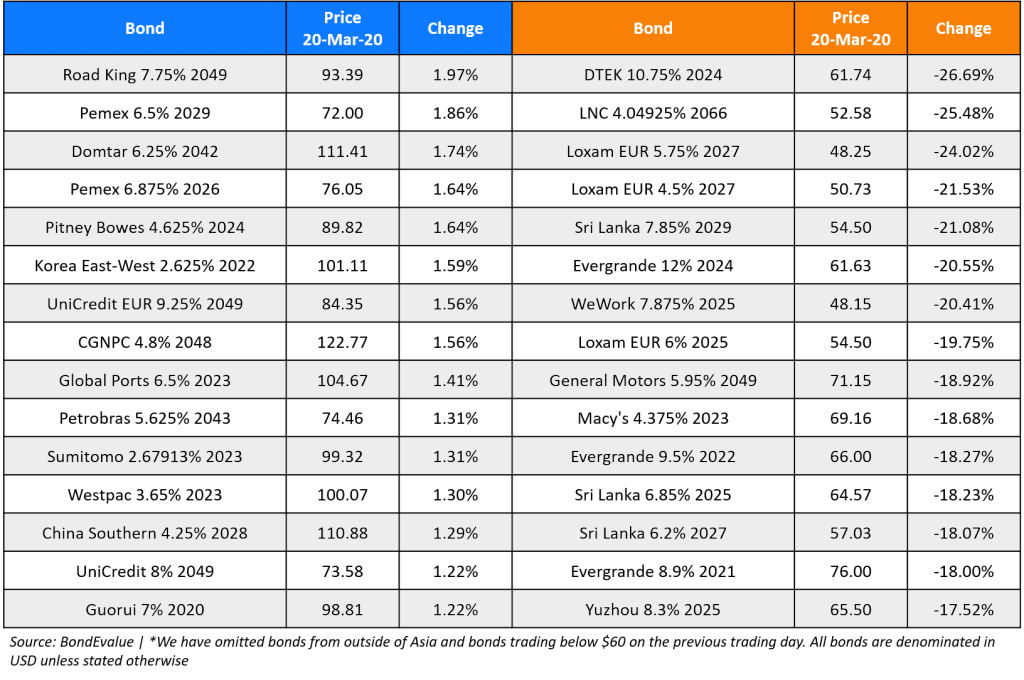 The massive gyrations in the global bond markets and the ongoing credit crisis in India are forcing money managers to seek liquidity in government bonds even as they eye top-rated corporate paper trading at high spreads to the sovereigns.
Tata Asset Management Ltd., Canara Robeco Asset Management Co. and Edelweiss Asset Management Ltd. are preferring top-rated paper issued by state-run firms as the spreads over similar-tenor sovereign remain attractive. The view on what sovereign bonds to buy remains more diverse with Canara Robeco favoring the short-end, while Edelweiss likes the 10-year plus segment.
The spread of three-year AAA-corporate paper over a similar tenor government bond stood at 105 basis points on Wednesday after widening to 109 basis points a day earlier, the highest since October, Bloomberg data showed. The gap for the 10-year company debt was at 117 basis points, the highest since mid-November.

Record amounts of money have been pulled from the world’s investment funds in the current market turmoil, putting global asset managers in the eye of the storm and challenging an industry struggling to navigate the end of a record-breaking bull run.
Mutual funds and exchange traded funds that invest in bonds suffered $109bn in outflows for the week ending Wednesday, a new record that also included the highest-ever weekly outflows for specialist junk bond and investment-grade corporate bond funds. Equity funds shed $20bn, the second-highest sum this year, on top of the record outflow of $23bn in the first week of March, according to the data from EPFR Global.
While investors often ditch riskier assets in moments of turbulence, such as equities and junk bonds, the exodus even from investment-grade corporate debt and sovereign bond funds underscores the extent of a rush toward cash that has been blamed for some of the biggest market moves of recent days.

Victor Li Tzar-kuoi, the elder son of Hong Kong’s richest man, said the two flagship companies founded by his father nearly seven decades ago are financially adequate to survive and thrive in the city’s worst economic slump in decades.
CK Hutchison, which owns businesses from chemists and supermarkets to ports and mobile phone networks, posted a 2 per cent increase in 2019 net profit to HK$39.83 billion (US$5.13 billion). Underlying profit at CK Assets, one of the city’s largest property developers, jumped 19 per cent to HK$28.7 billion, helped by a real estate bull run in the world’s costliest city.
“Our group was built, and [grew strong] through various rounds of storms, and we are used to turbulence,” Li said during an online press conference to announce the two companies’ results. “We are generally conservative with our finance, which means whenever there are difficult times, we stay well-capitalised.”
All eyes are on Li, 55, as he steers one of Hong Kong’s most renowned companies through a pandemic that has sickened more than 200,000 people and killed 8,845 in 150 regions and countries. The last time Hong Kong’s economy caught a similar slump from a pandemic in 2003, Cheung Kong’s reins were in the grips of an entrepreneur dubbed “Superman Li” for his deal making prowess.