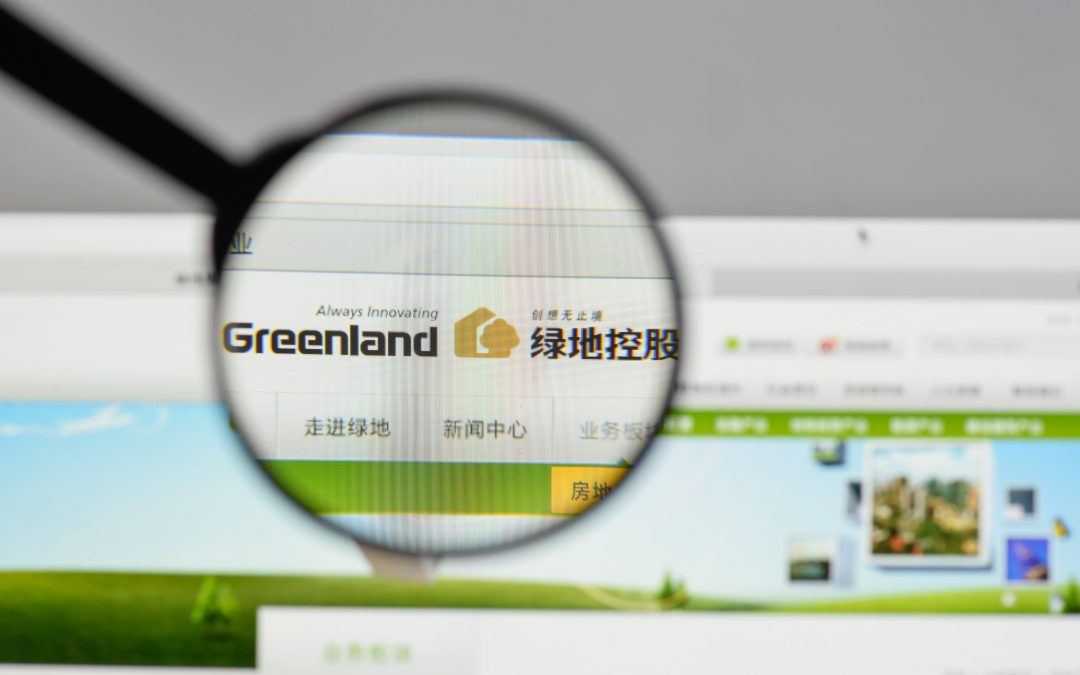 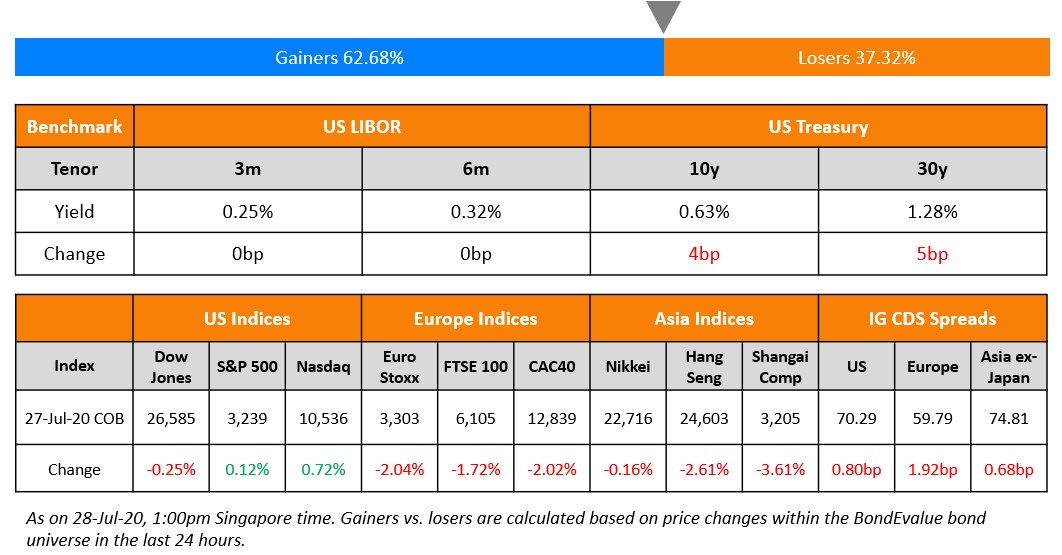 Wall Street rallied on expectations of a congressional approval of further stimulus and a dovish Fed this week. The new package of $1tn, which is in the works still has some opposition from fiscal conservatives as well as the Democrats who passed a $3tn plan back in May. There was also news suggesting that an effective coronavirus vaccine might be available by the end of the year. US treasuries lost ground ahead of the FOMC meeting and yields were up 1-3 bps. Asian markets are opening higher this morning and a handful of Asian issuers priced dollar bonds on Monday. US issuers issued nearly $16bn worth of new bonds on Monday in the high-grade market surpassing the weekly expectation of $15bn already. Europe’s main and crossover CDS spreads widened but US and Asia ex-Japan CDS spreads were mostly unchanged. 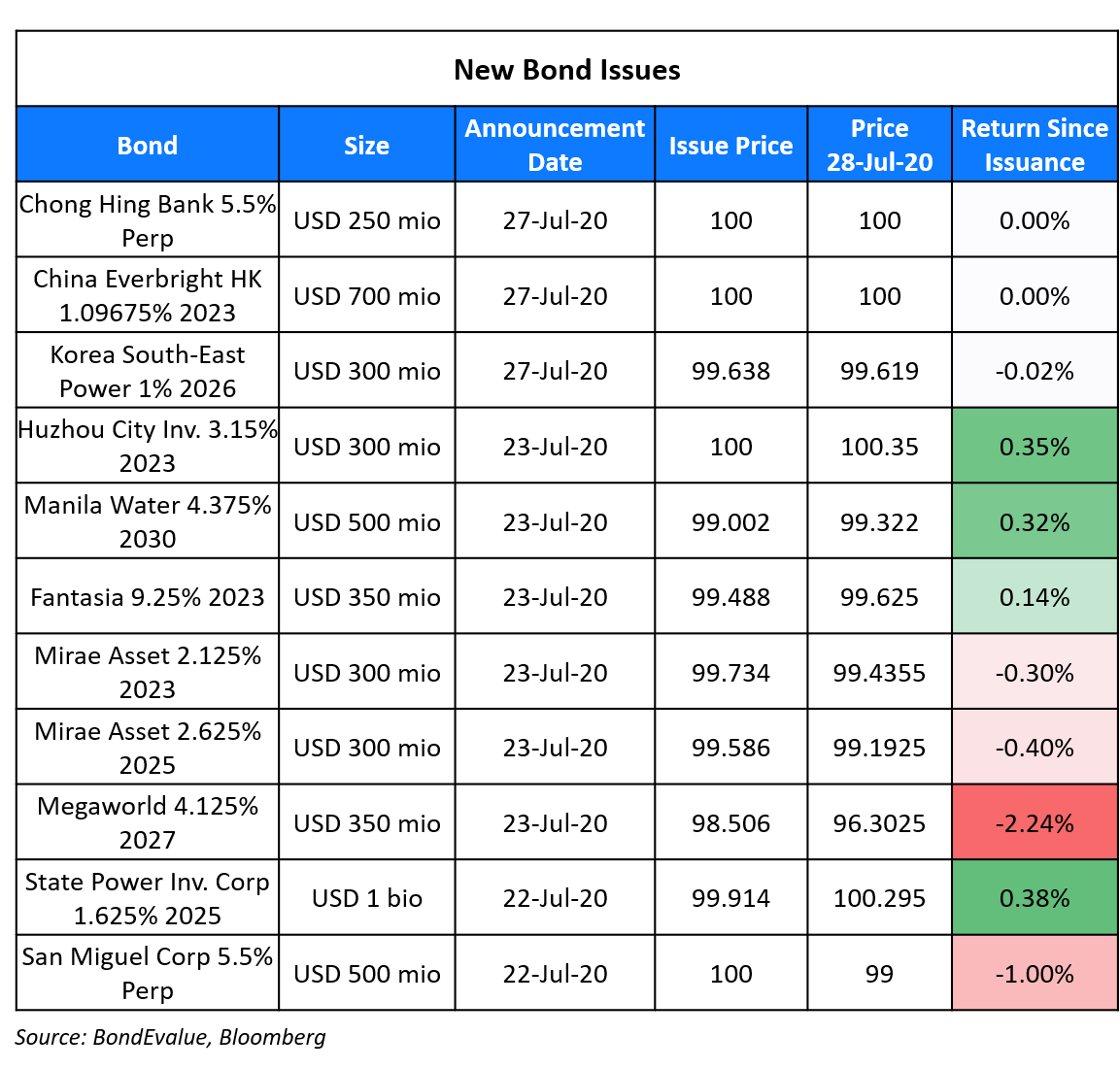 China Everbright Bank Hong Kong branch raised $700mn via a 3Y floater at 3-month Libor plus 85bp, 40bp inside initial guidance of 3mL+125bp area. The bonds, expected to be rated BBB, received orders worth $2.2bn, over 3x issue size at the time of final guidance.

Chong Hing Bank raised $250mn via perpetual non-call 5Y (NC5) Additional Tier 1 (AT1) bonds at a yield of 5.5%, 50bp inside initial guidance of 6% area. The bonds, expected to be rated Ba2, received orders worth $1.5bn, 6x issue size at the time of final guidance. The bond’s coupon will reset every five years to the then 5Y Treasury yield plus the initial spread of 523.7bp.

Korea South-East Power raised $300mn via 5.5Y sustainability bonds at yield of 1.068%, 80bp over Treasuries and 45bp inside initial guidance of T+125bp area. The bonds, expected to be rated Aa2/AA, received orders worth $2.1bn, 7x issue size. Proceeds will be used for eligible green and social projects, including to mitigate the impact of the Covid-19 pandemic.

Greenland Holdings, the sixth largest Chinese real estate developer by sales, said via an exchange filing that two of its major shareholders are planning a combined stake sale of up to 17.5%. The two major shareholders are state-owned Shanghai Land Group Ltd. and Shanghai Municipal Investment Group Corp and own a combined 46.4% in the company. The stake sale price has not been decided yet and the transaction is pending approval from the state asset regulator. Greenland reassured investors that the proposed sale will not trigger a change of control clause on its outstanding dollar bonds. This is part of Beijing’s “mixed ownership reform”, which encourages state-owned firms to divest in order to bring in new investors with the hope of making the companies more efficient. Daniel Fan, a credit analyst at Bloomberg Intelligence said, “The stake sale has raised uncertainties over the new shareholders. There can be a potential negative impact on the rating for Greenland if the buyer turns out to be a non-SOE rated lower than BB-.” According to the exchange filing, trading in Greenland’s shares was halted urgently on July 20, and then resumed only yesterday to avoid sudden movements in its price. Greenland’s recently issued 6.125% and 7.25% bonds due April 2023 and January 2025, which priced on July 15, fell by ~2 points each to 98.8 and 98.5 respectively on the secondary markets.

The IMF Executive Board approved SDR worth $4.3bn in emergency financial assistance to South Africa under the Rapid Financing Instrument (RFI) to address the challenges raised due to the ongoing pandemic. The disbursement constitutes 100% of its quota and is the single biggest allocation of RFI from the fund yet for any country fighting the pandemic. The fund is expected to cover the country’s balance of payment (BoP) needs, which have stemmed from fiscal pressures on the back of the actions taken to fight the pandemic. SA has a population of ~56mn, out of which there have been ~452,500 coronavirus cases. The cases have skyrocketed from ~6,000 in early May in just one quarter. President Ramaphosa’s government had imposed one of the world’s strictest lockdowns in March, which contributed to the worst downturn experienced by the country in recent history. Mr. Geoffrey Okamoto, First Deputy Managing Director and Acting Chair of IMF said in a statement that “South Africa’s economy has been severely hit by the COVID-19 crisis, reporting the highest number of cases in sub-Saharan Africa. A deep economic recession is unfolding as the decline in domestic activity and disruptions in the global supply chain resulting from the COVID-19 shock have added to a pre-existing situation of structural constraints, subdued growth, and deteriorating social outcomes.” and added that “The emergency financing under the RFI will help fill the urgent BoP needs that emerged as a result of the pandemic and thus contain the economic disruption and its regional spillovers. The RFI will also help catalyze other disbursements. The authorities’ commitment to transparently monitor and report all use of emergency funds is crucial to ensuring COVID-19-related spending reaches the targeted objectives.”

60% of the Global Bond Markets Now Yields Less than 1%

As central banks around the world slash interest rates to stimulate their economies, the bond markets have witnessed tumbling yields across the board. According to data from ICE compiled by the FT, 86% of of the $60tn worth of global bonds now yield 2% or lower, while 60% yield 1% or lower. Just 3% of the investible bond universe yield 5% or higher. The Federal Reserve’s support, which includes direct and indirect purchases of corporate investment grade and high yield bonds, has pushed bond yields lower. This has pushed investors in pursuit of yield to pile into risky assets. Matt King, global head of credit products strategy of Citigroup, said “Yield-chasing behaviour has become much more pronounced. If you are a pension fund or an insurance company, you are forced to go down in quality and take extreme risk.” High yield bond issuance in the US totaled $238bn so far, up 48% vs. the same period last year, according to JP Morgan Chase.

To get a better understanding of the fall in bond yields, we have compared yields on 10Y government bonds of key economies at the beginning of February vs. yields today, in the table below sorted by change in yields in ascending order. As can be expected, Treasuries led the charts as a haven asset with its 10Y yields tumbling 97bp over the almost six month period. This was followed by Mexico, Hong Kong, Singapore and Canada, all investment grade rated economies. 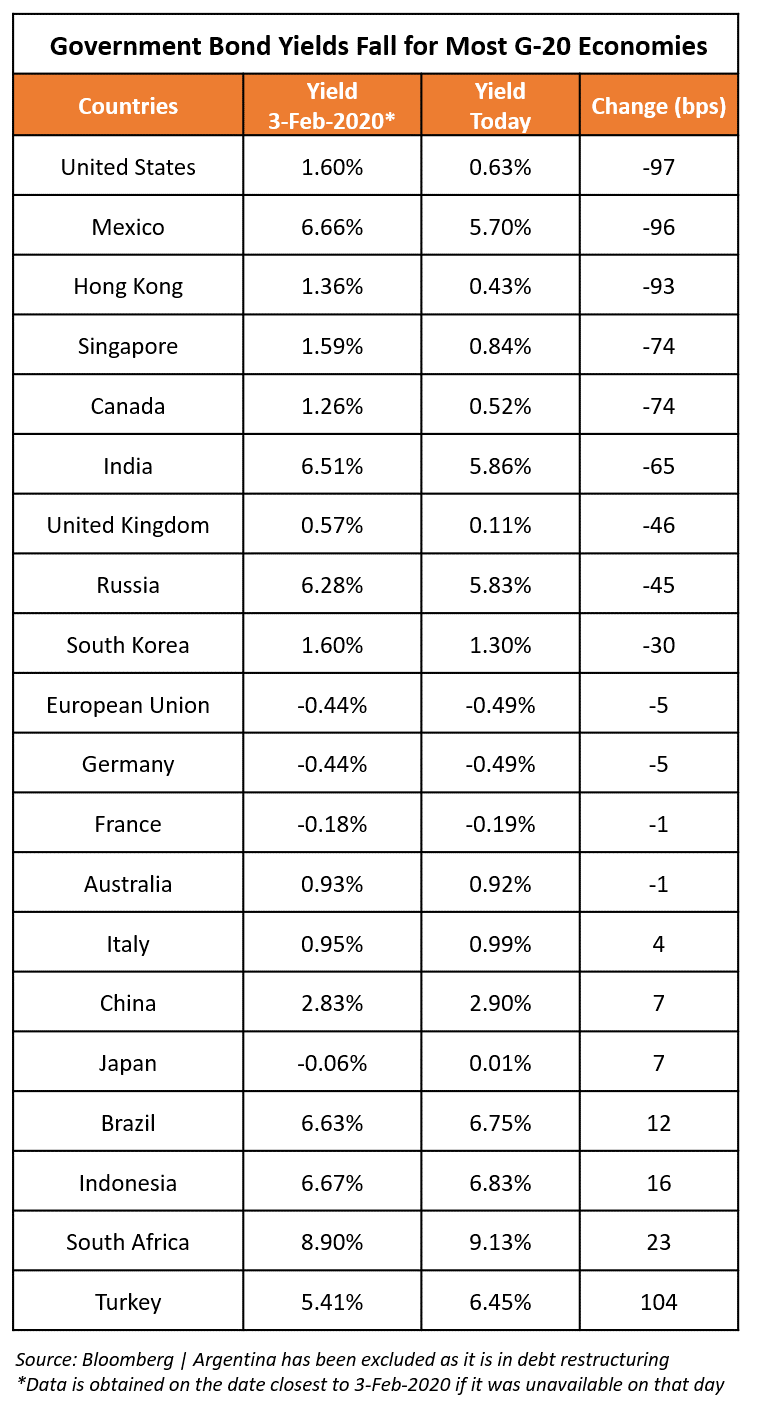 Not all economies saw their government bond yields fall with Brazil, Indonesia, South Africa and Turkey witnessing a double-digit increase in yields, indicating an increase in perceived risk for holding its debt. While Indonesia has an investment grade rating, Brazil, South Africa and Turkey are all rated junk. To relate the change in government bond yields to their credit ratings, one can refer to the deep dive on rating actions on sovereigns that we published late last week.

American cosmetics giant Revlon Inc is seeking bondholders’ approval for a maturity extension and haircut on its $450mn 5.75% bonds due 2021 as the company struggles to survive amid the pandemic. It is proposing to exchange the existing notes with new notes with the same coupon but maturing in 2024. It is also proposing bondholders to take a haircut of 20-25 cents on the dollar. Bondholders who exchange their notes by August 7 are eligible to receive $75 per $100 in principal plus a premium of $5. The offer is less favorable to holders that exchange their bonds after August 7 but by August 21, the final deadline. The proposal is contingent on consent from Revlon’s term loan lenders and participation of at least 95% of the bondholders. Revlon earlier reported a 39% drop in net sales for the quarter ended June 30, attributable to the pandemic. The company cut costs in response by furloughing office and factory workers, suspending salary increases and retirement matches. The latest proposal comes after Revlon managed to get lenders’ support to refinance $1.8bn of debt. 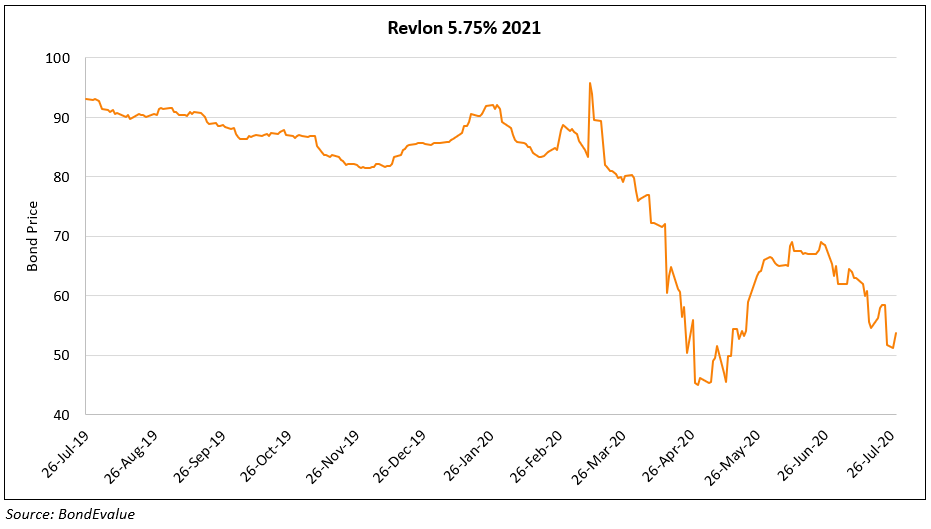 Real yields refer to the yields or returns on a financial instrument after accounting for inflation. It is calculated by deducting the annual inflation rate from the nominal yields. In an inflationary environment, the purchasing power of every dollar invested reduces by the annual inflation rate. This is why investors consider real yields to be an important metric since it indicates a more “real” indication of return compared to nominal yields.

We had published an op-ed on real vs. nominal rates amid the current environment of negative nominal rates in many parts of the world. You can read it here

Trillions in government and central bank spending have shielded a majority of companies from the worst of the epidemic but this may not continue, said Robert Mead. “The next phase of policy will be much more targeted” globally, Mead said. For companies that are too highly leveraged or struggling to conduct business in a post-pandemic world, “we think a lot more of those will be allowed to fail.”

“You can almost count on one hand the number of defaults that are taking place around the world, and we think that the potential for high-yield defaults to potentially be double digit,” said Mead. “There’s an unrealistic assumption that the policy will save every company,” he said. “Policy will be much more selective, much more targeted going forward and that will have implications for every section of the economy globally.” Pimco likes well-managed investment grade companies which understand their leverage, Mead said. It also favors new distressed debt deals as their covenants are such that they tend to offer better protection.

On the Strong Performance of the US Junk Bond Market

“The fact that the Fed has supported that market and allowed for that market to function is a positive,” said Quincy Krosby. “You’re allowing companies to be able to enter the market and raise money, and that’s crucial.”

The drop in spreads “is certainly notable considering the extended rally in equities and the rising doubts about the ability of equities to stage further gains,” Tom Lee said. “We view HY as a virtual leading indicator, and its relative resilience bodes well for further equity gains.”

“The fact of the matter is ’there’s always assistance in every recession. There’s always sugar,” said Jim Paulsen. The Fed’s moves “hugely boosted investor confidence and probably CEO confidence and caused them to sell less stocks than they would have otherwise and caused CEOs to hold onto employees longer than they might have.” “One of the reasons the Fed is doing this isn’t so much to provide liquidity, it’s to provide confidence,” he said. “They’re practicing psychology is what they’re doing.”

“I do see renewed activity in the bond market,” Governor Das said in response to a question on why the RBI not follow the footsteps of central banks like Federal Reserve in directly buying bonds to ease the pressure. “We don’t see the kinds of complaints that we saw in March or April. In fact, the bond sales have been at a record. There’s an extent up to which credit risk could be assumed,” said Das. “Banks will have to evaluate risks. It is a commercial judgement.” 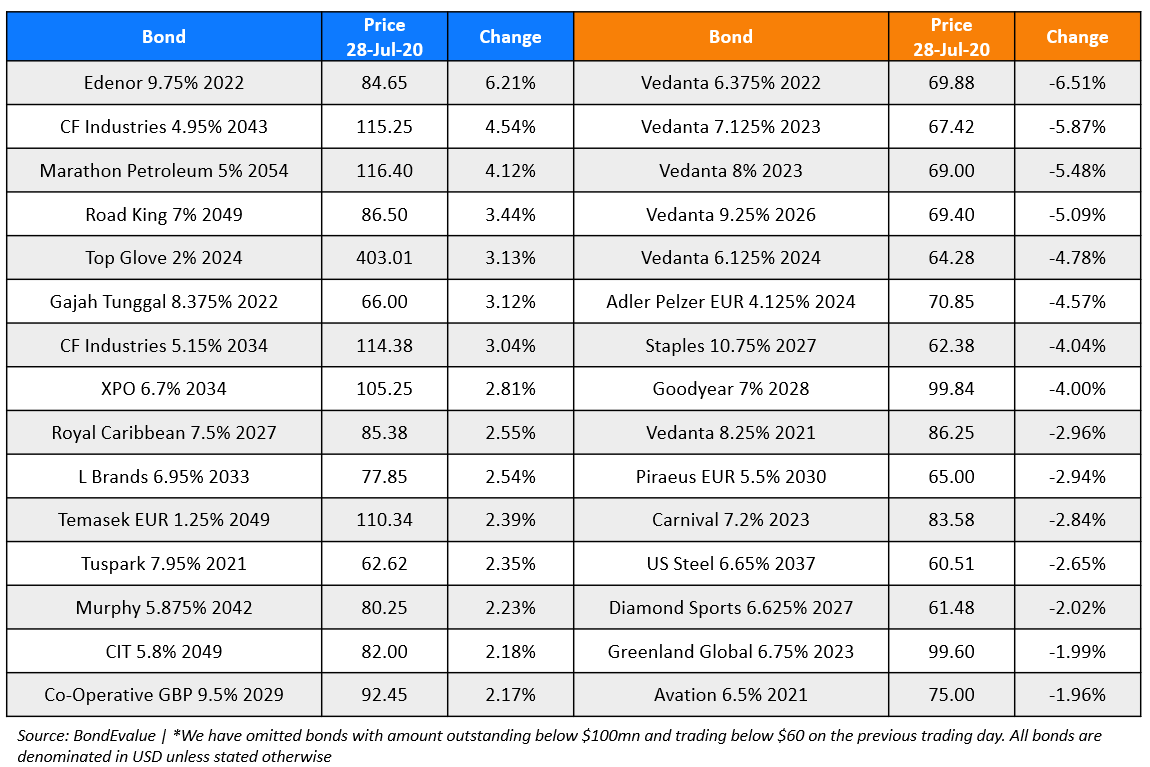