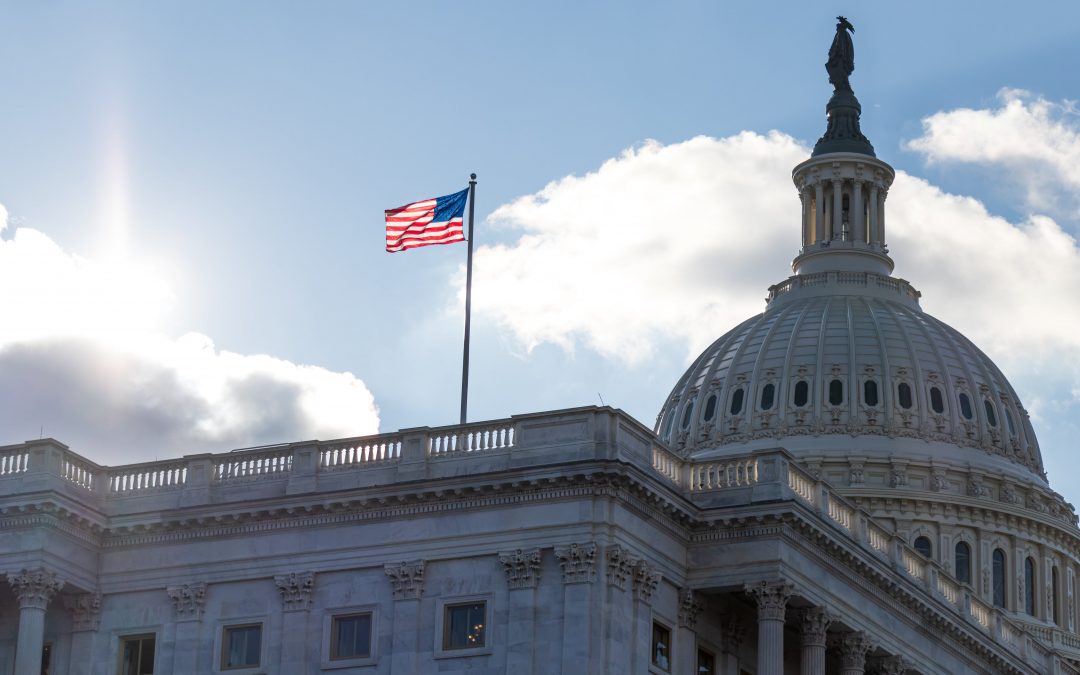 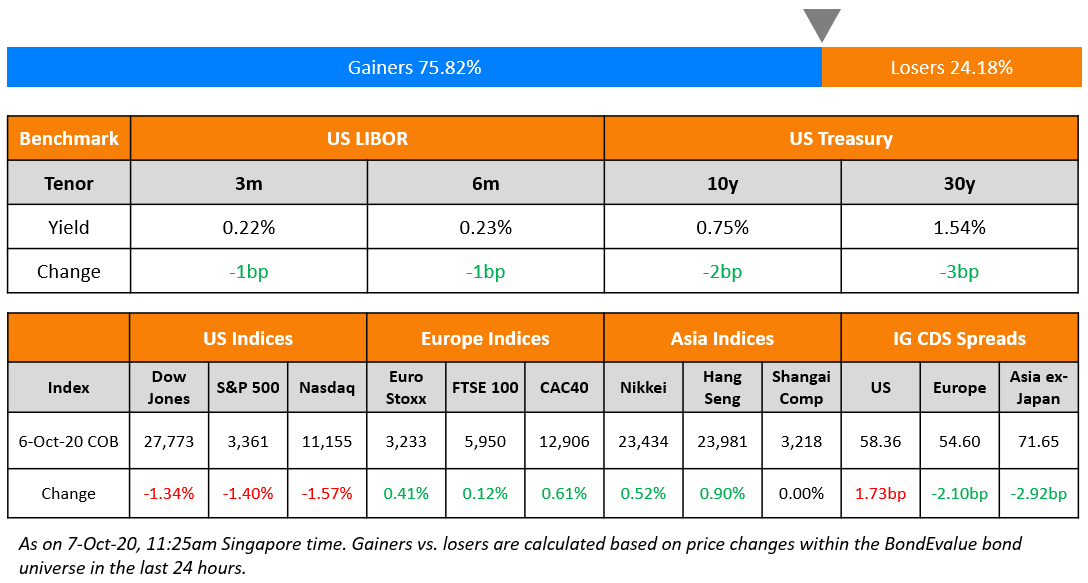 US equities dropped yesterday with S&P down 1.4% as tech (down 1.6%) and other sectors fell after Trump halted negotiations with Democrats on the Covid-relief stimulus until after the elections. Aviation fell sharply with Boeing and American Airlines down 7% and 4.5%. US 10Y Treasury yields also dropped 2bp with the risk-off sentiment as the Dollar Index (DXY) picked-up again. On the economic calendar, yesterday and today are light on data. Following S&P’s move, Asian equities are also lower ~0.5%. US IG CDS spreads widened slightly by 1.7bp while Europe and Asia Ex-Japan CDS spreads tightened by 2bp and 3bp respectively. 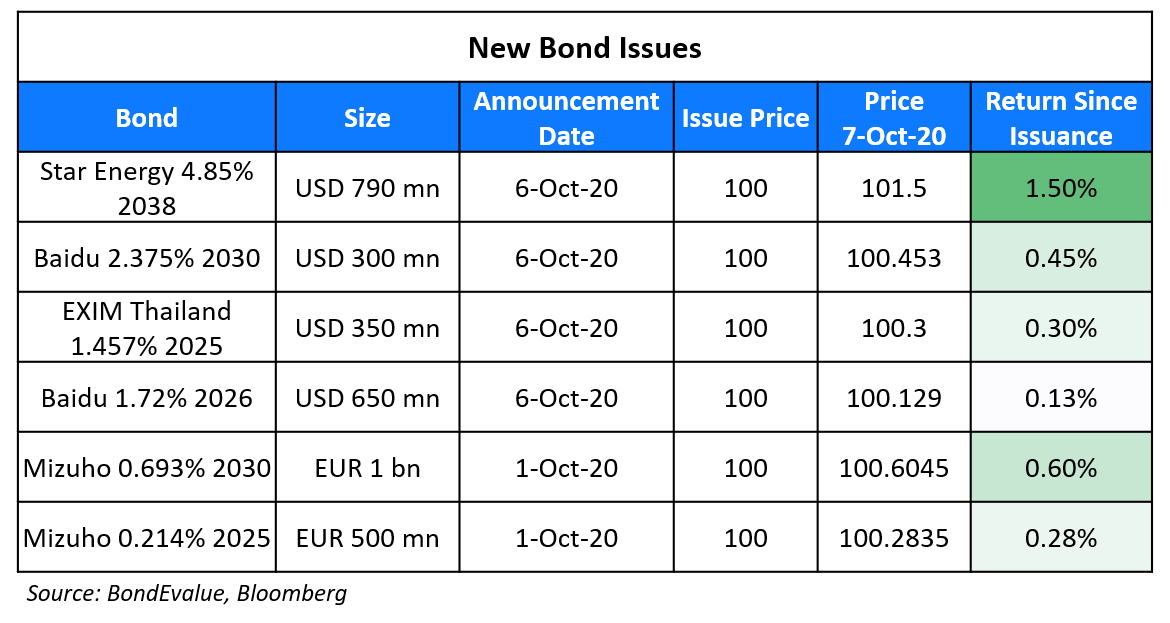 The Democrat-led House of Representative released a report yesterday recommending big tech companies to completely restructure their business due to their antitrust and monopolistic practices. The 449 page report essentially highlights the high fees, unfair contract terms, acquisition of companies to dampen competition, data extraction practices etc. For this, it suggested for example, a rewriting of US antitrust laws to ensure companies restructure and do not use their dominance in an area to hurt other companies. Recommendations include ways/rules to restore competition, strengthening antitrust laws and reviving the antitrust enforcement. The report’s recommendations can impact big tech companies especially if Democrats win the elections and control both the House and Senate. Bonds of big tech companies were stable yesterday. Today’s move in the stocks and bonds of these companies will be interesting to note as the report was released after market hours yesterday.

Macy’s (Ba2), the US department store operator signed a deal to invest an undisclosed stake in Swedish payments company Klarna. The deal values Klarna at $10.6bn, Europe’s highest valued private fintech. The deal would allow Macy’s customers to pay for online purchases in four interest free payments. FT reports that this deal is an attempt to boost purchases from younger shoppers due to the nature of the Buy Now Pay Later (BNPL) transaction and thereby also compete with the likes of Amazon, PayPal etc., with the US being one of the largest markets for BNPL services as per Reuters. “We’re excited to embark on a long-term relationship with Klarna that will help us reach wider audiences looking for seamless alternative payment solutions,” Macy’s Chief Digital Officer Matt Baer said. Macy’s 7% bonds due 2028 and 5.125% bonds due 2042 inched up by 4.4% and 2.6% to 71 and 59 cents on the dollar respectively.

Singapore state-owned Temasek Holdings announced on Tuesday that it had established Seviora Holdings, headquartered in Singapore, by combining four of its existing Asset Management Firms to provide multi-asset and multi-strategy investment expertise. The company aims to combine the assets of Azalea Investment Management, Fullerton Fund Management Company, InnoVen Capital and Seatown Holdings International into a new entity that will have assets worth S$75bn (~$55.1bn) under its management. Mr. Goh Yew Lin, who is likely to be appointed as the chairman of Seviora said, “The asset management industry is in a period of rapid change, driven by shifting investor preferences, evolving asset classes and large, concentrated pools of capital” and added, “By bringing four successful but distinctly different asset management companies together, we see the opportunity to accelerate business growth through creation of scale, synergistic product offerings and greater investment in technology.” Temasek’s bonds traded stable on the secondary markets.

Food and agri-business giant Olam International revealed through a press release yesterday that it has widened its multi-tranche credit facility by $300mn to $1,975 million. Olam had announced that it had successfully refinanced a $1,675mn debt facility on September 10 earlier this year. Proceeds from the facility, which has Olam’s wholly-owned subsidiary Olam Treasury Pte Ltd (OTPL) as a co-borrower, are planned to be used for refinancing of existing loans. Four new banks have joined Olam’s multi-tranche revolving credit facility in addition to the original 21 lenders. Olam’s bonds were largely stable on the secondary market. Its dollar 4.5% and 4.375% bonds due 2021 and 2023 both trade at ~101.

Hong Kong-listed Asia Orient Holdings ramped up its purchases of Evergrande’s dollar bonds, offering its vote of confidence to the creditworthiness of the world’s most-indebted real estate developer. An exchange filing revealed that Asia Orient and its subsidiaries Asia Standard International Group and Asia Standard Hotel Group bought $36.97mn worth of Evergrande’s bonds. This takes their total investment to $144.52mn since September 25, when rumors about a liquidity crisis at Evergrande sent its dollar bonds plummeting. Asia Orient’s exchange filings show that it sold $12.9mn worth of Kaisa’s 8.5% bonds due 2022 on September 16 and purchased Evergrande bonds between September 25 and October 5. Asia Orient’s bold bet seems to have paid off as it’s dollar bonds have recovered 10-12% since late September. 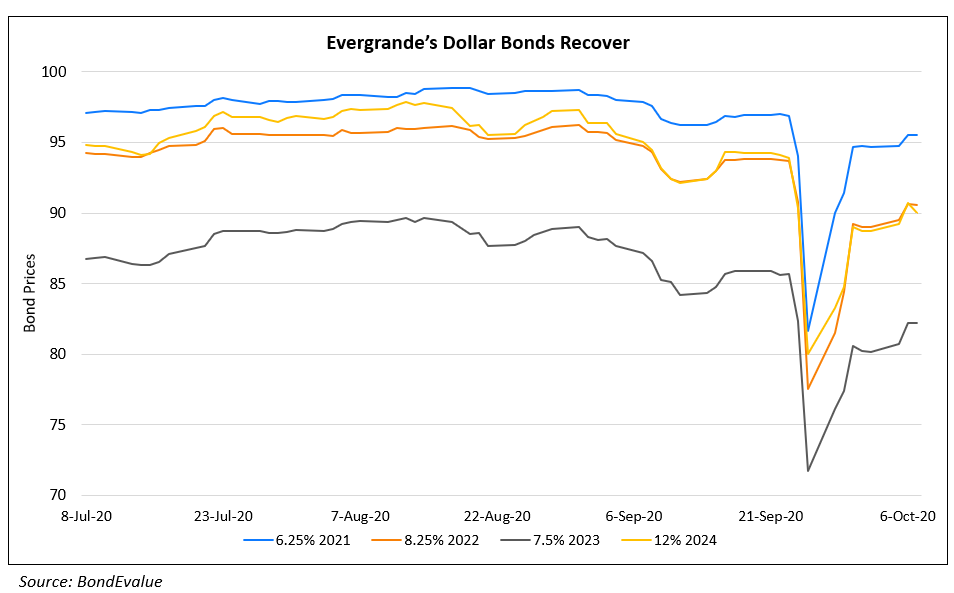 Philippines’ conglomerate San Miguel Corp. will begin work on a Philippines airport, servicing capital city Manila within the next six years according to the company’s President Ramon Ang. Ang also said that he is planning to return to the airline business by then – the company had entered the airlines sector in 2012 buying a 49% minority stake in Philippine Airlines and exited the business in 2014. According to Bloomberg, Mr Ang noted that most of its businesses including oil and food will remain weak due to the pandemic. Meanwhile, the Senate decided to give a go-ahead for San Miguel Aerocity to “construct, develop, establish, operate, and maintain a domestic and international airport and its adjacent airport city in Bulakan, Bulacan”. In the last week of September, the company mentioned its plan to raise ~20bn Pesos (~$412mn) via preference shares in an offer supplement. San Miguel’s dollar 5.5% perpetuals held steady trading around par. 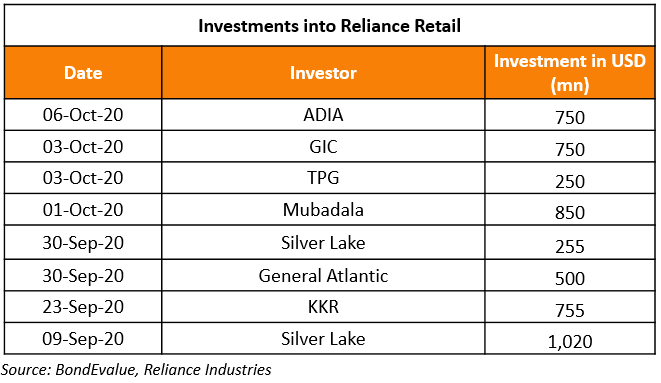 The large investments come amid Reliance’s acquisition of Future Retail in end-August for INR247bn (~$3.3bn). The Competition Commission of India (CCI) is still working on the approval of the deal, in line with fair practices. Future Retail’s 5.6% 2025s are currently trading at 88 cents on the dollar, having recovered from a lows of ~30 cents on the dollar in April amid default fears. 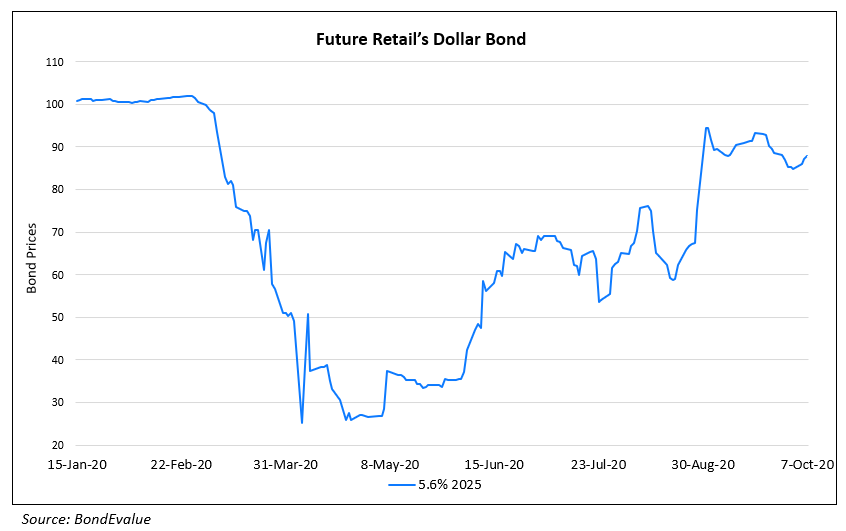 Dollar linked bonds are debt instruments that are denominated in local currency but settled in US dollars. The idea is to encourage investments into the ‘high-yielding’ local currency but not be exposed to that currency’s local fluctuations. Argentina issued a 0.1% coupon $1.8bn worth of dollar linked bonds maturing in November 2021 yesterday. The hope is to help keep their local currency Peso up by encouraging Peso savings while giving bondholders some protection against the vagaries of Peso fluctuations. These bonds are also issued to attract some foreign investment while financing local currency loans and projects.

On the danger of weak US recovery without sufficient government aid – Jerome Powell, Federal Reserve Chair

“Too little support would lead to a weak recovery, creating unnecessary hardship for households and businesses,” Powell said. “By contrast, the risks of overdoing it seem, for now, to be smaller. Even if policy actions ultimately prove to be greater than needed, they will not go to waste.”

“The recovery will be stronger and move faster if monetary policy and fiscal policy continue to work side by side to provide support to the economy until it is clearly out of the woods,” Powell said.

“Consumption held up well through August after the expiration of expanded unemployment insurance benefits, indicating that savings from transfer payments continue to support economic activity,” Powell said. “Still, since it appears that many will undergo extended periods of unemployment, there is likely to be a need for further support.”

“Declining inflation has been a persistent factor for some time,” Powell said. “We are still seeing downward pressure on inflation, and I think it’s appropriate for central banks, and certainly the Fed, to take that into account and move to a framework that is robust to that.”

“Certainly, you know, the recovery will continue without it, I think, but it’s going to be a much slower recovery and it’s disappointing that we didn’t get a package done,” Mester said.

“We expect asset quality to deteriorate significantly as economic conditions remain weak, while profitability will take a hit from rising credit costs and declining margins,” says Tarzimanov. “In line with weak operating conditions, we expect capital ratios will decline at 78% of the 218 rated APAC banks by the end of 2022 from the end of 2019,” adds Tarzimanov. “However, the decline at most rated banks will not be significant enough to prompt a change in our views on fundamental creditworthiness, which also take into account other factors such as profitability, asset quality, funding and liquidity.”

“Relying on the traditional safe havens is like skydiving with a ripped parachute,” said Gomez-Bravo. “Since the summer we’ve looked for alternatives to US Treasuries.”

“If you are a multi-asset manager, the traditional approach that you’ve taken to investing is certainly being challenged,” said DePass. “It is requiring you to think differently.”

According to Michele, the new “flavour du jour” is placing bets on the likes of the Mexican peso, Turkish lira and Indonesian rupiah to depreciate as a hedge against sell-offs in equities, high-yield credit and other risky assets. “It is a correlation that is recent and looks very strong,” he said.

“While by no means a substitute for US Treasuries, Chinese bonds do contain similar hedging properties albeit with an elevated risk profile,” Dhawan wrote in a note co-authored by Ran Duan, a quantitative research analyst.

“Use it as a buying opportunity and focus on more important underlying macro-economic fundamentals, such as interest rates and monetary policy,” Leger said.

“The government has to show a change of direction quickly,” said Furiase, adding Argentina had “very little gasoline in terms of reserves.” “The government is trying to buy some time but these are all patches that are unfortunately arriving late.”

“We have been very clear in this crisis that it is important to provide support to firms and more importantly, to workers,” Georgieva said. “So we are not coming with the idea of, ‘oh, well, let’s see how we can further tighten up spending in these times’.”

Robin Brooks, chief economist at the Institute of International Finance

“Falling currencies in emerging markets raise the fear of further devaluation and add risk premia to all kinds of credit spreads,” said Brooks. “They are a sign of tightening financial conditions and potential funding issues.”

“Asia is very different from the rest of [the emerging markets],” said Chua. “Many countries are self-financing so they don’t have the same constraints as other emerging markets.”

“The increase in the risk of debt crisis over the short and medium term is going to be very high,” he said. “If you lose market access, you are in trouble.” 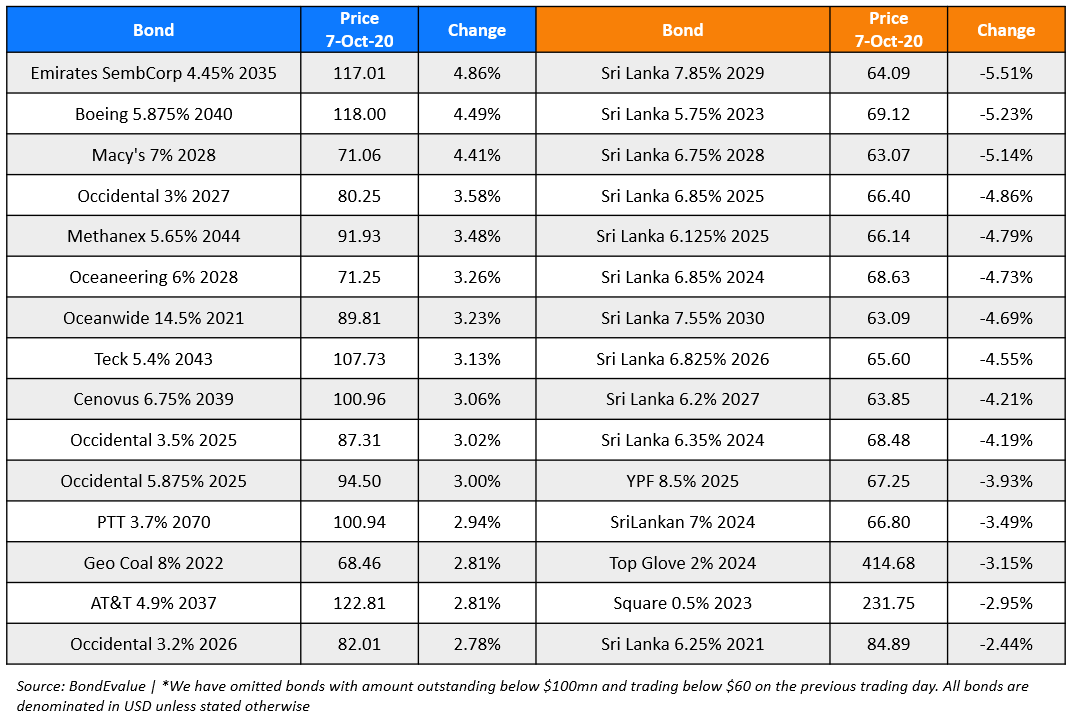