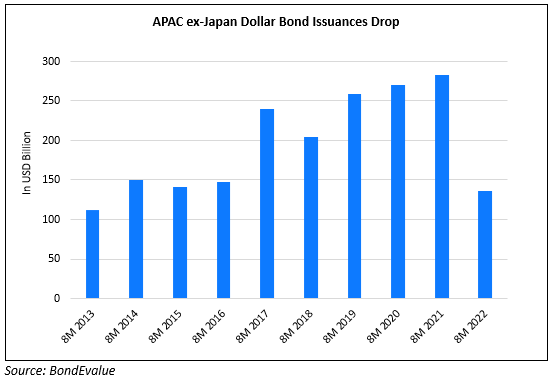 Issuance volumes from the APAC ex-Japan region during the first eight months of 2022 are at its lowest since 2013. Issuance volumes stood at $136.4bn during the period. With respect to quarterly volumes, while the third quarter is not yet over, the region is on track for its lowest Q3 volumes since 2011. Deal volumes currently stand at $16.24bn for Q3. Chinese property developers typically contribute to a large chunk of deals from the region. However, due to the sector’s crisis, private developers have barely tapped primary markets. Besides, the continuous rise in interest rates thanks to high inflation and hawkish central banks have seen volatility pick-up in financial markets, further depressing issuance volumes in primary markets from APAC ex-Japan.