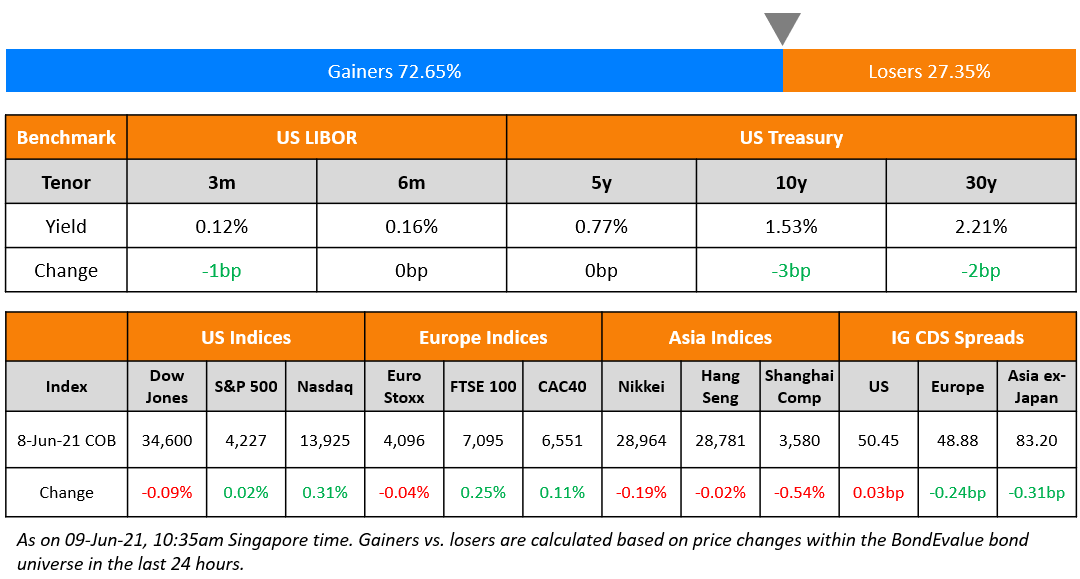 US markets gained marginally to remain within point blank range of the all-time highs. S&P remained largely unchanged and Nasdaq gained 0.3%. Consumer Discretionary and Energy sectors led the gains, up 1% and 0.9% respectively. The US Commerce Department data revealed that the US trade deficit narrowed for the first time in April 2021. US 10Y Treasury yields dipped by 3bp to 1.53%, their lowest in the month. The global economy is expected to expand 5.6% in 2021, the strongest in 80 years, according to the World Bank. European markets had a mixed day with DAX lower by 0.2% while FTSE and CAC were higher by 0.3% and 0.1% respectively. US IG spreads were largely flat and HY CDS tightened 0.3bp. EU main and crossover CDS also tightened marginally by 0.2bp and 1.2bp respectively. China’s producer inflation data for May came in higher than expected at 9% vs. expectations of 8.5% while CPI rose 1.3% vs. expectations of 1.6%. Asian markets have a mixed opening. Nikkei was down 0.3% while Shanghai and HSI were up 0.4% and 0.1%. Asia ex-Japan CDS spreads tightened 0.3bp. 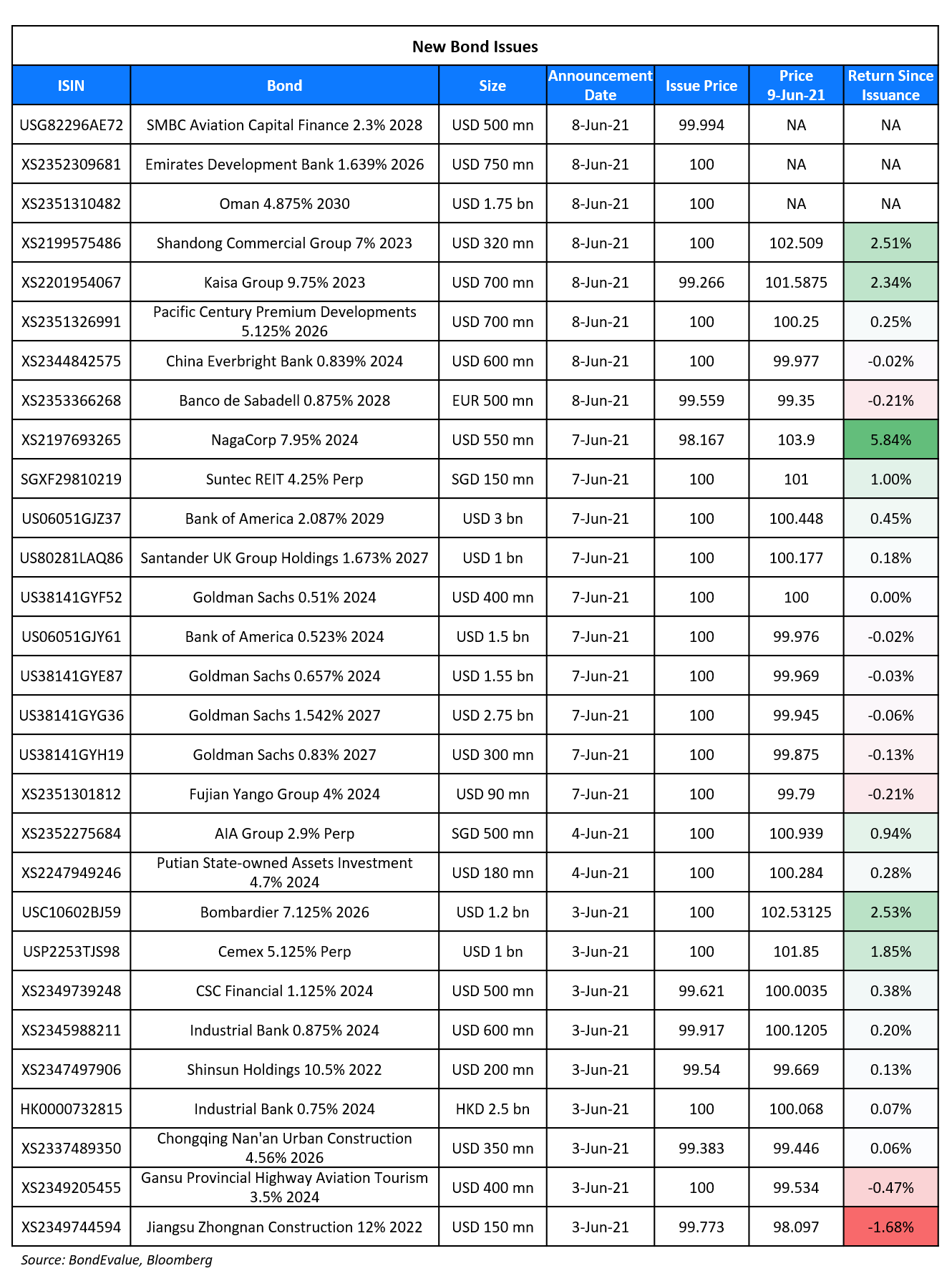 Kaisa Group raised $280mn via a tap of their 9.75% 2023s bond at a yield of 8.9%, 30bp inside initial guidance of 9.2% area. The bonds have expected ratings of B2/B and received orders over $1.4bn, 5x issue size. The tapped bonds were priced roughly in-line with their initial 2023s that currently yield 8.96% in secondary markets. Proceeds will be used to refinance debt maturing within a year.

Pacific Century Premium Developments (PCPD) raised $700mn via a 5Y non-call 3Y (5NC3) bond at a yield of 5.125%, 22.5bp inside initial guidance of 5.35% area. The bonds are unrated and received orders over $1.4bn, 2x issue size. Wholly owned subsidiary PCPD Capital is the issuer and Pacific Century Premium Developments is the guarantor. The bonds also have a non-binding letter of support provided by telecom company PCCW.  There is a change of control put at 101 if PCCW, Richard Li and/or any affiliate collectively cease to hold at least 40% of the voting rights of the guarantor. Proceeds will be used to fund a tender offer ending June 16 for its $700mn 4.75% 2022s. It is offering to pay $1,018 per $1,000 in principal.

SMBC Aviation raised $500mn via a 7Y bond at a yield of 2.301% or T+110bp, 35bp inside initial guidance of T+145bp area. The bonds have an expected rating of A-/A-. Subsidiary SMBC Aviation Capital Finance DAC is the issuer and the bonds come with a guarantee from the parent. Sumitomo Mitsui Financial Group holds 66% beneficial ownership of SMBC Aviation. Proceeds of the issuance will be used for general corporate purposes, which could include aircraft purchases and repaying debt.

Baseline Credit Assessment (BCA) is a component in a broader methodology used by rating agency Moody’s to assess banks. This is used to analyze a bank’s intrinsic or standalone strength, without external support. BCA has three components:

In its recent rating action, Moody’s downgraded HSBC’s BCA to a3 from a2 on account of challenges they will face in restoring profitability on a sustainable basis as compared to peers.

On the view that Fed policy shift is needed – Brian Sack, director of global economics at D.E. Shaw & Co., and former head of monetary and financial market analysis at the Fed Board of Governors
“Inflation expectations have already risen to a level consistent with the Fed’s mandate, so my view is that the Fed should not allow them to rise further.” “It may be time to adjust the policy message to reflect that.” “Doing QE in a quarter when the economy is growing so rapidly isn’t going to help contain inflation expectations,” Sack said.
On ECB aligning with the Fed in double act to keep stimulus flowing
Gilles Moec, chief economist at AXA Investment Managers
“Recent signals from the Fed probably help the ECB.” “I don’t expect fireworks on Thursday, I don’t think they want to rock the boat.” “The risk of unsettling the market will be lower, with lower contagion effects for the euro.” “It puts the ECB in a safer environment.”
Loretta Mester, Federal Reserve Bank of Cleveland president
“We want to be very deliberately patient here because, you know, this was a huge, huge shock to the economy.”
Holger Schmieding, chief economist at Berenberg
“I don’t believe that inflation and wage pressures will substantially increase.” “In the U.S., the risk is greater, but even there I don’t see wage inflation taking on a life of its own.”
Mansoor Mohi-uddin, chief economist at the Bank of Singapore Ltd
“There’s a clear divergence opening up.” “The Fed will only be slow to taper its asset purchases while the ECB and the BOJ also are keen to keep monetary conditions loose during the pandemic.”

“Green bonds are the only asset in our list that serve as a safe haven against large market fluctuations during the Covid period — not even gold.” “These green investments, especially investing in green bonds, are not luxury investments where only loyal, dedicated investors put their money regardless of their investment benefits, because they believe in those investments. It’s not like that,” Demirer said. “There’s also financial benefits to socially and environmentally responsible investments.”
“It’s really good news for not only investors who believe in these principles, but also for corporations and governments — any issuer — who want to issue securities that are geared toward environmentally and socially responsible investments.” “Investors kept their money in those investments, and even invested more money, even during the pandemic period when all investors were scared to keep money in equities,” he said. “But it looks like those investors who believed in those social and environmental investment principles will be rewarded.”
On Italy’s bond sale showing that ECB taper fears are overblown – Jens Peter Sorensen, chief analyst at Danske Bank
“The [Italian] government has a solid cash balance, the economy is reopening, they get plenty of support from the ECB and EU.” “What’s not to like?” 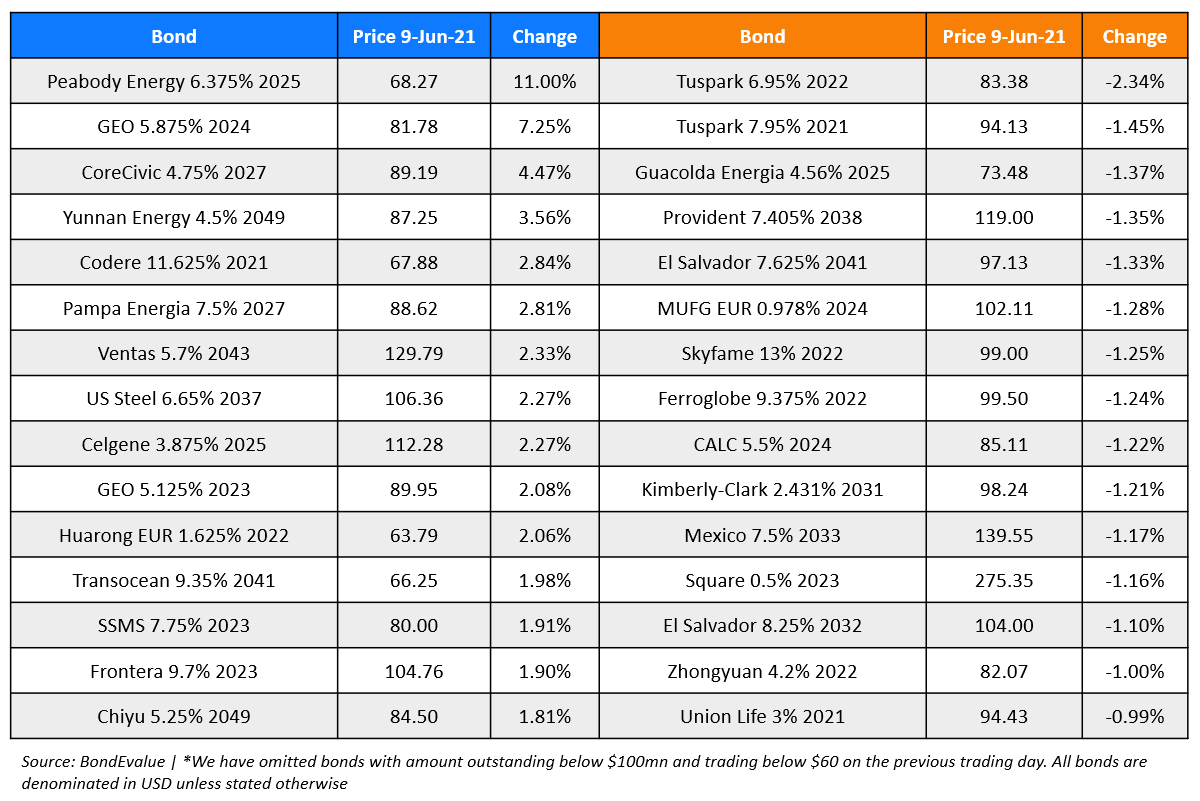