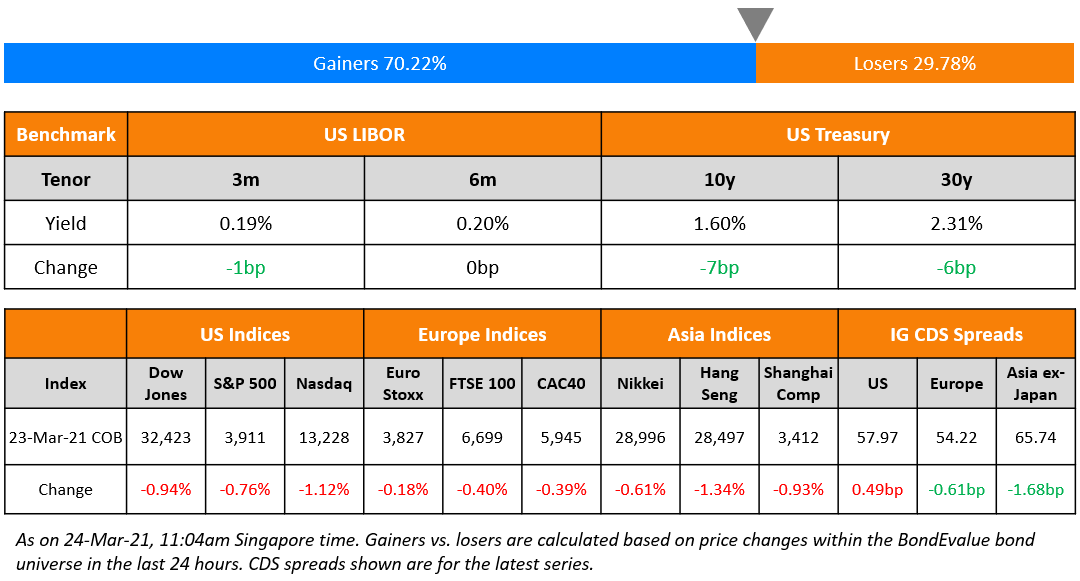 S&P ended 0.8% lower and Nasdaq was 1.1% lower, reversing Monday’s gains. The US 10Y Treasury yield dipped 7bp to 1.60%. US Treasury Secy. Janet Yellen said that there were no current plans to lengthen the maturity of debt issuance. European equities also struggled with the DAX flat while FTSE and CAC were down 0.4% each. US IG CDS spreads were 0.5bp wider and HY was 6.8bp wider. EU main CDS spreads were 0.6bp tighter and crossover spreads tightened 0.3b. Asian equity markets have opened lower by 0.6% and Asia ex-Japan CDS spreads are tighter 1.7bp.

Keen to learn bond market fundamentals from industry professionals? Sign up for our Bond Traders’ Masterclass that consists of five modules starting with A Practical Introduction to Bonds today at 6pm SG/HK. Avail a 25% discount on a bundle of five sessions! 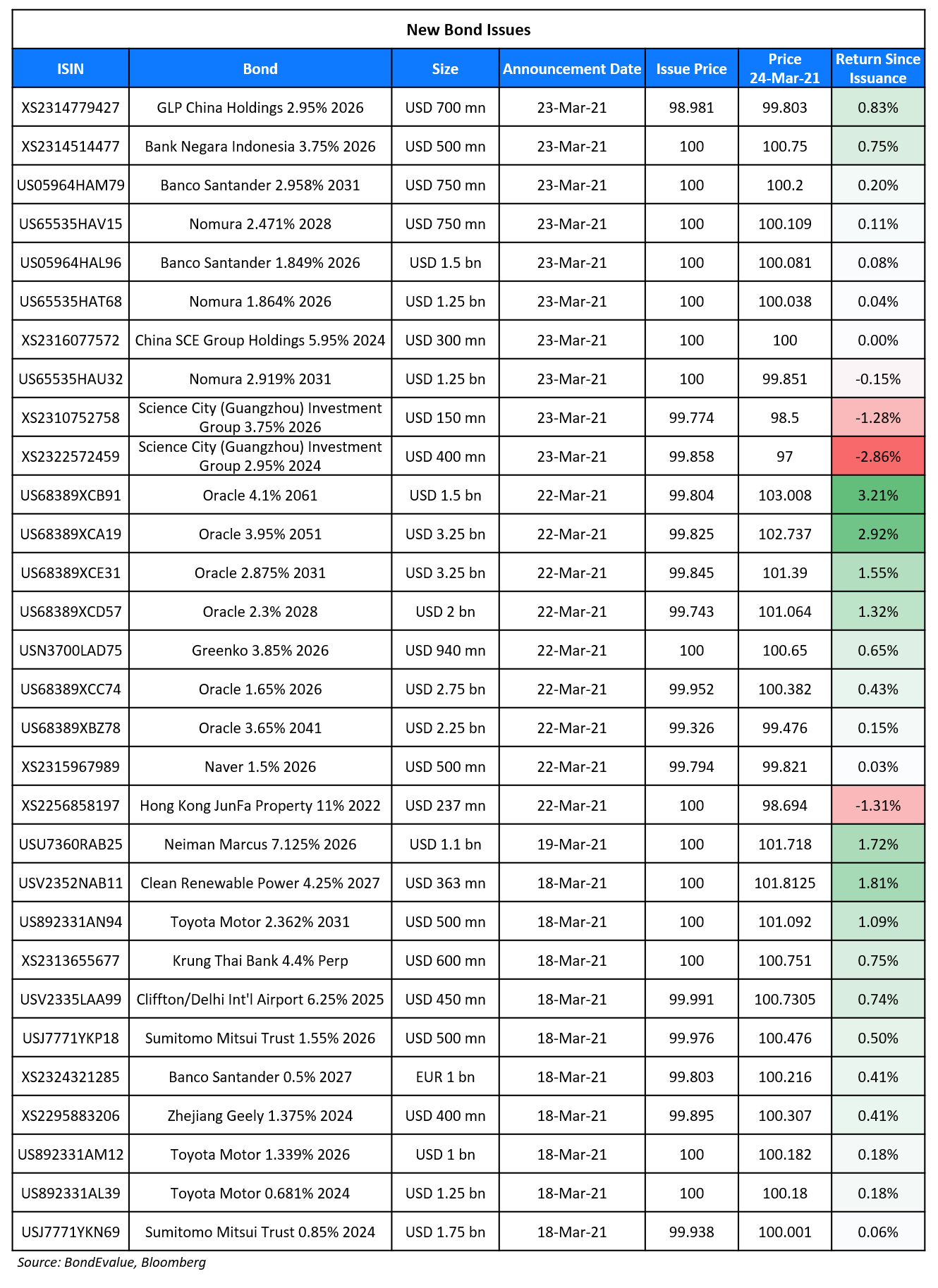 GLP China Holdings raised $700mn via a 5Y bond at a yield of 3.172%, or T+235bp, 40bp inside initial guidance of T+275bp area. The bonds have expected ratings of BBB- and received orders over $5bn – Asia took 92% and Europe 8%; Asset/fund managers booked 76%, sovereign wealth funds and public institutions 16%, banks and financial institutions 7%, and private banks 1%. Proceeds will be used to refinance debt and for general corporate purposes.

Bank Negara Indonesia raised $500 via a 5Y tier 2 bond at a yield of 3.75%, 45bp inside initial guidance of 4.2% area. The bonds have expected ratings of Ba2/BB with Asia taking 73%, EMEA 25%, US offshore 2%. Fund/Asset Managers got 87%, Banks/Insurance/Sovereign funds 7%, private banks & others 6%. The bonds will be written down permanently if Indonesia’s Financial Services Authority determines the bank to be non-viable. There is a dividend stopper. Proceeds will be used for funding and general corporate purposes. The Indonesian government has a majority stake in the bank.

Nomura raised $3.25bn via a three-trancher. It raised:

The bonds have expected ratings of Baa1/BBB+ with proceeds going towards loans to the bank’s subsidiaries, including Nomura Securities, which will use the funds for general corporate purposes.

This refers to an option for the bondholder that when exercised, requires the issuer to redeem the outstanding bonds on the date of the company’s IPO. Telegram’s latest 7% 2026s has an IPO redemption option subject to a few conditions laid out in the prospectus. These include completion of the IPO, bondholders complying with the company’s procedures and regulations. Once redeemed, bondholders can convert their bonds into shares at a ratio specified by Telegram. The bond prospectus is available for download on the BondEvalue App.

“It is therefore imperative to put in place sound public policy incentives to encourage market forces to fill in the gap,” Yi said. “Green transition may cause the value of carbon-intensive assets to fall and sour the balance sheet of firms and financial institutions,” he said. “This will heighten credit risk, market risk and liquidity risk, and further undermine the stability of the entire financial system.” “The financial system can play a key role in supporting green transition and managing climate-related risks,” the governor said.

On government and corporate bonds in their worst start to a year this century – Sergey Dergachev, senior portfolio manager for emerging-market debt at Union Investment

“In order to calm down markets and improve sentiment, we need to find a plateau where rates could stay for several days,” said Dergachev.

“We are going to see some really high inflation numbers in the next two or three quarters,” said Freund. “Why would you buy a 10-year bond and lock in a negative real yield for the entire 10-year period?” Freund said.

Mark Egan, portfolio manager of the Carillon Reams Core Bond Fund
“You have to go back a long time to where people can remember a rising interest rate environment for more than a few months,” he said. “The price of safety is relatively low and the price of yield or return is very high.”

“Is inflation going to rise in the next couple months? Absolutely,” said Peters. “But the gravitational pull is for inflation to go lower not higher.”

“It seems like the rise in breakeven inflation rates … has pretty much allowed the market to fully price in what they see coming in the way of inflation,” said Whiteley. “And now they’re saying we’re seeing stronger real growth alongside inflation.”

On US investors still interested in investing in the Chinese market

“U.S. investors continue to be very interested in investing in (the) Chinese market,” Wang said. “Especially from the bond market perspective, there is a structural increase in the interest.”

Jason Pang, Asia fixed income portfolio manager at J.P. Morgan Asset Management
“There’s not any clear reason why we shouldn’t be disengaged from this particular market,” he said. The probability of “a much bigger sell-off in China rates is much lower than the rest of the world.” 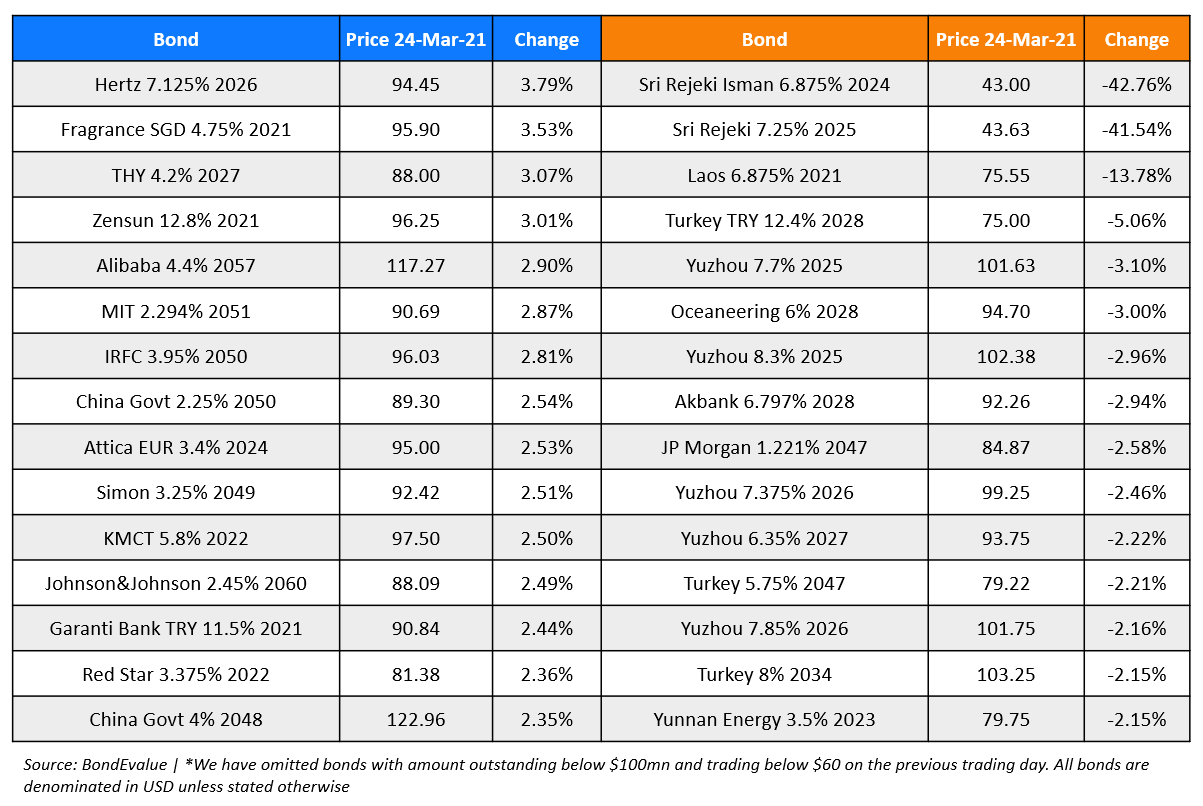