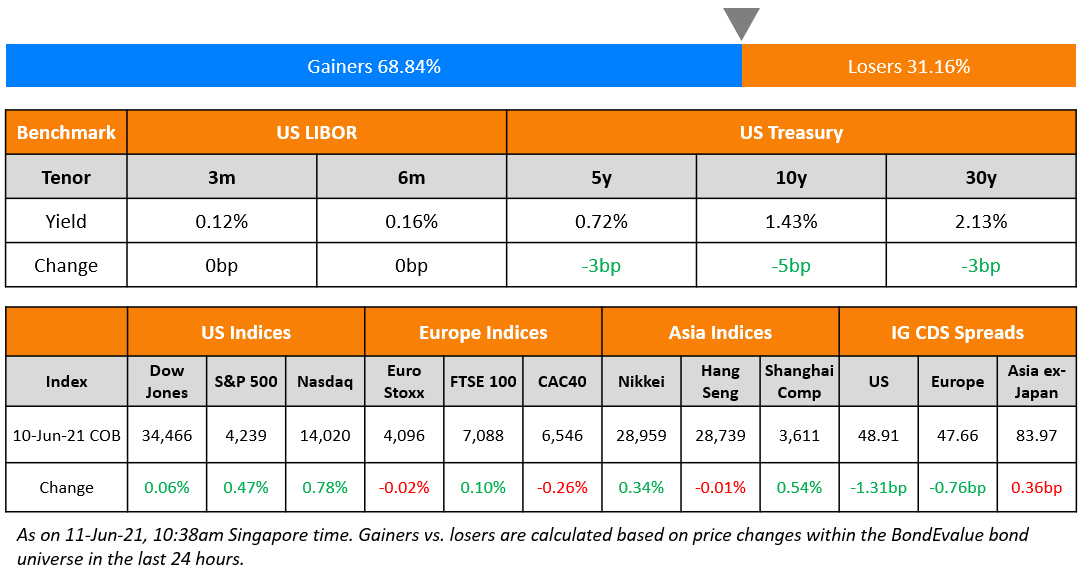 S&P hit another record high despite the higher consumer price index (CPI) numbers for May. The S&P was up 0.5% and tech heavy Nasdaq was up 0.8%. Healthcare, Real Estate and IT found favor with investors, up 1.7%, 1% and 0.8% respectively, compared to financials which were down 1.1%. The much awaited US CPI for May came in at 5% YoY vs. expectations of 4.7% and 0.8% higher than the April reading, making it the highest reading since 2008.  A Fed report on Thursday also revealed that US household wealth rose to a record $136.9tn at the end of March, which augurs well for growth. US jobless claims for the prior week fell to 376k in line with expectations. Despite the positive data, US 10Y Treasury yields were down 5bp at 1.43%. In Europe, DAX and FTSE were largely stable and CAC was down 0.3%. US IG and HY CDS tightened 1.3bp and 4.7bp respectively. EU main and crossover CDS also tightened by 0.8bp and 4.6bp respectively. Gulf markets ended marginally higher with Saudi TASI and UAE’s ADX up 0.1%. Latam markets also closed higher with Brazil’s Bovespa up 0.1%. Asian markets have had a mixed start with Shanghai down ~0.3% while HSI is up ~0.4% and Asia ex-Japan CDS spreads widened 0.4bp. 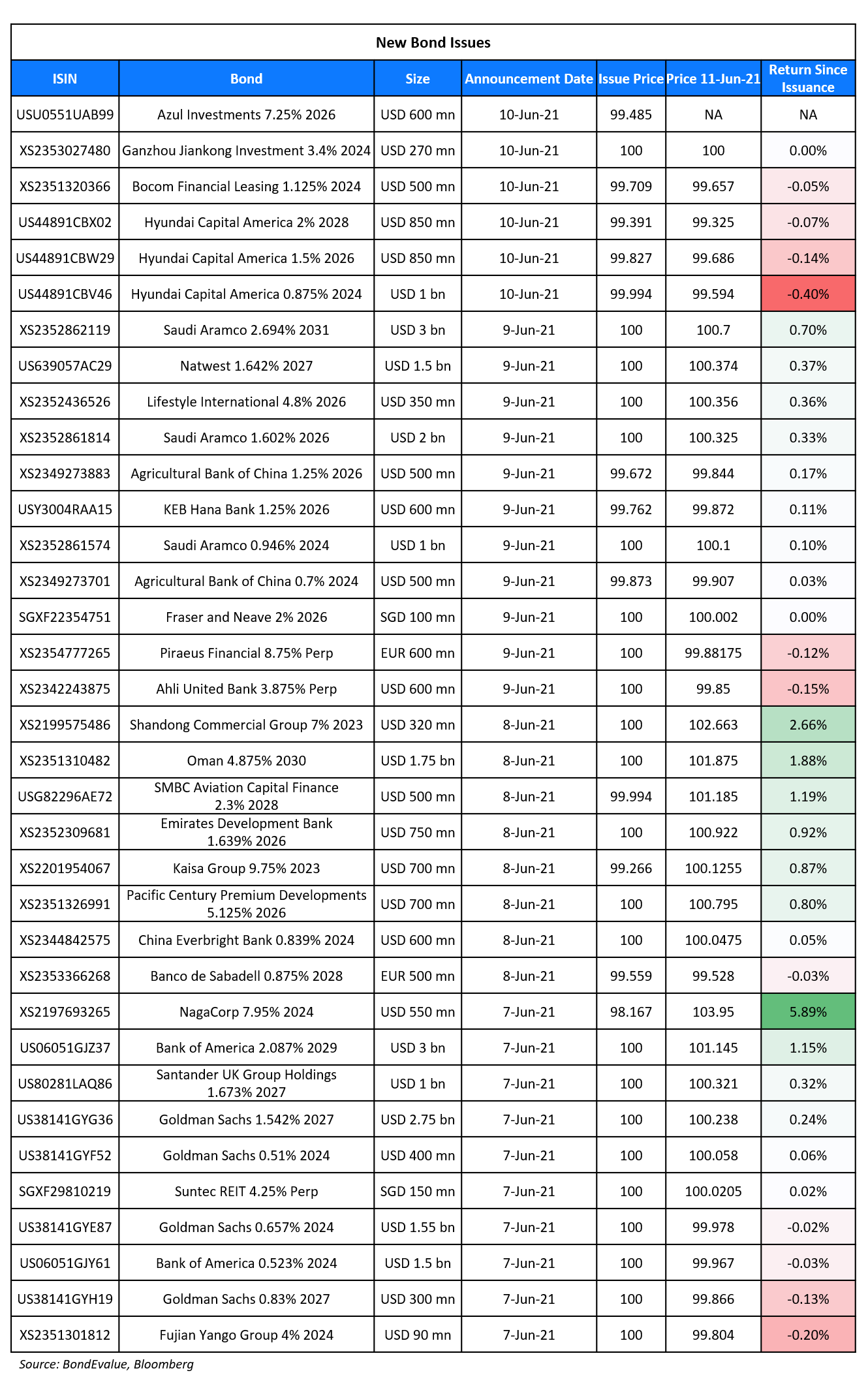 Hyundai Capital America raised $2.7bn via a three-trancher. It raised:

The bonds have expected ratings of Baa1/BBB+. Proceeds will be used for general corporate purposes. Hyundai Motor Co is providing a support agreement for the new notes.

Ganzhou Jiankong Investment raised $270mn via 3Y credit-enhanced bonds at a yield of 3.4%, 40bp inside the initial guidance of 3.8% area. The bonds are unrated. Wholly owned subsidiary Ganzhou Hengzhi is the issuer and the parent company is the guarantor. The bonds are also supported by an irrevocable standby letter of credit provided by Jiangxi Bank Ganzhou branch. Proceeds will be used for project construction and general working capital. Ganzhou Jiankong Investment is 55%-owned by the Ganzhou SASAC and 45%-owned by the Ganzhou Development Zone Finance Bureau.

BoCom Financial Leasing raised $500mn via 3Y sustainability bonds at a yield of 1.224%, or T+92bp, 43bp inside the initial guidance of T+135bp area. The bonds have an expected rating of A3/A- and received orders over $2.25bn, 4.5x the issue size. Asia took 98% while EMEA and US took 2%. Banks received 64%, fund/asset managers 34%, and central banks/insurers 2%. Wholly owned subsidiary BoCom Leasing Management Hong Kong is the issuer and the bonds come with a keepwell and asset purchase deed from the parent. Proceeds will be used for general corporate purposes and to comply with the company’s sustainable financing framework.

Coined by Edward Yardeni, ‘Bond Vigilantes’ are bond market players who sell bonds in large quantities pushing up interest rates if they believe that the government isn’t protecting the currency. For example, if inflation rises, deficits grow, or a country’s creditworthiness is at risk, the bond vigilantes sell government bonds, which would lead to rising yields and therefore a higher borrowing cost for the government.

On gains in Consumer Price Index (CPI) stoking inflation concerns
In a note by Sarah House and Shannon Seery, Wells Fargo & Co. economists
“We see signs of inflationary pressures broadening out, which we believe will keep monthly price gains from merely falling back to their pre-pandemic trend.”
Andrew Husby and Yelena Shulyatyeva, Bloomberg economists
“The May CPI report shows reopening-sensitive categories dominating price pressures for a second straight month.”
Anu Gaggar, senior global investment analyst at Commonwealth Financial Network
“The frothiness in CPI continues for now but between base effects and pent-up demand pressures, it is probably not giving a definite answer to the great inflation debate, and you need to read the bond market tea leaves.”
In a note by Morgan Stanley economists
“While transitory factors did a lot of the heavy lifting driving the May upside, the more persistent components like rents and OER firmed up as well much more than expected, pointing to a firmer source of foundation for the inflation data as the transitory factors begin to fall out of the figures.”
On investors confident in the Fed even as inflation spikes
Colin Asher, senior economist at Mizuho
“The Fed is getting some traction on its message that the inflation pressures are transitory.” “If you really want to panic about inflation you need to believe that the huge year-on-year increases we saw in commodity prices will be repeated again next year and that looks unlikely. (This CPI print) must be close to being the high point.”
Peter Rutter, head of equities at Royal London Asset Management
“Clearly, bond markets are buying the narrative that it’s transitory – we don’t think that’s a certainty but in some ways it feels like people are sure central banks will deal with it even if it proves not to be transitory.”
Joseph LaVorgna, Americas chief economist at Natixis in New York
“The market seems to be clearly signaling that the acceleration in the economy is not sustainable and there may even be some lingering worries about what happens on taxes, regulation and government spending,” he said.
Mark Grant, chief global strategist at R. Riley Financial
“The (inflation) numbers were slightly more than expected, but not way outside of the range,” he said. “The bond markets were not surprised, and I don’t think this going to change the Fed’s view of keeping rates very low.”
On inflation bets running out of steam as global bonds rally

“With bond market goggles on there is no inflation, it seems.”

Guy LeBas, chief fixed-income strategist at Janney Capital Management
“My sense more broadly is that we have passed the peak of the narrative of rising inflation and we now have more bets on transitory inflation over the coming months.”

“A lot of this is about positioning.” “As Treasuries start rallying people get out of their short positions, which drives the rally further.”

Peter Chatwell, head of multi-asset strategy at Mizuho
“We have one major central bank that’s going to be providing more liquidity than markets thought a month ago.” “That acts as an anchor for other markets, including Treasuries.”

Sonal Desai, chief investment officer for fixed income at Franklin Templeton
“I think [the inflationary spike] might stick around for a bit longer than anticipated,” Desai said. “I think there could be more going on than base effects. The question remains: how does the market think the Fed will react? Next week’s Fed meeting will be very interesting.”

On the rise in non-performing assets in China – Guo Shuqing, chairman of the China Banking and Insurance Regulatory Commission

“The default rate for some large and medium-sized enterprises has risen, and the credit risks at banking institutions has intensified.” “These measures have stabilised the market in (the) short-term but require all countries in the world to share responsibility for the negative effects,” he said.

“Central banks are happy to be behind the curve at this juncture.” “Manufacturing in Europe is doing better and services are expected to improve, but I think the ECB will want to see more evidence of recovery before they act.”

Krishna Guha, vice-president at Evercore ISI
“This is a win for the ECB doves.” “We think the council was leaning towards slowing PEPP in June early in the inter-meeting period, but got cold feet after the market moved to push nominal yields sharply higher with periphery spreads, the euro and rate hike expectations also moving too much for comfort.” 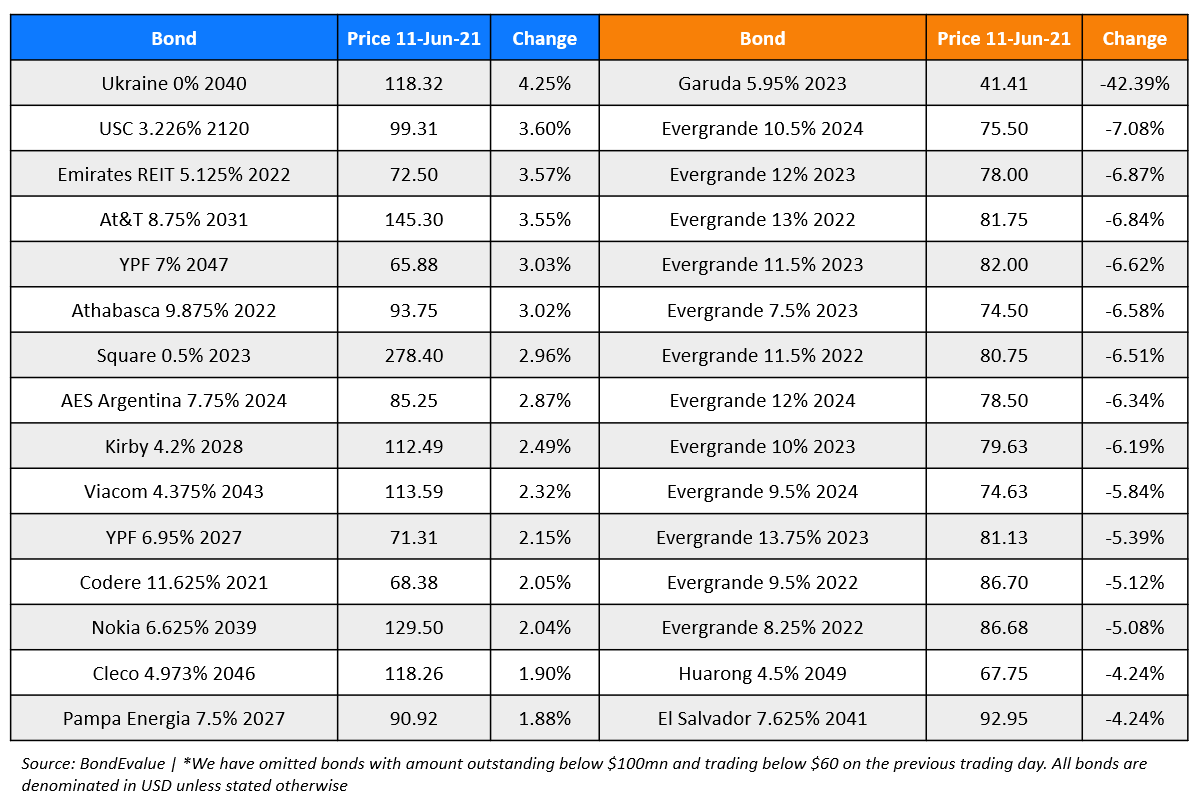