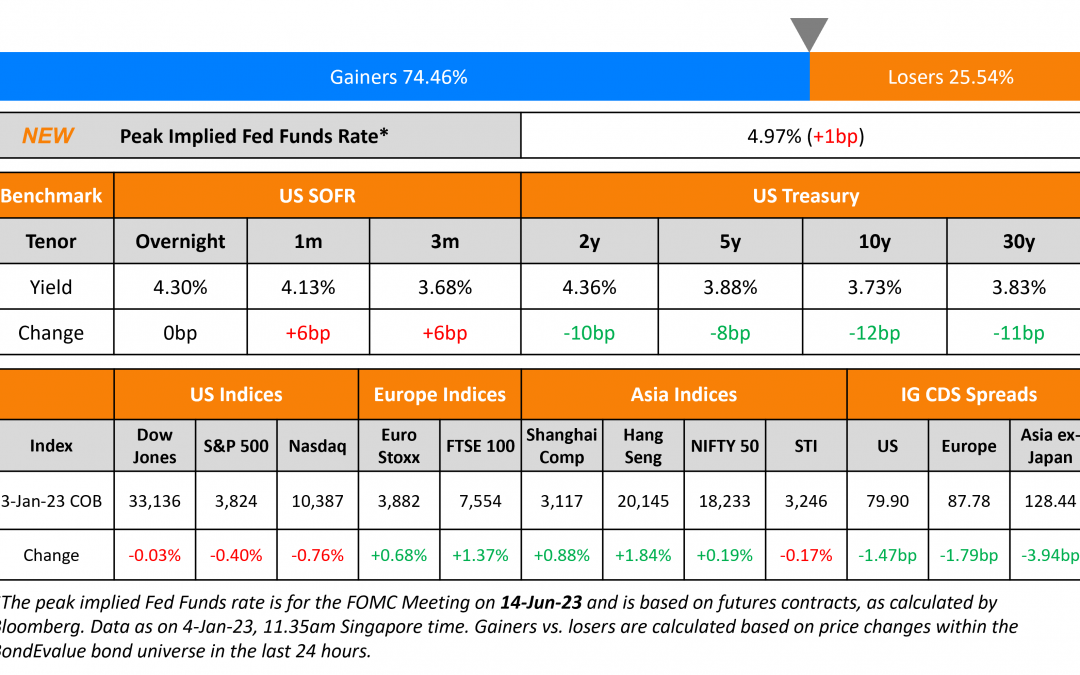 US Treasuries rallied on Tuesday with yields dropping by 8-12bp. This was the strongest start to a new year since 2001. The peak fed funds rate was up 1bp to 4.97% for the June 2023 meeting. The probability of a 25bp hike at the FOMC’s February 2023 meeting stands at 68%, unchanged from yesterday. US equity markets ended lower, with the S&P and Nasdaq down 0.4% and 0.7% respectively. US IG and HY CDS spreads were 1.5bp and 5.8bp tighter.

Bond markets kickstarted the year with a surge in issuance volumes. There were 60 new USD and EUR-denominated bond deals priced across regions totaling ~60.7bn. In terms of dollar deals, markets saw 41 new deals totaling $40.8bn, ~2% of 2022’s full year issuance volume in just a day. Of the 41 dollar deals, 19 were from investment grade issuers who collectively raised $34bn.

European equity markets ended slightly higher. The European main and crossover CDS spreads tightened by 1.8bp and 12.2bp respectively. German 10Y Bund yields fell over 7bp after Germany’s December inflation print came in at 9.6% vs. 11.3% in November. Turkey’s inflation also cooled to 64.3% in December from 84.4% in November with analysts noting that this was due to base effects (Term of the Day, explained below). Asian equity markets have opened mixed today. Asia ex-Japan CDS spreads tightened by 3.9bp. Singapore’s PMI fell 0.1 points to 49.7 in December, a fourth consecutive month of contraction in overall activity.

SocGen raised $5bn via a four-tranche deal. It raised:

Ford Motor Credit raised $2.75bn via a three-trancher. It raised:

The senior unsecured bonds are rated Ba2/BB+/BB+. Proceeds will be used for general corporate purposes.

The senior unsecured bonds have expected ratings of A1/A-. Proceeds will be used for general corporate purposes.

Base effect refers to the impact of comparing current levels of an index for a given period vs. levels during the same period a year/month ago. Let us take inflation as the metric. Analysts look at the inflation print for a given month and compare it with the same month in the previous year to find out the YoY change. If the rate of inflation was low/high in the previous year’s corresponding period, even a little increase/decrease in the price index will result in a larger/smaller rate of inflation in the current year.

On Treasuries Chalking Up Strongest New Year Surge Since Greenspan

Ian Lyngen, head of US rates at BMO Capital Markets

“The last two weeks of 2022 can be aptly characterized as a bearish phase in US rates. As investors return from the long weekend we’re anticipating ‘cooler heads’ will prevail.”

Gregory Faranello, head of US rates trading and strategy at AmeriVet Securities

“The corporate calendar is generally large in January, but for the first trading day of a year this is impressive and a sign of the times”

“The inflation forecast being raised was surprising because it sounded like most economists on the street were expecting very little change there, and I was expecting them to cut their forecast. It seems that there is more of a consensus view that they’ve got to go above 5% than certainly I would have thought the numbers implied.”

On no Dollars as foreign currency crunch hits Egypt’s economy

“The CBE could clear the market by continuing to raise rates, floating the currency and restricting the money supply, but the implications for prices and growth are problematic. The authorities’ preferred option is to wait for inflows from the Qataris, the Emiratis and the Saudis to buy assets in Egypt, but that is also uncertain” 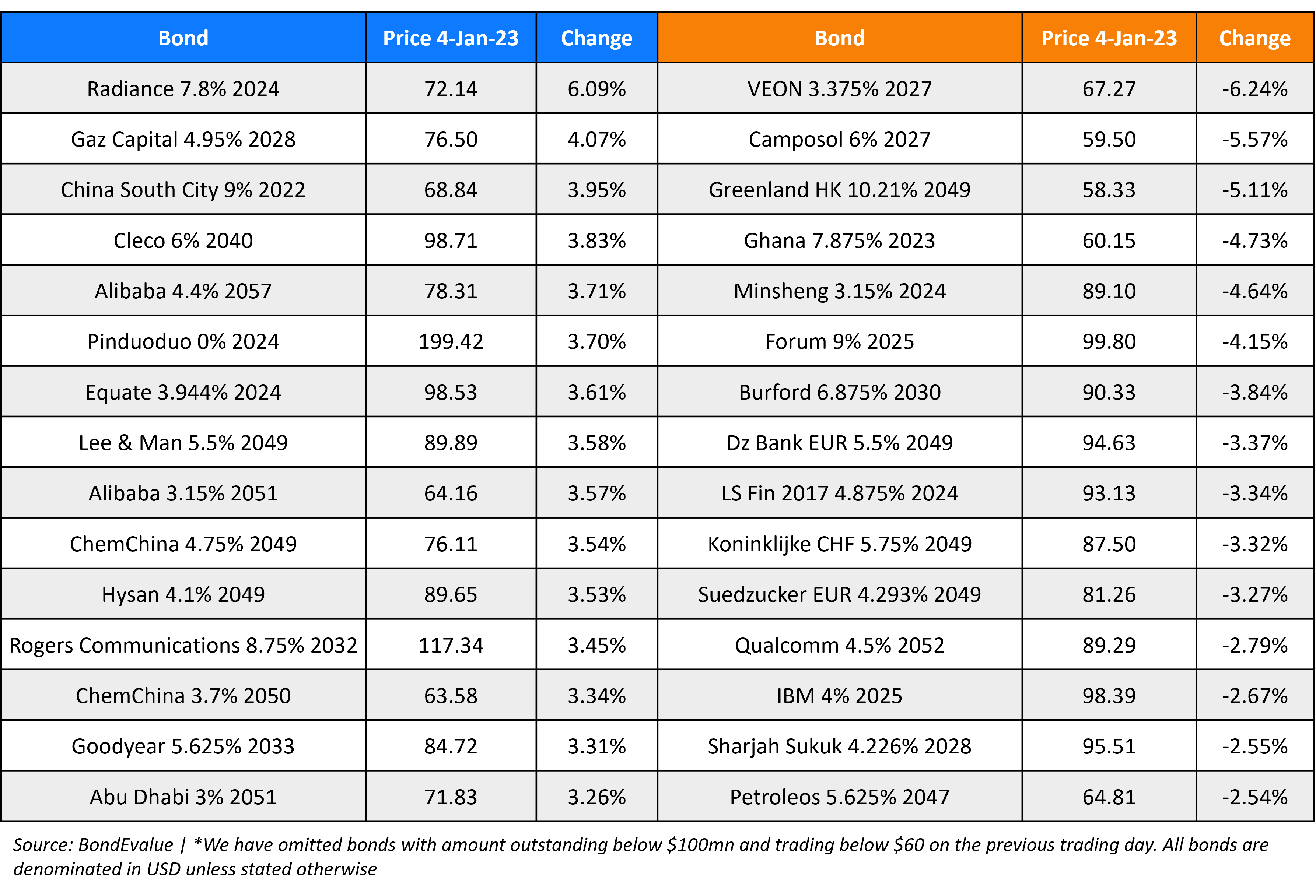