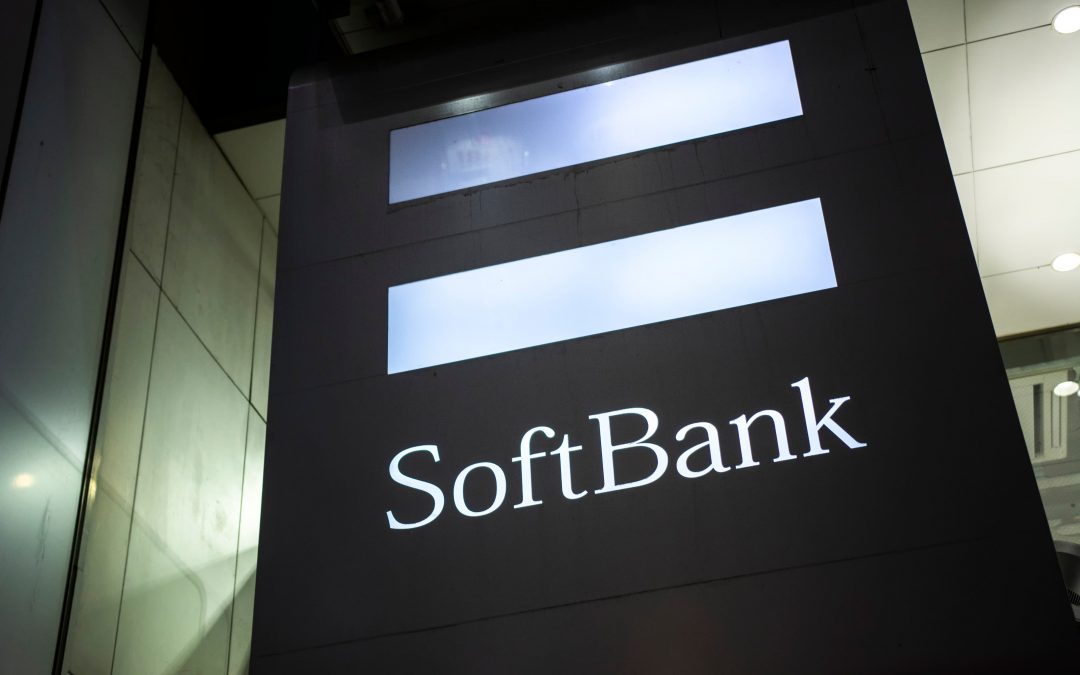 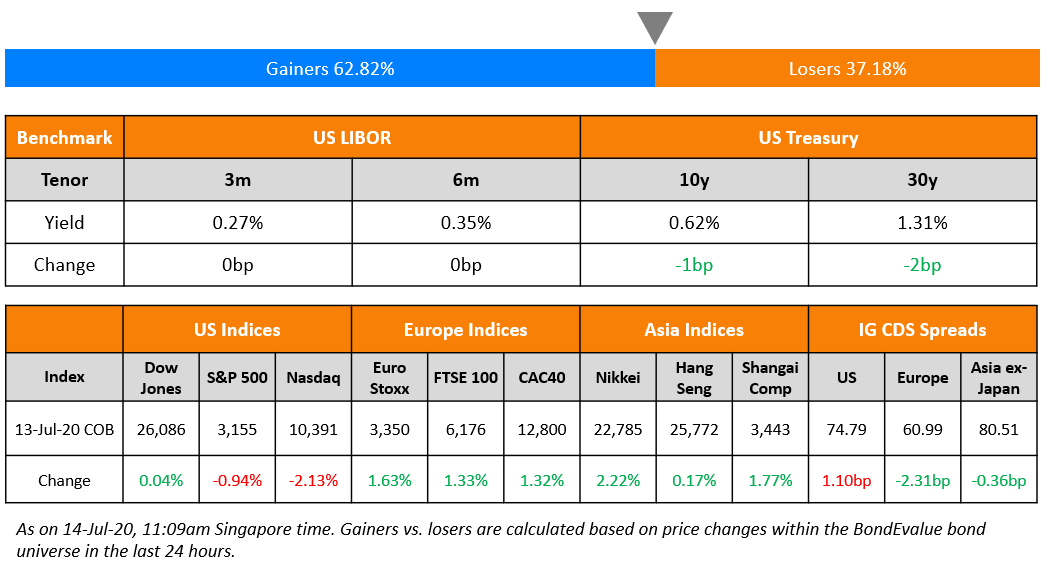 Asian markets are opening with a risk-off tone after a late sell-off in Wall Street triggered when California reversed its policy for reopening the economy. Increasing tensions between the US and China over the South China Sea also weighed on sentiment. Major indices had gained 1% earlier in the day but were down about the same by end of day. The news triggered profit taking in major tech stocks like Microsoft, Amazon and Tesla. European shares had closed earlier with healthy gains and are likely to open lower later today following the risk-off sentiment. Treasury yields were slightly lower. Singapore Q2 GDP number came out this morning, showing a massive contraction of 41.2% quarter on quarter (vs exp -37.4%). The Asian dollar bond market saw a busy day of issuance yesterday with MUFG, ICBC, BOCOM among others raising $7bn compared to a more subdued day in the US with only $6bn in new deals. 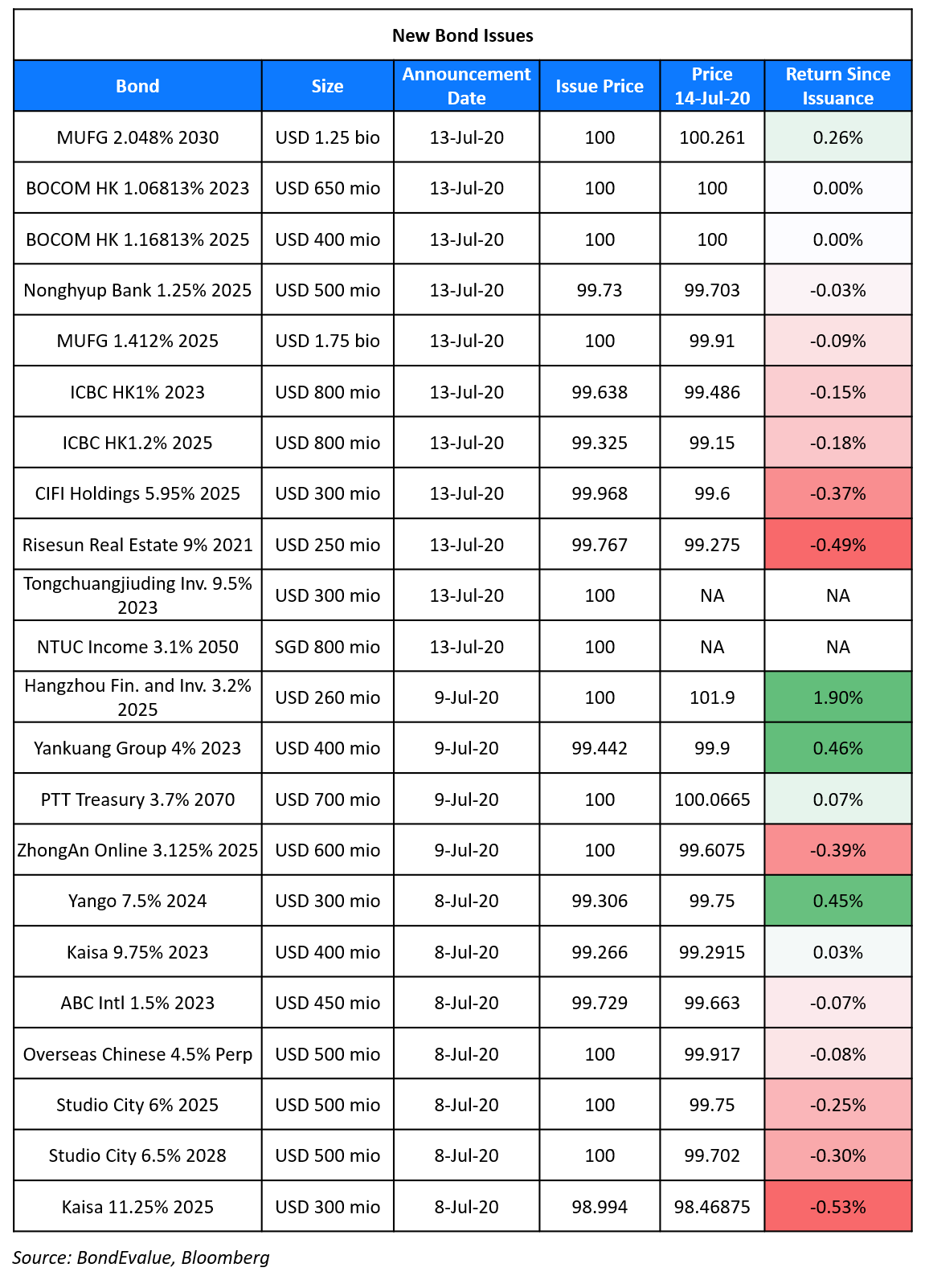 NongHyup Bank raised $500mn via 5Y Covid-19 social bond at a yield of 1.306%, 100bp over Treasuries and 40bp inside initial guidance of T+140bp area. The bonds, with expected ratings of A1/A+, received final orders of over $2.35bn, 4.7x issue size. Proceeds will be used to finance or refinance existing projects from social eligible categories in accordance with the bank’s green, social and sustainable bond framework, including plans to support SMEs affected by the coronavirus.

SB Energy’s proposed $600mn bond was cancelled after launching at an initial price guidance of 6.75% area on the back of tepid investor demand. As reported by us yesterday, the bond was to be issued by SB Energy Investments Limited, an SPV wholly-owned by SB Energy Holdings, which is a joint venture between Softbank (80%) and Bharti Overseas (20%). According to a source quoted by the Economic Times, “They were not getting demand at the pricing they were seeking. There has been critical commentary in the recent days and even on Monday from debt houses and global brokerages like Nomura and Jefferies that further compounded the matter and turned sentiments. A recurring concern from investors has been to what extent and for how long will the sponsors, especially Softbank, will bankroll the venture.” Nomura’s credit sales and trading desk wrote, “Overall, we consider the proposed structure, leverage profile and sponsor commitments for the proposed restricted group issuance under SBEI as one of the weaker ones in the Indian renewables space.”

Barclays, Bank of America, BNP Paribas, Deutsche Bank, Mizuho, MUFG, SMBC Nikko and Standard Chartered were joint global coordinators and bookrunners for the issuance, which was expected to be rated BB-/Ba3. “The problem with their portfolio is on one hand their PPAs (power purchase agreements) are very aggressively priced but their costs are at least 25-30% higher than most industry peers,” said a senior industry CEO who has seen the company’s operating and financial details. “Typically such issuance get 2x demand. In this case they could not even get 1 times book,” said another official aware of the developments.

LMIRT Management Ltd., manager of Lippo Malls Indonesia Retail Trust (LMIRT) announced over the weekend via an exchange filing that it has further extended the Long Stop Date (Term of the day, explained below) for its divestment of Pejaten Village and Binjai Supermall to July 17, 2020. The company had previously extended the long stop date to July 10, announced on June 26. In December last year, the company said that it had entered into a conditional agreement to divest Pejaten Village and Binjai Supermall for IDR 1.28tn ($88.8mn) to NWP Retail, a joint venture between private equity giant Warburg Pincus and PT City Retail Developments. The transaction was expected to close in the second quarter of 2020; however, it got delayed due to the ongoing pandemic. Late last month, LMIRT Management said that the parties to the transaction are “in the process of discussing certain required amendments” to the conditional sale and purchase agreements prior to completion, “including a potential downward adjustment” to the respective sale prices of the two malls, considering the unforeseeable situation in the past few months arising from the Covid-19 pandemic in Indonesia. LMIRT’s 7.25% bonds due 2024 traded lower by 2 points since last Friday to 89.8 cents on the dollar currently.

Argentina’s energy giant YPF SA has topped up its proposed $1bn bond swap offer with dollars (cash) to lure investors. The swap offer has been proposed on its 8.5% dollar bonds worth $1bn due in 2021. The fresh offer is to swap the bonds for new bonds maturing in 2025 at the same interest rate. YPF is incentivizing the investors by offering cash. As per the offer, investors who accept the terms before July 17 would be given new bonds worth $925 and a cash payout of $125 per $1000 in principal. Those who accept the offer after July 17 but on or before July 21 would be offered new bonds worth $950 and a lower cash payout of $50 for every $1000 of principal exchanged. YPF proposes to pay the principal for the new bonds in eight installments starting September 23, 2021 against the earlier proposal of $100 in cash and payment of $950mn in principal in four installments starting March 23, 2022. YPF needs the consent of 70% of the bondholders for the proposed swap for the 5Y bonds issued in 2016. The bond swap will allow the company to improve its financial health. While announcing its Q1 results, YPF had informed that it has $1.3bn in debt payments through the end of 2020 and $1.6bn in 2021. As per Moody’s, the company has around $700mn in trade finance and working capital debt maturing in 2020. In case the swap does not materialize, the company’s ability to make investments will be severely restricted especially as cash flows have declined due to a freeze on diesel and gasoline prices since August 2019. The lockdown has only added to the stress of the company. 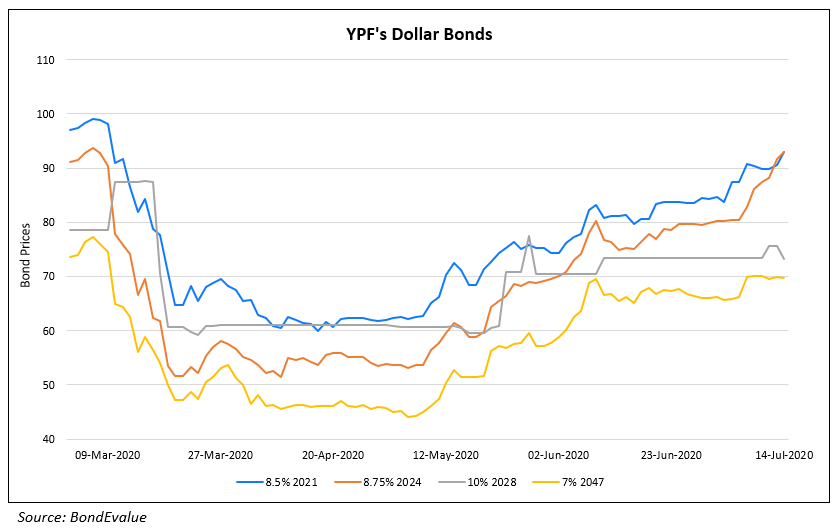 In related news, Argentina is in the process of renegotiating a $65bn debt. Bloomberg reported that The Province of Mendoza and Telecom Argentina along with YPF also offered cash for bond swap deals to lure them. According to Bloomberg, a Lucror Analytics analyst Lorena Reich said that “It seems counter-intuitive when the main goal is to preserve cash,” while adding that “it’s better to give some cash upfront and have investors accept the offer than the alternative of having to pay the full amount of the bond in 2021.”

Guo Kai, deputy director of the monetary policy department of the People’s Bank of China

“(Some recent) policies and measures were made in response to the coronavirus outbreak, and once they completed their mission they have exited,” said Guo Kai. “In the next half of the year, the economy will return to normal, and the role of traditional monetary policy may become more obvious,” Guo said. “We have entered a more normal state.”

“Right now, we put greater emphasis on the word ‘moderate’” Guo said, pointing to considerations about future changes to the credit supply and prices. “(We must) recognize that appropriately lowering interest rates doesn’t mean the lower, the better,” Guo said. “If rates are far too low … that may cause a problem of capital flowing to where it shouldn’t.”

“We expect the PBoC to maintain its policy easing stance through the remainder of this year as the economy is still far from a full recovery and faces heightened uncertainty,” Lu said. “However, the People’s Bank of China (PBoC) may postpone some previously planned monetary easing measures, especially those high-profile ones such as reserve requirement ratio (RRR) cuts and medium-term lending facility (MLF) rate cuts, given the recent stock market rally,” Lu said. “We believe the probability of the PBoC cutting its benchmark deposit rate now appears to be close to zero.”

The worst is over for developing-world debt markets, according to Denise Simon. “We’re not looking at any other countries at risk of a credit impairment in the near future,” said Denise. “These countries [Ukraine, Indonesia, and Mexico] have shown that they’re not going to use an unprecedented crisis as an excuse not to pay.”

“They recognize that it’s much easier to work on negotiating relief with one institution or one country,” she said. “When you’re dealing with private sector, you have to deal with all these investors, and it’s a much more complicated process.” Emerging-market currencies may also rebound later this year, which will help alleviate concern of a mismatch. Opportunities could arise in parts of Asia such as India, Malaysia, and Indonesia, she said. Currencies from small, open eastern European economies could also be worthwhile, she said.

On Record Corporate Debt Issuance on the Back of Fed Support

The increase in capital markets fees speaks to the strength of diversification at the banks, which have set aside more money to cover expected losses on loans, said Robert. “Debt underwriting fees really help counterbalance some of that,” he said. “But overall net income for the banks, like we saw in the first quarter, will be down materially year-over-year.”

“It has been an incredibly intense four months because we were trying to bring so many companies to market,” said Richard. How much volumes fall in the second half of the year depends on how the pandemic proceeds, Citigroup’s Zogheb said. If the virus is brought under control, companies could turn their attention to acquisition financing and sponsors could pursue new leveraged buyouts, which could lead to a more normal level of issuance, he said. But if there are flare-ups or a second wave, then acquisitions would likely remain on hold, Zogheb said. Companies could raise new bonds for more liquidity, he said. But it probably will not happen at the same pace as in the first half, because many companies raised enough cash earlier this year to fund them through another wave of the virus.

“COVID-19 is now inversely related to the markets. The worse that COVID-19 gets, the better the markets do because the Fed will bring in stimulus. That is what has been driving markets,” said Andrew.

“Investment grade and high yield bonds had an incredible quarter in terms of issuance and performance. We just continue to see more and more money flow into those markets,” said Ted. “But there’s been so much new issuance in the second quarter, you get concerned you’re not going to see a ton of new issuance in the third quarter.”

“The tightening of sovereign spreads that we have seen is conditional on the ECB continuing and spending the entire amount,” explained Andrew. “If this idea of ​​quitting early becomes official communication from the ECB, I think you will see the markets fall out of bed.” Investors hope to be reassured that the slowdown is due to a summer lull in the markets rather than an effort by the central bank to gradually reduce purchases, added Bouvet. 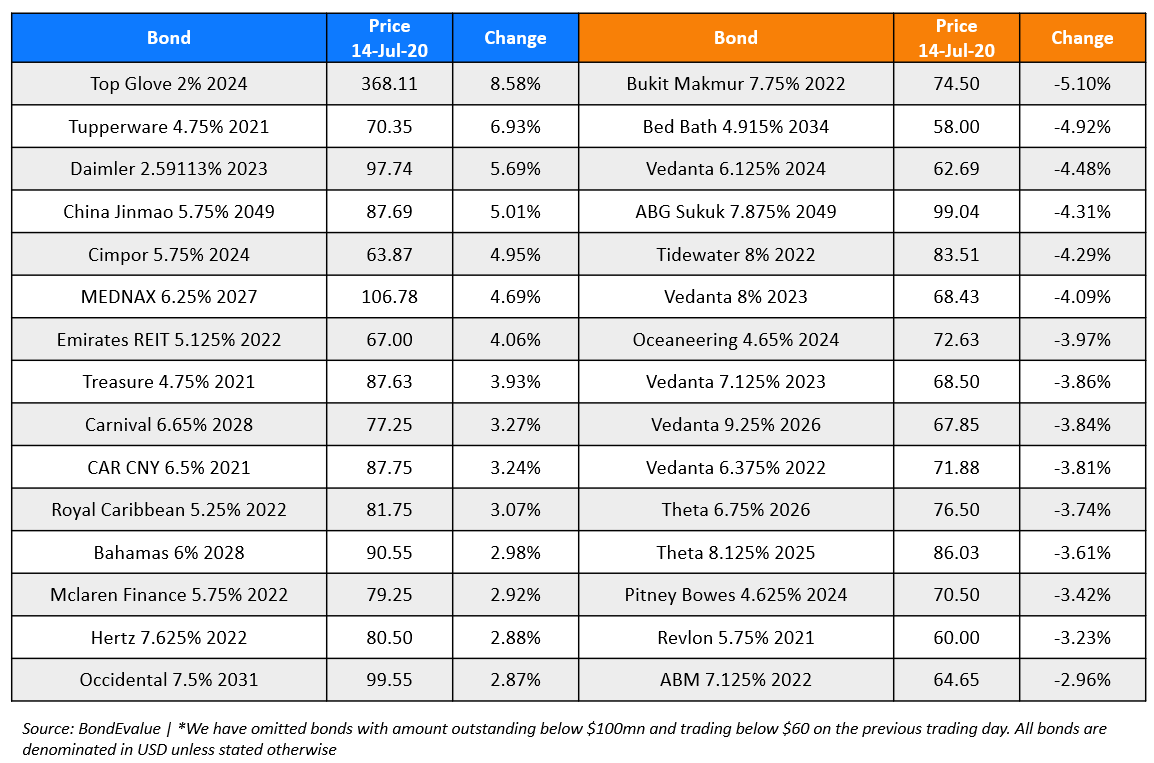