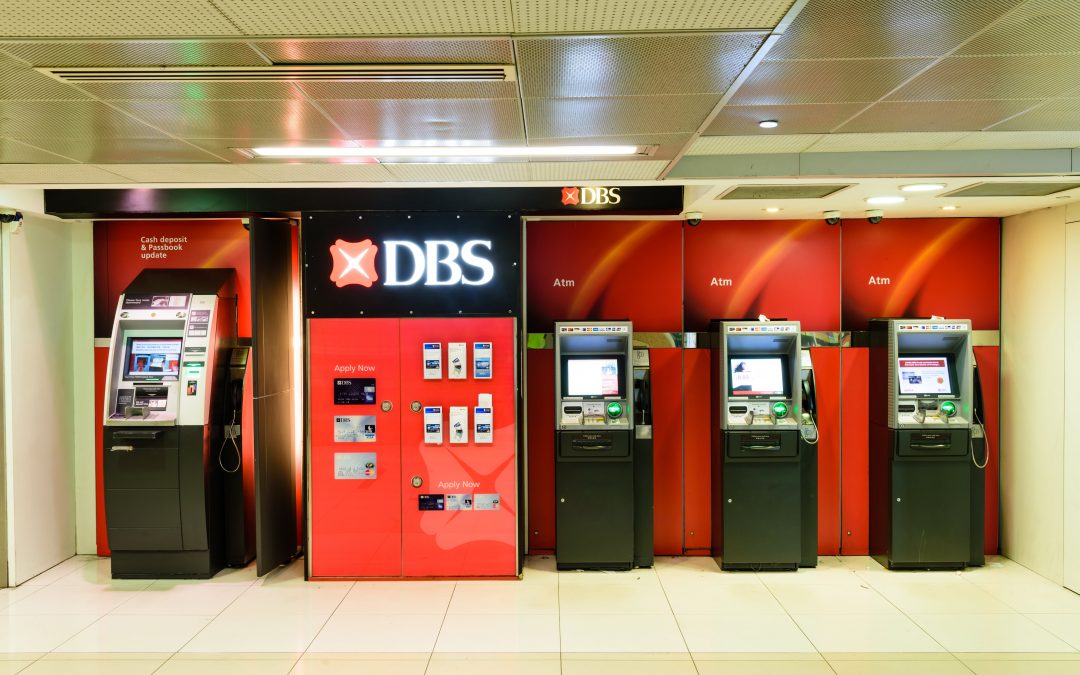 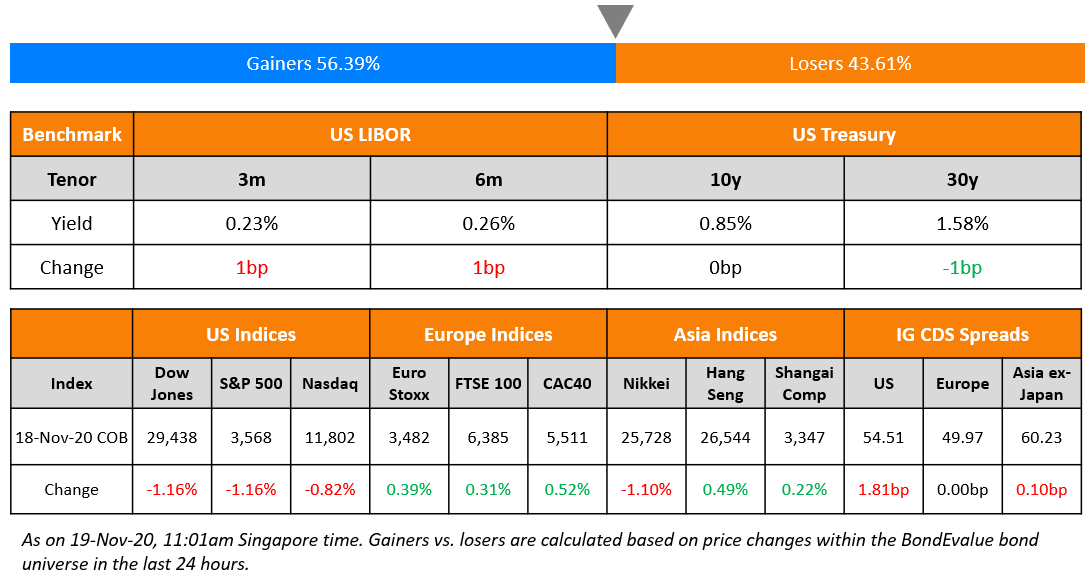 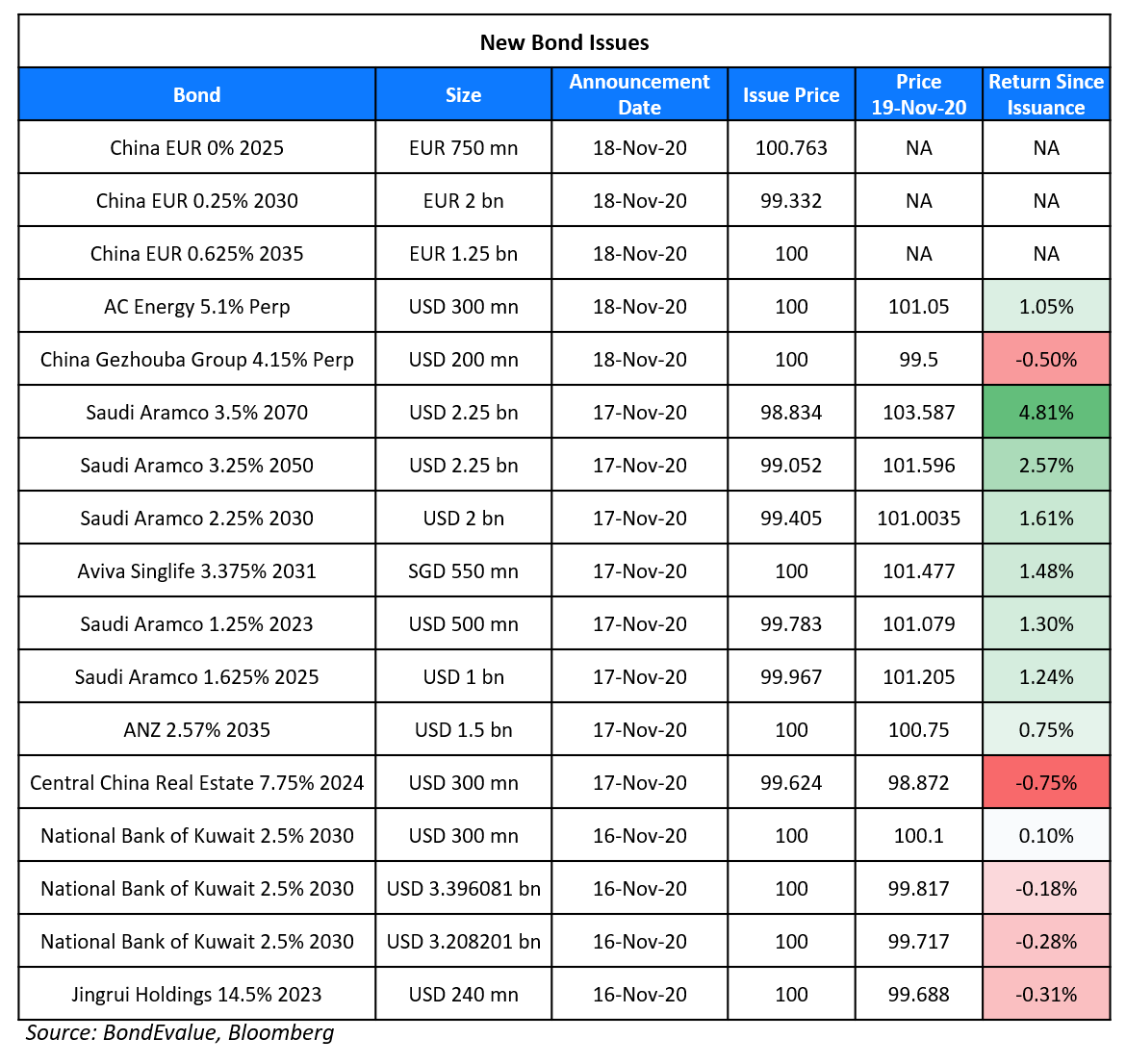 AC Energy raised $300mn via a Perpetual non-call 5Y (PerpNC5) green bond at a yield of 5.1%, 30bp inside initial guidance of 5.4% area. The deal received orders of over $1.45bn, ~4.8x issue size. The unrated senior fixed-for-life perpetual bond comes alongside a concurrent tender offer of two outstanding notes – $400mn 5.65% guaranteed undated notes, $360mn 4.75% 2024s. Wholly owned subsidiary AC Energy Finance International is the issuer and AC Energy is the guarantor of the new notes as well as the outstanding bonds. The issuer aims to actively manage its liability programme with the tender offer.

ESG Bonds – How Different (or Not) Do They Trade vs. Non-ESG Bonds?

The concept of Environmental, Social and Governance (ESG) bonds is not new to the markets – the first such bond was issued by European Investment Bank over a decade ago in 2007. However, the awareness towards these bonds, particularly social bonds, has grown many folds in 2020.  The most noteworthy issuance thus far has been the European Union’s issuance of SURE bonds, social bonds with proceeds earmarked for mitigating unemployment in its member nations due to the Covid-19 pandemic. 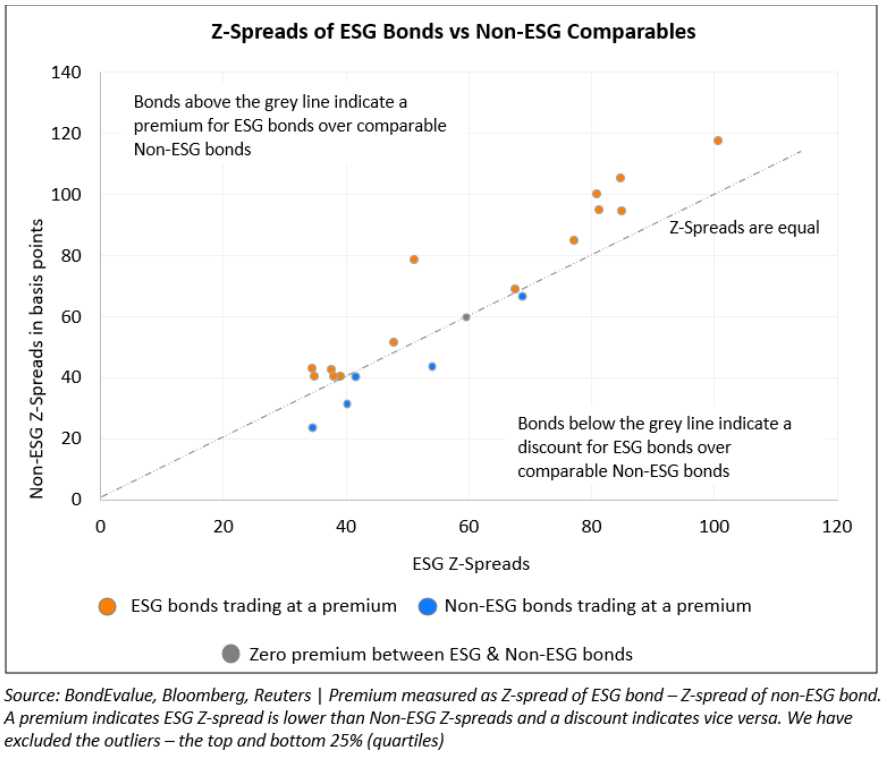 There has been a debate on whether ESG bonds trade at a premium – tighter (lower) in terms of credit spreads – to conventional non-ESG bonds. To answer this question, we conducted a study of 40 bond pairs – each pair consisting of an ESG bond and a non-ESG bond issued in 2020 by the same issuer and having a similar duration. We compared the Z-spread, a measure of credit spread, between the two bonds in each pair.

The bonds, rated A1, received orders over €17.8bn ($21.2bn), 4.4x issue size. Europe took the majority of the issuances across the three bonds at 72% followed by Asia at 26%. The 5Y tranche marks China’s first negative yielding bond. Bank of China, Bank of Communications, China International Capital Corporation, BofA Securities, Crédit Agricole CIB, Deutsche Bank, Goldman Sachs (Asia) L.L.C., HSBC, J.P. Morgan, Societe Generale, Standard Chartered Bank and UBS were Joint Lead Managers and Bookrunners.  The planned issuance follows their EUR issuance last year where they raised €4bn ($4.4bn) across 7Y, 12Y and 20Y bonds with a demand of nearly €20bn ($22bn). Bloomberg reports that China, rated A1/A+/A+, is said to be turning to the European bond markets due to recent tensions between the nation and the US where Trump plans to take new hardline moves against China.

Tsinghua Unigroup which has defaulted on an onshore bond is seeking suspension of trading of US dollar bonds worth $2.45bn as reported by IFR. The bonds to be suspended are as follows.

Tsinghua Unigroup had defaulted on CNY 1.3bn ($197mn) of domestic bonds that matured on Nov 16  due to tight liquidity. According to IFR, “Market participants expect the Tsinghua University-backed chipmaker to undergo a debt restructuring similar to the government-led reorganization of Peking University Founder Group.”

Chinese Companies May Be Banned From Buying Own Debt issuance

China is set to tighten debt issuance rules for its companies. According to interbank bond market regulator, companies or related entities would not be allowed to buy their own debt issuance with their own capital. The National Association of Financial Market Institutional Investors (NAFMII), a self-regulating body under China’s central bank, said the new rules are to improve the standardization of debt financing. The rules which would be implemented in a phased manner till Feb 1 2021 will also bring in more transparency as the related parties would be required to disclose their purchases of the issuer’s debt under the new rules. Although, the rules come at a time when there have been a series of defaults by the Chinese state-owned enterprises (SOEs), a senior securities firm source said the rules had been circulated weeks earlier and opined that “I don’t think it’s related to the defaults,”.

FAA Administrator Steve Dickson signed an order which will return the Boeing 737 to American skies on Nov 18. The order rescinds the earlier order which had grounded the aircraft involved in the twin crashes of Lion Air and Ethiopian Airlines. The order said “The FAA Emergency Order Prohibition issued March 13 2019, applicable to Boeing Company Model 737-8 and Boeing Company Model 737-9 airplanes, is rescinded…  This rescission enables operations of Boeing Company Model 737-8 and Boeing Company Model 737-9 airplanes only upon satisfaction of applicable requirements for return to service.”  The FAA also published an Airworthiness Directive with details of the design changes required before returning the aircraft to skies and also issued a Continued Airworthiness Notification to the International Community (CANIC), and published the MAX training requirements. The order however, made it clear that these these actions do not allow the MAX to return immediately to the skies and would require more actions including approval of pilot training program, maintenance steps required to prepare the parked aircraft etc.

The Reserve Bank of India (RBI) prepared a draft scheme of amalgamation of Lakshmi Vilas Bank (LVB) with DBS Bank India Ltd. (DBIL). DBIL is a wholly owned subsidiary of DBS Bank Ltd, Singapore. The move would require DBS injecting INR 25bn (S$463mn/$345mn) of fresh capital into its wholly owned India subsidiary DBS Bank India. Chennai based LVB has been struggling over the last few years and was put on moratorium by the RBI on Tuesday, similar to that of Yes Bank in March 2020 – a 1-month moratorium on LVB with deposit withdrawals capped at INR 25,000 ($337). The RBI also unveiled the proposed amalgamation with DBS.

For DBS which has only around 30 branches in India, the amalgamation would provide access to over 560 branches and 970 ATMs across the nation however, would also bring some Non-Performing Assets (NPAs). “DBS will gain a ready customer and deposit base worth 210 billion rupees which otherwise would be challenge to build for a foreign bank,” said Mona Khetan, an analyst at Dolat Capital. DBS said the proposed amalgamation would provide “stability and better prospects” to LVB’s customers and employees during this uncertainty and allow DBS India “to scale its customer base and network, particularly in South India, which has longstanding and close business ties with Singapore”.

Argentina awaits progress on IMF talks aimed at clinching a new debt financing program. The program would help in repaying a $44bn loan from a 2018 standby lending agreement with its first repayments due in September 2021. Of the $57bn promised by IMF through a deal in 2018 (a deal signed by the previous administration to halt a run on the local currency and avoid a sovereign bond default) only $44bn had been disbursed before the current government cancelled the pact. Peronist Party Senators said in a letter earlier this week that the IMF should refrain from attaching conditions to a new programme and publicly accept its share of responsibility for Argentina’s ongoing crisis. They also pushed for a 5-year grace period before repaying the $44bn loan. Last month the IMF said that their staff will engage closely with the authorities and go to Buenos Aires in mid-November to initiate discussions on a new IMF-supported program. USDARS has been on a free fall this year, down ~34% YTD. Argentina’s dollar bonds have been trading at distressed levels. Their 0.125% 2030s are up 0.13 to 39.83 and the 0.125% 2041s are up 0.07 to 38.31.

Equity Interest Purchase Undertaking (EIPU) is a deed where an onshore parent agrees to purchase equity interest in their offshore subsidiary. This purchase acts as a way of transferring funds offshore with the proceeds going to service interest and principal payments on the bond. This is different from guarantees. In China for example, guarantees require registration and approval from State Administration of Foreign Exchange (SAFE), but keepwells and EIPUs/asset-purchase deeds do not. EIPUs generally come as part of keepwell deeds. An example of an EIPU can be observed in the prospectus of the 4.7% 2021s issued by Nuoxi Capital, guaranteed by Hong Kong JHC with both the issuer and guarantor being subsidiaries of Peking University Founder Group Company.

“We shouldn’t let our investors get crushed by high interest,” Erdogan said. “Our goal is to reach single-digit inflation as soon as possible.”

“Erdogan has probably agreed to give Agbal room to maneuver for now, but the speech today was probably meant to show that he has not fundamentally changed his mind,” said Hammarlund. “Another boom-bust cycle is just around the corner next year.”

On US lawmakers failing the country in their inability to reach a compromise on fiscal stimulus – Jamie Dimon, JPMorgan Chase & Co chief executive officer

“We have this big debate: Is it $2.2 trillion, $1.5 trillion? You’ve got to be kidding me,” Dimon said. “Just split the baby and move on. This is childish behavior on the part of our politicians.” “There’s a big part of our country which is really struggling,” Dimon said. “That’s what we should be focusing on. It has zero to do with Democrats and Republicans. It’s got to do with helping those people get through the toughest part of Covid, and we’re not through with it yet.”

On the shrinking share of US debt held by foreign investors

“As the Federal Reserve threw the kitchen sink at the markets in order to keep U.S. dollars flowing around the world, their holdings of Treasury securities have grown astronomically,” Blaha wrote.

In a note by Thomas Simons and Aneta Markowska, Jefferies economists

“Demand from Japanese investors — and foreign investors on the whole — is not keeping up with the pace of issuance,” Simons and Markowska wrote.

In a note by Vickie Chang and team, Goldman Sachs Group Inc. strategists

“Access to capital is as available as we’ve ever seen it,” said McClain. “Fundamentals don’t matter.”

“For 2021, interest rates are going to stay low and people want real yields, so they’re going out the curve and going out the credit spectrum,” said Brenner.

“Everyone is playing the same game,” said Pettis. “People expect the government to bail everyone out because it would be too messy if they don’t. But that kind of attitude is self-reinforcing and makes everything worse.” 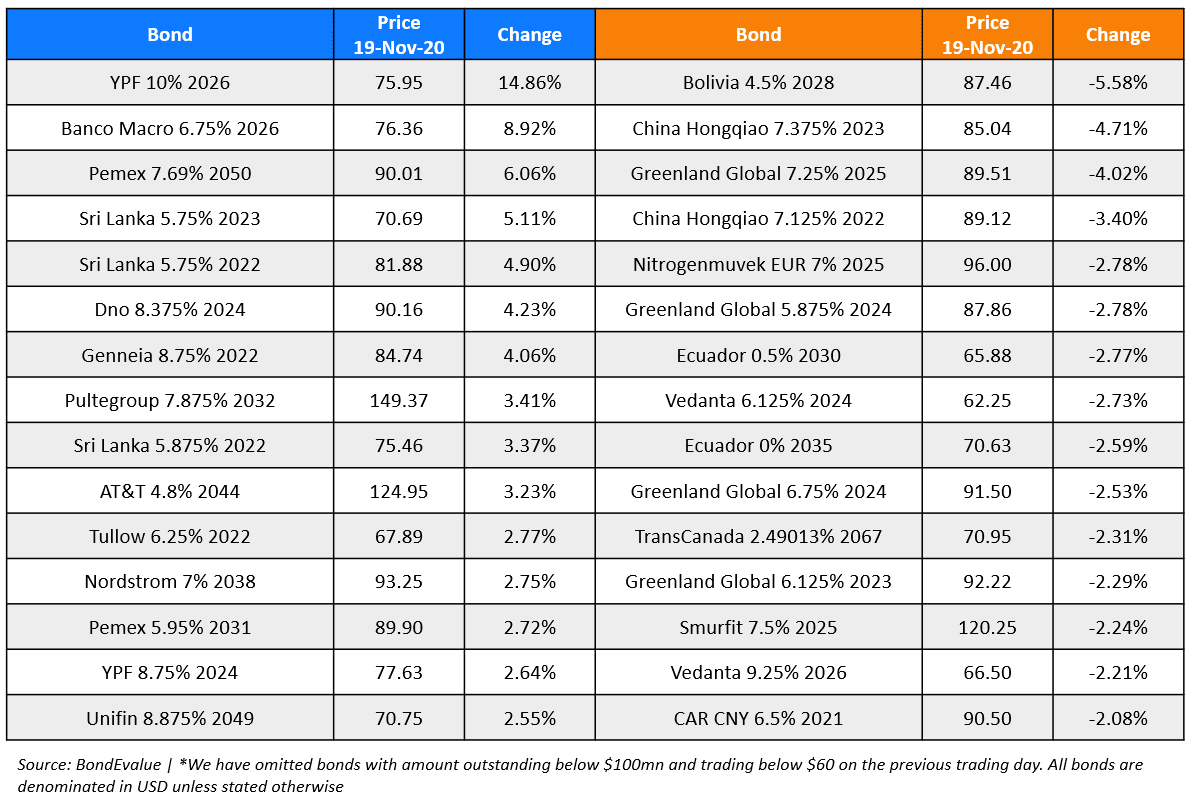