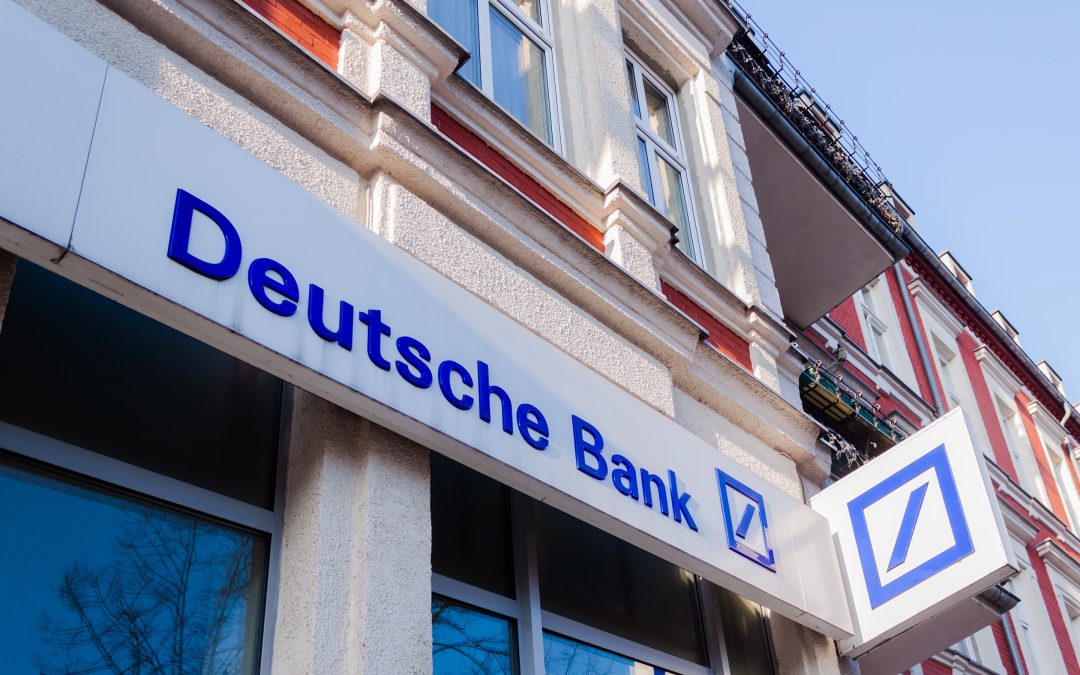 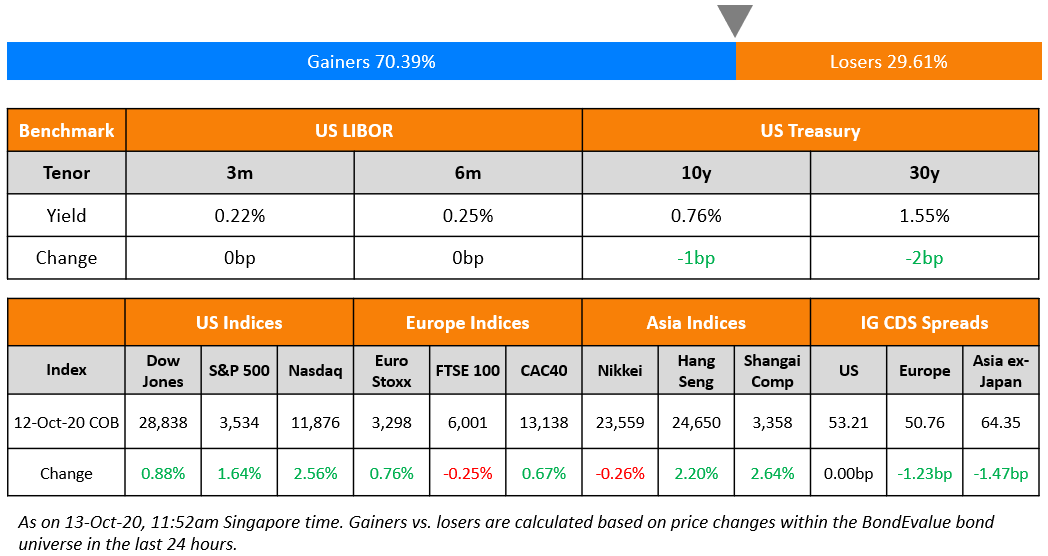 S&P trended up by 1.6% led by tech and consumer discretionary sectors, which were higher by ~2.5%. Apple and Amazon were up 6.3% and 4.8% respectively ahead of their respective 5G iPhone launch and Prime Day events. US big banks to report Q3 earnings in the following 3 days. The US Treasury market was closed on account of Columbus Day, while Treasury futures were almost unchanged. US stimulus talks continue to walk a tightrope with no outcome yet. US IG and HY CDS spreads were flat. European IG CDS spreads tightened 1.2bp while Crossover spreads were tighter by 10bp. Asian markets are mixed in trade today with Asia ex-Japan CDS spreads tighter by 1.5bp. 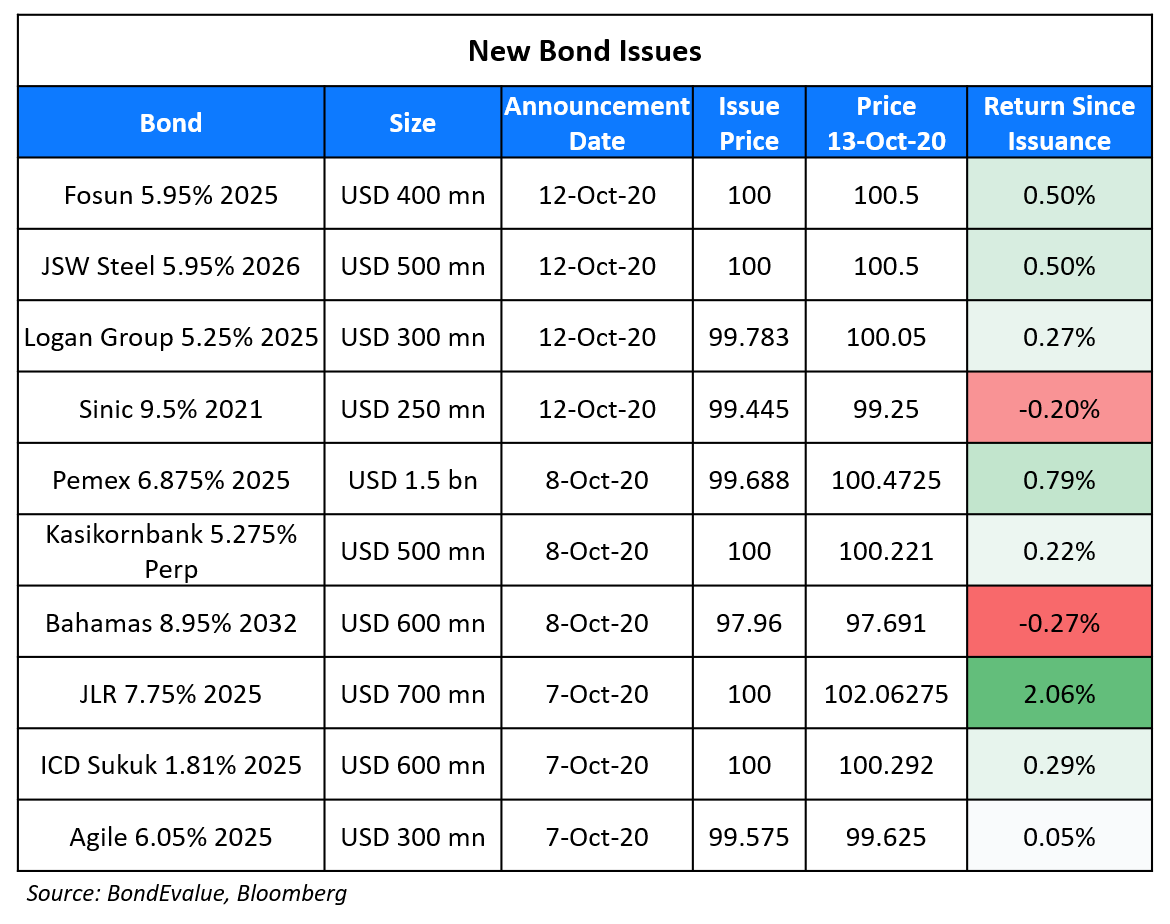 Fitch Revises Lagos’s Outlook to Stable on Sovereign Action; Affirms at ‘B’

Moody’s changes the outlook on CMA CGM to positive; B2 ratings affirmed

Fitch Affirms BNP Paribas’ Long-Term IDR at ‘A+’ with Negative Outlook; Off RWN

Deutsche Bank’s AT1 Perpetuals Upgraded to BB- by Fitch

Fitch upgraded Deutsche Bank’s Additional Tier 1 (AT1) perpetuals to BB- from B+ on Monday. The perpetuals upgraded included two dollar bonds (7.5% and 4.789%), one euro (6%) and a sterling (7.125%). Fitch justified the upgrade by stating, “Deutsche Bank’s CET1 ratio rose to 13.3% (+42bp) in 2Q20, in contrast to our expectation of a decline, helped by repayments of revolving credit facilities, reduced exposure in the capital release unit, reversal of most of the 1Q20 prudential valuation impact, as well as a modest 11bp from regulatory relief. Its total capital also improved due to Tier 2 issuance in May and July.” Fitch noted that they could further upgrade the notes if the bank’s restructuring efforts, revenues and cost reduction improves. In the tables below, we have listed dollar and euro AT1s from European banks with a similar rating to Deutsche’s AT1s – sorted by yield.

To learn more about AT1 perpetuals, sign up for our upcoming masterclass on October 29 at 2pm Singapore/Hong Kong. More details to follow.

Some of China Evergrande Group’s largest lenders are said to be reducing exposure to the developer, adding to concerns over its financial position. Bloomberg reported that Evergrande’s largest creditor, China Minsheng Bank has informed its branches to “avoid new unsecured loans to the developer and reduce overall financing, including through the bond market”, people familiar with the matter said. One of the person added that the regulators have reached out to Minsheng to urge them to better manage their Evergrande risks after a lack of sufficient collateral was found for some of its short-term loans. Other creditors said to have adopted a similar approach are Agricultural Bank of China, China Zheshang Bank and ICBC. Evergrande has been in the news over the past few weeks after an allegedly fake document instilled fear among bond investors, leading to a huge sell-off in its bonds in late September. The bonds have since recovered after the company secured commitment from strategic investors to not demand repayment and strong sales numbers reported last Friday.

In related news, Evergrande is planning to raise CNY 2bn ($296mn) via a local currency bond issuance later this week with a 5Y tenor and an indicative pricing of 5.50-5.75%, as per Bloomberg. This will be its first issuance since the liquidity fiasco last month and will be a test of investor confidence. The developer has aggregate repayments (local and offshore) of $4.8bn in October and November as per Bloomberg. In the chart below, we have compared how Evergrande’s local and similar maturity offshore bonds traded over the past few months. 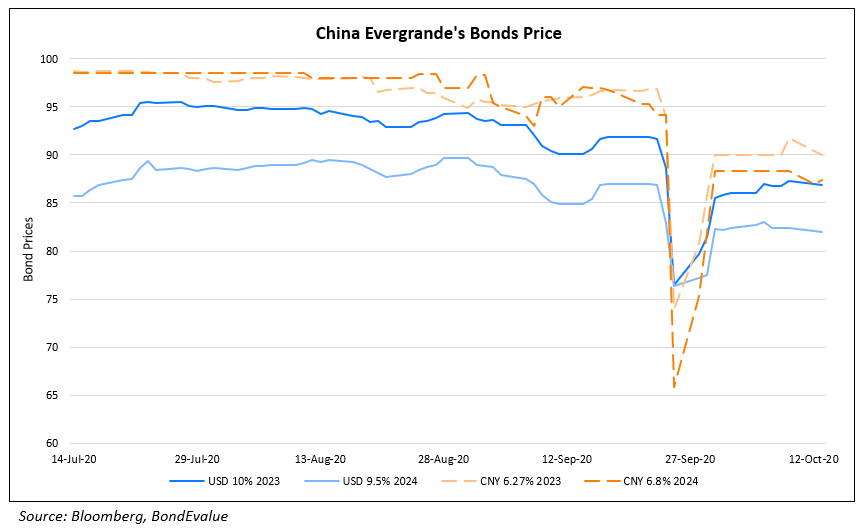 All But One Vedanta Dollar Bonds Collapse As Delisting Fails

Vedanta Resources Ltd. (VRL), rated B1 by Moody’s saw its dollar bonds crash over 15% on Monday as efforts to delist its Indian subsidiary Vedanta Ltd. failed. The delisting and privatisation was expected to help the company and its holding company Vedanta Resources’ operational and financial structure. The delisting could have helped the parent company consolidate its financial structure better by unlocking future cash excesses and a portion of current cash to the tune of roughly $2bn in its operating subsidiary Vedanta Ltd, which stands at ~$4.5bn. Recently on August 18, VRL raised $3.15bn particularly for the delisting of Vedanta Ltd – $1.4bn via a 13% 2023 amortizing bond alongside a $1.75bn 3Y term-loan facility. The amounts raised were placed in an escrow account for the delisting. In the event that the delisting became unsuccessful, the issuer was required to redeem these bonds by a certain long-stop date based on a Special Mandatory Redemption (Term of the day, explained below) clause in the 13% 2023s prospectus. The term loan too would also be unwound in the event of an unsuccessful delisting. The terms in the prospectus requires that VRL pays 101% of the face value of the 13% 2023s as redemption along with accrued interest. This particular ‘special mandatory redemption’ protection helped the 13% 2023s fall by just ~2 points to 100.9, a small move compared to the massive decline in its other bonds. 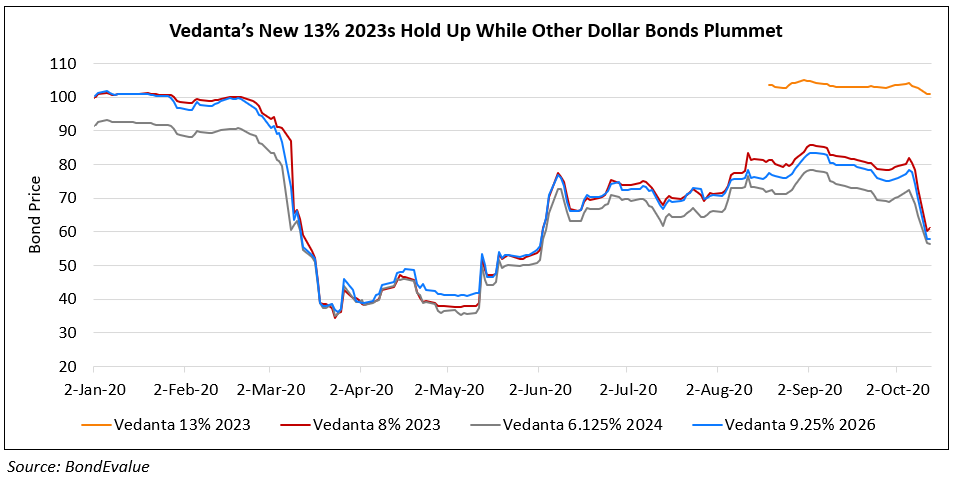 Tesla Upgraded from B+ to BB- by S&P

S&P Global upgraded the issuer rating of Tesla as well as the issue-level ratings on its unsecured debt to BB- from B+ on October 12. The rating agency cited additional liquidity from stock issuance and better than expected sales of ~140,000 vehicles in Q3 as reasons for the upgrade. Tesla’s bonds had reacted positively to the news of the company raising ~$5bn through the sale of equity earlier in September. S&P has taken note of the ongoing global expansion and improving manufacturing, which has allowed it to strengthen its competitive edge. Tesla holds 80% share in the battery-operated electric vehicle market in the US and has plans to expand to build a Gigafactory in Berlin and Texas to boost its manufacturing capacity. Tesla’s rating is still three notches into junk. The rating agency had earlier upgraded Tesla from B- to B+ on July 29 on growing profitability after the California-based carmaker reported its fourth successive quarterly profits. Moody’s had also upgraded Tesla’s rating to B2 from B3 on July 23. The rating agency expects the demand for Tesla’s EVs to continue to grow and sees an upside if there is an increase in production of Tesla’s Model 3 in China and Model Y. The downside could come if  demand in EVs is less than the installed capacity or if there are challenges faced to the expansion plans or by intensified competition. Tesla’s peer Toyota is rated A+ and A1 by S&P and Moody’s respectively. We have summarized the rating actions on Tesla in the table below.

Chinese Renminbi was on a historic rally against the dollar last week before the People’s Bank of China (PBOC) intervened by removing the requirement of holding reserves to buy foreign currency forward contracts on Saturday. After the announcement, the renminbi fell by ~0.9% to CNY6.754 against the dollar, a drop not seen since the March market rout. The move by the central bank is seen as one to control the rise of the currency to ensure that the country’s manufacturing retains an edge. The Chinese currency has been trending higher on the back of foreign investors interest in Chinese bonds and stocks. PBOC had in 2015, mandated banks to hold 20% of the amount of a forex transaction to slow the depreciation of the currency and to prevent the foreign investors’ exit.

As per Ken Cheung, chief Asian foreign exchange strategist at Mizuho Bank, “The PBOC took a pre-emptive action to slow the pace of renminbi appreciation,”. Michelle Lam, Greater China economist at Société Générale said, “This move by itself does not have any implications for the renminbi going up or down,” adding that, “Instead, in the longer term, relatively high Chinese interest rates will continue to attract demand for renminbi bonds”. In the chart below we show the CNY/USD currency along with the PBOC’s actions to mandate and remove the requirement of reserves.

This is a compulsory prepayment which has to be made on part of the issuer at a particular redemption price if certain events take place. Such events could range from a termination of an acquisition prior to a longstop date, occurrence of default under a particular section/clause, failed delisting plans of subsidiaries for which the debt is raised etc. In Vedanta Resources’ (VRL) case, the delisting of its subsidiary for which the 13% bond due 2023 was raised had failed and based on the terms of the prospectus, they would have to redeem the outstanding bonds at a redemption price of 101% of par.

On the expectation that the UK economy could struggle more than forecasted to recover from coronavirus crisis – Andrew Bailey, Bank of England Governor

“We think the risks unfortunately are all on the downside,” Bailey said.

“We are moving towards fiscal union, a major step forward in the financial capacity and sovereignty of the EU,” Scholz said. “Markets have confidence in European policies and in the development of European economies,” said Scholz. “We should carry on with this course,” he added.

“I think there may be compromise language that may be a six-month extension (and) that it can be renewed depending on debt sustainability,” Malpass said. “That dialogue hasn’t been as robust yet as I think is necessary to move this process along.” Malpass said the debt service suspension initiative has ramped up more slowly than expected because “not all the creditors are participating fully,” including China.

On the need to dial back crisis-level stimulus without disrupting the economy – Ravi Menon, Managing Director of Monetary Authority of Singapore

“We are aware of the risk of prolonging support, but we are also withdrawing support prematurely. The key thing here is not to maintain the crisis-level support, but to start tapering, pivoting … without pulling the rug out too suddenly.”

“The events from the onset of the pandemic have only accelerated the growth of fixed-income ETFs,” said Bartolini.

“There’s a variety of ways they can be used in portfolios, and I think that helps to draw a more diverse investor base,” said Perlman.

“We’re already in record territory, and we’re likely to blow that record away, given the volatility headed into an election,” said Rosenbluth. “Institutional investors are getting more comfortable using ETFs to gain more targeted exposure” instead of buying individual bonds, Rosenbluth said.

On the rally of Santander debt as investors bet on redemption – Jerôme Legras, managing partner of Axiom Alternative Investments

“This is one of the weirdest things I’ve ever seen in markets. It is one for the history books,” said Legras. “Usually, a bond price will fall if a bank is perceived to have issues with paying. But in this case, it rose.”

“The unprecedented volatility in global financial markets, with the US presidential election approaching, is likely to benefit the iBonds’ sales,” said Wen. “To most investors, it’s still a near-zero-risk investment.”

“The iBond is basically a safe investment,” said Leung. “It would probably attract people who are older, more conservative, who usually don’t trade stocks and just let their money sit in bank deposits.” 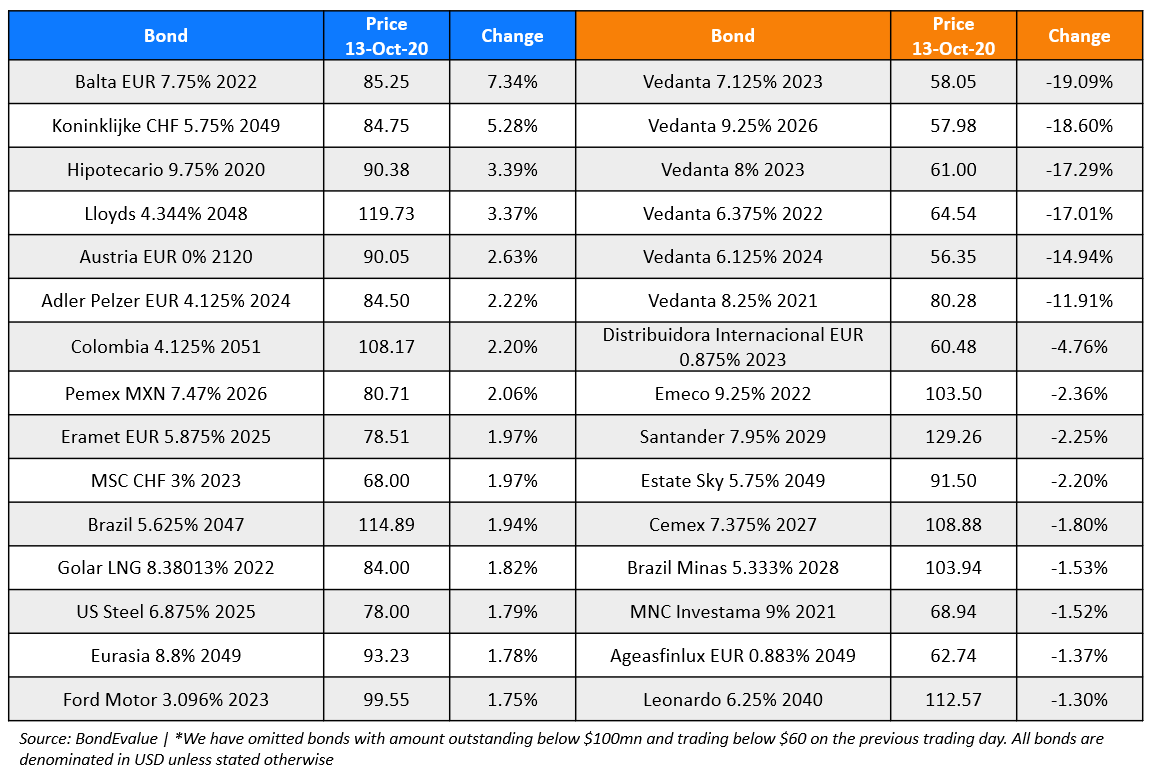