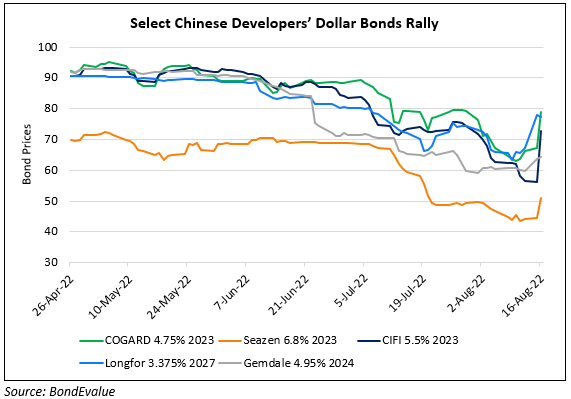 Dollar bonds of several Chinese developers like Country Garden, CIFI, Longfor, Seazen and Gemdale rallied over 10% on Tuesday. Sources said that Chinese authorities told several developers that state-owned credit support provider China Bond Insurance Co. will provide unconditional and irrevocable guarantees for some of the above developers’ upcoming onshore bond offerings. Investors are viewing the move as an indication of support extended by the state. Bloomberg Intelligence analyst Dan Wang commented, “The government may have realized it is easier and cheaper to support property developers by helping them issuing bonds than to deal with their unfinished projects after they default in order to preserve social stability.”

Separately, a unit of Longfor Group has planned to issue a yuan bond worth RMB 1.4-1.7bn ($210-250mn) with proceeds partly to be used for the developer’s offshore bonds.