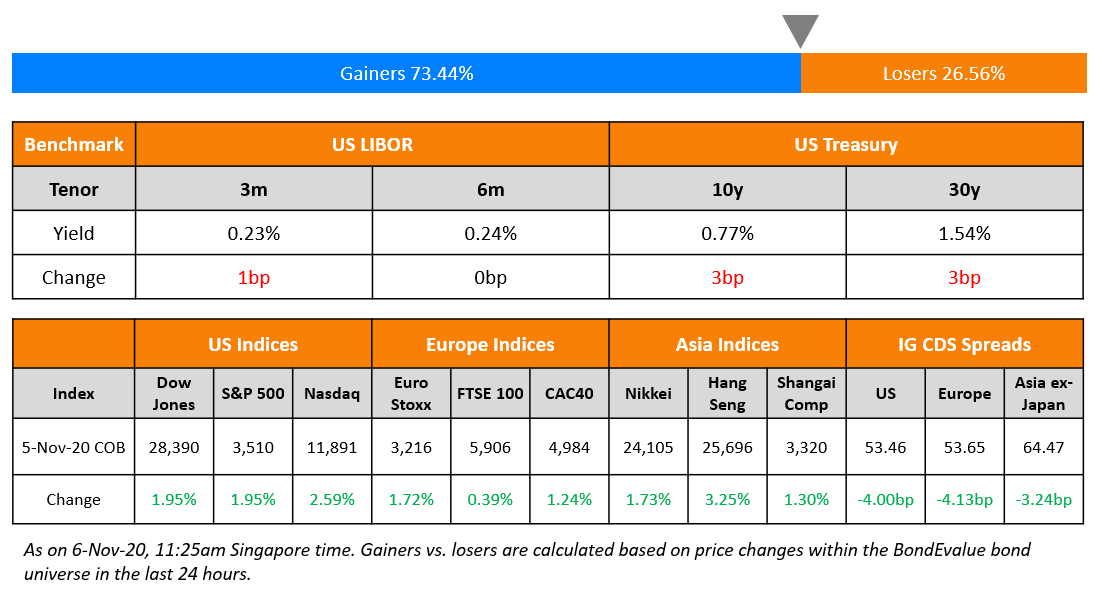 US equities continued to rally with the S&P and NASDAQ up 1.9% and 2.6%. Similar gains were seen in European equity indices. The FOMC meeting was a non-event with Chairman Powell noting that they could shift the composition, duration, size or the life cycle of the program to provide more support. Treasury yields widened with the 10Y and 30Y up 3bp at 0.77% and 1.54%. US election results are titled towards Biden taking the presidency for now. Republicans are on track to win the Senate unlike the blue-sweep polls had expected – this could imply less chance of tax hikes and fewer anti-trust cases. The Bank of England announced a bigger-than-expected £150bn ($195bn) increase in its bond-buying programme and UK Chancellor Rishi Sunak extended the government’s expensive coronavirus furlough scheme. US investment grade CDS spread narrowed 4bp while HY narrowed 21bp. Europe main and crossover CDS spreads tightened 4bp and 19bp respectively. Asian equities are higher ~0.3% with Asia ex-Japan CDS spreads tighter by 3bp.

Back on popular demand, we have introduced new dates for our Bond Traders’ Masterclass series. The series will be conducted across five sessions, designed for private bond investors and wealth managers to develop a strong fundamental understanding of bonds. The sessions will be conducted by debt capital market bankers with over 40 years of collective experience at premier global banks. Click on the image below to register.

Fitch Upgrades CSN to ‘B+’; Outlook Revised to Positive

Fitch Downgrades the Maldives to ‘CCC’

The FOMC kept their policy rates unchanged with the Effective Fed Funds Rate/EFFR (Term of the Day, explained below) in the range of 0%-0.25%. It expects to maintain this target range until (a) labor market conditions reach levels consistent with their goals of maximum employment and (b) inflation moderately exceeds 2% for some time. The committee noted that it would increase holdings of Treasury securities and agency mortgage-backed securities (MBS) at least at the current pace to keep smooth market functioning and financial conditions accommodative. “At this meeting my colleagues and I discussed our asset purchases…we understand the ways in which we can adjust the parameters of it to deliver more accommodation if it turns out to be appropriate”, Fed chair Jerome Powell said, opening up possibilities of an action in December if the situation changes for the worse. Corporate bond purchases over the last month increased slightly by $1bn. 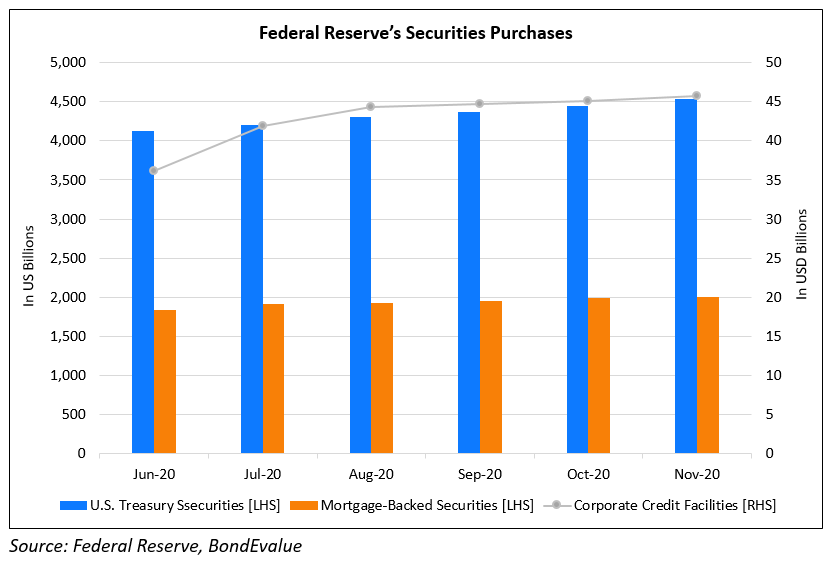 The archipelagic island nation of Maldives was downgraded by two notches to CCC by Fitch on Thursday. The rating agency cited “expectation of deeper and more prolonged external liquidity pressures” and an increase in the country’s debt as reasons for the downgrade. Fitch expects tourism activity to remain subdued in 2021 with a recovery to pre-pandemic levels only by end-2022. For context, Maldives hosted 9,538 tourists in September, just 8% of tourist arrivals in September last year. Fitch expects the Maldivian economy to contract by 30% this year, resulting in a debt to GDP of 110.7% from 62.6% in 2019. While its $250mn 7% dollar bond is due only in June 2022, the sovereign has external debt obligations aggregating $494mn due from Q4 this year through Q2 2022. In addition to this, Fitch states that it has $586mn in government-guaranteed debt that needs servicing ($277mn in 2021). The economic shock from the pandemic has made the country reliant on support from supranational organizations and other nations, including:

Carnival Corp Downgraded Two Notches to B from BB-

Cruise operator Carnival Corp was downgraded two notches by S&P to B from BB-. Reasons for the downgrade included slower resumption of operations across the fleet and lower occupancy than S&P expected, which would lead to negative operating cash flows and weaker credit measures into 2021. S&P also downgraded all issue-level ratings of the company by two notches, in line with the downgrade of the company. S&P assumes revenue to remain meaningfully below 2019 by 50%-60% with anticipated lower occupancy, lower ticket pricing while capacity would remain ~30%, well below 2019 levels. S&P also assumes net cruise costs per available lower berth day (ALBD), excluding fuel, to remain elevated above 2019 levels into next year. All of the above would lead to EBITDA ~85-95% lower than 2019. Given the industry’s high capital intensity and the need to take delivery of ships regardless of the operating environment, Carnival’s credit measures are subject to high volatility. Carnival’s 6.65% 2028s are down 2 points to 79.1 on the secondary markets.

The IMF noted that Pemex’s business strategy required urgent modification in a press release report published on November 4. The IMF stated that Pemex’s budget execution has been considerably off-track as compared to their targets with the 2021 budget being cautiously optimistic in its outlook for production, while medium-term targets remain a major challenge. IMF Staff estimate free cash flow at ~1% of GDP in 2020. With short-term debt of ~1.5% of GDP and liquidity buffers less than 0.5% of GDP in mid-2020, Pemex may need additional fiscal support to refinance maturing debt if it is unable to rollover its debt. The company’s ability to rely on the international bond markets going forward has been impaired by the loss of investment grade status, the IMF noted.

With high debt levels of Pemex (~$107bn), it would require private sector expertise and cost rationalization. Yet, the Mexican authorities’ plans to attract private sector involvement are likely to fall short according to the IMF since they have relied on service company contracts till date as compared to allowing oil operators to take the risk. Given the above challenges and past corruption scandals, the IMF cites measures to be taken to strengthen cost procurement and corporate governance that include benchmarking against competitors and reporting on Pemex’s entitlements.

Emerging market (EM) sovereigns’ dollar bonds have rallied over the last one week alongside the rally in US Treasuries, particularly on Wednesday. “For the hard currency universe in emerging markets, a bit lower U.S. yields, more stability on the U.S. yield curve and a dovish Fed will keep very strongly the search-for-yield theme alive…that would certainly remain very supportive for hard currency debt in emerging markets and higher yielding fixed income more broadly”, said Valentijn van Nieuwenhuijzen, CIO at NN Investment Partners. Research from BofA showed that EM debt funds attracted $1.6bn in portfolio flows in the week ended October 28, the fourth week of of inflows as per Reuters. Below is a list of the top performing EM sovereign dollar bonds in our universe, sorted by price returns. 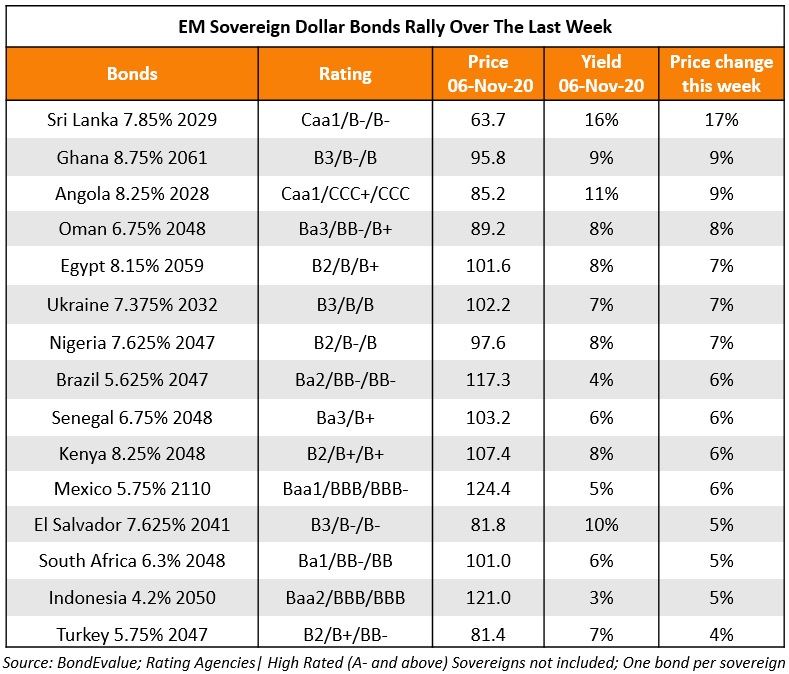 Bombardier Getting Probed By UK Authorities Over Suspected Bribery

UK’s Serious Fraud Office (SFO) said in a statement on Thursday that it is investigating Canadian plane maker Bombardier (CCC/Caa2/CCC+) over suspected bribery and corruption. The investigation is related to the company’s dealings with Indonesian state-backed carrier Garuda Indonesia, which purchased Bombardier CRJ regional jets with the first delivery in 2012.

CEO Eric Martel said in an interview, “A few weeks ago, we were informed by the SFO which also wanted to investigate Bombardier. I cannot comment, but we are very open and we will co-operate with the investigation.” The company reported Q3 earnings  on Thursday with total revenues of $3.53bn vs. $3.72bn last year and a net income of $192mn vs. a net loss of $91mn last year. However, adjusted net loss for the quarter stood at $215mn vs. a loss of $55mn last year. Bombardier’s 7.875% 2027s traded up by 3.5 points since Wednesday to 77 cents on the dollar while its 7.45% 2034s traded up 2 points to 72.5 cents on the dollar.

This is the policy interest rate set by the US Federal Reserve based on their monetary policy, which is typically stated in a range. Currently the Effective Fed Funds Rate (EFFR) is at 0.09%, in the range of 0%-0.25%. This is the rate at which banks lend to each other federal funds (money that banks deposit at Federal Reserve banks) for the purpose of maintaining reserves (statutory and excess) at the Fed. Banks with excess funds typically lend them overnight to other banks that are short on funds, rather than leaving those funds in their non-interest bearing reserve accounts at the Fed or as idle cash. These transactions are uncollateralized but are considered the risk-free rate since the money is held with the Fed overnight.

“They began to discuss the future of the asset purchase program but came to no conclusions yet. That leaves the door open for something new, either in terms of changing the pace or composition of asset buys or of introducing new forward guidance on the topic, in future meetings.”

“The Fed is being forced once again to shoulder more than its fair share of the burden of stimulus. Powell was optimistic that fiscal stimulus was possible. It seems clear it will now be less and occur later than needed.”

“I think they’re happy where they are,” he said. “If job numbers, say, started to turn south, maybe that would prompt some action, but it would take something significant for that to change.”

“We are predisposed to take on risk. Once we get past these next few weeks, the market’s focus will be much more constructive.” High-yielding bonds from the six-nation Gulf Cooperation Council, including the debt of Oman and Bahrain, are relatively cheap, setting them up for a rally in the coming months, according to Kronfol.

On the reasons investors are still buying government bonds

Brain says that while the world economy is presently performing at a level considerably below its long-term potential, and in recession, he believes the volume of support from governments and central banks will mean the “economic recovery will pick up speed next year”, at the same time as interest rates remain low, and government spending remains high. “Even though the yields are low, and you are potentially losing out on years of income, government bonds do offer protection. The bond buying programmes of governments aren’t going away, even if they are tapered back, and having a constant buyer in the market should help investors. And of course, in the event there is a worse economic downturn, the government bonds would likely rise in price and offer protection.”

Milburn said he owns the assets “because we always own sovereign bonds, and at the moment US government debt is the least worst option.”

“Thanks to the massive buying of bonds by the ECB and the very tight spreads on sovereign bonds…there is no need for us to put in place the sub-holding so the project remains a project.”

“Our plan is based on no M&A. We prefer to transform rather than integrate and use our excess capital to support the economy and pay it back to shareholders when allowed to.”

“Being able to issue in euros will really help us to diversify the platform and diversify the investor base,” Halpin said. “Covered bonds proved to be quite resilient through that stress period,” he said. “I think is a quite important tool treasurers to have at their disposal. 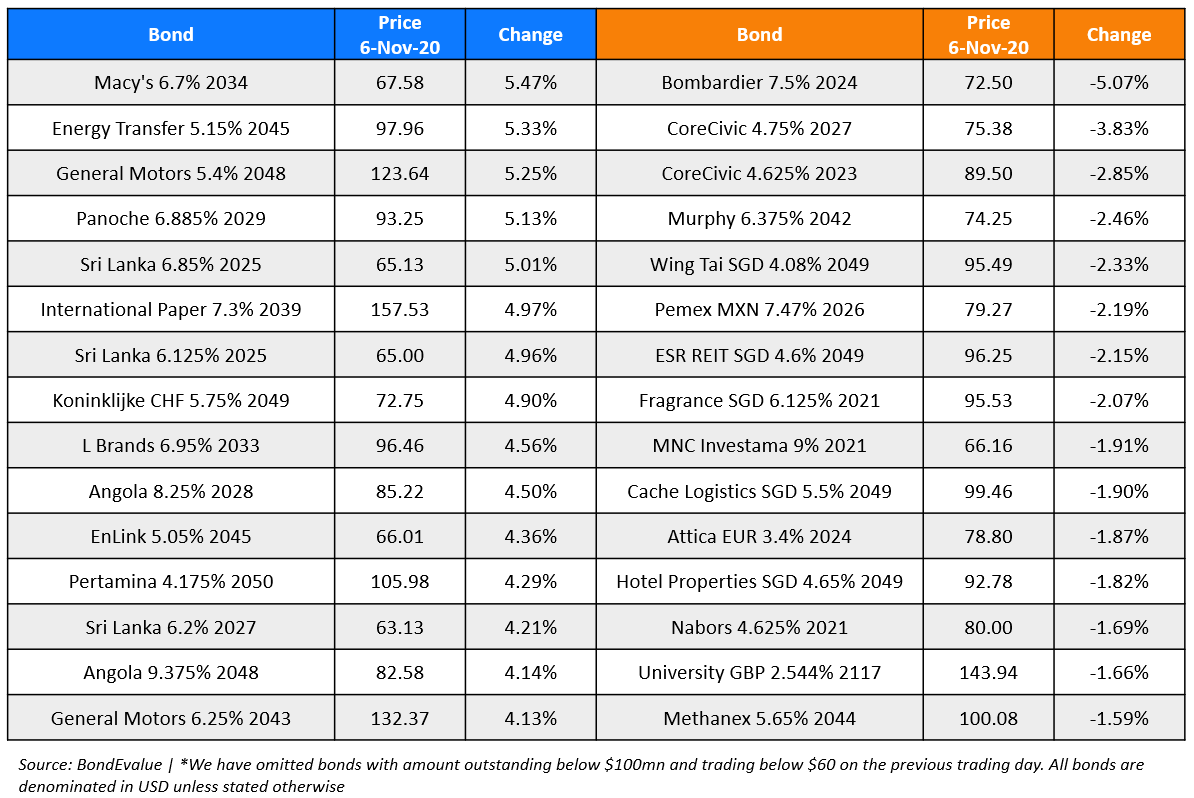