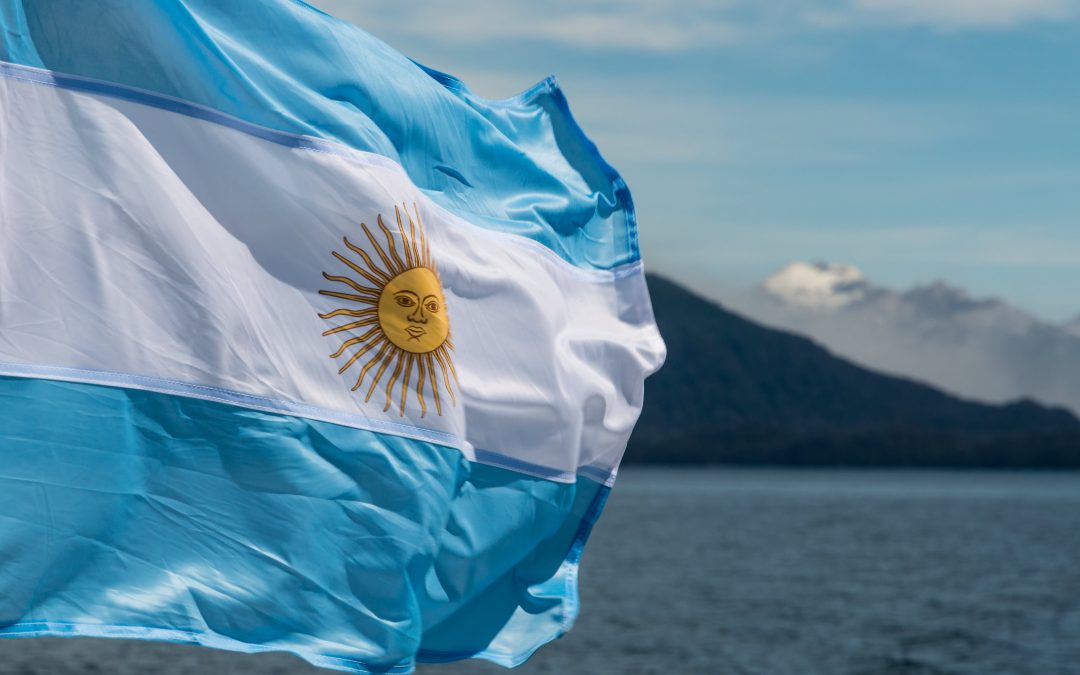 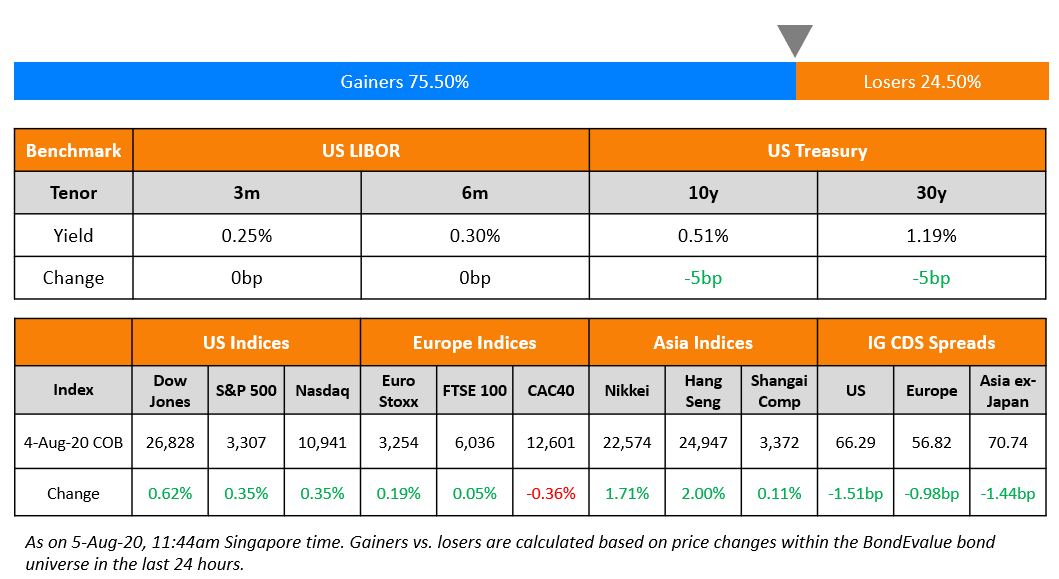 Wall Street saw moderate overnight gains as US lawmakers moved closer to a stimulus deal despite differences between the Democrats and the Republicans. Rallying energy stocks helped give all three major indices a moderate increase. European shares were mixed and long dated US treasuries saw strong bids as markets expect a longer economic recovery and continued Fed support. Credit spreads continue to grind lower but the deal pipeline seems to be slowing down amid the earnings season. Asian markets are opening lower this morning.

To find out more about our masterclass, click here. 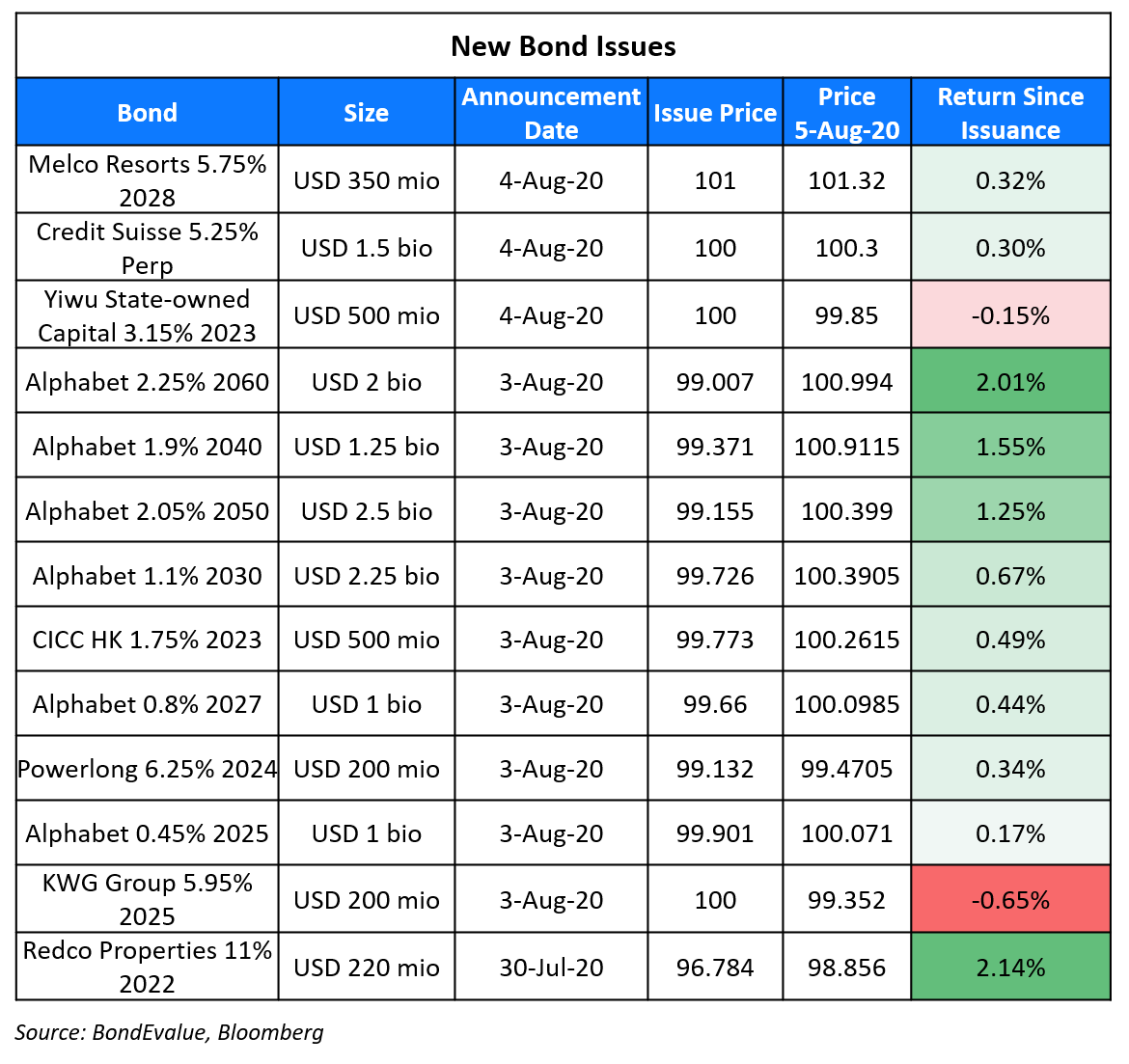 Credit Suisse raised $1.5bn via perpetual non-call 7Y (PerpNC7) Additional Tier 1 bonds at a yield of 5.25%, 37.5bp inside initial price guidance of 5.625% area. The bonds have an expected rating of BB–/BB+. If not called, the coupon will reset on August 11, 2027 and every five years thereafter to 5Y Treasuries plus the original issue spread of 488.9bp. The AT1s will convert to equity if the group’s common equity Tier 1 ratio drops below 7% (CET1 stood at 12.5% as of June 30). The pricing on the new AT1s is between its 6.375% PerpNC7 issued last August and its 5.1% PerpNC10 issued this January, which are currently yielding 5.13% and 5.3% respectively on the secondary markets.

Yiwu State-owned Capital Operation raised $500mn via 3Y bonds at a yield of 3.15%, 65bp inside initial guidance of 3.8% area. The bonds, with expected ratings of Baa3/BBB, drew final orders of over $2.9bn, 5.8x issue size. The notes will be issued by wholly owned BVI subsidiary Chouzhou International Investment and guaranteed by the state-owned parent company.

Moody’s downgrades Seven & i’s ratings to A2 on its announcement of the Speedway acquisition; outlook negative

Fitch Revises Outlook on Mizuho and Subsidiaries’ IDRs to Negative

After Ecuador, the Republic of Argentina reached a deal with creditors to restructure $65bn in sovereign debt. The deal is significant as the government had earlier hit a stalemate with creditors as President Alberto Fernandez and Economy Minister Martin Guzman indicated their inability to surpass the offer made in July after several rounds of talks with the creditors. The government reached an agreement with the Ad Hoc Group of Argentine Bondholders, the Argentina Creditor Committee, the Exchange Bondholders and other significant Supporting Creditors to support the restructuring plans. Details of the deal are as follows:

According to the new terms, the creditors would receive a recovery value ~55 cents on the dollar, which is lower than the 60 cents demanded by some creditors and higher than ~40 cents first offered by the government on advice of financial advisor Lazard. Had a deal not been reached, Argentina could face an exclusion from capital markets as it had experienced after the 2001 default. “Today [we] have reached an agreement that will allow members of the creditor groups and such other holders to support Argentina’s debt restructuring proposal and grant Argentina significant debt relief,” according to the Ministry as it extended the deadline for the creditors to accept the deal to August 24 from the existing August 4. 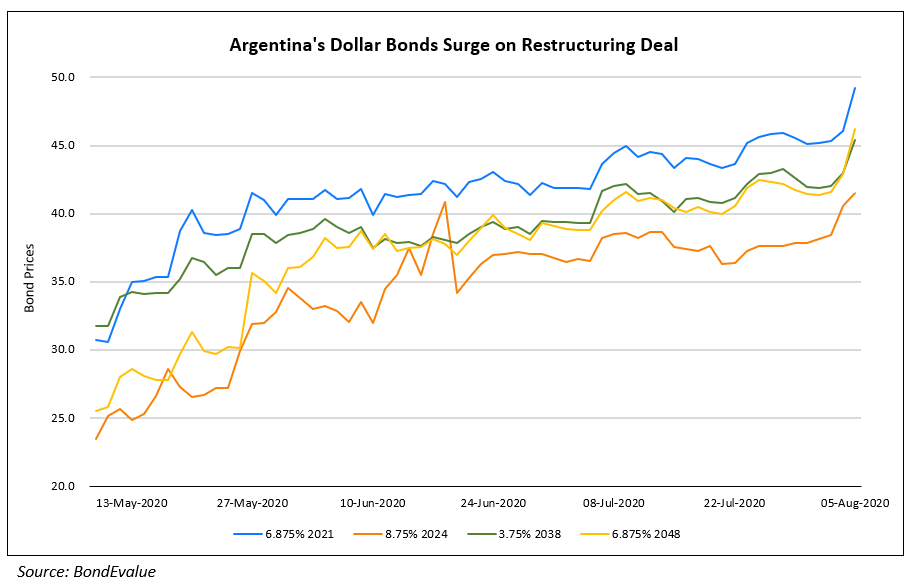 Moody’s downgraded Seven & i Holding Co’s senior unsecured debt rating to A2 from A1 on August 4 while maintaining a negative outlook for the company. The downgrade came as Seven & i announced that its subsidiary 7-Eleven Inc (Baa1) had reached an agreement to acquire the Speedway convenience store of Marathon Petroleum Corporation (Baa2) for $21bn. The acquisition, which is the biggest in the history of Seven & i, could lead to a huge increase in the company’s leverage in case of an all-debt deal. The downgrade rationale was based on customers migrating to online shopping from traditional brick and mortar stores with additional stress due to the pandemic imposed slowdown. The rating agency’s rationale for the negative outlook was based on the challenges faced by Seven & i in maintaining profitability in its core domestic convenience store business over concerns of higher costs due to labor shortages and lower revenues due to discounted franchise fees. In case the acquisition is carried out entirely by debt, the company’s debt would increase by over 70% while the debt/EBITDA would increase to ~4.2x – 4.3x from 2.8x in fiscal 2019. Other rating agencies also put the company on rating watch according to bloombergquint. While the creditors viewed the acquisition with concern over the possibility of increasing leverage of the company, the company’s stocks surged indicating positive investor sentiment over the deal. The stock of the 7-Eleven franchise operator jumped 8.9% on Tuesday after the deal announcement. Seven & i’s bonds traded largely unchanged on the secondary markets.

Indian conglomerate Reliance Industries is getting closer to finalizing its acquisition of Future Retail, according to the Business Standard. Bankers with knowledge of the transaction said that the deal will not only include Future Retail but also other group companies including its logistics business Future Supply Chain Solutions and Future Consumer. “There will be a couple of mergers among Future Group companies and as part of the deal, RIL will go for an all-stock deal,” said a source in the know. Future Retail has been under pressure since the last week of July after missing its debut coupon payment of $13.4mn on its $500mn 5.6% bonds due 2025 on July 22. The retailer has a 30-day grace period to make the coupon payment before it is deemed as a default. The Economic Times reported, “While the deal was expected to close last week, issues over the personal debt at promoter holding companies like Future Corporate Resources have to be resolved as the retail business is the main asset (supporting pledged shares),” said one of the sources briefed on the matter. Future Retail’s bonds have risen from 53.5 on July 23 after it missed the coupon payment to 66.7 cents on the dollar on the secondary markets.

Florida-based Western Global Airlines (WGA), which handles shipments for heavyweights such as UPS and Amazon, launched a debut 5Y bond at initial guidance of 8.75-9.00% on Tuesday. The seven year-old company is one of only a handful of airline companies that have witnessed a boom in its business since the pandemic broke out. As consumers spend more time at home, they tend to shop more online, which has led to a surge in WGA’s volumes. S&P and Fitch forecast a 90% and 70% jump respectively in WGA’s revenues. With the new bond issuance, expected to be rated B+ by Fitch, WGA seems to be capitalizing not just on its strong business environment but also the boom in the credit markets driven by the Federal Reserve’s support. WGA plans to use proceeds from the new bond issue to lend to its newly set up ESOP, which will purchase a stake in the company from its founder. The deal will see founder Jim Neff and other existing shareholders sell as much as 49% of the company to the employee stock ownership plan. The deal will provide tax benefits given the interest payment deductions and contributions made to the ESOP plan, and will discourage workers from unionizing. WGA expects to raise $410mn from the new bond issue.

Belly of the Curve

The belly of the curve is the middle (belly) portion of a yield curve, referring to bonds with maturities around the 5-year mark. While the short-end of the yield curve is primarily driven by the policy rate set by the central bank and the rate at which banks borrow and lend to each other, the belly and the long-end are impacted by more factors. As we go further down the curve, the term premium or the premium required for a longer tenor, expectations of the central bank policy rates in the future and long term inflation expectations start to become more important. These factors focus attention most of the time into the belly of the curve (up to ten years) and generally make this part of the curve more volatile and sensitive to changes.

Apart from trading strategies such as Laddering that is used to spread risk across the curve, traders also use strategies such as Spreads and Butterfly Spreads. A simple Spread trade is where you either Buy the short-end and Sell the long-end or vice versa. A Butterfly Spread is where you either Sell the belly and Buy the short- & long-end or Buy the belly and Sell the short- & long-end. The duration risk taken at each part of the curve is matched such that net duration is close to zero and profit/loss is driven only by changes in the shape of the curve such as flattening or steepening.

On the size of ECB bond purchases – Philip Lane, chief economist at the European Central Bank

“The overall envelope of PEPP (Pandemic Emergency Purchase Programme) purchases is a core determinant of the ECB’s overall monetary stance,” Lane said. “In line with the ECB’s price stability mandate, the inflation outlook plays the central role in determining the appropriate monetary stance.”

On Pimco and Axa doubling down their European asset purchase

“You have the confidence of a monetary anchor that shields sovereign balance sheets,” said Mai. “The belly of the curve (Term of the day, explained below) is the part where we see some value,” he added.

“Investors are hopeful that in ‘x’ number of years, the EU will be looking like a true fiscal, monetary and political union,” said Tentori. “That is very positive for risky assets.” Axa boosted exposure to Italian debt in June, and estimates the 10-year yield could fall to 0.75 per cent.

The PBOC will be “more conservative” in cutting interest rates and banks’ reserve ratios in the second half, but keep supplying short-term funds to banks, according to Ming Ming, head of fixed-income research at Citic Securities Co in Beijing. “Aggregate easing tools will be shelved, while tools directing credit to the real economy will stay.”

On Emerging Markets trajectory towards a Covid fiscal crisis

Eventually, “markets will turn and then look at the debt-to-GDP and say, ‘What are you going to do about this?” said Baurmeister. “‘Now that we’re through the worst of it, how are you going to pay this back?’”

David Hauner, a strategist at Bank of America in London

According to Hauner, a “Turkey scenario,” in which loose monetary policy stokes both growth and high inflation, weighing on the currency, may become a greater risk in other emerging nations, especially if their reserves dwindle and debt levels rise. “Manifold fiscal problems have predated Covid, and the post-Covid world is likely to be fiscally challenging with political demands for more social protection and health care spending,” wrote Hauner. 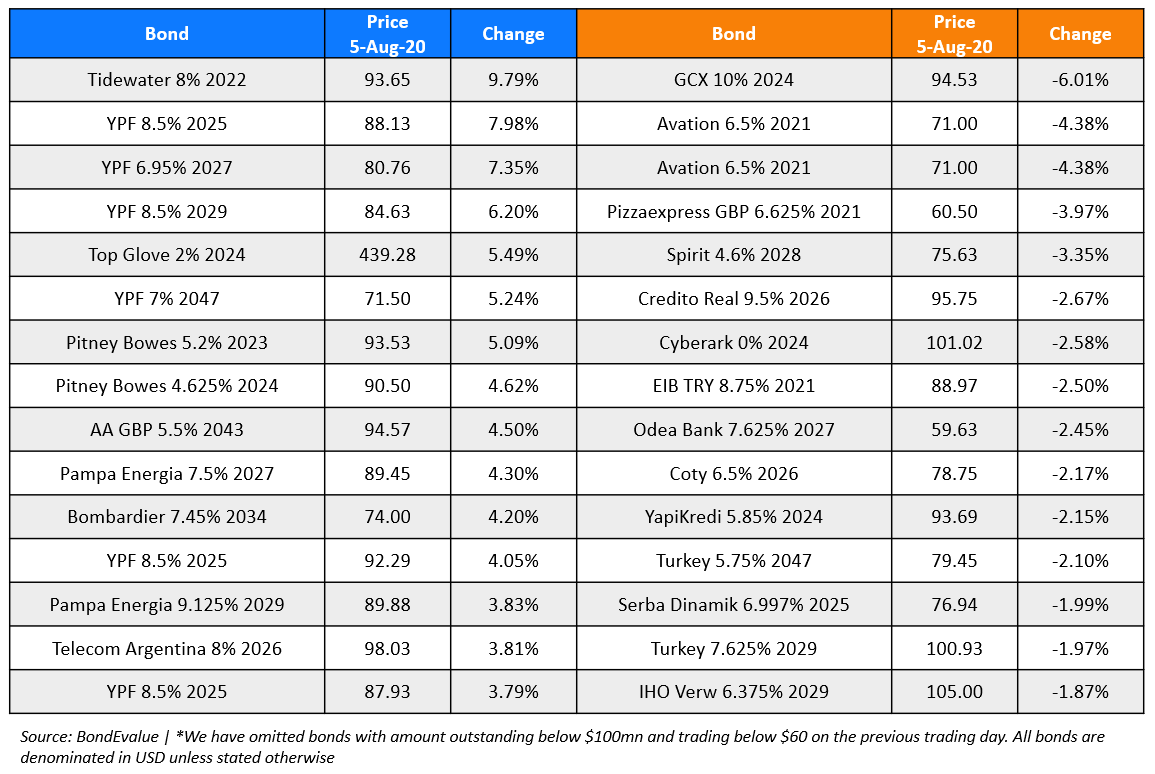