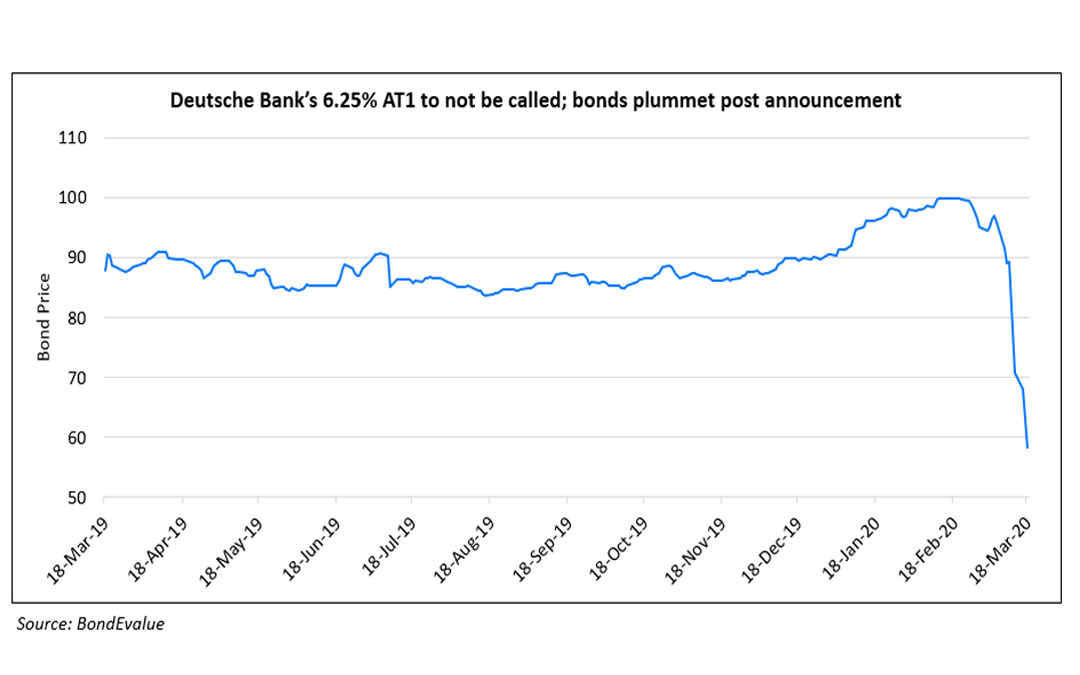 Asian markets struggled on Wednesday despite stimulus spending plans announced by various governments as the threat from a global recession loomed. S&P Global has forecast a global recession this year and their economists estimate world GDP growth in 2020 will be just 1.0%-1.5%, with risks remaining firmly on the downside.

“The initial data from China suggests that its economy was hit far harder than projected, though a tentative stabilization has begun,” said S&P Global’s Chief Economist Paul Gruenwald. “Europe and the U.S. are following a similar path, as increasing restrictions on person-to-person contacts presage a demand collapse that will take activity sharply lower in the second quarter before a recovery begins later in the year.”

Overnight, the US administration discussed a $1 trillion stimulus plan, the UK announced a $420 billion lifeline for corporates and France said it would guarantee 300 billion euros worth of loans. The US stimulus package includes direct cash payments to its citizens, and bailouts for the airline and hotel industries.“We will do whatever it takes to protect our people and businesses from the effects of this global economic emergency brought on by the Coronavirus pandemic,” UK’s Chancellor of the Exchequer Rishi Sunak said.

The virus has so far claimed 7,905 lives and infected over 197,000 people globally and is the biggest concern on investor minds as Japan’s Nikkei 225 is up 0.59%, the Kospi benchmark is 0.8% lower and the Australian benchmark is down 4.1% with the MSCI Asia Pacific ex-Japan index down 0.1%. S&P500 futures are down 3.4% this morning as the mood soured after the overnight rally when the Dow Jones Industrial Average jumped 5.2%, the S&P 500 soared 6% and the Nasdaq Composite climbed 6.23%.

Additional Tier 1 (AT1) bonds of banks tumbled yesterday after investors scrambled to offload. Commonly called CoCo bonds (Contingent Convertible), these bonds will be the first in line after common stock to “absorb losses” if the financial institution that issued it runs into financial distress and a declines in levels of common equity. Notably, Deutsche Bank’s 6.25% USD 1.25 bn AT1 bonds that were trading at par just over a month ago are now trading below 60. Following from last week’s announcement by DB that they would not be calling this AT1 bond.

While cocos were one of the best returning fixed income assets last year, this year’s losses could get worse if large funds that offer investors the ability to withdraw their money have to sell their holdings.

SoftBank and WeWork May Not Work Out On Tender Offer

SoftBank had planned a $3bn tender offer for privately held WeWork shares along with a $1.5bn acceleration of equity it has already committed and $5bn in syndicated debt. They may be backing out on the tender offer that closes on April 1 citing potential probes from the Securities and Exchange Commission and the Justice Department as one of the reasons.The bailout valued the startup at $8bn, which is much lower than the $47bn that SoftBank valued it as of January 2019. WeWork may struggle more as global quarantines rock the co-working market. SoftBank’s 6% Perp bond yield has moved higher from 6.50% to 13.25% since March 6. WeWork’s 7.875% 2025 bond yield has moved higher from 13.5% to 19.25% in the same period. 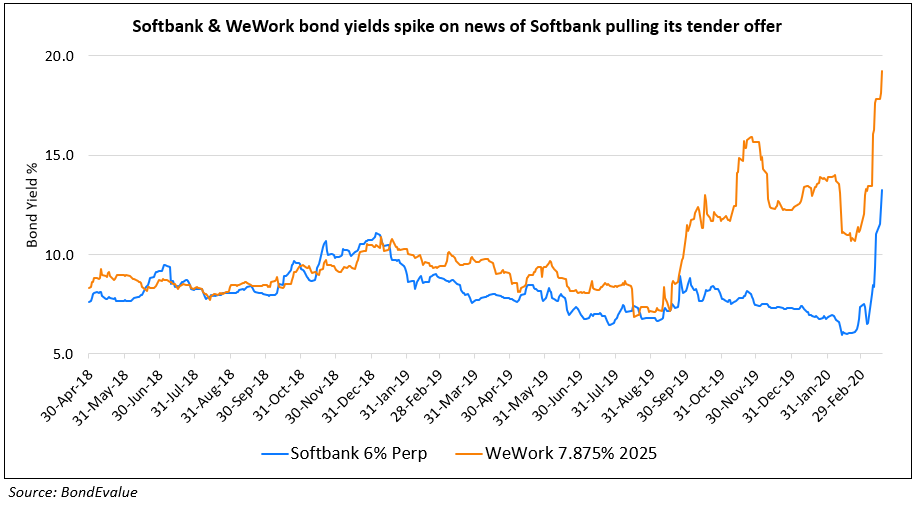 Fitch Revises Outlook on Thailand to Stable; Affirms at ‘BBB+’

The Outlook revision reflects the evolving impact of the global COVID-19 outbreak on Thailand’s economy through its tourism sector as well as lingering uncertainty in Thailand’s political environment following the country’s transition to civilian rule. The ‘BBB+’ rating reflects Thailand’s sound external and public finances, which serve as cushions against economic and financial shocks. These strengths are balanced by weaker structural features relative to peers, including lower World Bank governance scores and, to a lesser extent, lower income per capita.

Fitch forecasts that Thailand’s economic growth will weaken to 1.0% in 2020, from 2.4% in 2019, on account of the COVID-19 pandemic. This would mark a second consecutive year of slowing growth, and the lowest pace of expansion since 2014. A combination of factors led to the economic slowdown last year to 2.4%, from 4.2% in 2018, including weaker external demand amid US-China trade tensions, a sharp appreciation of the baht, delayed approval of the budget for the fiscal year ending-September 2020 (FY20), and drought conditions in the agricultural sector.

The impact of Covid-19 has hit the airline industry, where many airlines now struggle to stay afloat as more travel restrictions are rolled out across the world. Moody’s has already downgraded airlines such as Lufthansa, easyJet and Southwest Airline, and many others at risk of getting cut to junk. Moody’s foresees the airline industry needing support from regulators. governments and labour representatives to remain operational. 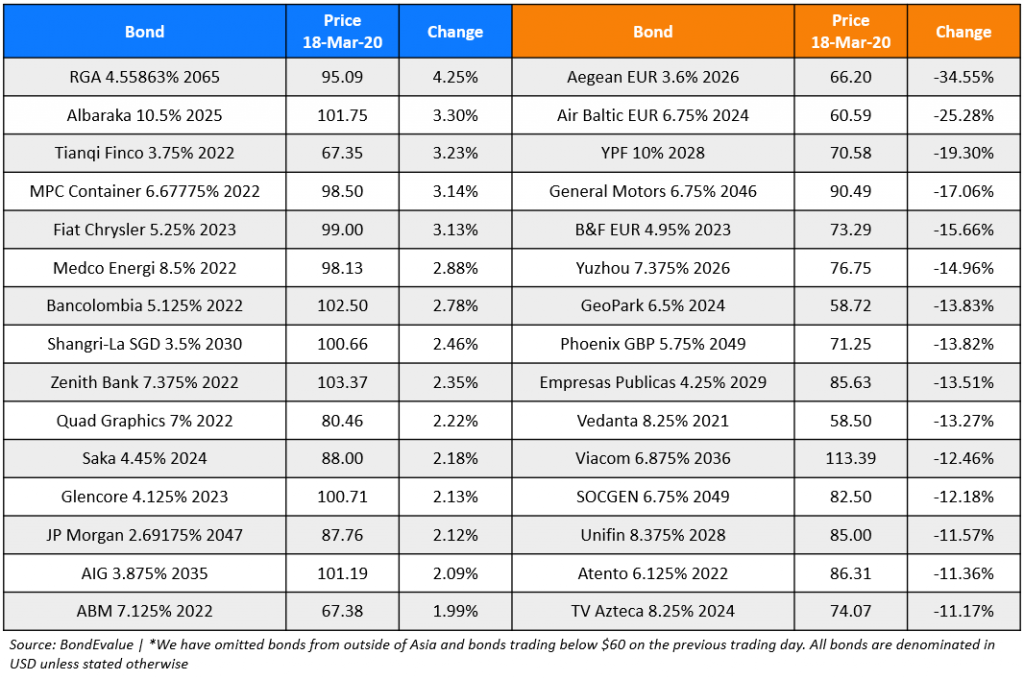 The sudden economic stop caused by COVID-19 containment measures will lead to a global recession this year. A cash flow slump and much tighter financing conditions as well as the simultaneous oil price shock will hurt creditworthiness. These factors will likely result in a surge in defaults, with a default rate on nonfinancial corporates in the U.S that may rise above 10% and into the high single digits in Europe over the next 12 months.Collapsing demand threatens a cash flow slump. Central banks will likely prevent systemic failures in the financial system by cutting rates to zero or lower, injecting liquidity into the system, and implementing measures similar to those after the global financial crisis to lessen risk. Nevertheless, the collapse in many areas of global demand will stifle cash flow for many industries, placing intense pressure on working capital, cash balances, and the ability to sustain operations, with many (especially smaller) companies requiring temporary loan funding with government backing. Efforts to cut cash burn through reducing capital investment, dividends, M&A, and staffing are likely to follow, helping intensify the economic consequences of COVID-19. Volatile market conditions will hamper funding, and in some cases, industries could struggle to avoid insolvency absent government-led fiscal support.

Unsurprisingly, the industries most affected by cuts in discretionary spending and containment measures are airlines, transportation, leisure and gaming, hotels and restaurants, and retail. Disruption to cross-border supply chains is another critical pressure point weighing on the creditworthiness of industrial sectors such as auto manufacturing and capital goods. Somewhat more insulated from the epidemic and market dislocation are industries such as healthcare and telecommunications.

Oil adds another default dimension.  The drop in oil prices–prompted by a breakdown of supply agreements and an anticipated slump in demand–has created a second source of credit and default risk. On March 9, we revised our oil and gas price assumptions down, with our West Texas Intermediate oil price assumption lowered 36% to $35 per barrel for 2020. We are reviewing all investment- and speculative-grade exploration and production as well as oilfield-services companies. For the speculative-grade segment, in particular, issuers without hedges that face upcoming maturities and are somewhat squeezed on borrowing-base revolving credit facilities will most likely face multiple-notch downgrades.

CDS on European investment grade companies fell from an eight year high a day earlier prompting three borrowers to open sales of new top rated bonds. These covered bonds are the safest of debt securities but three deals is unlikely to signal a complete recovery. This recovery does stand at odds with the ongoing slump in Asia where US dollar bond spreads hit the highest in over eight years and new debt sales remain closed. Spreads on Asia dollar bonds were about 5-20 basis points wider on Tuesday morning with wide bid-offer spreads.

As the Fed tries to blunt the economic fallout from the coronavirus pandemic, it moved to ensure the flow of credit to US companies, banks and local governments by reopening the CP Funding Facility as many in the markets had hoped. This allows the Fed to be the lender of last resort to two dozen Wall Street primary dealers by letting them pledge municipal bonds, corporate debt and equity securities as collateral for 90-day Fed loans. As debates about other facilities carry on, US elected officials were contemplating hundreds of billions of dollars of relief in helicopter money.

Extremely volatile conditions across the US fixed income market because of the coronavirus pandemic have led to a highly unusual pricing dislocation in Vanguard’s $55bn total bond market exchange traded fund, one of the world’s largest ETFs. The ETF, known by its ticker BND, saw the gap between its closing price and the net asset value of the fund surge to a 6.2 per cent discount on March 12. Most ETFs usually trade throughout the day in a very narrow band around the NAV of the fund. Since its launch 13 years ago, BND’s closing premium has averaged 0.17 per cent. Fixed income ETFs generally trade at a slight premium to NAV but many have switched to a discount this month over concerns that companies will struggle to service debt payments because of disruption caused by the coronavirus outbreak.