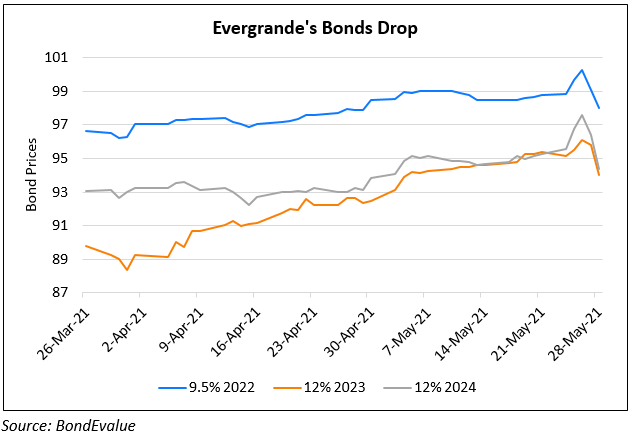 China Evergrande’s bonds fell on Caixin Media’s WeNews reporting that the China Banking and Insurance Regulatory Commission (CBIRC) is examining more than CNY 100bn ($15.7bn) of transactions between the developer and Shengjing Bank Co. WeNews notes that Shengjing Bank holds a large amount of Evergrande’s bonds while Evergrande is the bank’s largest shareholder. Evergrande increased its stake in the bank in 2019 after authorities requested for the recapitalization of the lender, notes Bloomberg. WeNews states that Evergrande increased its stake indirectly by using proceeds from its bonds, post which the lender bought bonds of the property developer. This came at a time when rules introduced in China in 2018 required investors to use their own funds to invest in banks, rather than borrowed funds. Bloomberg reports that in June 2019, Evergrande agreed to increase its stake in Shengjing to 36.4% from 17.3% by purchasing new shares placed by the bank. The deal was completed in November 2019, when Evergrande said the cash was from internal resources, according to a filing.