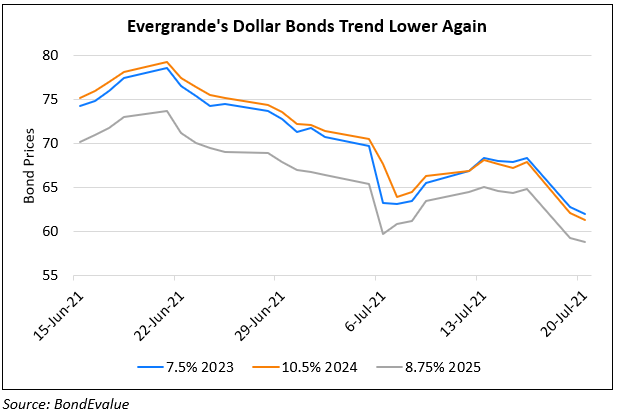 China Evergrande’s bonds sank again on Monday after news that a court in Jiangsu province ordered the freezing of a bank account held by its subsidiary Hengda Real Estate and its unit at China Guangfa Bank. Evergrande’s 8.75% 2025s fell the most by 8.7% and several of its 2023s and 2024s fell over 8%. Evergrande hit back saying it will take legal action against China Guangfa Bank after the lender froze a CNY 132mn ($20mn) loan to Evergrande’s onshore unit. Evergrande said the loan was not due until March 27, 2022. Nomura said, “While the reasons of the early repayment are unknown, we are cautious as this court order could lead to a rush of onshore banks and trust companies freezing assets against their loans…While we do not expect an imminent default due to a lack of public bond maturities, it will also be hard for us to track the repayment of onshore bank/trust loans”. Nomura adds that Evergrande’s scheduled board meeting on July 27 for a special dividend plan is a credit negative irrespective of whether it is in cash or stock.