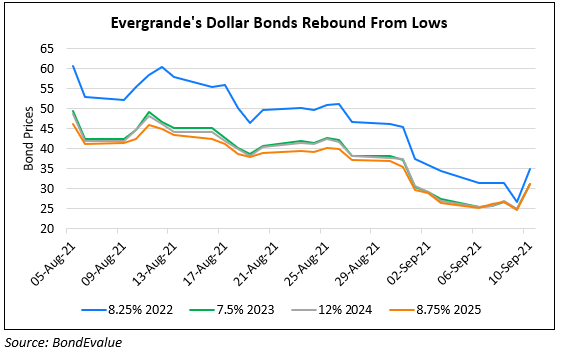 China Evergrande’s dollar bonds jumped ~30%, its largest rise since October 2020, after the company came out with a statement saying that they promise to redeem all wealth management products (WMPs) as soon as possible. Bloomberg also reports that some investors bet the government will prevent the developer’s liquidity crisis from ending in a worst-case scenario. At the Evergrande Wealth Conference on September 10, the Chairman, Hui Ka Yan said that at while the developer has encountered unprecedented difficulties, the fundamentals of Evergrande have not changed. He said that the strong combat effectiveness of the staff, the land bank with sufficient scale and reasonable layout, and the ability to build high-quality communities have not changed. He added, “I can have nothing, but the investors of Evergrande Wealth can’t have nothing!”

As per Reuters, investigative agency REDD reported that Evergrande had outlined an interim repayment plan for retail investors on Thursday. The plan suggested it would repay matured WMPs of less than RMB 100,000 ($1,550), but those holding more than that will have their payments extended by two to four years and amortized, with the first payment to be made next year, while payments to institutional investors will be suspended to an undecided date.

Nomura credit analyst Iris Chen now believes a base case government-supervised deal that ensures Evergrande delivers homes and pays suppliers, and where dollar debt investors would get 25% of their money back i.e., a 75% haircut (Term of the Day, explained below). For investors in its unit Scenery Journey, she expects only a 5% recovery rate for investors.

Separately, Evergrande’s  customers protested in Guangzhou demanding that the developer should restart stalled construction work, urging the local government to intervene. The news comes after  Evergrande last month said that it suspended project work due to payables which were overdue and that it was negotiating with suppliers and contractors to resume construction.