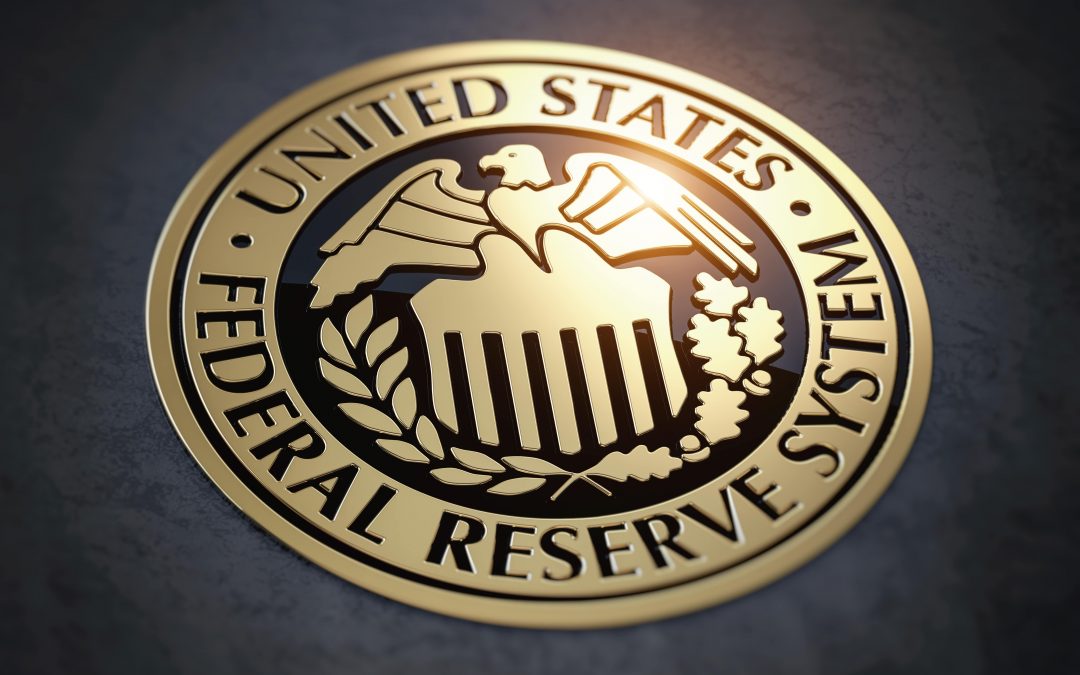 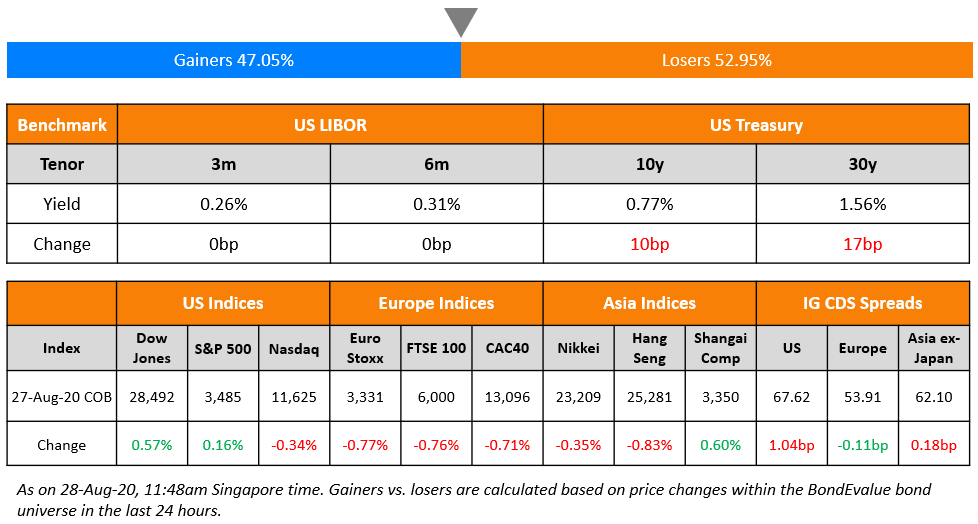 Markets were supported overnight by constructive comments from Fed Chair Jerome Powell, who spoke at the Jackson Hole economic policy symposium. He announced a major dovish paradigm shift where the central bank will abandon its old policy of targeting 2% inflation and will instead view 2% as an average target over time. This would allow for higher increases in some periods to help boost employment, spending and investment. The comments boosted US stocks but caused a steepening of the Treasury yield curve on the prospect of higher long term inflation. 10 year and 30 year US treasury yields climbed 4bp and 9bp respectively. Initial claims for unemployment numbers came out above a million and US lawmakers are still debating on the new stimulus bill. European shares and CDS spreads were lower. US IG CDS spreads rose a tad. Asian markets are opening on a positive note this morning. 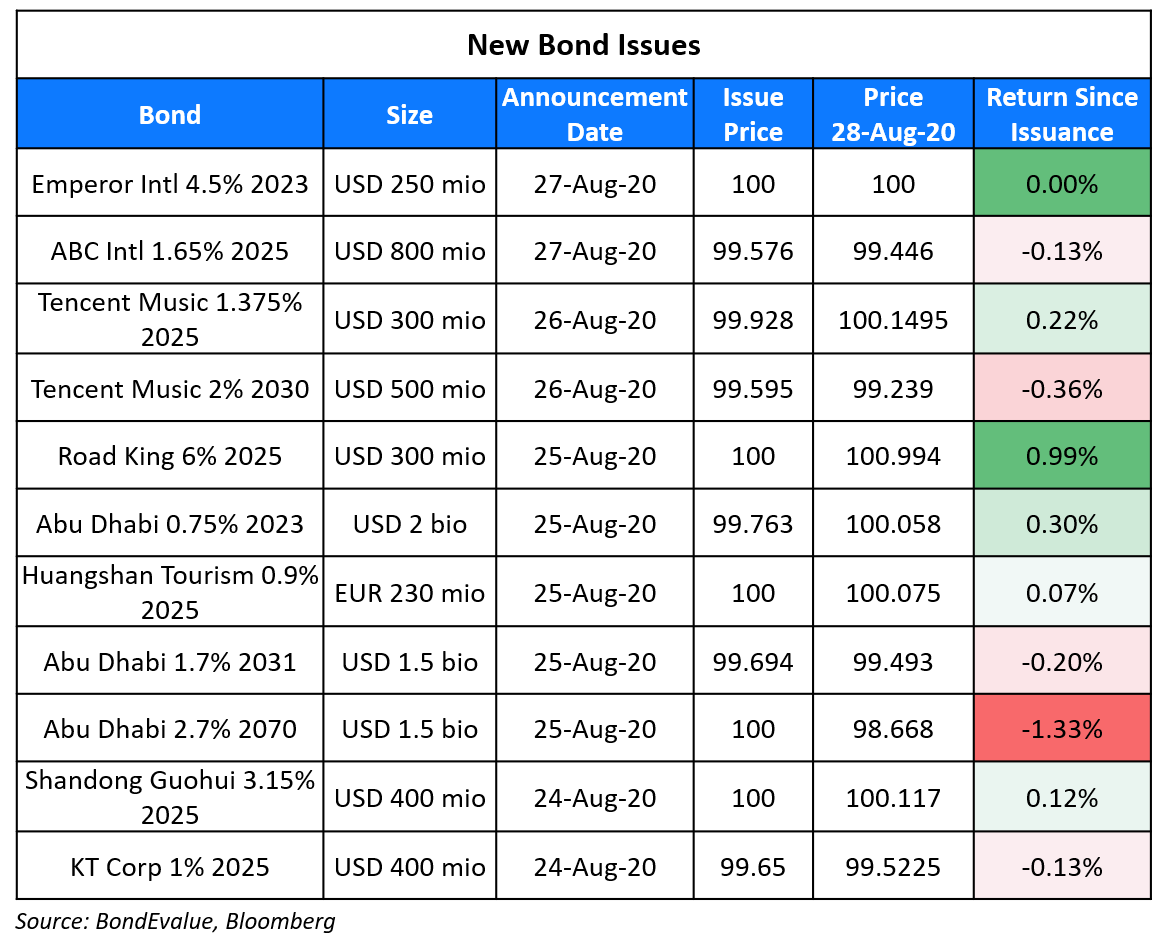 Hong Kong real estate company Emperor International raised $106.8mn via 3Y bonds to yield 4.5%, 30bp inside initial guidance of 4.8% area, together with an exchange offer. The holders of its $143.2mn or 71.67% in aggregate principal amount of the $200mn 4% bonds maturing in September 2021 have accepted the exchange offer, which will be on a par-to-par basis.

Fed Chair Jerome Powell revealed the Fed’s new approach towards monetary policy in his much-awaited speech at Jackson Hole, delivered as a webcast this year. Highlights of the new approach are as follows:

Powell said that the policy, which would be reviewed every 5 years, was based on three pillars: Fed Listen events (engagement with community groups), research conference and committee discussions. As per the Chair, the review was motivated by the following four developments:

Quotes from Powell are included in the Talking Heads section below.

Finland’s flag carrier Finnair raised €200mn via hybrid bonds, the first issuance by a European airline since the pandemic broke out, on Thursday. The hybrids were priced to offer a massive coupon of 10.25% to compensate investors for the lower rank of the bonds compared to Finnair’s other debt. Investors’ concerns over the airline industry seem to have clouded the government’s 55.8% ownership of the airline. The issuance met with a rather tepid response with orders worth €260mn, just 1.3x issue size in an environment where it is not uncommon to see oversubscriptions of 3-4x. “The risks aren’t disappearing just because it’s state owned,” said Luke Hickmore, investment manager at Aberdeen Asset Management, adding that the bondholders of a national flag-carrier are at risk of the government’s decisions over the airline’s future. Proceeds from the issue will be used to repay an older hybrid, which would see its coupon jump from 7.875% to about 13% if not called in October. The new hybrids will see its coupon reset to the 5Y EUR swap rate plus a spread of 15.25% if not called in June 2023.

Bondholders of distressed cruise companies Carnival and Royal Caribbean seem to have shrugged off the recent superdowngrades (Term of the day, explained below) by Moody’s, based on how their recently issued bonds are trading on the secondary markets. 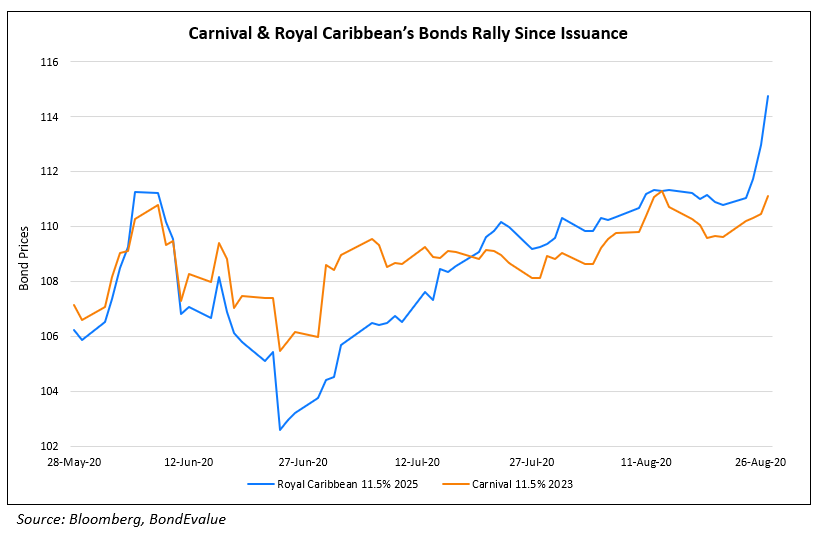 Carnival’s 11.5% bonds due 2023 have delivered an impressive price return of 11.9% since issuance in early April, while Royal Caribbean’s 11.5% bonds due 2025 have delivered an even greater price return of 16.8% since issuance in mid May. This agrees with the yield-chasing phenomenon that we are witnessing in the high yield bond market. However, it is worth noting that the two bonds are first lien obligations ranking senior to other debt of the company. Both, Carnival’s 2023s and Royal Caribbean’s 2025s are rated Ba2, two notches higher than the long term issuer rating of B1. The higher ranked bonds are now yielding 6.5% and 7% for Carnival and Royal Caribbean respectively, tighter than its older lower ranked bonds with a similar maturity. Moody’s base case is for U.S. cruising to resume in the first half of 2021. If that doesn’t happen, or if the companies need to take on even more debt to stay afloat, it would consider additional downgrades.

Sharia-compliant real estate investment trust Emirates REIT announced an Net Asset Value (NAV) of $215mn in Q1 ending June 2020, down $15mn QoQ. The drop is largely attributed to the stress on the real estate market due to the ongoing pandemic. The blended portfolio occupancy was down to 76% from 82% in the last quarter. The Loan to Value (LTV) increased to 48% from 44% QoQ as the company was subject to lower valuations. The cash flows are expected to be lower by 4-6% YoY. The company is actively trying to offset the losses by engaging with the tenants by extending a new leasing strategy to cater to the tenants’ needs. Anthony Taylor, Head of Real Estate at Emirates NBD Asset Management, said “Rental income from our portfolio is down on a year-on-year basis, mainly due to the relief measures that we have introduced for struggling tenants, along with lower occupancy in certain office and residential buildings. We have, however, been successful in managing down costs, with total expenses reduced by 20% compared to 30th June 2019, due to lower finance costs resulting from refinancing, reduced management fees, and active cost saving initiatives rolled out with service providers across our properties.”

Superdowngrades are an informal term given to rating downgrades of three or more notches. Most recently, Carnival Corp and Royal Caribbean witnessed a superdowngrade by Moody’s with both cruise operators’ rating slashed from Ba1 to B1, a three notch downgrade.

“The persistent undershoot of inflation from our 2 percent longer-run objective is a cause for concern. Many find it counterintuitive that the Fed would want to push up inflation. After all, low and stable inflation is essential for a well-functioning economy.”

“However, inflation that is persistently too low can pose serious risks to the economy.”

“But if inflation expectations fall below our 2 percent objective, interest rates would decline in tandem. In turn, we would have less scope to cut interest rates to boost employment during an economic downturn, further diminishing our capacity to stabilize the economy through cutting interest rates.”

“We continue to believe that specifying a numerical goal for employment is unwise, because the maximum level of employment is not directly measurable and changes over time for reasons unrelated to monetary policy.” and added “we have not changed our view that a longer-run inflation rate of 2 percent is most consistent with our mandate to promote both maximum employment and price stability.” and “Finally, we continue to believe that monetary policy must be forward looking,”.

“In seeking to achieve inflation that averages 2 percent over time, we are not tying ourselves to a particular mathematical formula that defines the average.”

“Overall, our new Statement on Longer-Run Goals and Monetary Policy Strategy conveys our continued strong commitment to achieving our goals, given the difficult challenges presented by the proximity of interest rates to the effective lower bound. In conducting monetary policy, we will remain highly focused on fostering as strong a labor market as possible for the benefit of all Americans. And we will steadfastly seek to achieve a 2 percent inflation rate over time.”

“There is a risk that overall inflation will overshoot [the central bank’s] target and they won’t have the political will to pull in the reins before it becomes a problem.”

“The takeaway for the real economy is that wages will be allowed to run higher which could benefit low-income households most affected by Covid-19,” said Richardson.

“China has been cautious in its liquidity injections, so while banks can still secure funding, the borrowing costs aren’t cheap,” said Liu. “Some traders even worry the central bank may tighten monetary policy.”

“The recent plunge in rupiah hedging costs will be crucial in attracting foreign flows back into Indonesian bonds,” said Tan. “The ability to cheaply hedge out direct rupiah exposure will entice global investors who want exposure to Indonesia’s high and falling yields, but at the same time apprehensive about the rupiah’s recent depreciation.” 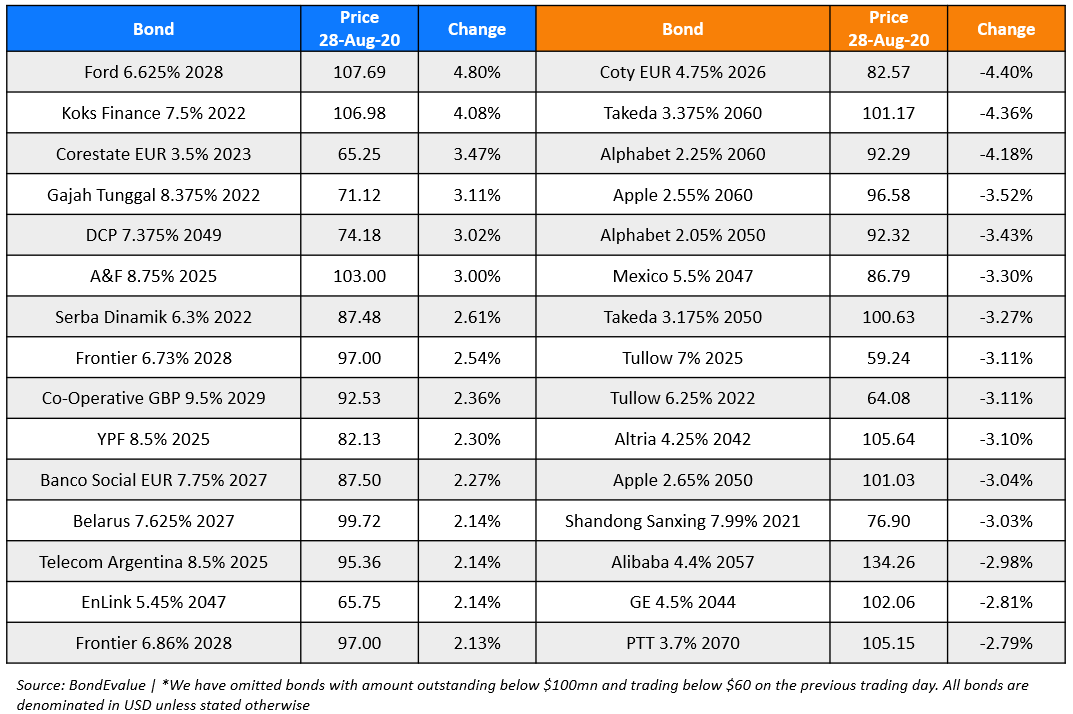