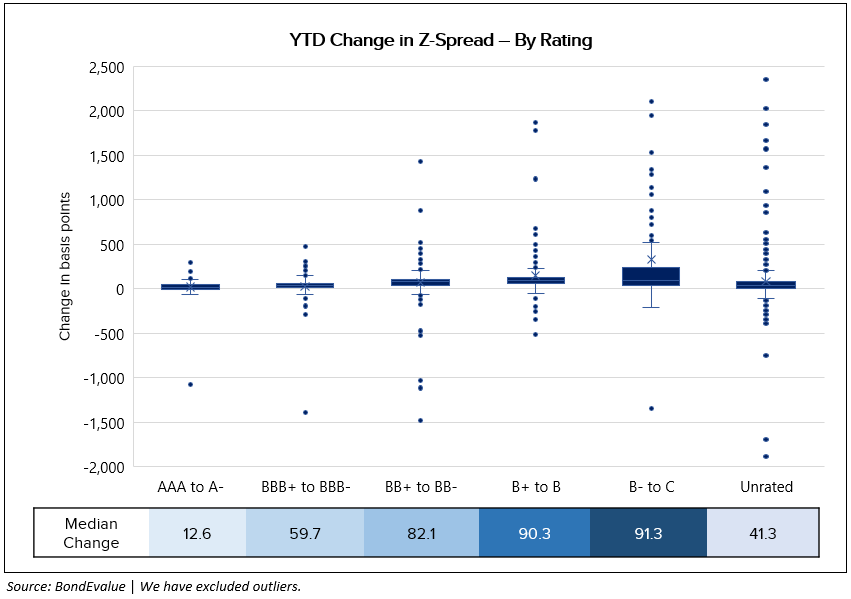 The Federal Reserve announced an emergency rate cut of 50 basis points on 3rd March 2020 amid growing concerns over the impact of the Covid-19 virus on the US economy. This sparked déjà vu among bond investors as the Fed had previously made an emergency cut back in October 2008 after Lehman Brothers collapsed. In the graph below, we have plotted the Bloomberg Barclays Emerging Market (EM) USD Aggregate High Yield (HY) Index vs. the upper bound of the Fed Funds rate to understand how EM HY bonds performed during the crisis. 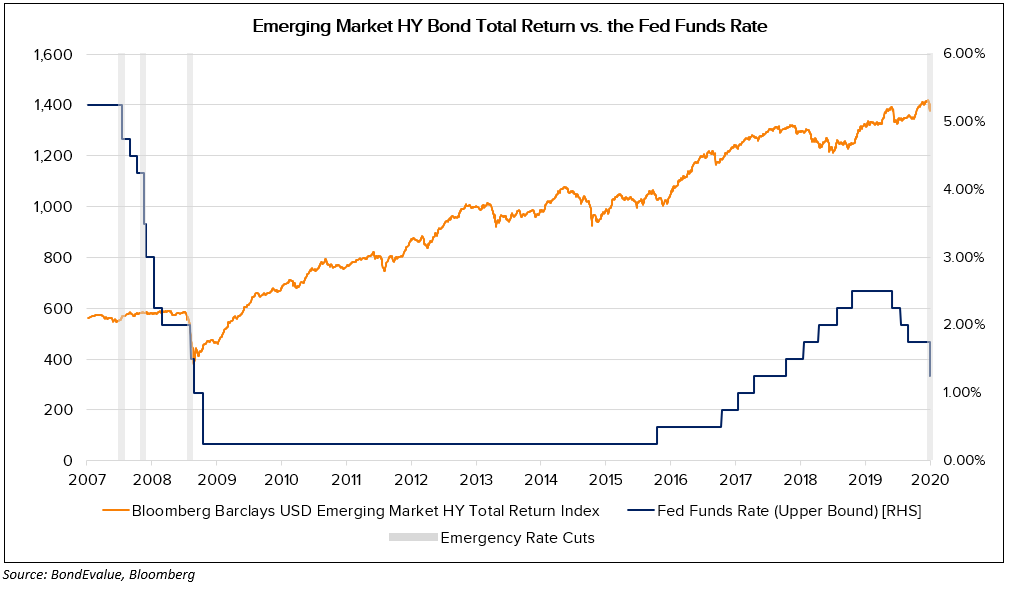 To gauge the impact of the rate cut on bond prices, we compared prices between 28th February and 6th March 2020. The 10-year Treasury yield fell by 39 basis points during this period. Other government bond yields also fell with 77% of all sovereign bonds in our universe moving up in price. Bond yields move inversely to bond prices.  Of the total bond universe, 85.6% witnessed a widening in credit spreads, as measured by the zero-volatility or z-spread. A positive change or widening in z-spread indicates a deterioration in credit quality and thus a rise in bond yields, and vice versa.

YTD Performance of Bonds in the BEV Universe

The 10-year US Treasury yield has dropped by 114 basis points since the start of 2020, indicating strong demand for haven assets. To gauge the year-to-date change in credit quality, we have compared credit spreads of bonds in our universe.

In the box & whisker plot above, we can see that median spreads widened as you go down the rating spectrum with lower rated bonds seeing a greater widening in spreads. 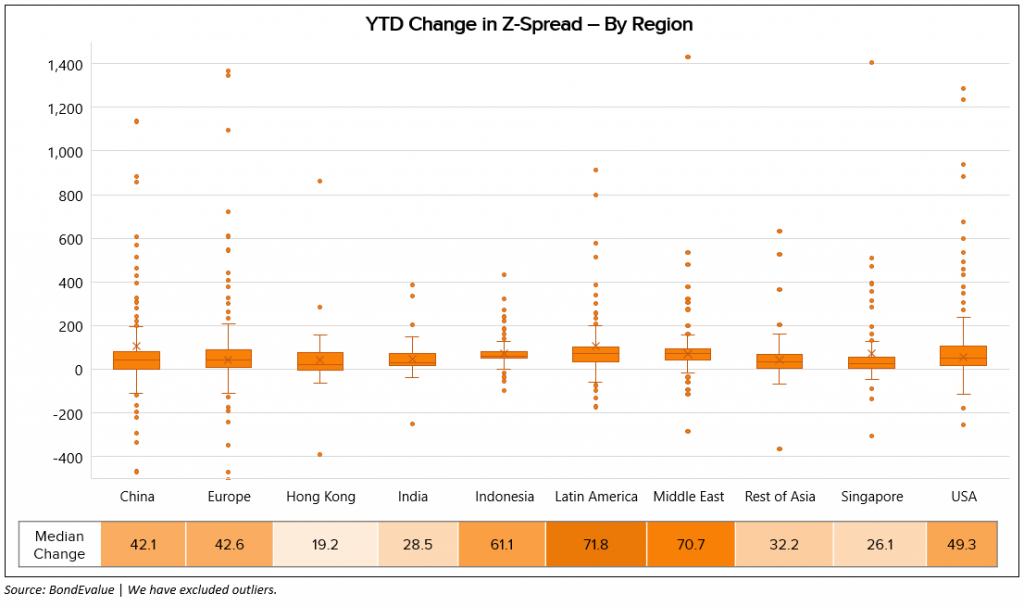 In terms of regions, bonds from Latin America, Middle East and Indonesia witnessed the greatest widening in median credit spreads. Almost all regions have long tails (dots above and below the boxes), which indicates that some bonds witnessed a much greater/lesser widening in spreads as compared to the mid 50% of the bonds from that region. 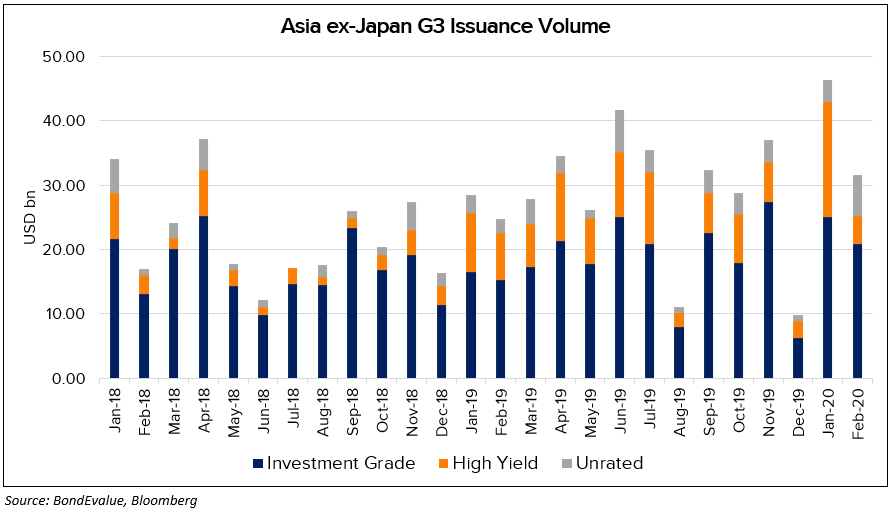 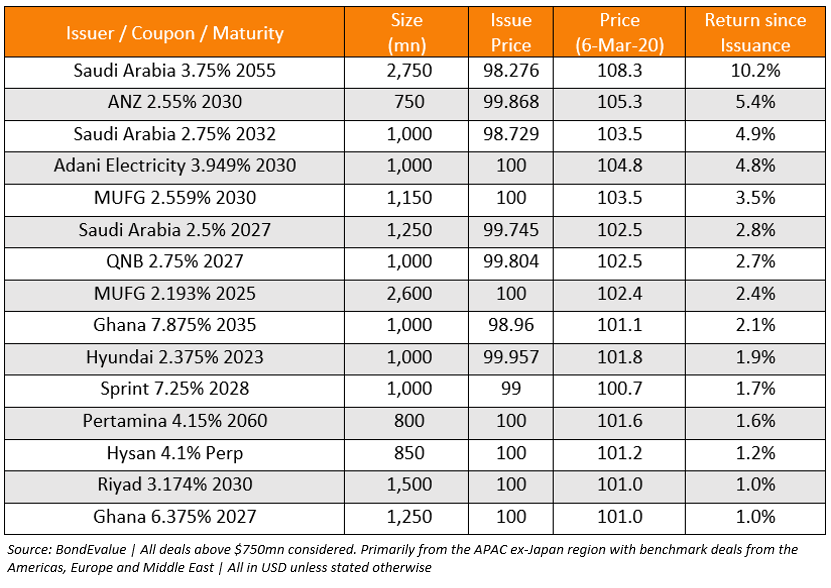 Saudi Arabia’s jumbo $5 billion three-tranche issuance met with strong investor demand with orders of $20 billion. The 7, 12 and 35-year bonds rallied on the secondary markets returning 2.8%, 4.9% and 10.2% respectively to investors that were allotted the bond at primary issuance.

Investor demand remained strong for high yield sovereigns as well as Ghana, rated B by S&P, received orders worth $14 billion for its three-tranche bond. The west African nation raised $3 billion via sinkable bonds that amortize over an average maturity of 6, 14 and 40-years. The $750 million 40-year tranche is the longest ever bond issued by a sub-Saharan African nation. The bond witnessed a 52.5 basis points tightening from initial guidance of 9.4% to final pricing at 8.875%, with a coupon of 8.75% issued at a discount to par. 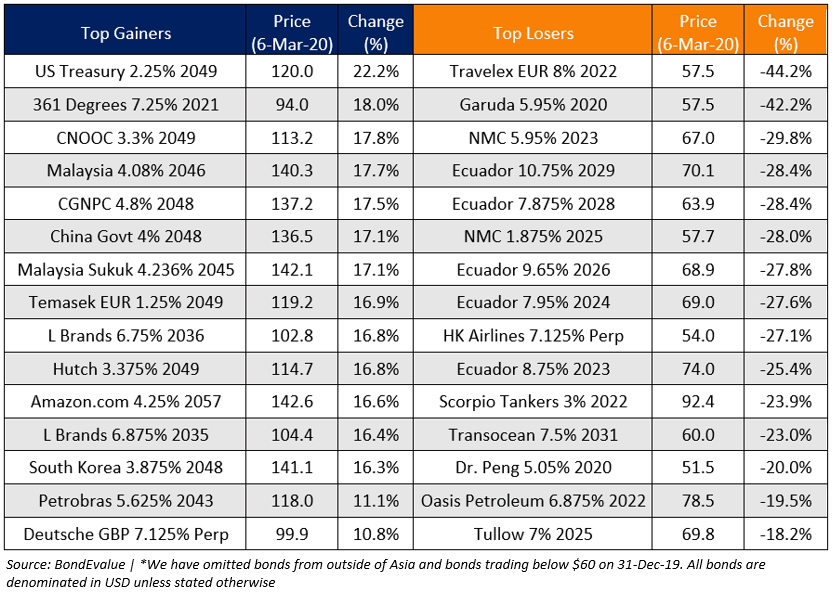 Investor flight to safety is evident from the list of top gainers for the month of February. Sovereign and government linked bonds led the charts along with higher rated corporates like Amazon and CK Hutchison. The sharp fall in benchmark yields increases the demand for higher yielding sovereign bonds in the secondary market, which drives their prices higher and yields lower.

Among the top losers were bonds from corporates that are gravely impacted by the Covid-19 virus. Worst affected was travel-related foreign exchange company Travelex. The London based company’s bonds plunged over 44% year-to-date as it was downgraded by S&P and Moody’s to CCC (2 notch downgrade) and Caa1 (one notch downgrade) respectively on the back of the virus impact and corporate governance issues. Travelex is owned by Finablr, which is controlled BR Shetty, who is also the founder of Gulf hospital operator NMC Healthcare, which is currently under scrutiny for an accounting scandal.

Airline company bonds took a beating too, as can be seen from the graph below. Indonesian state-owned carrier Garuda Airlines’ 5.95% sukuk due in June 2020 dropped 40 points from ~98 on 25th February to 57 on 6th March 2020. The Indonesian minister for state-owned enterprises Erick Thohir said, “Garuda at this point of time is under extraordinary pressure as [some of its] debt are maturing. And we will be sure to restructure [the debts so as to] find a way out, and so that [Garuda] can be healthy again”. 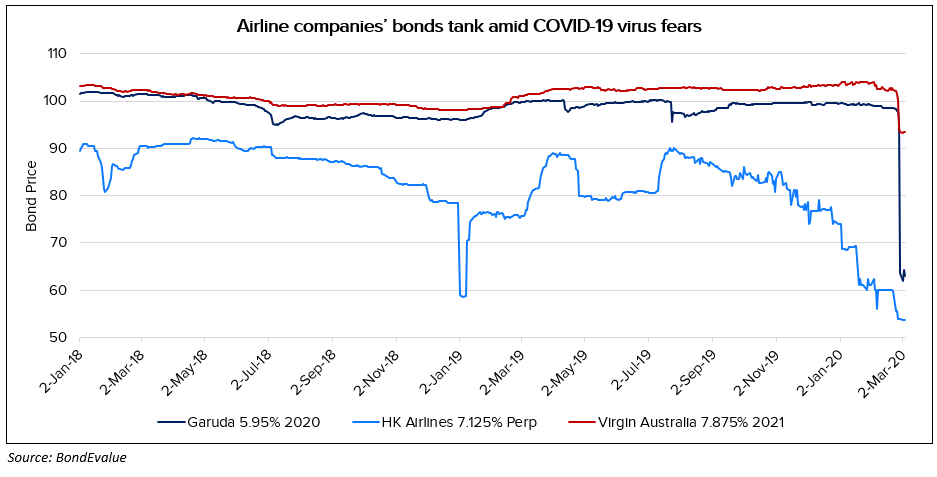 Other tourism related sectors like car rental companies also felt the pressure of the virus. Here’s how their bonds performed since the start of 2020.

Other sectors that are showing signs of pressure from the virus are oil exploration, transportation and logistics, metals and mining, automobiles, hotels and casinos. Thus, bond investors must be cognizant of the risks to their bond holdings in these sectors.

Other Bonds in the News

Yes Bank’s 3.75% bonds due 2023 jumped 12 points from 82 on 3rd March to 94 on 6th March 2020 on announcement of State Bank of India acquiring a stake in the country’s fourth-largest lender. Yes Bank has been struggling to raise capital to shore up its balance sheet since last year, which has led the central bank to take control of the bank.

Middle-East hospital operator NMC Healthcare’s 5.95% sukuk due 2023 dropped ~30 points from 97 on 14th February to 67 on 6th February on revelation of an accounting scandal at the London listed company. The company has requested for a debt standstill as it faces a cash crunch.

Unicredit’s 3.875% Perp issued on 19th February 2020 at 100 dropped to 88.7 on 6th March amid concerns over the impact of the virus and mounting debt. Italy announced a lockdown for over a quarter of its population as it locked down the northern part of the country, which accounts for majority of the country’s economic output.