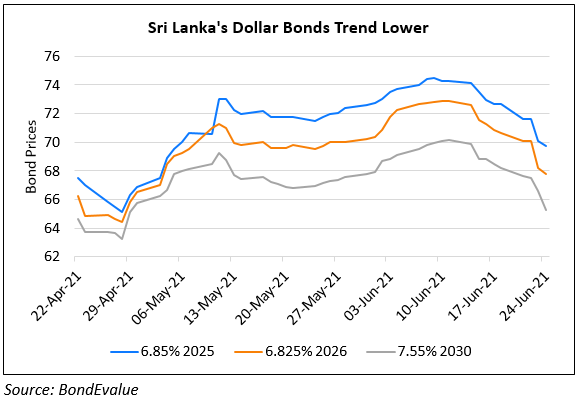 Fitch has warned that Sri Lankan banks are at increased risk following the end of the suspension on banks’ investments in international sovereign bonds (ISBs) issued by the Sri Lanka sovereign. In December 2020, the central bank (CBSL) indefinitely halted investments in ISBs by banks due to concerns on the domestic FX market due to dollar outflows for these purchases that led to a fall in dollar reserves. On June 16, 2021, CBSL revoked the previous indefinite suspension on investments in ISBs by banks with a caveat – banks can hereon purchase ISBs in the secondary market, provided the investments are funded by fresh overseas borrowings. The new rule requires that fresh offshore borrowings have to be invested in both ISBs and Sri Lanka Development Bonds (SLDBs) in equal proportion, helping contribute to increased investments in SLDBs by banks who are typically the main investors but where holdings haven fallen of late. SLDBs, similar to ISBs are dollar-denominated but are not sold in the USA or to persons residing in the USA, yield lower than ISBs and thus are not as widely held.

Fitch believes that banks will be constrained by the sovereign’s weak CCC rating and debt burden over the medium-term, making it difficult to raise foreign funds to buy ISBs and SLDBs. Fitch-rated Sri Lankan banks have ~33% of their combined assets exposed to the central government by the end-2020 and are therefore already significantly exposed to the sovereign. These banks had 6.4% of their assets at end-2020 exposed to ISBs and SLDBs and Fitch expects them to add only a limited amount of ISBs and SLDBs due to lower appetite for these securities and funding challenges.