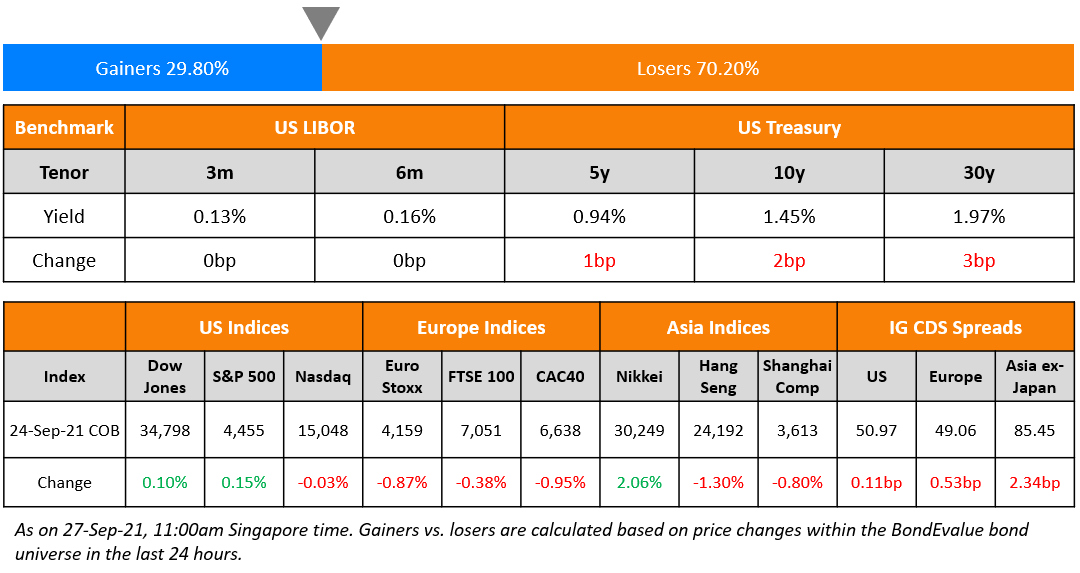 The German IFO Business expectations and business climate marginally missed expectations at 98.8 and 100.4. The Italian Consumer Confidence Index rose to 119.6 for September vs. 116.2 in August and beat expectations of 115.8.

Just three days to go! Sign up for the upcoming 8-module course starting on Monday, September 27, designed & curated to help develop a comprehensive understanding of bonds along with practical and actionable insights on how to trade and advise on bonds better. The course will be conducted via Zoom by senior debt capital market bankers on 27-30 September and 4-7 October (Monday-Thursday) at 5pm Singapore / 1pm Dubai / 10am London. 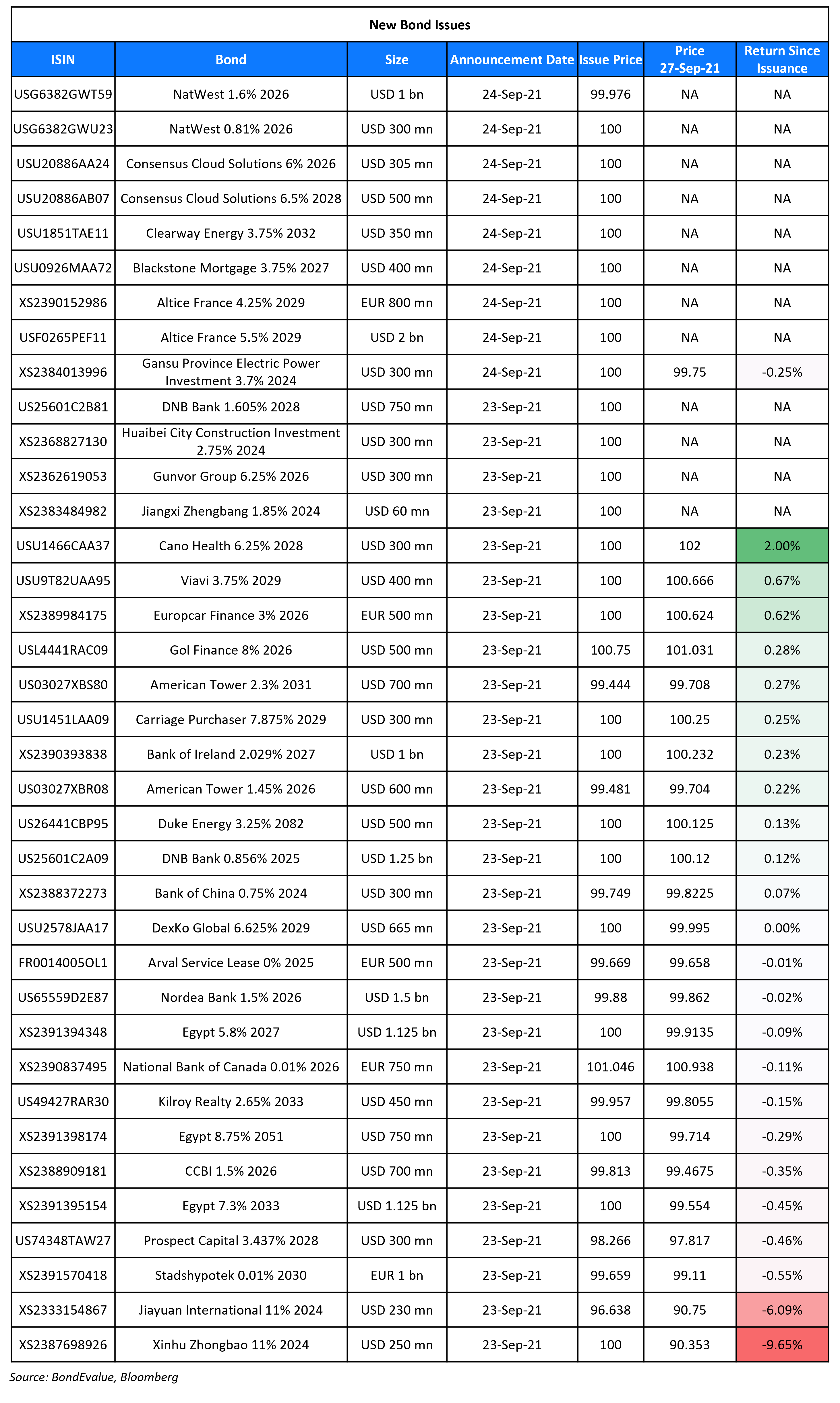 NatWest Markets raised $1.3bn via a two-tranche deal. It raised $1bn via a 5Y bond at a yield of 1.605%, 20bp inside initial guidance of T+85bp. It also raised $300mn via a 5Y FRN bond at a yield of 0.81% or SOFR+76bp vs initial guidance of SOFR equivalent. The bonds have expected ratings of A2/A-/A+. Proceeds will be used for general corporate purposes.

Gansu Province Electric Power Investment raised $300mn via a 3Y bond at a yield of 3.7%, 40bp inside initial guidance of 4.1% area. The bonds have expected ratings of Baa3/BBB– (Moody’s/Fitch), in line with issuer rating, and received orders over $1bn, 3.3x issue size. The issuer invests in and controls a number of specialized investment and financing companies in various industries, with a primary focus on the power generation business. Proceeds will be used for onshore debt refinancing, working capital and other general corporate purposes.

A Foreign Currency Convertible Bond (FCCB) is a type of convertible bond issued in any other than the issuer’s local currency. As with convertible bonds, investors receive not only interest and principal payments, but also have the option to convert their bonds into stock. Issuers find FCCBs beneficial as coupons are generally lower and could reduce debt if it gets converted into equity. For investors, they can participate in any price appreciation in the issuer’s stock upon conversion besides or alternatively get a fixed return. Reliance Infrastructure is set to raise INR 7.5bn via FCCBs.

Michael Decker, senior vice president of federal policy and research at the Bond Dealers of America

“We certainly welcome the three-month extension. Without it, you simply would have had a rule with no compliance,” Decker said. “Trying to squeeze fixed-income into the rule as it exists now would create a lot of problems.”

“I acknowledge that I thought of the rule’s application only in the OTC equity context.” “Nobody seems to have contemplated that this rule would affect the fixed-income markets in a way different from the pre-amendment version of the rule, much less that its requirements potentially would render unviable certain recent technological innovations in trading.”

“Any type of ruling that would run counter to functioning bond markets wouldn’t make a lot of sense to us,” McClain said. “I don’t see regulators really having a lot of teeth behind the kind of stuff that would gum up bond market liquidity.”

On the opportunities in China despite Evergrande crisis – Mohammed Alardhi, Executive Chairman of Investcorp

“We’re there for the opportunities, we’re there for the long term.” “It’s not a Lehman moment for sure for China,” he said. “The Chinese government has a lot of tools to deal with this if they decided to do that.” “We’re very bullish on the U.S. economy, we know all that’s happening in the world may dampen growth but we see good growth coming,” Alardhi said. “We still see strong fundamentals and lot of capital going into them,” Alardhi said. “Good growth of rent, good occupancy, resilient during Covid and we continue to do more of that.”

“I think the meetings [in the US] have been useful to clear up their doubts about the political scenario which some were worried about, that’s their main concern.” “I think the explanations we gave strongly dissipated the doubts the investors had.” “It’s possible that we see an opportunity which suits us, in which case we’ll take it,” Francke said. “. . . . There seems to be quite an appetite among buyers for Peruvian bonds, that was quite clear in . . . all the meetings we had”. “Fiscal sustainability should not be something of the left or the right,” Francke said. “It’s something reasonable, it’s good economic management, just like keeping low inflation.” “We want to do a tax reform, cut tax evasion, raise fiscal revenues and in that way be able to make a big effort in education, in health, in basic infrastructure for rural areas, in the Andes and the jungle, where there’s a lot of discrimination, lots of inequality and lots of poverty,” Francke explained. “That’s our agenda for change”.

“We have not come here to scare off capital investment. Go invest in Peru confidently, without doubt and fear.”

Graham Stock, emerging markets sovereign debt strategist at BlueBay Asset Management
“It is generally expected that Peru will issue in the near future . . . and I think there will be decent demand,” he said. “But the uncertainty over the outlook may still mean that they have to offer a larger new issue premium to investors than normal for a high-grade sovereign.” 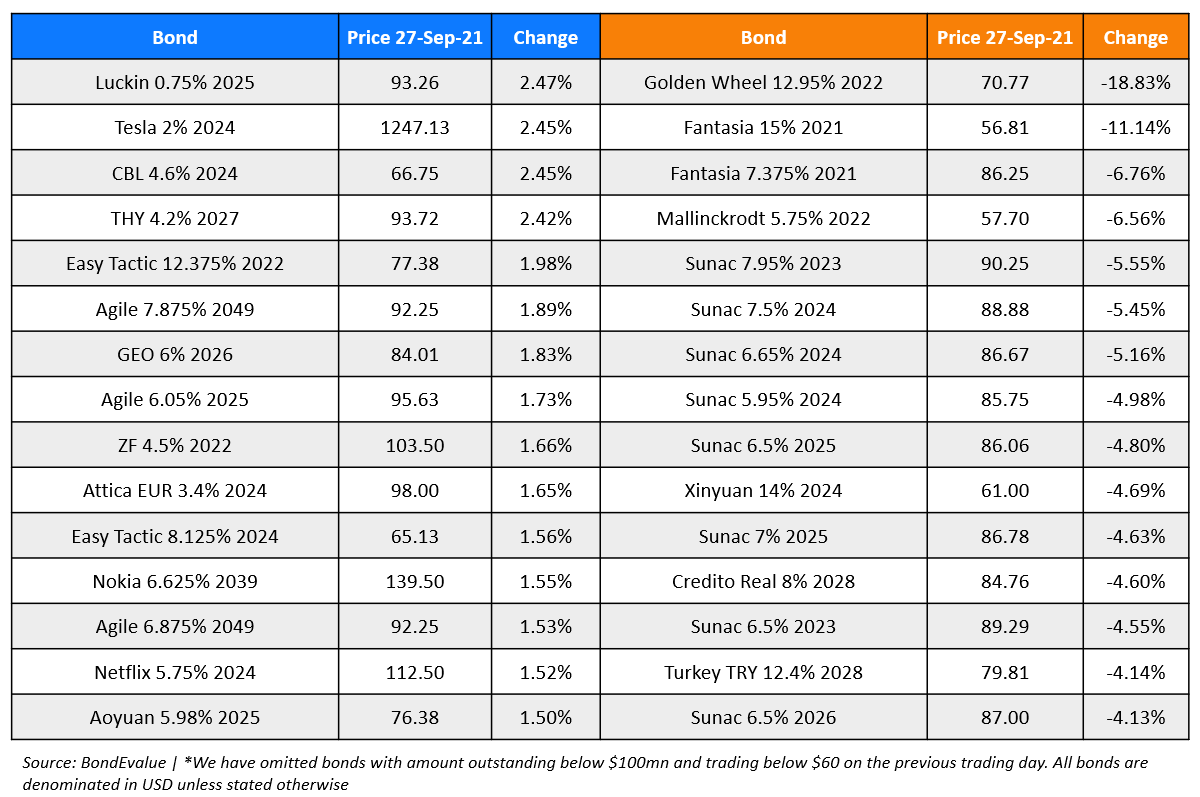