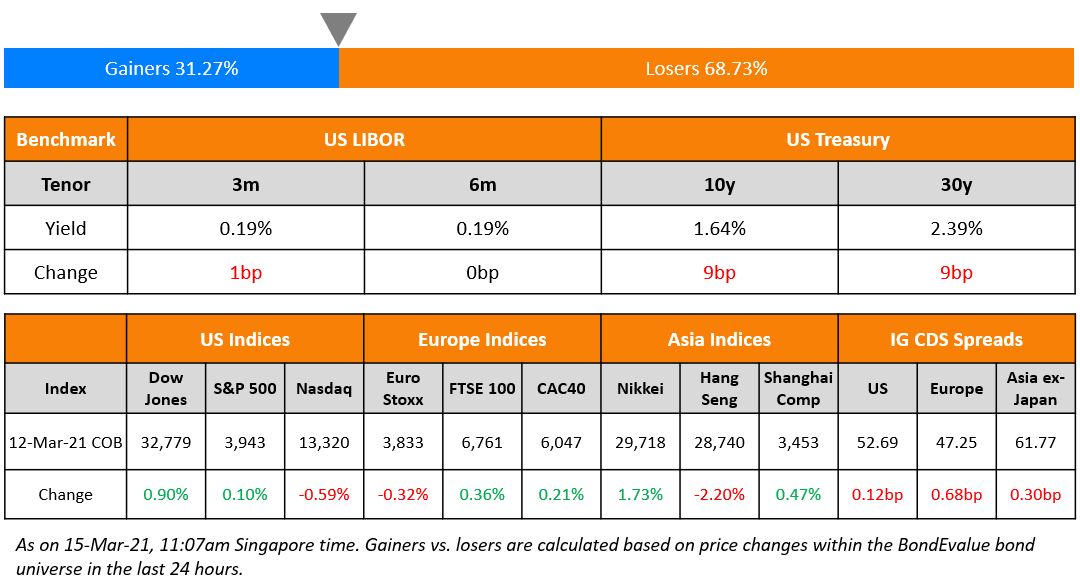 S&P ended Friday almost flat while Nasdaq slipped to end 0.6% lower after falling ~1.7% mid-day. US 10Y Treasury yields shot higher by 9bp to end at 1.62% on Friday. Mixed moves were also seen in European equities on Friday as the DAX and Eurostoxx fell 0.5% and 0.3% while FTSE and CAC ended 0.4% and 0.2% higher. US IG CDS spreads were 0.1bp wider and HY was 4.3bp tighter. EU main CDS spreads were 0.7bp wider and crossover spreads widened 4.9bp. Asian equity markets are lower 0.5%. Asia ex-Japan CDS spreads were up by 0.3bp.

We are also conducting a complimentary webinar “Navigating The Bond Markets by Leveraging The BEV App” on March 17, 2020 to help users exploit the BondEvalue app to manage their bond portfolio on the WebApp as well as the Mobile App. 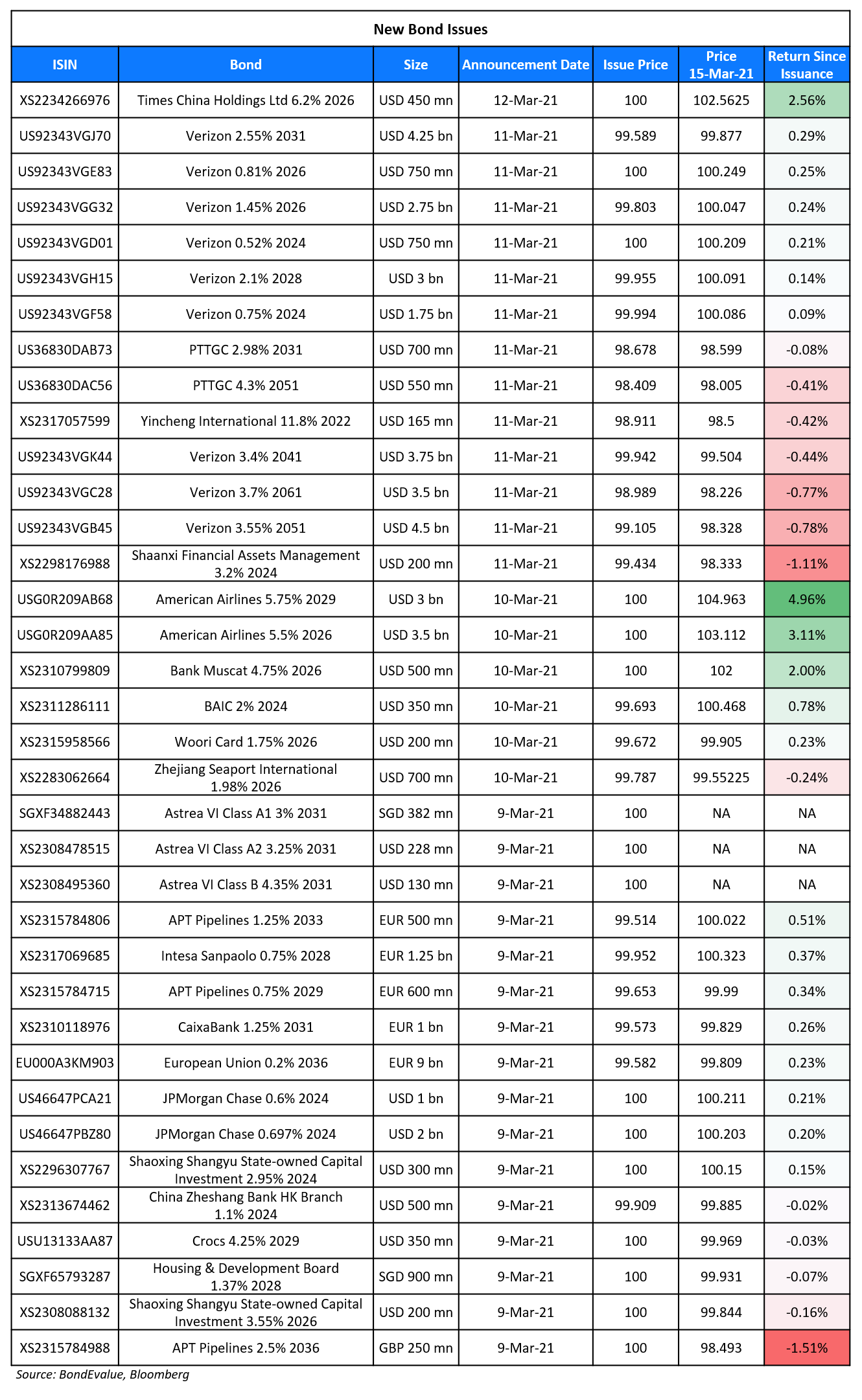 City Developments raised S$235m ($149mn) via a 5Y bond at a yield of 2.3%. Proceeds will be used for general corporate purposes. OCBC credit analysts said the pricing was below a fair value of 2.4%–2.5%, which would reflect a marginal deterioration in its credit metrics as its net gearing has increased to 93% currently from 61% in 2019. This comes amid a rather public scuffle between CDL and its China unit.

Times China Holdings raised $100mn via a tap of its 6.2% 2026s at a yield of 5.9% unchanged from initial guidance. The bonds have expected ratings of B1/B+/BB- and received orders over $2.1bn, 21x issue size. Proceeds will be used for debt refinancing. Asia Pacific bought 99% of the bonds and EMEA 1%. Fund/asset managers and hedge funds were allocated 82%, banks and financial institutions 11%, and private banks and corporates 7%. 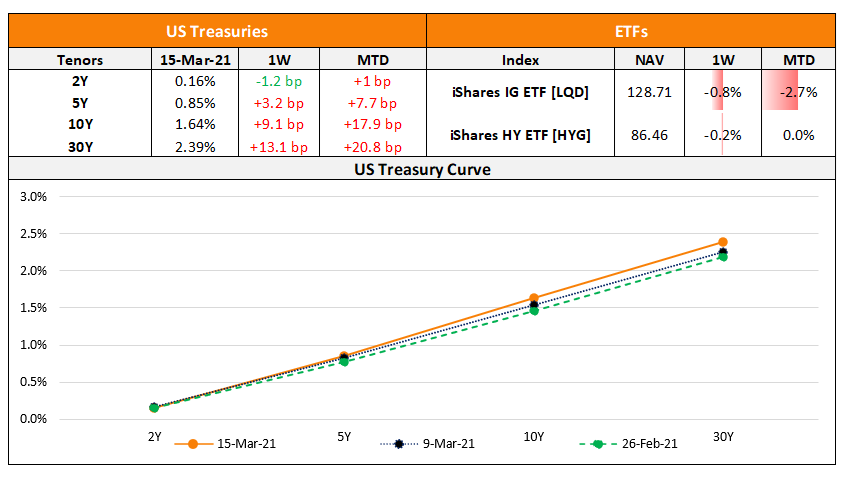 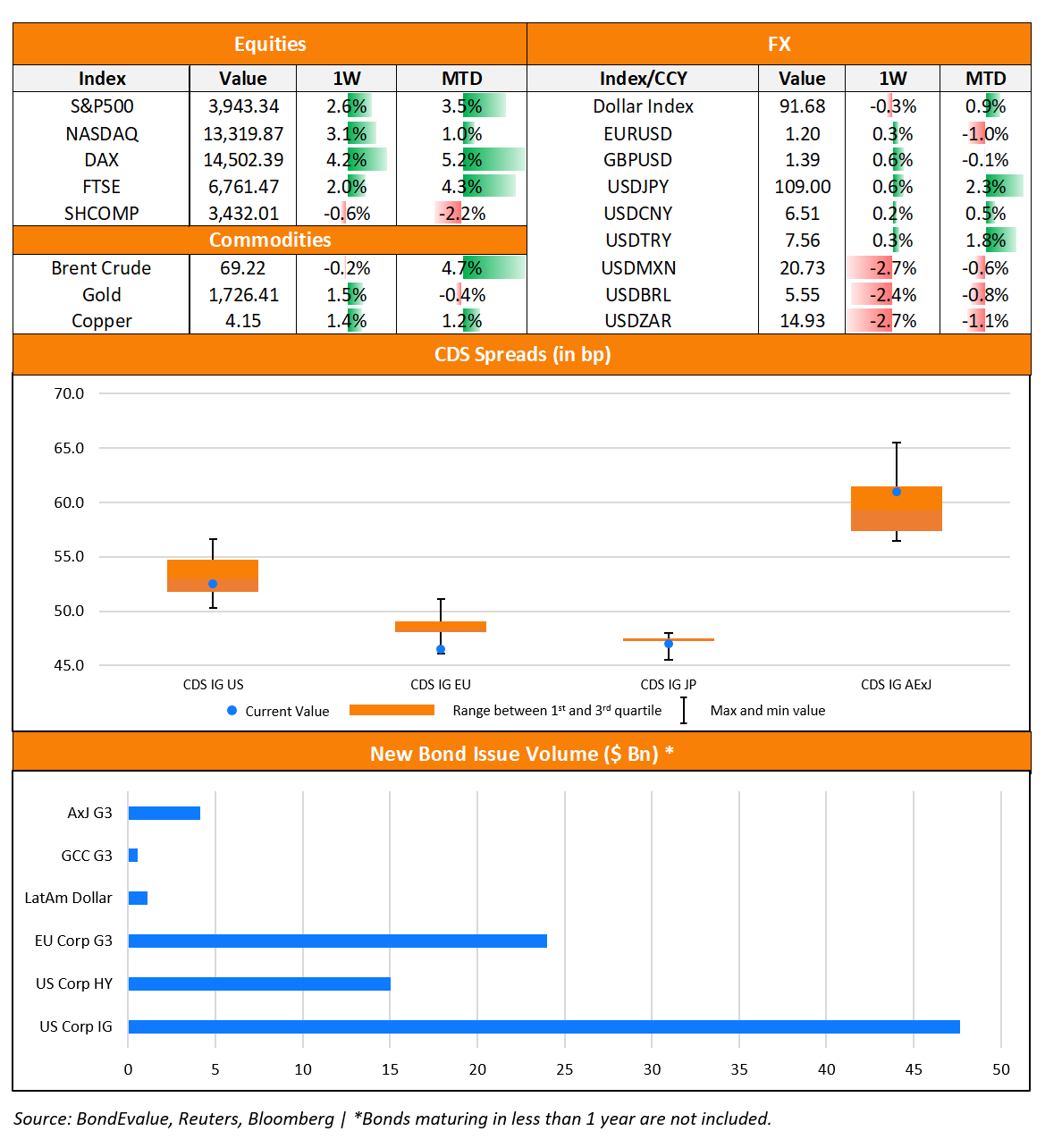 US primary market issuances stood at $63.1bn, up 27% vs. $49.5bn the week prior. The rise in issuance can be attributed to both IG, which stood at $47.4bn up 28% WoW, and HY, which was higher by 21% WoW at $15bn. The largest deals in the IG space were led by Verizon’s overall nine-part $25bn issuance, the largest bond deal YTD, led by their $4.5bn 30Y bond issued at a yield of 3.599%. Other prominent deals within IG include BofA’s $2.5bn and JPMC’s $2bn. In the junk space, American Airlines led with its $6.5bn bond issuance. In North America there were a total of 51 upgrades and 51 downgrades combined, across the three major rating agencies last week. LatAm saw $1.1bn of deals last week vs. $5bn in the week prior, down 78%, led by InRetail Consumer’s and VTR Communicaiones’ $600mn and $410mn deals. EU Corporate G3 issuance saw a decrease last week to $24bn vs. $38.27bn priced in the week prior – Intesa Sanpaolo’s €1.25bn ($1.5bn) was the largest single deal followed by Santander UK’s $1.18bn and Commerzbank’s €1bn ($1.2bn). GCC and Sukuk G3 issuances were at a meagre $500mn vs. $2.92bn in the week prior with Bank Muscat pricing the only deal, raising $500mn via a 5Y bond. APAC ex-Japan G3 issuances stayed relatively quiet with $5.4bn of new deals priced vs. $7.8bn in the prior week. APT Pipelines raised €1.1bn ($1.3bn) and Thailand’s PTTGC raised $1.25bn via a dual-trancher, followed by Zhejiang Seaport’s $700mn and Zheshang Bank’s $500mn issues. In the region there were 4 upgrades and 14 downgrades combined, across the three major rating agencies last week.

Securitization is the process of pooling and packaging different types of debt into securities which can be issued to investors. Investors would get the interest from the underlying pool of debt and this also helps the company raise capital. This is particularly seen in financial companies which issue multiple loans which are packaged together in the form of a security to be sold to investors. Examples of securitized assets include Asset backed Securities (ABS), Mortgage Backed Securities (MBS). A recent example is Astrea VI’s $643mn equivalent ABS offering backed by private equity funds.

On emerging markets bracing for rate hikes with debt at records

“The food-price story and the inflation story are important on the issue of inequality, in terms of a shock that has very unequal effects,” said Reinhart. “What you may see are a series of rate hikes in emerging markets trying to deal with the effects of the currency slide and trying to limit the upside on inflation.”

“While asset prices and debt issuers’ market access have largely recovered from the shock,leverage metrics have shifted more permanently,” they wrote. “This is particularly evident for sovereigns, some of which have spent unprecedented sums to fight the pandemic and shore up economic activity.”

In a report by Goldman Sachs Group Inc. analysts

“Given higher global rates and what is likely to be firming core inflation next year, we pull forward our forecasts for monetary policy normalization for most central banks to 2022, from late 2022 or 2023 earlier,” they wrote. “For RBI, the liquidity tightening this year could morph into a hiking cycle next year given the faster recovery path and high and sticky core inflation.”

In a report by Sergi Lanau and Jonathan Fortun, economists at Institute of International Finance

“Governments may be tempted to follow Janet Yellen’s clarion call to act big this year on fiscal policy, to continue to run large or even larger fiscal deficits,” he wrote. “However, this would be a dangerous strategy.”

“We are in the process of digestion,” Diaz de Leon said. “It’s part of what we will be evaluating, together with a reassessment of the inflationary process and the factors behind it.” “We are still in a level of negative output gap,” the governor said. “We hope that the rest of this adjustment keeps happening in an orderly manner.” “Neither the markets nor the analysts have the set of information and forecasts that we have in front of us,” he said. “It is not just the latest data point or the latest data, it’s the whole process that we try to incorporate into the conduct of monetary policy,” Diaz de Leon said.

“Certainly the cleaner monthly data will become market-moving,” he said. “Anything less than that will be reasonably bearish,” he said, while more than 80 billion euros would be considered “reasonably bullish.”

“The ECB’s current stance is not enough to remove the risks of even faster increases in bond yields,” he said. “The eventual revelations of the actual new purchase pace may end up a disappointment.”

“The closer we get to the quarterly review date, the bigger the risk of a spike in rates and volatility, and thus also spreads,” she said.

“Domestic debt markets is where we’re more concerned about the impact of rising yields,” Lysenko  said. “Several emerging markets already had very significant fiscal weaknesses before the COVID-19 pandemic and we expect their debt ratios to rise over the next years and if the cost of funding is going up we could see even worse debt trajectories in Brazil and South Africa.” “In Brazil, the risk of (debt) rollover is quite significant and that’s something we’re watching closely,” said Lysenko. “In South Africa, what we’re watching is both efforts at fiscal control and the rising cost of funding, as interest rate payments are already among the highest in key emerging markets.” 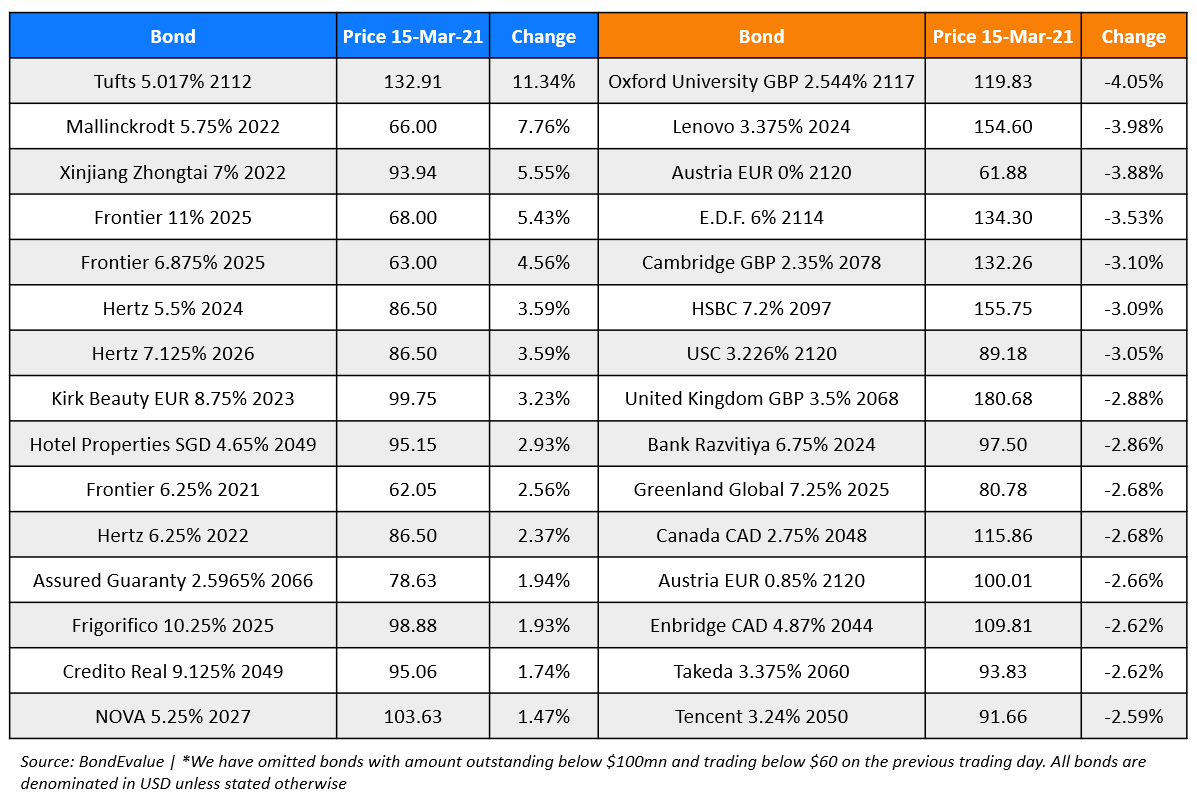