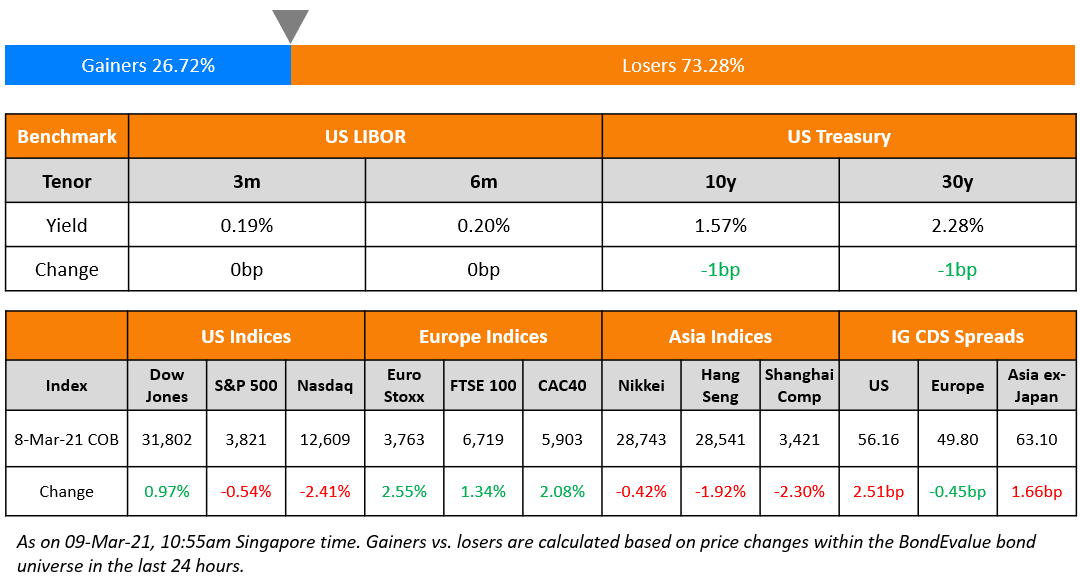 US equities slid again with the S&P down 0.5% while the Nasdaq took a bigger beating, down 2.4% as tech stocks got hammered. The tech heavy Nasdaq has now fallen 10% from its highs made last month. Utilities, financials and materials sectors outperformed. US 10Y Treasury yields were stable at 1.57%. The US House is poised to vote on the Senate’s version of the stimulus bill on Tuesday. European shares moved in the opposite direction with the DAX up 3.3%, CAC up 2.1% and FTSE up 1.3%. US IG CDS spreads were 2.5bp wider and HY was 12bp wider. EU main CDS spreads were 0.5bp tighter and crossover spreads tightened 0.6bp. Asian equity markets are lower 0.3% and Asia ex-Japan CDS spreads were up by 1.7bp. In the primary markets, India’s state-owned IRFC pulled its proposed dollar bond, which Bloomberg attributed to investors demanding a higher new issue premium. 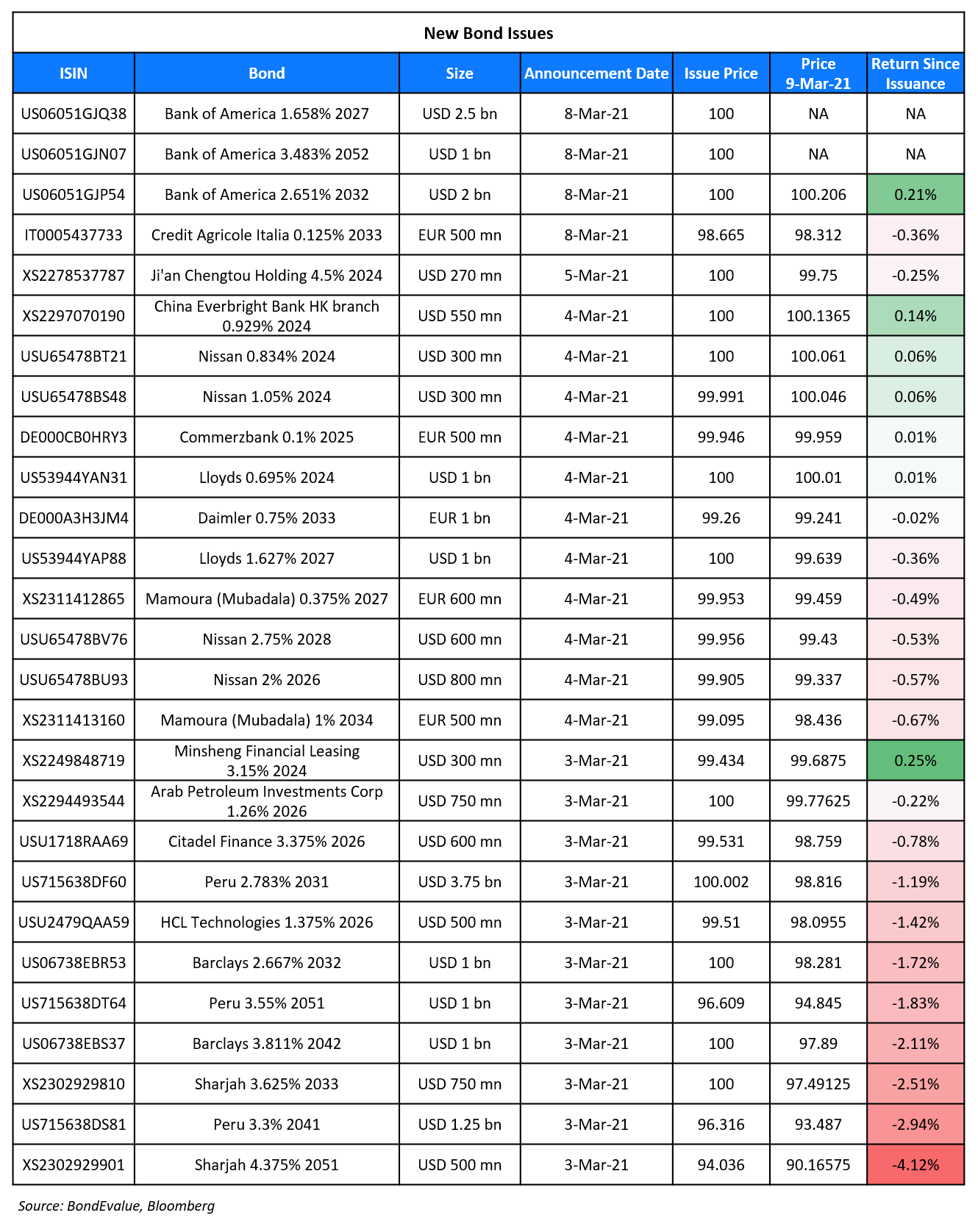 Credit Agricole Italia raised EUR 500mn ($593mn) via a 12Y green covered bond at 0.238%, or 9bp over Mid-Swaps, just a basis point inside initial guidance of MS+10bp area. The bonds received orders over EUR 750mn ($889mn) and proceeds will be used for a green bond loan.

Of the Class A-1 tranche, the issuer plans to allocate S$250mn to retail investors and the balance S$132mn to institutional investors. Holders of this tranche stand to receive an additional 0.5% if the underlying portfolio meets its performance target of generating over $407mn in cash. Demand for the issuance is strong, going by the order book as at Monday afternoon when orders had reached S$1.1bn, $900mn and $550mn, 2.9x, 3.9x and 4.2x for the A-1, A-2 and B tranches respectively.

On US stimulus unlikely to cause inflation problem – Janet Yellen, US Treasury Secretary

“I really don’t think that’s going to happen,” she said. Inflation before the pandemic “was too low rather than too high,” she noted. “If it turns out to be inflationary, there are tools to deal with that,” she said. “We have a K-shaped recovery going on, in which high-income people are doing much better than those at the bottom of the economic ladder — low-wage workers and minorities,” Yellen said. The problem pre-dates the coronavirus but was “made immeasurably worse by the pandemic.”

“I am bearish on the bond market,” said Brigden. “We just have too much stimulus coming into the system. It’s going to combine the growth with a very rapid acceleration in inflation.” “In the old days, bond yields should equal to nominal GDP,” said Brigden. “Things are very different now. But to what degree they are different? Can you have 1% negative real yield and 10% nominal GDP?”

On the suggestion that bond yields should be allowed to move more, but not to much

“A big fluctuation in interest rates could have undesirable consequences. But when it’s limited to a certain range, it’s possible to enhance bond market functions, without diminishing the monetary easing effect of our policy,” he said. “Personally, I feel yields should be allowed to move more, as long as it does not diminish the effect of monetary easing,” Amamiya said. “Some market players think the BOJ can’t and won’t ease policy further due to the side-effects of its policy. We must dispel such views,” he said.

“The BOJ probably wants yields to fluctuate a bit more. But it also wants to set a speed limit on how rapidly yields could move,” said Iwashita. “The message from the review could be pretty fuzzy.”

“Authorities are likely using up remaining quota from the previous year,” according to Zhou. “Local government bond supply is expected to accelerate between April and June and the central bank may have to step in with liquidity injections,” he said. 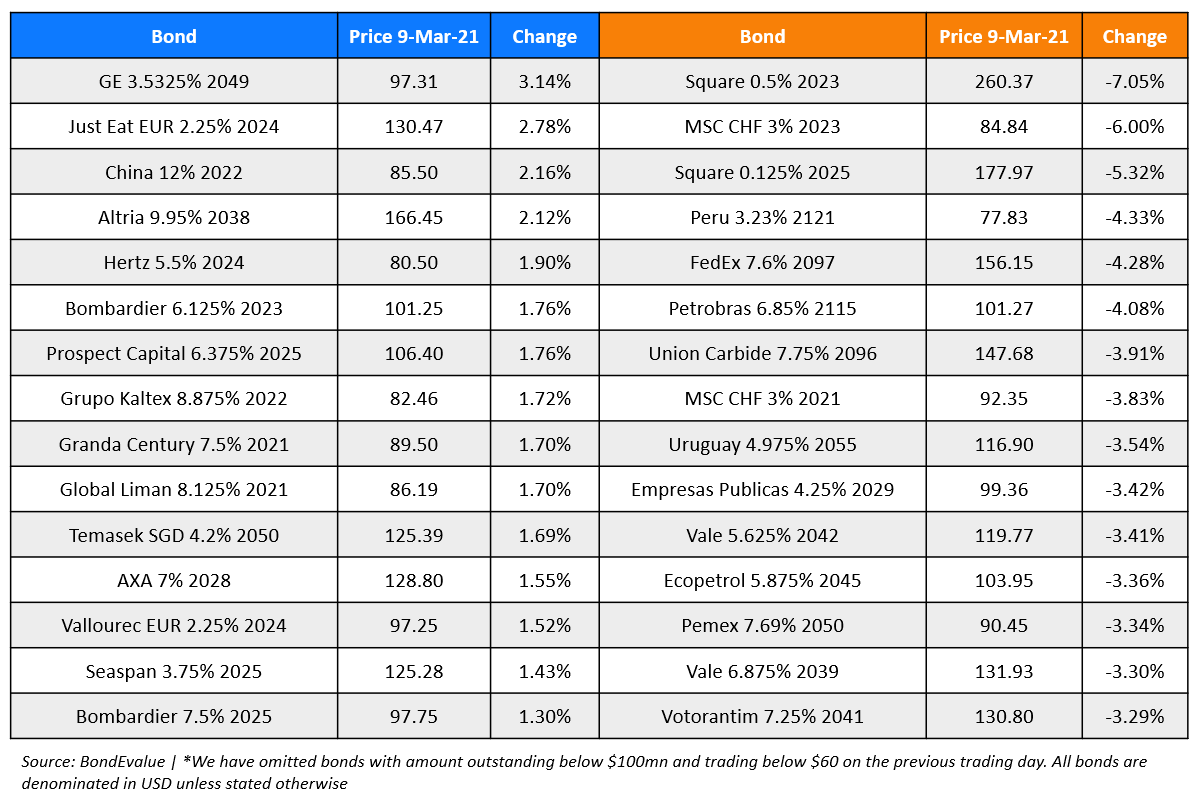