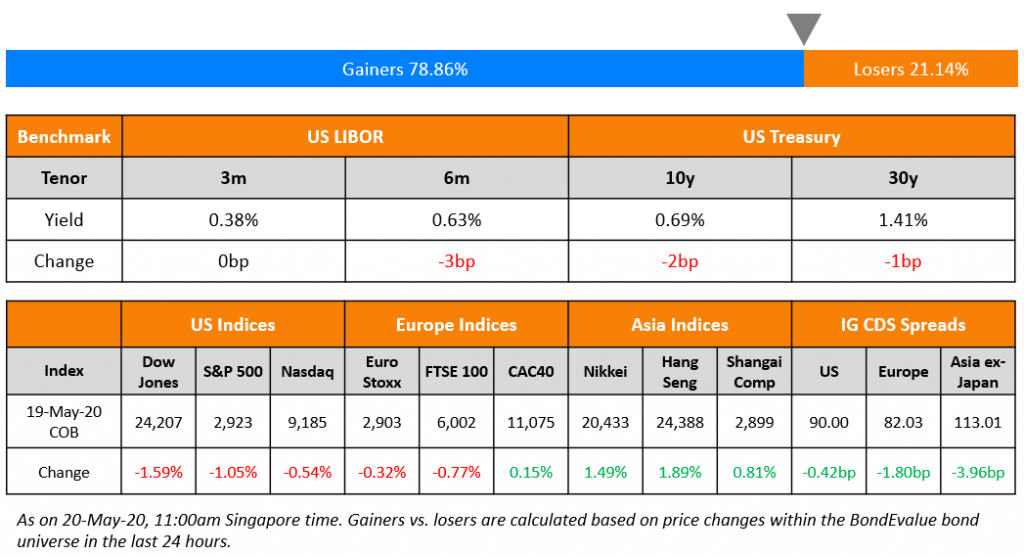 Rally stalls as markets gave up some of the gains from Monday after hopes quickly faded for a quick approval, production and dissemination of a working coronavirus vaccine. This was triggered by a STAT News report that questioned whether there was enough data on drug company Moderna’s experimental results to warrant the euphoria. Both US and European stocks were lower and treasuries recovered some ground on a revived safe-haven bid. Markets seem to be doing better this morning and both Asian stocks and US futures are opening marginally higher by 0.5%.

CDS spreads continued to tighten across the globe as Chinese issuers returned to the Asian primary market, making it a busy day of new deals. Airline Garuda International proposed a 3-year extension for the $500mn Sukuk Repayment. Financial and Utility companies were the most active in the US high grade market including JP Morgan and Royal Bank of Scotland. Country Garden, rated BB+/Ba1/BBB-, raised $544mn via 5Y non-call three bonds at a yield of 5.4%, 70bp inside initial guidance of 6.1% area. This is in line with its 5.125% bonds due Jan 2025 and its 6.15% bonds due September 2025, which are trading at a yield of 5.34% and 5.41% respectively on the secondary markets. According to IFR, investor demand was strong for these bonds with orderbook exceeding $7bn, almost 13x issue size. The Chinese real estate developer has now exhausted its offshore issuance quota as it had indicated around $540mn remaining the day prior to launching the new bond.

Fellow real estate player, Hongkong Land raised $600mn via 10Y bonds at a yield of 2.937%, 220bp over Treasuries and 45bp inside initial guidance of T+265bp area. The bonds, expected to be rated A/A2, are said to have received orders of over $4.5bn or 7.5x issue size according to IFR.

Another Chinese real estate developer Redco Properties raised $150mn via 3Y non-call-non-put two-year bonds at a yield-to-put of 14.875%, 12.5bp inside initial guidance of 15% area. The bonds are puttable at 100 at the end of two years and callable at 102.5 at or after two years. The proceeds will be used for a capped tender offer at 100 for its $310.4mn 11% bonds due Aug 29. The cap for the tender offer will be the lower of the amount outstanding of bonds tendered and the $150mn new bond issue.

Indonesian state-owned carrier Garuda announced a restructuring proposal for its $500mn 5.95% sukuk due on Jun 3. The company has proposed extending the maturity by three years and waiving off its covenants until its operations are restored to normal pre-pandemic levels. It is offering an “early bonus” of 1.25% of principal to holders that consent to the proposal by Jun 1. The holders that consent to the proposal post Jun 1 but before Jun 8 will get 0.5% of principal. The carrier is in talks with the government, which owns 60% of the airline, for support but the structure and details about this are still under discussion. The sukuk have inched higher by 0.75 points since yesterday’s close to 46.625 cents on the dollar currently.

Moody’s downgraded the issuer rating of Genting Berhad and its wholly-owned subsidiary, Genting Overseas Holdings Limited to Baa2 from Baa1. The credit rating agency also downgraded its senior unsecured bonds issued by GOHL Capital to Baa2 from Baa1. It maintained the rating of Genting Singapore Limited at A3 and changed its outlook on all ratings to negative from rating under review. Moody’s cited the impact of the coronavirus on the gaming industry, weaking credit profile of the group and its exposure to Malaysia and Singapore as reasons for the downgrade. “The downgrade reflects our expectation that GENB’s credit metrics will weaken and remain at levels no longer consistent with its Baa1 rating, driven by the weakened operating performance and the temporary closure of its integrated resorts worldwide due to the coronavirus outbreak at a time when debt is increasing to fund the development of Resorts World Las Vegas,” said Jacintha Poh, a Moody’s Vice President and Senior Credit Officer.

Moody’s cut the credit rating of Carnival Corp. by one notch to Ba1 (junk rating). It also lowered the senior unsecured notes to non-investment grade ratings. According to Moody’s, sailing is expected to remain suspended beyond July 24, which is the date for cruise suspension as per the ‘no-cruise order’. Even though the company plans to take actions to cut costs by cutting jobs, reducing salaries and shorten work weeks, the prolonged suspension has hit both its top and bottom line profits. The world’s largest leisure travel company valued close to $30bn reported a profit of $3bn in November 2019. However, the financial metrics have had a huge fall since the onset of the pandemic. The company was rated as A- by S&P and A3 by Moody’s in February and the ratings have dropped steadily since then even though S&P continues to maintain its investment grade rating of the company. Commodity-related bonds including Indonesian oil exploration company Medco Energi and India’s Vedanta Resources jumped on Tuesday, after oil rose for a fourth day and stayed above $30 a barrel. Medco Energi’s 6.75% bonds due 2025 are up roughly 10% while Vedanta’s 6.125% bonds due 2024 are up around 5% as can be seen from the charts below. 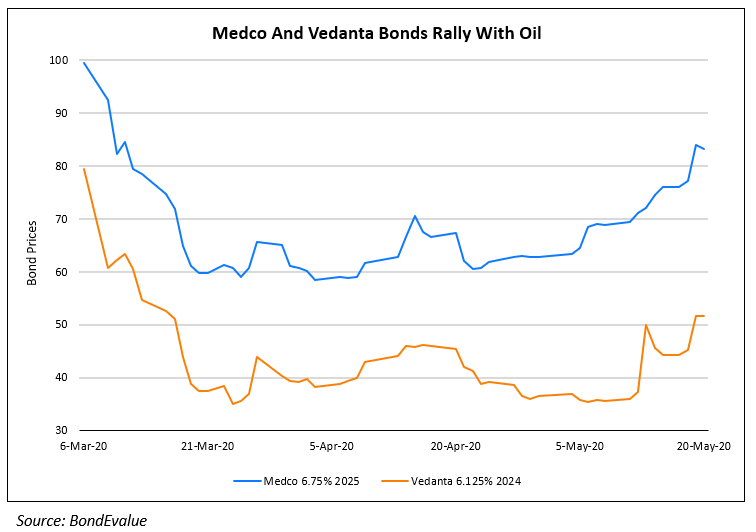 Earnings before interest, tax, depreciation, amortization and coronavirus. This post pandemic term reflects the profits a company would have made in case there was no effect on the profits due to the lockdowns and disruptions in the supply chain post CoVID-19.

Bond Investors Balk at Use of ‘ebitdac’ to Skirt Debt Restrictions

Bond investors have hit out at the growing trend of companies reporting “earnings before coronavirus”, warning that this new pandemic-era financial metric could allow businesses to use imaginary numbers to raise more debt than they can handle. Fund managers have long complained about the heavy adjustments riskier companies make to their earnings when borrowing from the high-yield bond market, often as part of an attempt by their private-equity owners to massage leverage levels — or the ratio of debt to operating profits — to make buyouts look safer. But several companies recently pushed this one stage further by reporting their “ebitdac” — earnings before interest, tax, depreciation, amortisation and coronavirus — for the first quarter of 2020. Investors also voiced concerns about companies raising debt based on coronavirus-adjusted historic earnings figures. Peter Aspbury, lead portfolio manager for European high yield at JPMorgan Asset Management, said this would allow businesses “to basically distort the reality enough to the detriment of creditors”.

Japan’s second-richest man and CEO of SoftBank seemed to have compared himself to Jesus on Monday while explaining how his Vision Fund lost a supernatural $18bn in the fiscal year ended March 31, according to the Financial Times. Roughly $10bn of that red sea of lost value was related to ungodly losses on WeWork and Uber. That news came the same day Son announced SoftBank Group is losing one of its key disciples: Alibaba founder Jack Ma, who is departing from the board. On an investment call, Son said he noted that Jesus, too, was criticized and misunderstood for his tactics. In other words, history will likewise be kind to SoftBank’s strategy. As bookends go, Ma’s exit after 13 years on the SoftBank board couldn’t have been more poorly timed. Son was cryptic about why Ma is leaving the scene, yet Ma’s presence bestowed a kind of halo-effect on SoftBank. It was Son’s $20mn bet on Alibaba in 2000 that made his reputation as an otherworldly investor. SoftBank bonds haven’t reacted much to the widely expected losses.

Luckin Coffee, a Starbucks competitor in China, said Tuesday it has been asked by NASDAQ to delist from the US stock exchange following a massive fraud scandal that has shaken the company. The announcement comes almost exactly a year after Luckin Coffee made a stunning debut on Wall Street, with a market value of some $4 billion. But shares sunk 70 percent earlier this month after the company disclosed that its chief operating officer, Liu Jian, may have faked 2.2 billion yuan ($310 million) worth of sales in 2019.

Luckin’s dramatic fall from grace this month blindsided some of the top names in global finance but few have seen a bigger fallout than Credit Suisse. Credit Suisse was the lead underwriter for Luckin’s initial public offering last year in New York and the secondary sale in January, garnering 60% of the banking fees, estimated at $30mn for two deals valued at $1.2bn. Credit Suisse wasn’t the only firm caught out by the scandal at Luckin, whose offices were raided this week by Chinese regulators. Luckin’s early investors included global giants such as GIC, the Singapore sovereign wealth fund. Morgan Stanley was part of the IPO group and provided some of the margin loans to Lu, as did Barclays, among others. Morgan Stanley, Credit Suisse and the other IPO banks face an investor lawsuit after Luckin’s 91% collapse from its January high.

Luckin Coffee’s dollar convertibles due 2025 dropped from ~72 level to ~32 after news of the scandal and has not seen much movement since.