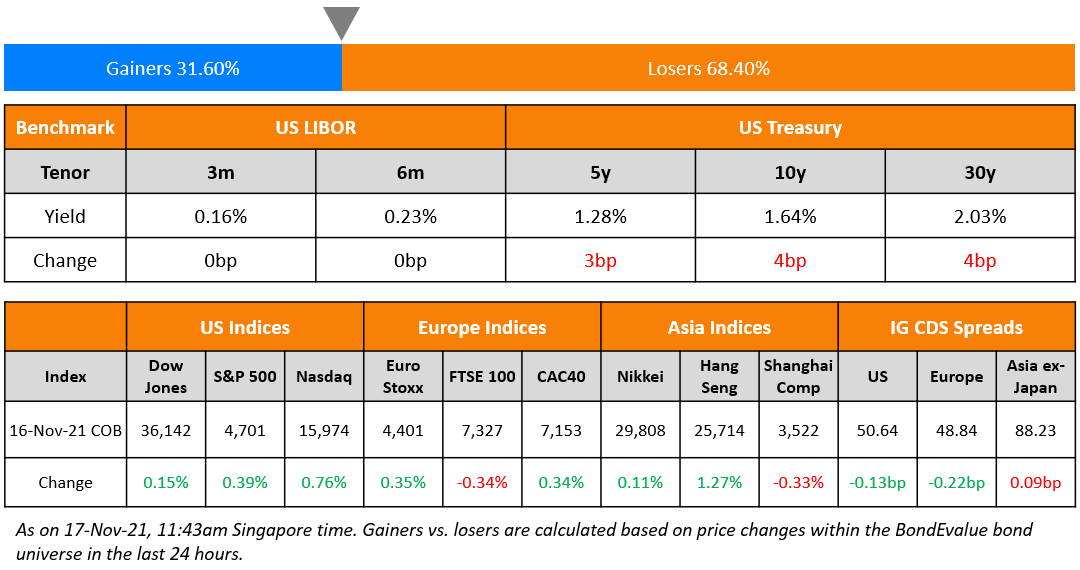 US equities ended higher with the S&P and Nasdaq up 0.4% and 0.8% respectively. Sectoral gains were led by Consumer Discretionary and IT, up over 1% each. US 10Y Treasury yields rose 4bp to 1.64% after strong retail sales numbers. European markets were mixed with the DAX and CAC up 0.6% and 0.3% while FTSE was down 0.3% respectively. Brazil’s Bovespa ended 1.9% lower. In the Middle East, UAE’s ADX was up 1% and Saudi TASI was down 0.1%. Asian markets have opened broadly lower – HSI, STI and Nikkei were down 0.5%, 0.3%, 0.4% while Shanghai was up 0.2%. US IG CDS spreads tightened 0.1bp and HY CDS spreads were 1bp tighter. EU Main CDS spreads were 0.2 and Crossover CDS spreads were 2.1bp tighter. Asia ex-Japan CDS spreads widened 0.1bp. 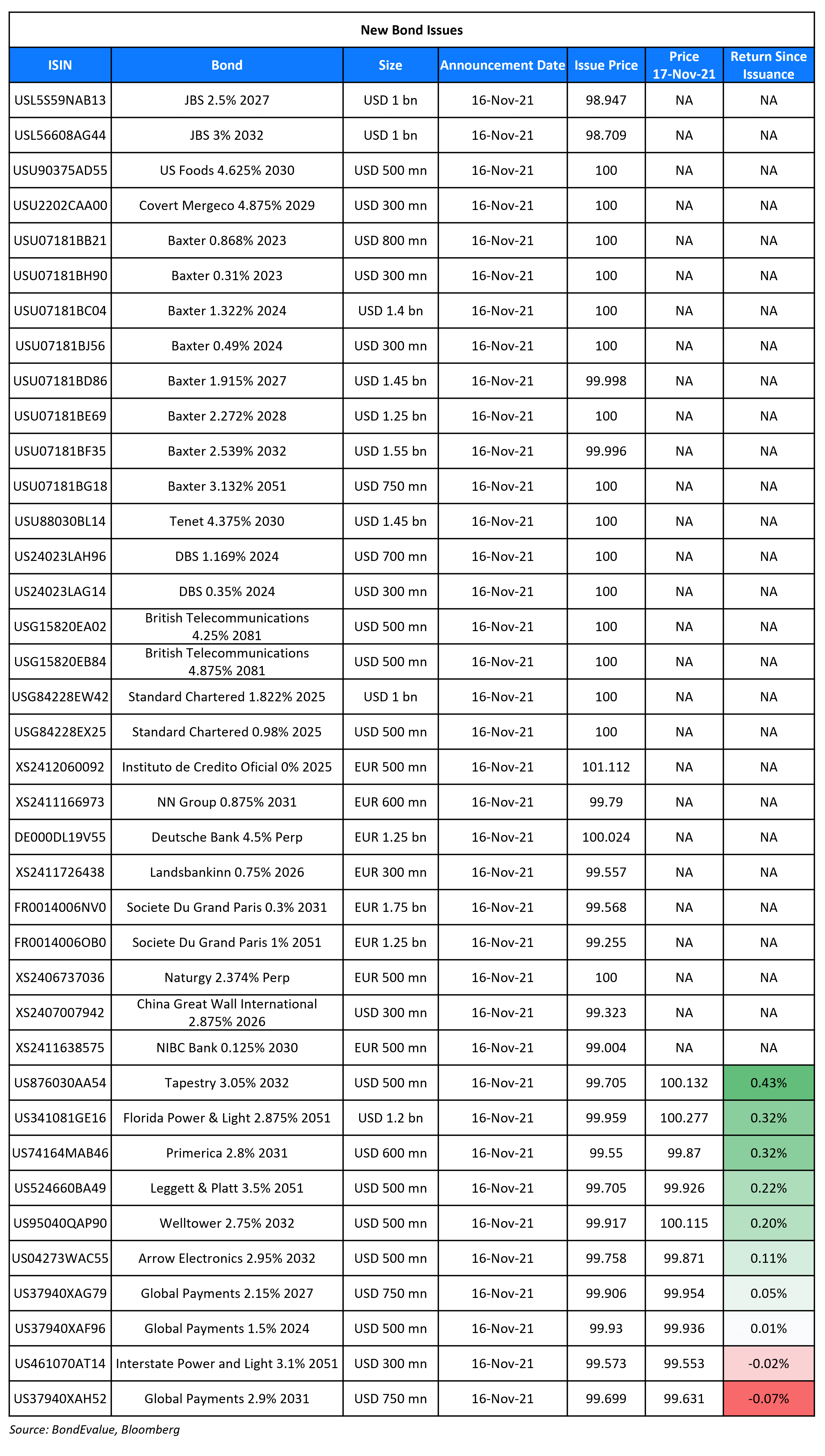 HDB raised S$1bn via a 5Y bond at a yield of 1.645%, unchanged from initial guidance and upsized from the planned S$800mn. The bonds have expected ratings of AAA (Fitch). Proceeds will be used to support HDB’s development programmes and to fund working capital as well as refinance debt. The new bonds are priced 3.5bp tighter to its existing 1.76% Feb 2027s that yield 1.68%.

Yulan bonds named after Shanghai’s city flower, a ‘magnolia’ are bonds that are denominated mainly in US Dollars and Euros which are issued through Shanghai Clearing House, a Chinese interbank bond market clearinghouse. Whilst similar to traditional dollar and euro denominated bonds, Yulan bonds will help international investors be able to benefit from real time multi-currency DVP (delivery-vs-payment) settlement with any counterparty within Euroclear Bank’s network where Chinese issuers are expected to access a deeper liquidity pool in a cost efficient way. For mid-sized Chinese companies with little experience in global markets, Yulan bonds offer “much wider access to an international investor base, and… a lower cost of borrowing”, said Ms Urbain, CEO of Euroclear Bank. Guotai Junan has launched 3Y Yulan bond.

“The whole linchpin here is do I see things persisting when the tentacles of the long tail of the delta variant start to move past us… If we don’t have another surge and we’ve got the same data you see today, and we’re in June or July, well it’s a different conversation… reacting in response to things that aren’t likely to last will move us farther from — not closer to — our goals”

“The market is pricing in the first rate hike literally right after when tapering ends… Our view is that there are huge Covid impacts on inflation that are going to start to decelerate. Growth is going to slow, inflation will peak… It is not obvious to us that the Fed has to turn around and start hiking aggressively … We actually have the first rate hike much later than when the market is pricing in, a steeper curve, the front end staying a lot more anchored.”

“I think there is tremendous promise in sustainability-linked bonds… But the reality, unfortunately, is that the structures and the penalties for not achieving the targets are mostly not substantial enough to drive real and true change among these companies”

“Investors aren’t buying it in the hope they get the step-up or that they can punish the company… This instrument is about companies asking to be held accountable on these targets and giving investors data to track that. We want that data. We want to open up the door between issuers and investors to get this conversation going.” 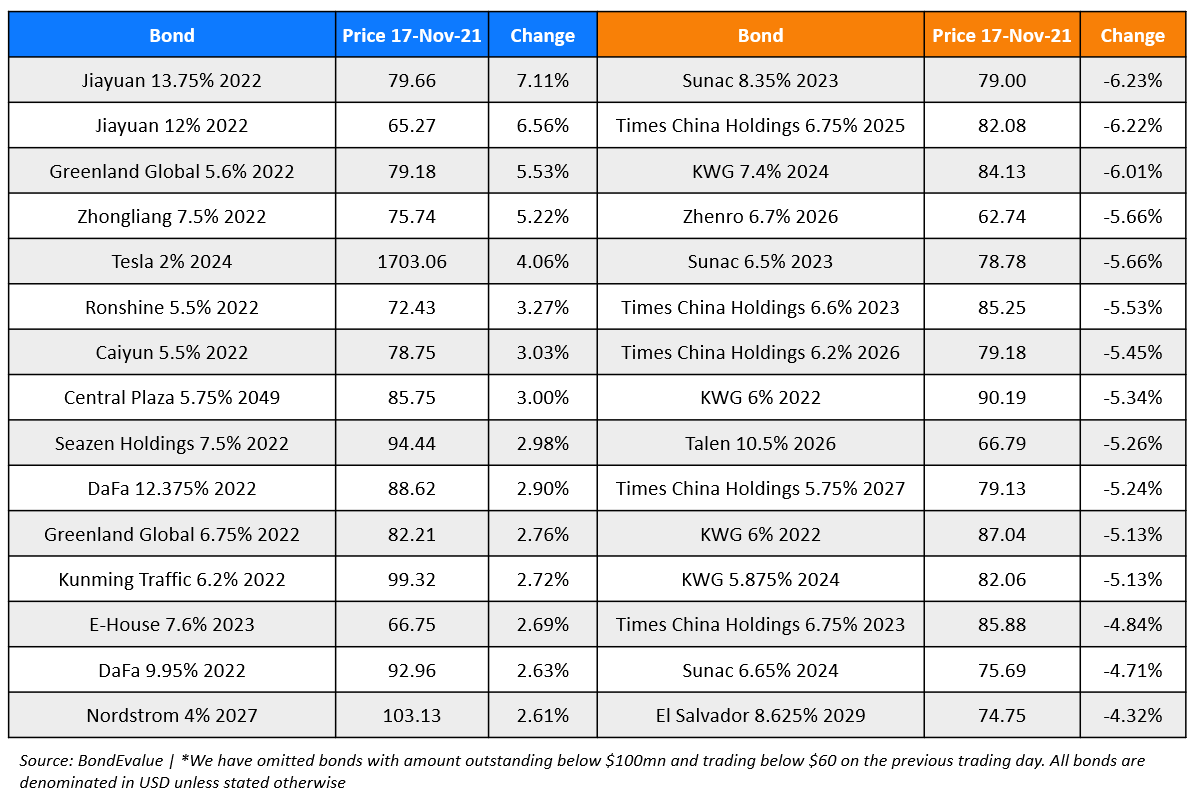