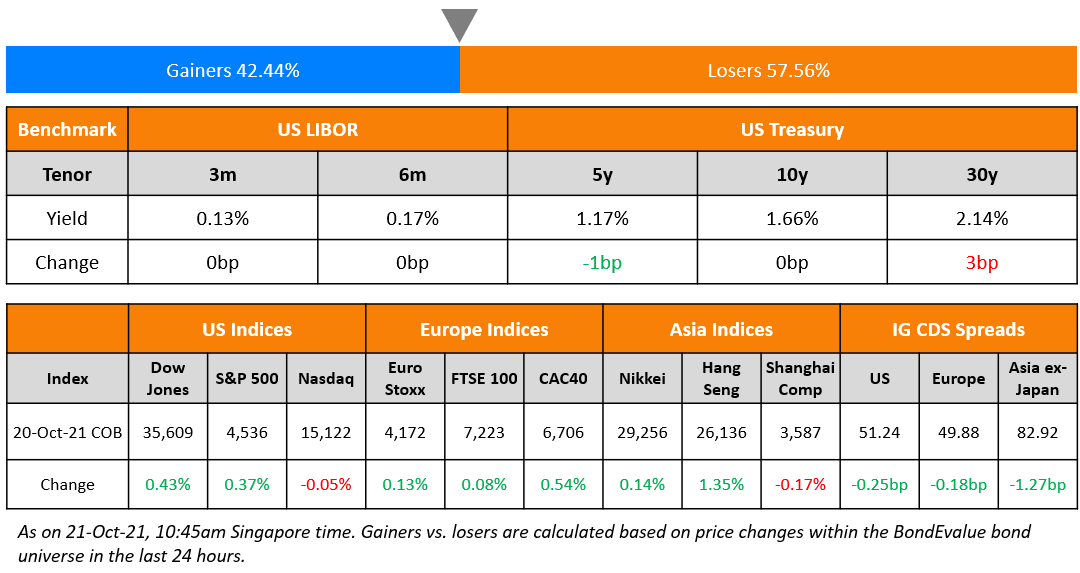 US equities had a mixed day with the S&P up 0.4% while the Nasdaq was flat. Sectoral gains were led by Utilities, Real Estate and Healthcare, up 1.4-1.6%. US 10Y Treasury yields were flat at 1.66%. European stocks were only marginally higher with the DAX and FTSE eking out less than 0.1% in gains while CAC was up 0.5%. Brazil’s Bovespa was also 0.1% higher. In the Middle East, UAE’s ADX was 0.2% lower and Saudi TASI was up 0.9%. Asian markets have opened mixed – Shanghai was up 0.5%, HSI and STI were flat and Nikkei was down 0.3%. US IG and CDS spreads were 0.3bp tighter and HY CDS spreads were almost unchanged. EU Main CDS spreads were 0.2bp tighter and Crossover CDS spreads were 1bp tighter. Asia ex-Japan CDS spreads tightened by 1.2bp.
China’s new home prices stalled with no change for the first time since the pandemic began in Feb 2020 after seeing a 0.2% MoM rise in August. Reuters notes that some analysts say that prices fell 0.08%, or even 0.1%, based on their respective calculations. Eurozone HICP inflation came at 1.9% YoY, in-line with expectations 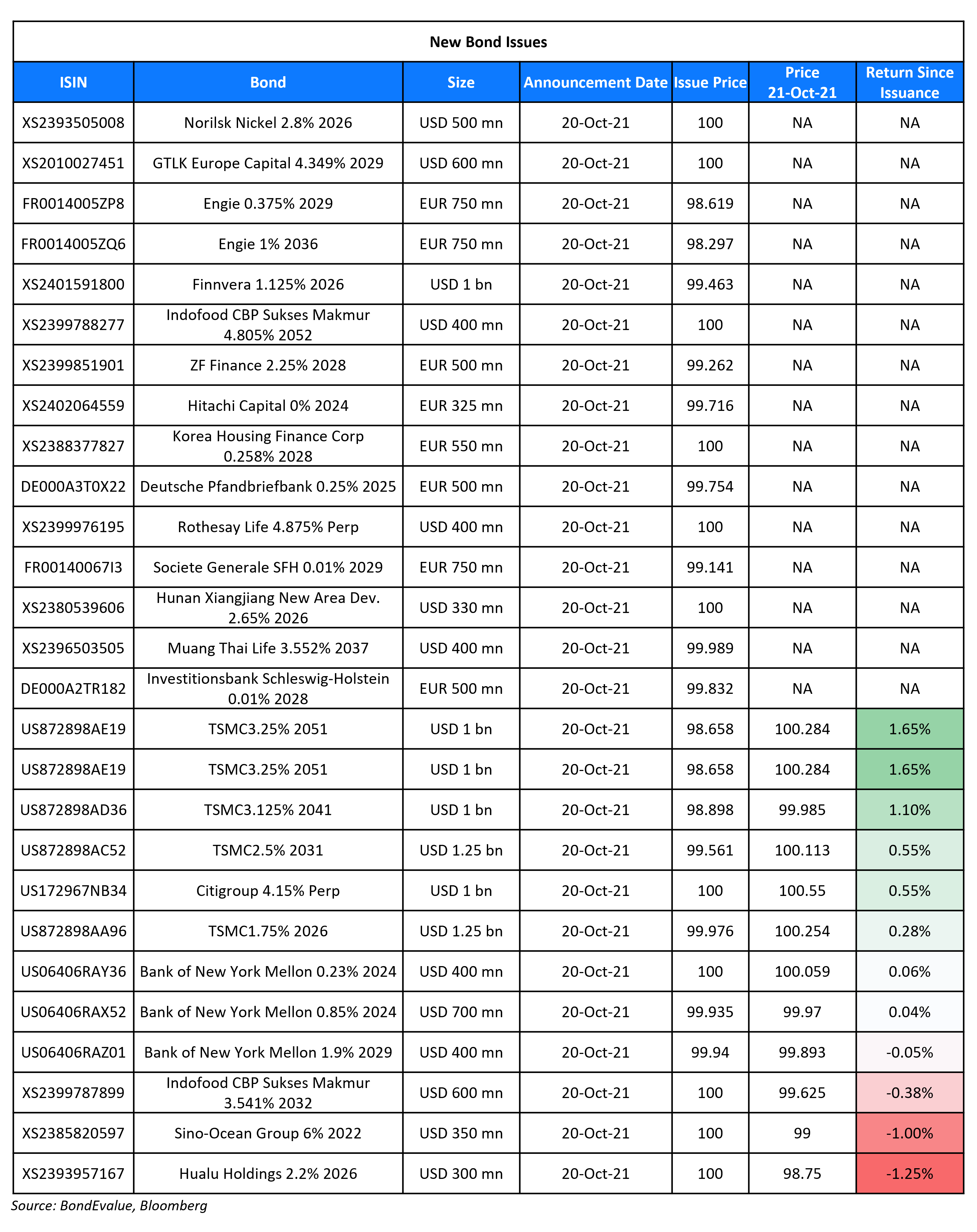 Bank of New York Mellon raised $1.5bn via a three-tranche deal. It raised:

The bonds have expected ratings of A1/A/AA-.

TSMC raised $4.5bn via a four-tranche deal. Details are given in the table below:

Muang Thai Life raised $400mn via a 15.25NC5 Tier 2 bond at a yield of 3.552%, 35bp inside initial guidance of T+275bp area. The bonds have expected ratings of BBB (Fitch). The coupon resets once on 27 January 2027 to the prevailing US 10Y Treasury + 240bp. The notes have a dividend stopper, and there will be a write-down in full or in part if the Thai insurer is unable to continue its business without material financial assistance from the country’s insurance industry regulator.

Hunan Xiangjiang New Area Development Group raised $330mn via a 5Y bond at a yield of 2.65%, 35bp inside initial guidance of 3% area. The bonds have expected ratings of Baa2 (Moody’s), and received orders over $1.5bn, 4.5x issue size. Proceeds will be used for general working capital, investment activities and debt refinancing. The issuer is a local government financing vehicle of the Changsha municipal government. Its main mandate is to promote the development of the Xiangjiang New Area in Changsha city, Hunan province in China.

Hualu Holdings raised $300mn via a debut 5Y bond at a yield of 2.2%, 60bp inside the initial guidance of 2.8% area. The bonds have expected ratings of A3/A– (Moody’s/Fitch), and received orders over $2bn, 6.7x issue size. The bonds will be issued by wholly owned subsidiary Hualu International Finance (BVI) and guaranteed by Hualu Holdings. Hualu Holdings is a state-owned capital investment company majority owned by Shandong SASAC in China, with businesses in coal chemicals, pharmaceuticals, environmental protection, leasing and trading.

“Real estate credit tightening – with home loans down by 510 billion yuan ($79.8 billion) year-on-year in the third quarter – was the biggest reason for the overall market freeze… Many developers have recently been exposed to a liquidity crunch, leading buyers to worry about buying buildings that are forever unfinished… It is expected that in the fourth quarter of 2021, the markets in most cities will enter an obvious adjustment cycle… If there is no significant easing of mortgage loans from October onwards, price wars will be the main buzzword in the real estate market in the fourth quarter”

“I would support a decision at our November meeting to start reducing these purchases. There is evidence in the past couple of months that a broader range of prices are beginning to increase at moderate rates, and I am closely watching those developments. If we are still seeing 4% inflation or in that area next spring, then I think we might have to reassess the speed with which we would be thinking about raising interest rates”

“The thought about raising interest rates is not a near-term consideration at all… We’re going to think about the decision coming up, which is about the asset purchases, and then as those wind down we’ll have time to assess where the economy is.”

“We think the lira will continue to weaken. There is limited anchor for the Turkish currency in this backdrop.”

Forecasts with a “high degree of uncertainty” that the central bank will cut rates by 100 basis points on Thursday. She sees the lira weakening to 9.80 per dollar by year-end and 11.60 by the third quarter of 2022, given that the bank will refuse to raise rates thereafter

On Traders Worrying Over Ghana Debt Trajectory Ahead of Budget

“Do they still have access to the Eurobond market at these levels? Could they issue one at a reasonable price?…The answer seems to be no… At this point they need to present a credible plan B on how they fund the budget in the absence of Eurobond issuance… In a worst-case scenario where debt is growing amid a global risk-off mood, Ghana may have to head back to the IMF.” 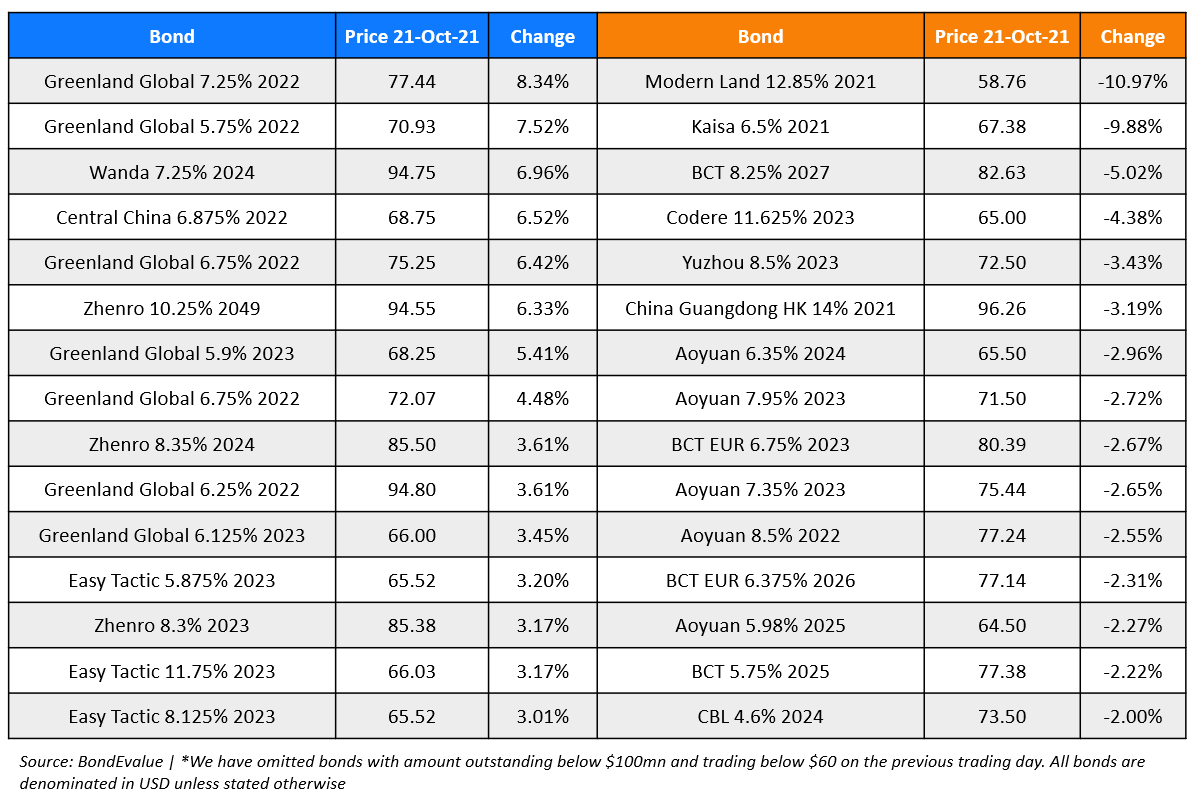