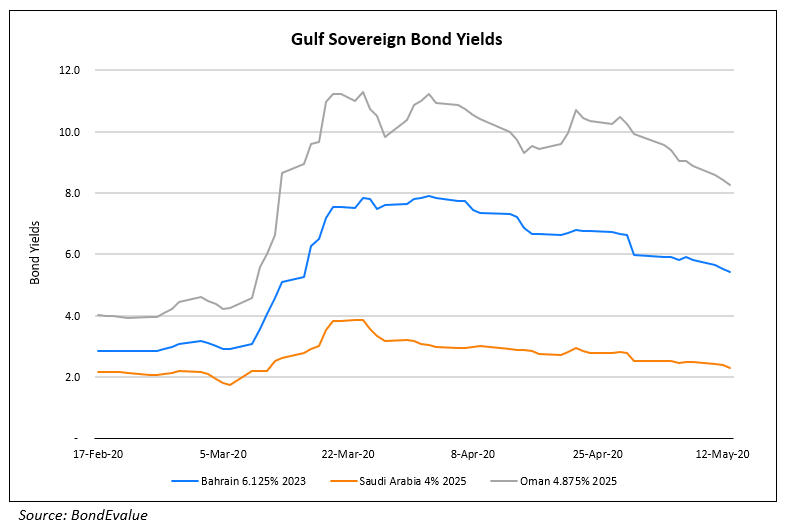 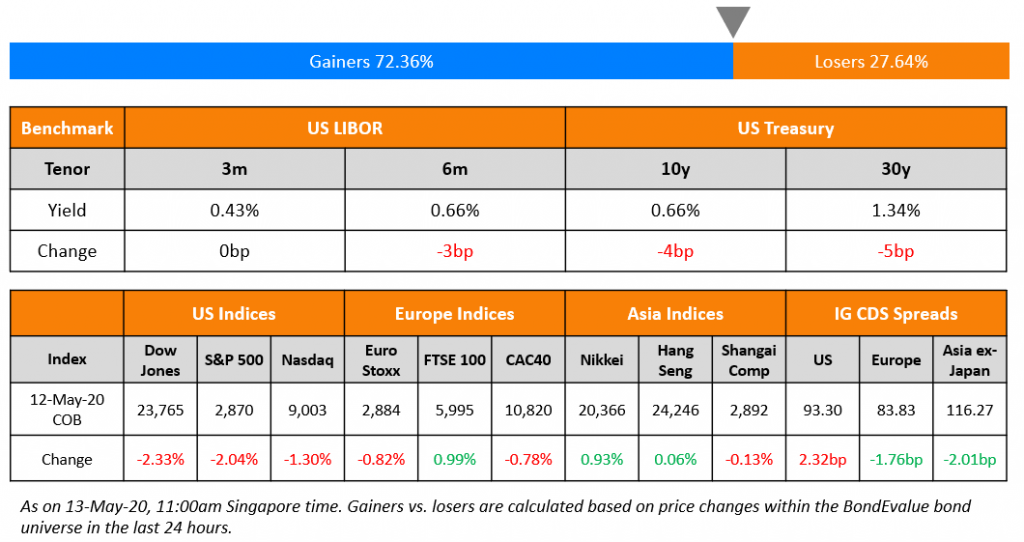 Markets fell as investors took profit after hearing senate testimony from the director of NAIAD, Anthony Fauci. Fauci told the Senate health committee that reopening the economy too soon ran “a real risk that you will trigger an outbreak that you may not be able to control … and could even set you back on the road to try to get economic recovery”. These comments along with new clusters in South Korea, Germany and China fueled the profit taking. US treasury yields were also lower helped by safe haven demand and a strong 10-year note auction. European shares fared better including the FTSE 100 helped by Sterling’s overnight slippage. Asian markets are set to follow Wall Street with a risk off tone.

Dollar bond deals in Asia continue to trickle in amid signs of strong demand. 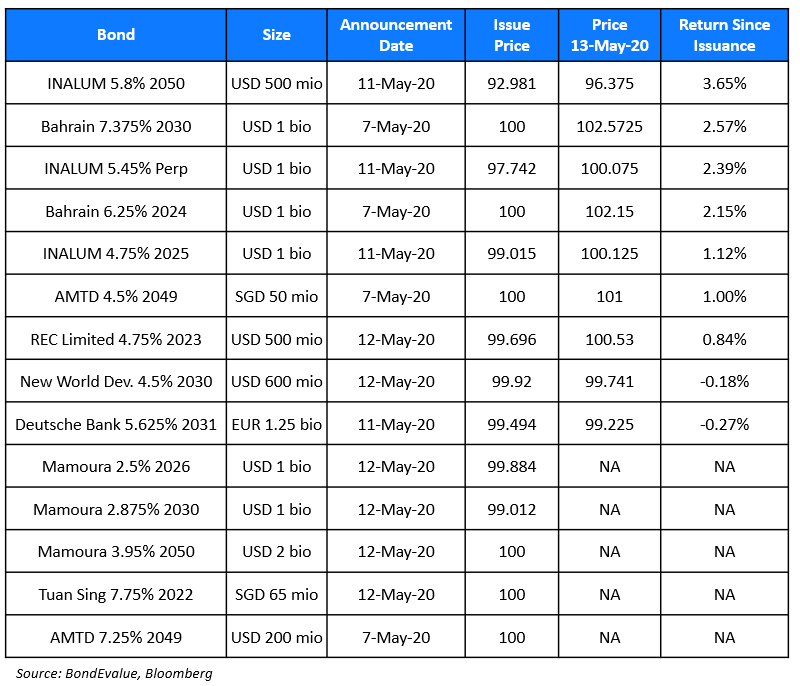 Mamoura Diversified Global raised $4bn via a three-tranche deal. Formerly known as Mubadala and owned by the Government of Abu Dhabi, Mamoura raised:

New World Development raised $600mn via 10Y bonds at a yield of 4.51%, 380bp over Treasuries and 40bp inside initial guidance of T+420bp area. The unrated bonds are said to have received orders worth $2.75bn ahead of the release of final guidance, according to IFR. The Hong Kong based developer last tapped the dollar bond markets in July 2019 with a 10Y bond at a yield of 4.2839%, 220bp over Treasuries at the time of issuance. The new bonds thus offer a premium of 160bp in terms of spread over Treasuries.

REC Ltd. raised %500mn via 3Y bonds at a yield of 4.86%. This was the first Indian investment grade bond in 3 months, with the previous issue by IRFC in February. The deal did not follow the typical new bond issue process of announcing an initial price guidance in terms of spread over Treasuries, and instead launched the deal with a final price guidance of 4.86%. The reason for the unusual deal process was the RBI’s yield cap wherein foreign currency borrowing with a tenor of 3+ years must have a maximum all-in cost of 450bp over US LIBOR. Thus, the public infrastructure financing company launched the bond at the max yield it could offer. The bond received strong interest from investors with orders exceeding $2.5bn, 5x issue size. The bonds offer a 16bp premium over its 5.25% bonds due 2023 issued in 2018, which are trading at a yield of 4.7% on the secondary market.

The central bank will kick off on Tuesday its Secondary Market Corporate Credit Facility, which is part of a history-making initiative in which it will purchase exchange-traded funds (ETF) that track the corporate debt market. Asset management giant BlackRock will be running the operation under the New York Fed’s supervision. In particular, the facility will buy up ETFs that hold so-called ‘fallen angels’, which are bonds of companies that formerly had been classified as investment grade but have been downgraded to speculative or junk, particularly in cases where those downgrades happened due to the coronavirus crisis. Fed will not buy ETFs that are trading at more than one standard deviation above their net asset value within a one-year time frame. Other considerations include the composition of both the investment grade and speculative debt, management style, the amount held in depository institutions, the length of time for which the syndicated loans are due, average daily trading volume and leverage.

The long-awaited stimulus package has been announced by PM Narendra Modi on Tuesday. Aiming to boost the economy, PM announced a Rs 20 lakh crore ($260bn) package which equals a tenth of the nation’s GDP. The package is inclusive of Rs 1.7 lakh crore announced earlier in March. The World Bank had recently predicted that the Indian economy will be 1.5-2.8% vs. an expect growth of 4.8-5.0%. In these circumstances, it was important to wage a two-front war – one against the pandemic and the other to provide stimulus to the slowing economy. The package will focus on land, labor, liquidity and law and will help small businesses, laborers and farmers as well as migrant workers as per the PM. The details of the package would be given by Finance Minister Nirmala Sitharaman who is also heading the task force formed to study the economic fallout of the pandemic.

Luxembourg headquartered ArcelorMittal raised $2bn via a sale of shares and mandatory convertible bonds to boost its liquidity and pare down debt. It raised $1.25bn via 3Y convertible bonds at a coupon of 5.5%. The minimum and maximum equity conversion price was set at $9.27 and $10.89 respectively. It raised $750mn via a share sale priced at $9.27 per share. The steel manufacturer managed to hold on to its investment grade rating of BBB- by S&P, which said “The execution of the recently announced $2bn capital raise, the ongoing $2bn divestment program, and other initiatives should support a net debt reduction of about $3bn in 2020 and another $2bn in 2021.” ArcelorMittal was downgraded to junk by Moody’s on May 8 and by Fitch on April 7.

S&P Says Oman Would Get Gulf Bailout If Needed

S&P Global Ratings said members of the Gulf Cooperation Council would likely come to Oman’s rescue if the sultanate experiences “significant external liquidity pressures,” especially in a situation that threatens its currency peg to the dollar. As a slump in oil prices and the coronavirus pandemic weigh on the country’s finances, S&P warned that Oman’s depletion of external assets could accelerate should the cost of borrowing abroad be “prohibitive” or if foreign investors decline to roll over maturing debt. In case it opts to seek external assistance, a package from the International Monetary Fund could be another possibility, although S&P said its understanding is that “the government is currently not exploring this option.” 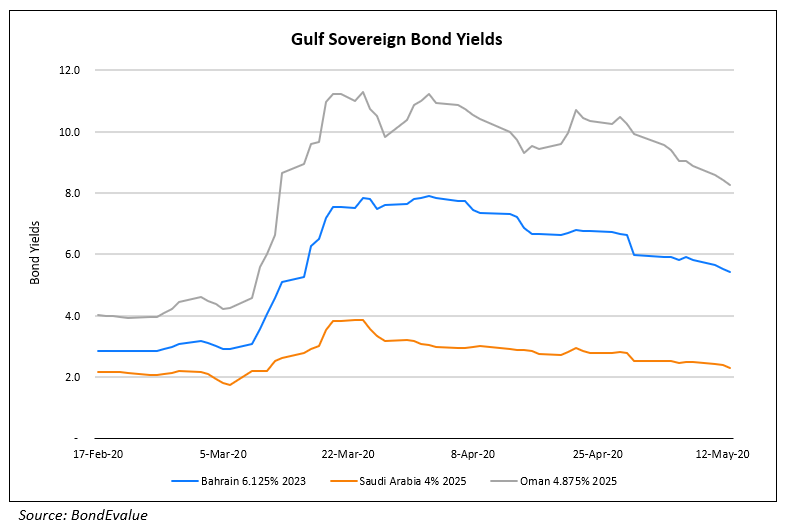 Billionaire Anil Agarwal led Vedanta Resources informed the exchanges on Tuesday that it would buy out the listed subsidiary Vedanta Ltd at Rs 87.5 per share, a 2% discount on its previous closing market price of Rs 89.3. The company also plans to buy Vendanta Ltd’s American depositary receipts (ADR). In total, public shareholders held 49.86% of Vedanta Ltd. The combined shareholding of Vedanta Ltd and the ADRs is 185.3 crore shares, which results in the total deal being valued at Rs 16,218 crore ($2.2bn). As of Dec 31, 2019, Vedanta and its subsidiaries had cash amounting to Rs 35,000 crore and a net debt of Rs 58,500.

The delisting is likely to aid the corporate simplification process and enhance the operational and financial flexibility in a capital-intensive business according to the group. The deal gives the shareholders an opportunity to realize the value of the shares immediately. This could be important to some shareholders in this time of high market volatility due to the pandemic. The deal comes at a time when the market is going through a phase of depleted cash flows and tight budget.

Sovereign and quasi-sovereign bond issuance from Indonesia stands at over $15bn year-to-date (YTD), a record for this period and almost 3x the issuance during the same period in 2019. The latest issue was by government-owned miner INALUM, which received orders over 6x the issue size of $2.5bn. Indonesia’s State-Owned Enterprises Minister Erick Thohir said last week that a number of state-owned companies are preparing to issue dollar bonds later this year, with Bank Rakyat Indonesia planning a $1bn issue in the third quarter. According to a Bloomberg-Barclays Index, Indonesian sovereign and quasi-sovereign dollar bonds have returned about 9% since markets bottomed around March 23, though on a YTD basis they have lost almost 4%. 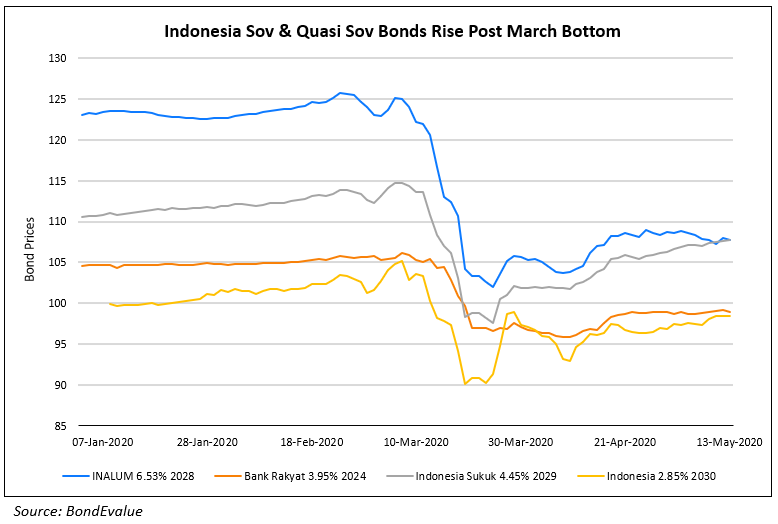 The kindling for another big emerging markets debt crisis has been accumulating for years. Investor demand for higher returns has allowed smaller, lesser-developed and more vulnerable “frontier” countries to tap bond markets at a record pace in the past decade. Their debt burden has climbed from less than $1tn in 2005 to $3.2tn, according to the Institute of International Finance, equal to 114% of GDP for frontier markets. Emerging markets as a whole owe a total of $71tn. Resolving the coming debt crises may be even tougher than in the past, however. Rather than the banks and governments — the primary creditors in the mammoth debt crisis that racked the developing world in the 1980s and 1990s — creditors are nowadays largely a multitude of bond funds. They are trickier to co-ordinate and corral into restructuring agreements.

The existing infrastructure for handling default and bankruptcy is also not adequate to cope with such a large and rapid wave of restructurings. Bankruptcy courts are concerned with ensuring that contracts are honoured and untangling the competing claims of creditors rather than protecting economic activity. Out-of-court renegotiations are difficult at the best of times; an era of social distancing and massive uncertainty makes them even harder. Credit is an enormously powerful tool: in the months and years ahead it will let many individuals, companies and governments survive an economic decline that would otherwise be devastating. Yet, recent experience shows it can also be fraught with dangers and amplify downturns. A resilient economy is a flexible one. Effective bankruptcy procedures are essential. But the most flexible form of finance is equity. The bigger the shocks we are exposed to, the more important genuinely loss-bearing equity becomes.

Fitch downgraded UniCredit’s Long-Term Issuer Default Ratings (IDR) to BBB- from BBB, with a Stable outlook. The downgrade follows Italy’s sovereign rating downgrade on April 28 from BBB to BBB-, as the rating agency said the bank should not be rated higher than the country’s sovereign rating. It added that the bank’s risk profile remains highly correlated to the Italian economy and that the coronavirus pandemic poses a challenge for the bank with tougher economic conditions expected not just in Italy but in its other markets too. Fitch also downgraded Intesa Sanpaolo’s (IntesaSP) and Mediobanca’s Long Term IDR to BBB- from BBB, and Unione di Banche Italiane’s Long Term IDR to BB+ from BBB-. 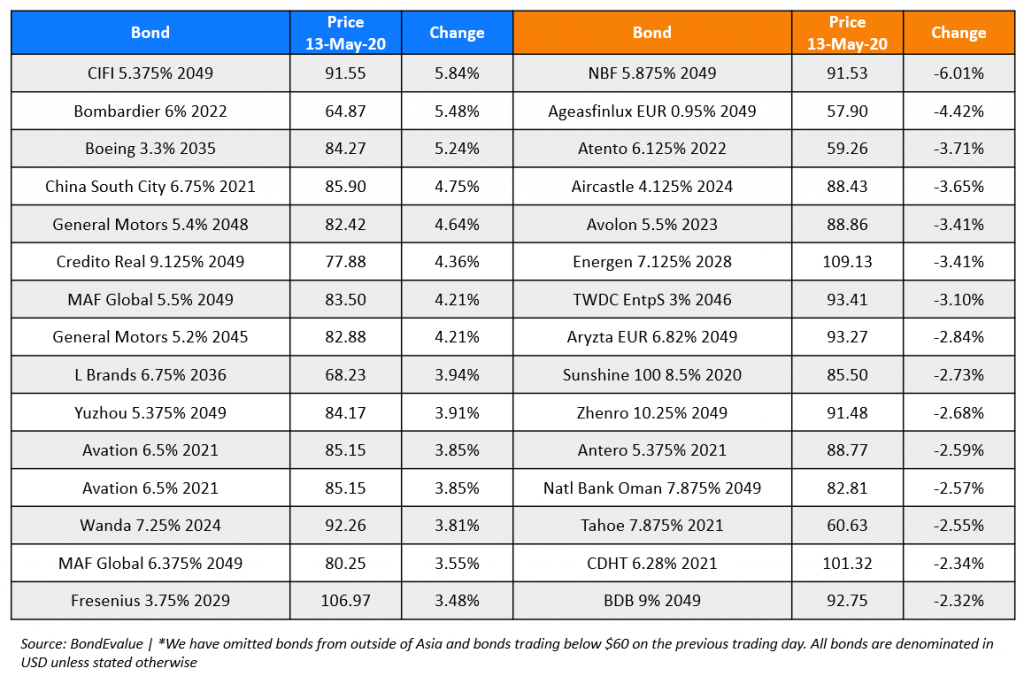