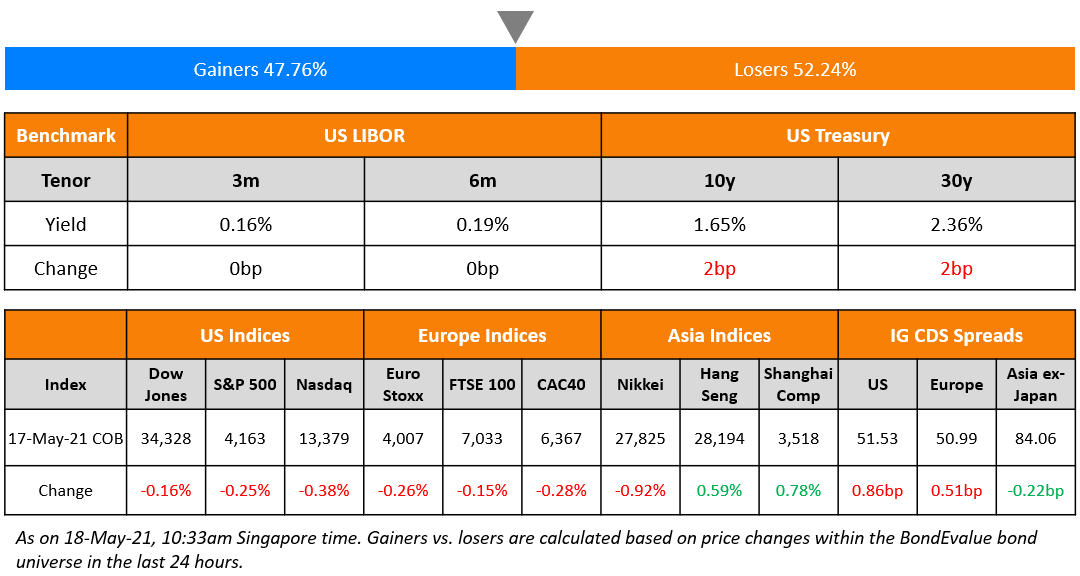 US markets snapped a two-day rising streak as investors weighed the risks of possible inflation and a rise in Covid-19 cases around the world. S&P and Nasdaq fell by 0.3% and 0.4% respectively led by the technology and communication stocks. Apple was down 0.9%, Microsoft was down 1.2% and Tesla down 2.2%. The NY Fed’s Empire Manufacturing release came lower at 24.3 for May vs. 26.3 last month – within the reading, new orders rose while inflationary pressures were seen in the prices paid index at 83.5, the highest since the surveys began in 2001. Vice Chair Richard H. Clarida opined that the US economy would take time to recover from the pandemic based on the lower than expected addition of 266k jobs in April. European equity indices were also modestly lower with the FTSE, DAX and CAC slipping 0.2%, 0.1% and 0.3%. US 10Y Treasury yields were flat at 1.65% and US IG CDS spreads were 0.9bp wider and HY spreads were 5.8bp wider. EU main spreads were 0.5bp wider and crossover spreads widened 1.9bp. Asian equities have opened ~1% higher and Asia ex-Japan CDS spreads tightened 0.2bp. 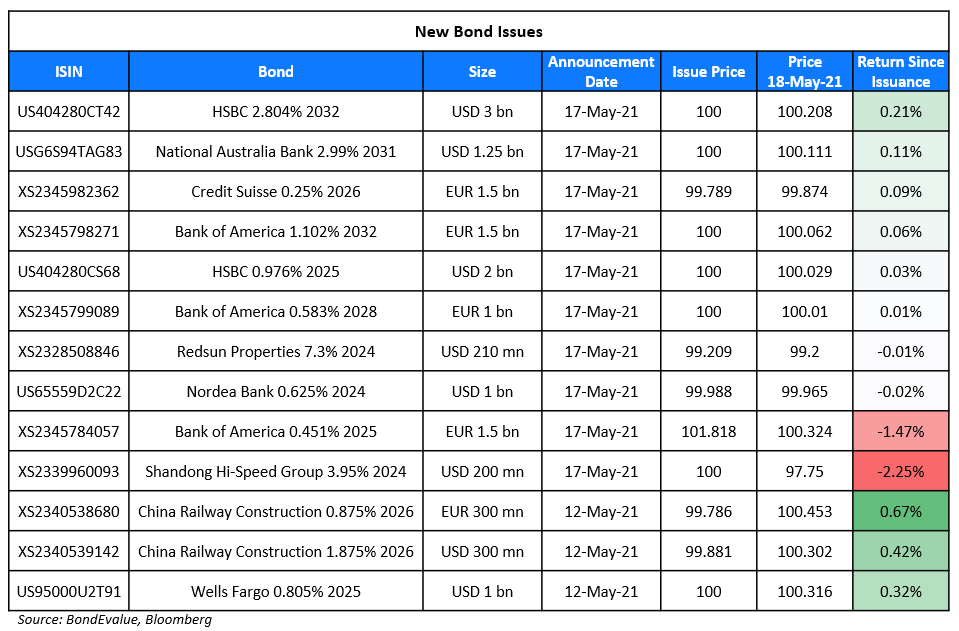 Bank of America raised €4bn via a three-trancher. It raised:

National Australia Bank (NAB) raised $1.25bn via a 10Y tier 2 bond at a yield of 2.99%, 25bp inside initial guidance of T+160bp area. The bonds have expected ratings of Baa1/BBB+/A- with proceeds going towards general corporate purposes.

Nordea Bank raised $1bn via a 3Y bond at a yield of 0.629%, 20bp inside initial guidance of T+50bp area. The bonds have expected ratings of Aa3/AA-/AA with proceeds going towards general corporate purposes.

Shandong Hi-Speed Group raised $200mn via a 3Y bond at a yield of 3.95%, 20bp inside initial guidance of 4.15% area. The bonds have expected ratings of Baa2/BBB+ and received orders over $940mn, 4.7x issue size. The bonds will be issued by Coastal Emerald and guaranteed by China Shandong Hi-Speed Financial Group, which is rated BBB+ (Fitch). The bonds also have a keepwell and liquidity support deed and a deed of equity interest purchase undertaking (EIPU) provided by Shandong Hi-Speed Group. Proceeds will be used for offshore debt refinancing.

Redsun Properties raised $210mn via a 3Y non-call 2Y (3NC2) green bond at a yield of 7.6%, 40bp inside initial guidance of 8% area. The bonds have expected ratings of B3/B+/BB and received orders over $1.8bn, 8.6x issue size. Asia took 99% and EMEA 1%. Fund/ asset managers received 75%, banks and financial institutions 17%, and private banks 8%. Proceeds will be used for offshore debt refinancing and to finance or refinance eligible green projects.

A Reverse Morris Trust transaction is a form of corporate action employed by US companies to avoid incurring tax obligations on gains arising from the disposal of assets. It involves: (1) A parent company spinning off a subsidiary, (2) The parent transferring unwanted assets to that subsidiary, (3) Forming a new company via a merger of the subsidiary with a third-party, (4) The new company issuing at least 50.1% of its voting stock to shareholders of the original parent company. Thus effectively, the parent can sell unwanted assets tax-free via a Reverse Morris Trust transaction, which offers the combined benefits of mergers and spin-offs.
AT&T announced on Monday that it will be merging its WarnerMedia asset with Discovery via a Reverse Morris Trust deal.

On US recovery could be ‘unprecedented’ – Richard Clarida, Fed Vice Chair
“We’re still more than eight million jobs short of where we were 14 months ago, so there’s still a deep hole in the in the labor market. But I also believe that it may take more time to reopen a $20 trillion economy than it did to shut it down,” Clarida said. “This was an unprecedented shock, it led to an unprecedented collapse, and we may have an unprecedented recovery,” Clarida said. “Our baseline view is that achieving maximum employment will not put unwanted or unwelcome upward pressure on the price level,” he said.
On Italy leading euro zone bond selloff on ECB unease, politics
Christoph Rieger, Commerzbank rates strategist
“The euro zone government bond market is generally in bad shape, especially for longer-dated pick-up paper, with France and SSAs (Sovereign Supranational Agency bonds) suffering as well, and Bunds,” said Rieger. “Talk of less ECB buying certainly fits the picture. And perhaps the Salvini headlines over the weekend also added to the widening today as investors are getting nervous about what happens after 2023 if fiscal front-loading is not paying higher growth dividends in coming years.”
Althea Spinozzi, Saxo Bank strategist
“Peripheral bond yields are so low, they would be the first to re-price if there’s concern about ECB tapering or rate hikes,” Spinozzi said.

Jan Dehn, head of research at asset manager Ashmore Group
“It is clear that Chileans want to make a decisive break with the Pinochet era constitution, which is a great idea, but it is not quite clear where Chileans want to go,” said Dehn. “The only thing that looks likely is that Chile will have a larger welfare state. Chile can afford this.”
In a note by Diego Pereira of JPMorgan
“Punishment to traditional politics, independents heterogeneity, and extreme-left edge over moderates suggest a regime of heightened uncertainty ahead,” Pereira wrote.
On EU drawing curtain on first act in pandemic bond-sale splurge
Martin van Vliet, a strategist at Robeco
“The first few EU SURE syndications were a smashing success in terms of demand,” said . “There will be structural demand for triple AAA paper such as the EU, so the recovery fund issuance will be digested, but we’re not sure demand will be as astronomical.”
Christoph Rieger, head of fixed-rate strategy at Commerzbank
“Over the last couple of weeks things have definitely turned more challenging,” said Rieger. “Lower ECB buying may require somewhat higher premiums.” 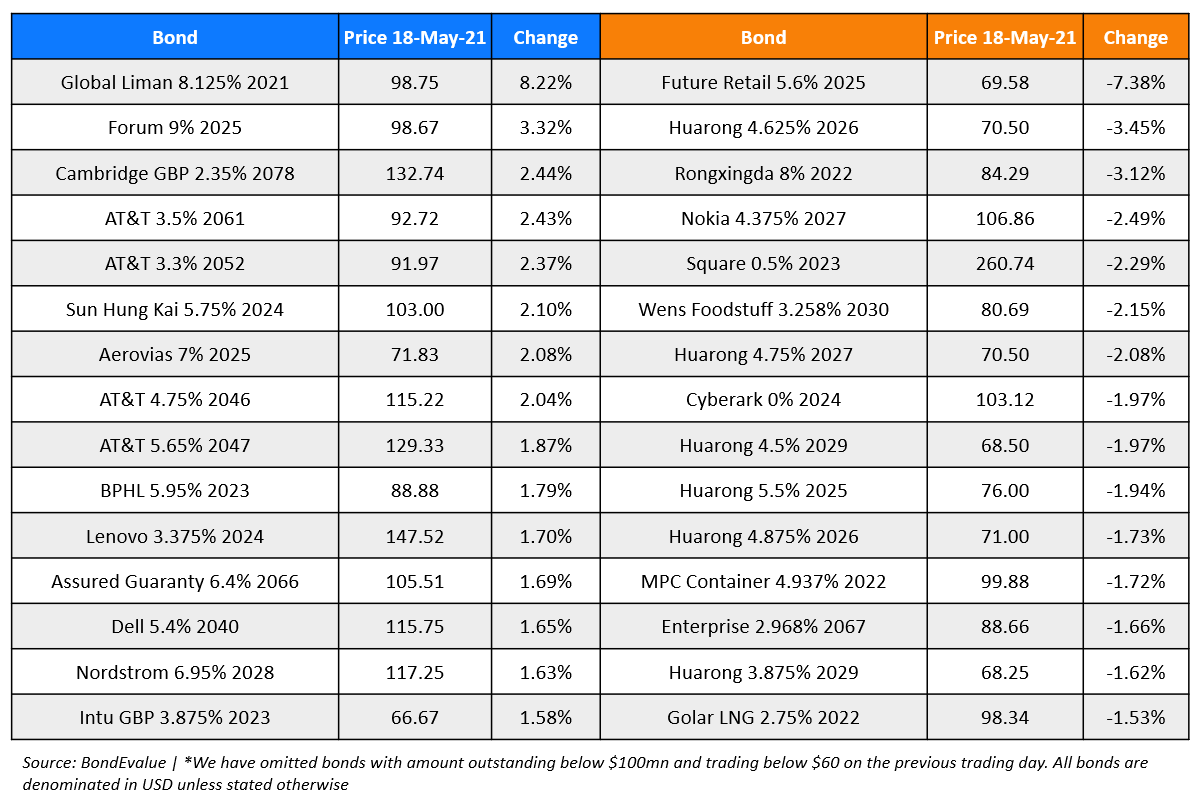