US equity and bond markets were shut for Martin Luther King Day on Monday while European equities traded in a narrow range with DAX up 0.4%, CAC up 0.1% while FTSE fell 0.2%. US 10Y and 30Y Treasury yields are 3bp higher today. Italian PM Giuseppe Conte won a confidence vote in the Chamber of Deputies yesterday and faces a Senate vote today where the government only has a small majority. 10Y Italian BTP yields were up 2bp while German Bund yields were also 2bp higher. EU main and crossover CDS spreads were 0.3bp and 0.1bp wider. China released some upbeat data as GDP rose 6.5% in 4Q2020, beating expectations of a 6.2% rise; industrial production was up 7.3% vs. 6.9% expected although retail sales were up only 4.6% vs 5.5% expected. Asia ex-Japan CDS spreads were 1.8bp wider and Asian equities have opened higher with KOSPI and HK up over 2%, STI up 0.4% while Indonesia is down over 1%.

Sign up for the first session in a series of five masterclasses, A Practical Introduction to Bonds taking place later today. The sessions are carefully curated for private bond investors, wealth managers and industry professionals and will be conducted by debt capital market bankers who have previously worked at premier global banks such as Credit Suisse, Citi and Standard Chartered. Click on the image below to register. 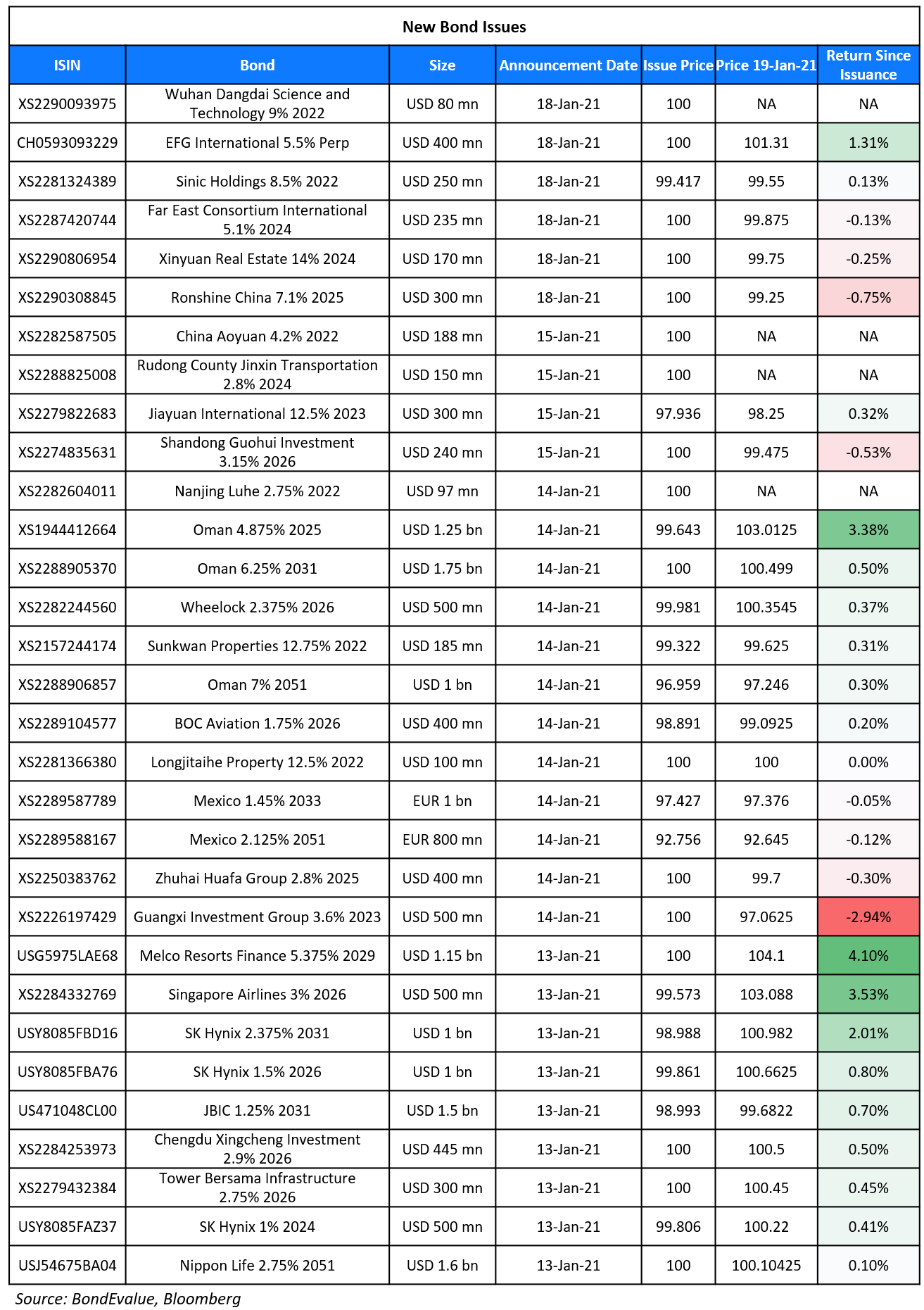 Ronshine China raised $300mn via a 4Y non-call 2Y (4NC2) bond at a yield of 7.1%, 35bp inside initial guidance of 7.45% area. The bonds have expected ratings of B2/BB-, and received orders over $1.7bn, ~5.7x issue size. The Hong Kong listed real estate company plans to use the proceeds for debt refinancing.

Far East Consortium Intl raised $235mn via a 3Y bond at a yield of 5.1%, 27.5bp inside initial guidance of 5.375% area. The bonds are unrated and received orders over $685mn, ~2.9x issue size. FEC Finance is the issuer and the Hong Kong-listed property developer is the guarantor. The bonds will be issued off a $2bn medium term note (MTN) programme. Far East Consortium International has property development, investment, hotel operations and gaming businesses. Proceeds will be used for refinancing, business development and general corporate purposes.

Sinic Holdings raised $250mn via a 364-day green note at a yield of 9.125%, 37.5bp inside initial guidance of 9.5% area. The bonds have expected ratings of B+/BB-, and received orders over $2bn, 8x issue size. Proceeds will be used in accordance with the green, social, sustainability financing framework of the company. Barclays and BNP Paribas are the green structuring advisers. Sinic has also launched a tender offer for its $280mn 11.75% 2021s with a cap equal to the new bond issuance amount. The purchase price is $1,010 plus accrued and unpaid interest for each $1,000 in principal and the deadline is January 25. The 11.75% 2021s currently trade at 100.6, yielding 7%.

EFG Intl raised $400mn via a perpetual non-call 7Y (PerpNC7) AT1 bond at a yield of 5.506%, ~49bp inside initial guidance of 6% area. The bonds have expected ratings of BBB-, and received orders over $4.7bn, 11.75x issue size. Proceeds will be used to fund a cash offer by its subsidiary EFG International (Guernsey) Ltd. for their $400mn subordinated Tier 2 bonds and the remainder to strengthen the regulatory capital base of EFG International Group. The bonds’ trigger event would occur if the CET1 Ratio of the issuer on a consolidated basis falls below 7% (currently at 17%) and upon the occurrence of a viability event.

Xinyuan Real Estate raised $170mn via a 3NP2 at a yield of 14%, unchanged from initial guidance of 14% area. The bonds have expected ratings of B-.  The investors’ put option is at par, puttable on January 25, 2023. Proceeds will be used for offshore debt refinancing, including purchases or redemption of outstanding notes, and for general corporate purposes.

2020 Bond Market Round Up – Sovereigns

A double dip recession is also known as a W-shaped recession, where the economy falls into a recession, then recovers with a short period of growth and then again falls into a recession before finally recovering to move higher. The FT noted that the Eurozone could go into a double dip recession as increased lockdowns stand to adversely impact travel, retail, hospitality, venues, workplaces as well as consumer confidence and spending since the year beginning besides fears of a wave of bankruptcies.

On the need for US to ‘act big’ on next coronavirus relief package – Janet Yellen, former Federal Reserve chair and US President-elect Joe Biden’s nominee to run the Treasury Department

“Neither the president-elect, nor I, propose this relief package without an appreciation for the country’s debt burden. But right now, with interest rates at historic lows, the smartest thing we can do is act big,” Yellen said. “I believe the benefits will far outweigh the costs, especially if we care about helping people who have been struggling for a very long time,” she said.

“It feels more like 2016,” said Cumbes. “Considering firm demand from investors and the issuers’ current perspective, it seems like things are lining up for a high volume market again this year.”

“The market is not talking about a 100-year bond from Italy but at this point in time why not?” she said. “There’s low reinvestment risk and investors can take extremely long duration and basically ride the ECB”

“Our discussion today reconfirmed the very strong consensus on the need to maintain a supportive budgetary stance,” Donohoe said. “Ministers also emphasised the importance of coordinating our efforts at euro area level and the core fact that we can achieve more collectively than individually.”

“We will need to pay great attention to imbalances stemming from the social impact of the crisis, which have not yet been fully felt. We must avoid a further deepening of the already worrying inequalities within our societies and between our countries,” Gentiloni said. “The Italian plan is broadly convergent with our general targets and policies but, as many other draft proposals, needs to be discussed and strengthened,” he said. “We have a very good basis, but we should strengthen it, not only for the Italian plan, but also for all the draft plans we are discussing now with member states.”

“We are skeptical,” said Papp. “Was that really a policy change or just a tactical move to relieve the market? We want to know. Some caution is warranted.”

“We are monitoring the situation very closely,” said Assalin. “We are now looking for more evidence that this either is a sustainable positive reform story or just more smoke and mirrors.”

“It is unlikely that the central bank would continue tightening liquidity indefinitely,” said Carter. “Although the recent monetary tightening is a welcome step, this is a short-term measure and the concerns over its external accounts should be addressed.”

“The Committee urges YPF to direct its efforts to improving the consideration offered in exchange for the Old 2021 Notes,” Noh wrote. “The members of the Committee will readily make themselves available to share their views on potential enhancements that can be made.”

“We view the proposed reduction in interest expense not as a necessity for the company’s survival but instead a means for the company to fund an increase in capex,” Halberstadt wrote. “While we understand the company is seeking alternative sources to put its growth plan back on track, we view this means by reducing cash interest payments to creditors as aggressive.”

“We think that is a good place to be in both financials and industrials,” Zahn said. “We will still see some volatility this year,” Zahn said. “It is an opportunity to take advantage of that and buy credit if we see spreads widening again.” 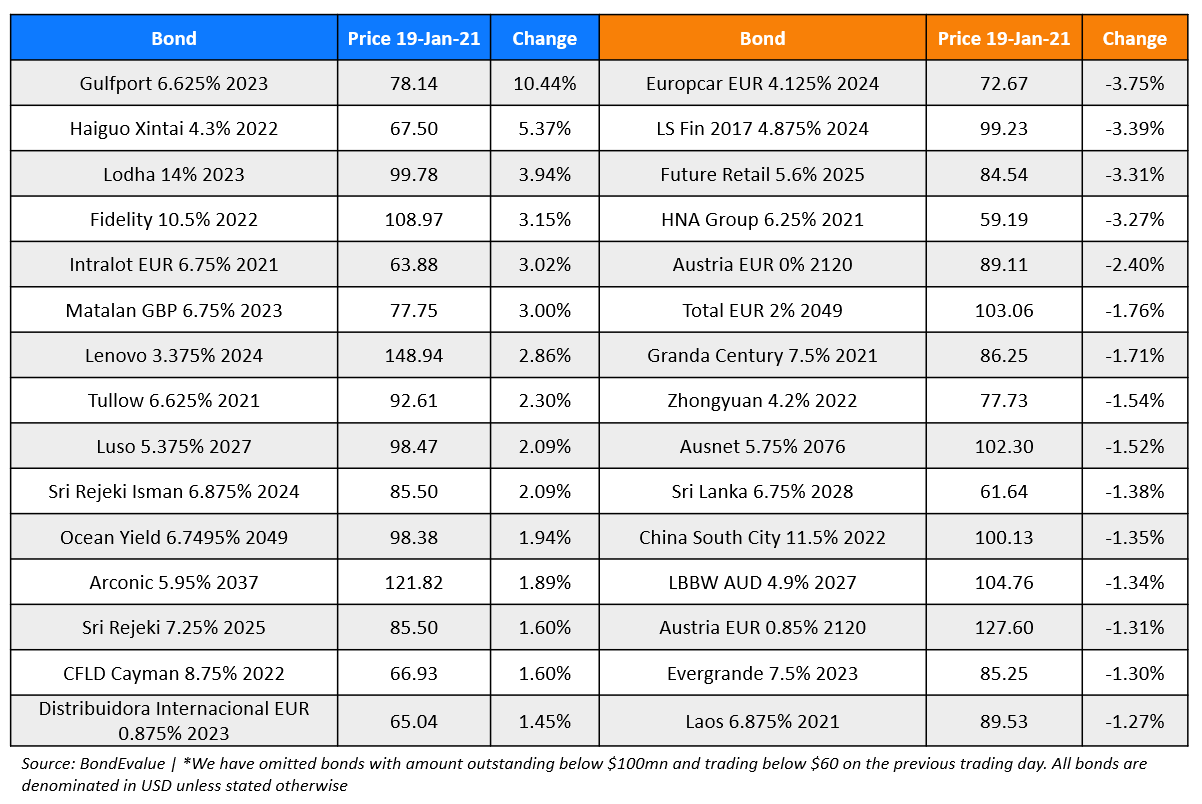