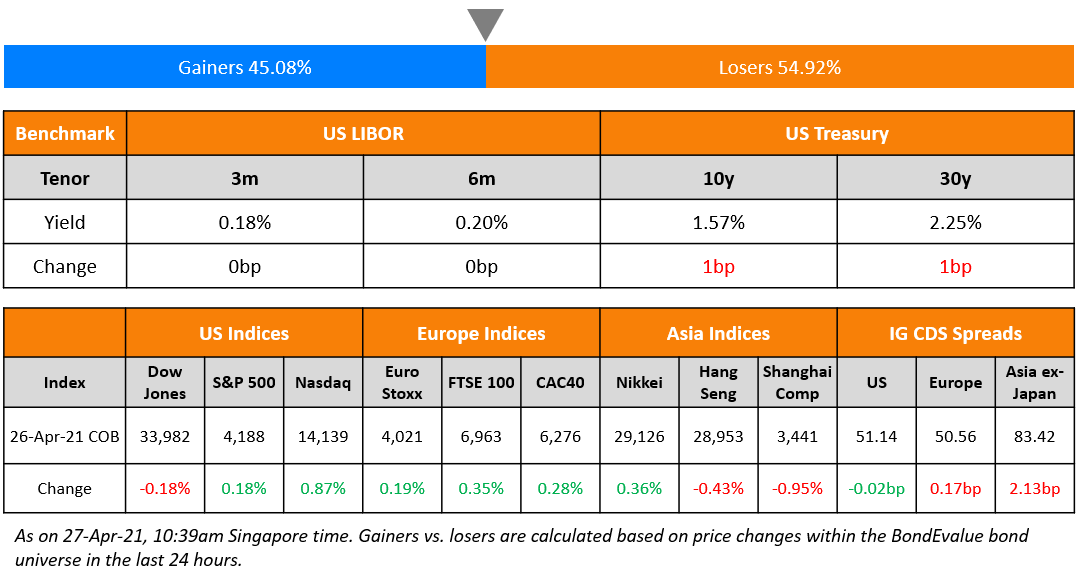 S&P and Nasdaq rose 0.2% and 0.9% to new closing highs with big tech names like Apple, Facebook, Microsoft and Alphabet to report earnings over the next three days after Tesla reported strong earnings yesterday (more details below). US 10Y Treasury yields were stable at 1.57%. Bloomberg reports that investors have pumped in $2bn and ~$660mn in Vanguard and Schwab’s short-dated Treasury Bond ETFs (VGSH and SCHO), a record for both funds as they move out of long-duration funds following the spike in yields earlier this year. 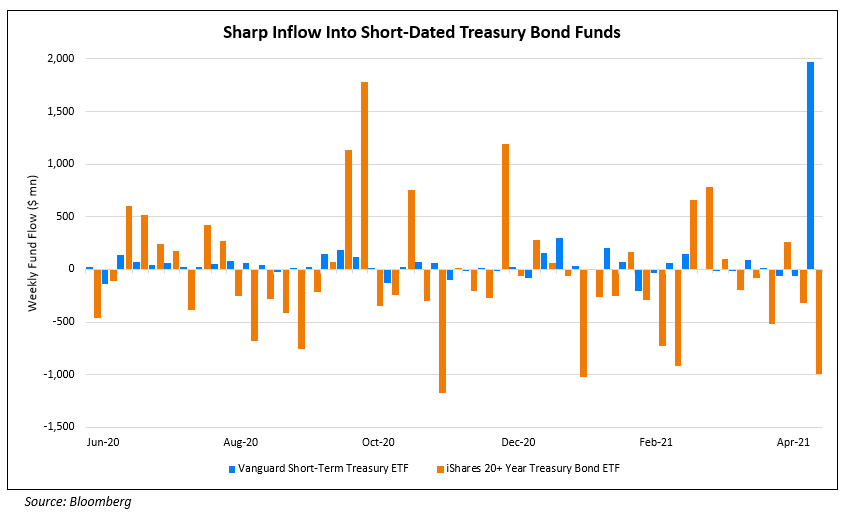 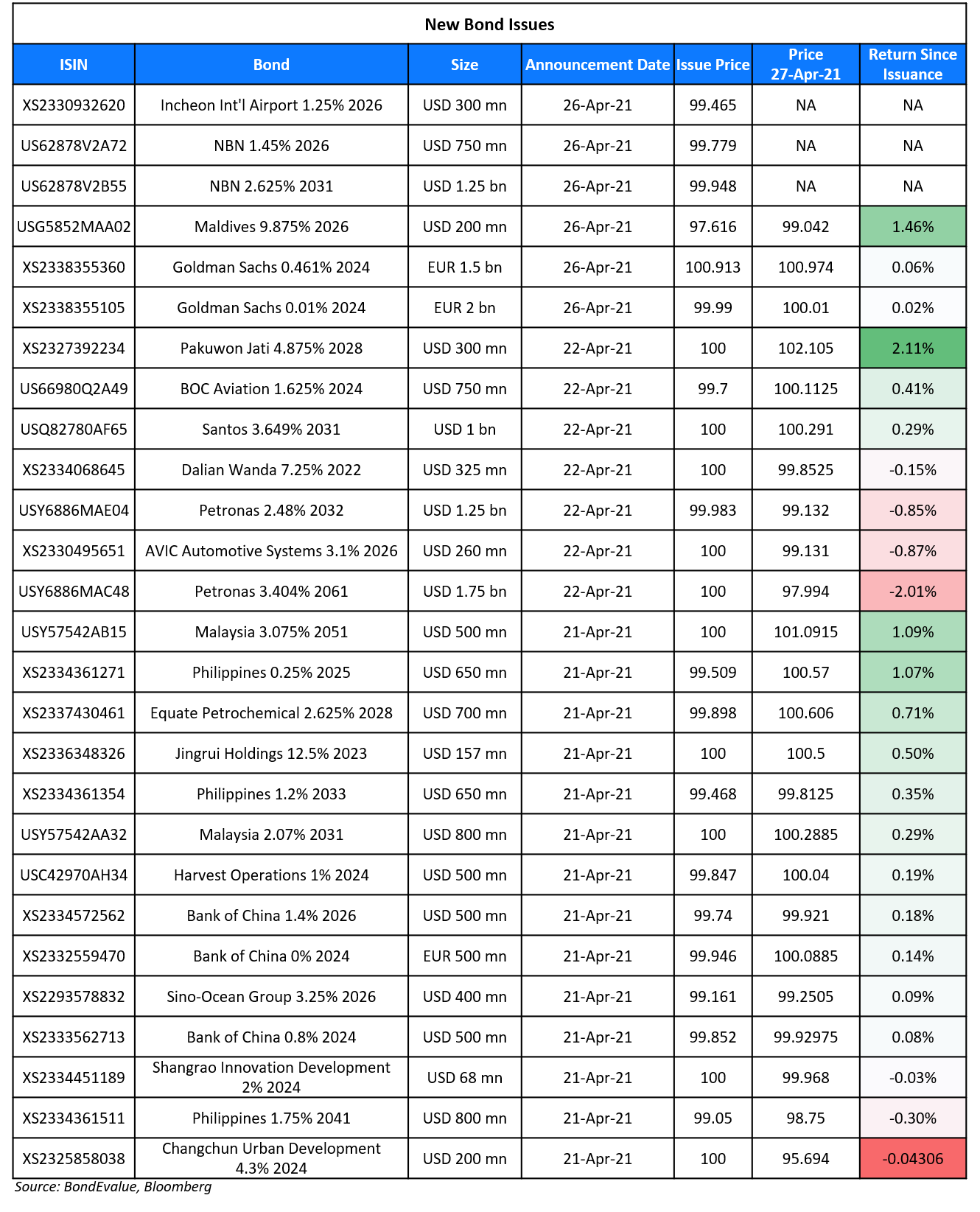 Maldives raised $100mn via a tap of their 9.875% 2023s Sukuk at a yield of 10.5%, unchanged from initial guidance of 10.5%. The bonds have expected ratings of B3. Maldives Sukuk Issuance, rated B3/CCC is the issuer and the Ministry of Finance on behalf of the Maldives government is the obligor.

Incheon Int’l Airport raised $300mn via a 5Y green bond at a yield of 1.361%, 27.5bp inside initial guidance of T+85bp area. The bonds have expected ratings of Aa2/AA, and received orders over $1.5bn, 5x issue size. Proceeds will be used for financing and/or refinancing eligible green projects under the company’s sustainability finance framework.

A guaranteed bond is a type of bond that has a guarantee wherein interest and principal payments will be made by a third party if the issuer defaults. The third party/guarantor could be the parent company or a JV, an insurance company, government based entity etc. Since the bond is guaranteed, the risks in investing in the bond are lower vs. non-guaranteed bonds and thus generally offer lower yields. From the issuer’s perspective, this also eases the cost of raising debt, though it is partially offset by paying some premiums to the guarantor.
Hyundai Motor Manufacturing today has launched a dollar 5Y guaranteed bond with Korea’s Hyundai Motor Company as the guarantor.

On the Fed to announce bond taper in fourth quarter
Gero Jung, chief economist at Mirabaud Asset Management
“We think this is too early, given the insistence of the Fed to focus on ‘hard’ economic data and not expectations for improvement,” said Jung. “In our view, the Fed wants to see a sequence of very positive data — like the March jobs numbers — before starting to initiate a tapering process.”
Lynn Reaser, economist at Point Loma Nazarene University
“The Fed is turning increasingly bullish on the economy, but it still views any thoughts of hinting at a future tightening as premature,” Reaser said.
Scott Brown, chief economist at Raymond James Financial Inc
“The Fed’s revised monetary policy framework, unveiled last summer, is significantly different from the past, where the Fed would tighten policy preemptively to head off inflation,” said Brown.
Joel Naroff, president of Naroff Economics
“The Fed could raise rates sooner than expected if a major infrastructure bill is passed,” said Naroff. “That would secure solid growth well past the time the stimulus runs out and make it unnecessary to keep rates so low.”
On investors shoring up defences against rapid rises in US inflation – David Riley, chief investment strategist at ‎BlueBay Asset Management
“It’s not that the market has become inflationist. It’s that the market is uncertain,” said Riley. “If the market was really pricing inflation being sustained above the Fed target through next year and beyond, I think [yields] would be meaningfully higher,” he said.
On US bank appetite for Treasuries unfazed after Fed ends regulatory relief
Dan Krieter, interest rates strategist at BMO Capital
“When we were all talking about the SLR [supplementary leverage ratio] a couple of months ago, we were worried that the exemptions will expire… and banks would sell Treasuries, but the SLR (exemption) went away, and we didn’t really see significant selling pressure,” said Krieter. “The Fed has also hinted heavily at a permanent tweak to SLR calculations that likely prevented any large selling of Treasuries,” Krieter said. “Funding a portfolio of bank reserves and Treasuries with unsecured bank debt is likely a negative arbitrage proposition,” said Krieter.
“Interest on reserves don’t earn much and they earn less than what you’re paying for the debt that funds it.” “To maintain a certain SLR, you might sell Treasuries and then presumably buy them back at a higher market price once the permanent exemption comes,” Krieter said. “In this example, you’re paying the full bid/ask spread on a Treasury portfolio worth tens of billions of dollars.”
Patrick Leary, chief market strategist and senior trader at broker-dealer Incapital
“From my understanding, there weren’t many banks that have been using the SLR exemption on their Treasury holdings anyway,” said Leary.

“The government may continue to have a high incentive to provide extraordinary support, considering China Huarong’s policy role and the potential contagion risk for the refinancing of similar policy-driven GREs, but Fitch believes timely indication of support has not yet materialized.” There is “increasing uncertainty over the company’s liquidity, particularly its offshore funding,” Fitch added.
On China’s embattled Huarong to delay earnings results again as auditors need more time – in a report by ANZ Research
“If the ‘distressed-asset’manager becomes itself distressed, it is reasonable to cast doubt on the vulnerability of the financial system,” ANZ Research said.
On Brazil at risk of steeper rate hikes – Gustavo Loyola, managing partner at Tendencias Consultoria and former Brazil central bank chief
“They’re in a difficult position,” Loyola. “They’re waiting to see what the scenario will bring, if this pace of tightening is enough to anchor inflation expectations.” “That doesn’t spell anything good for Brazil, as we know both are incapable of managing” the country, he said. “Brazil needs to reinvent itself politically to win over investors.” 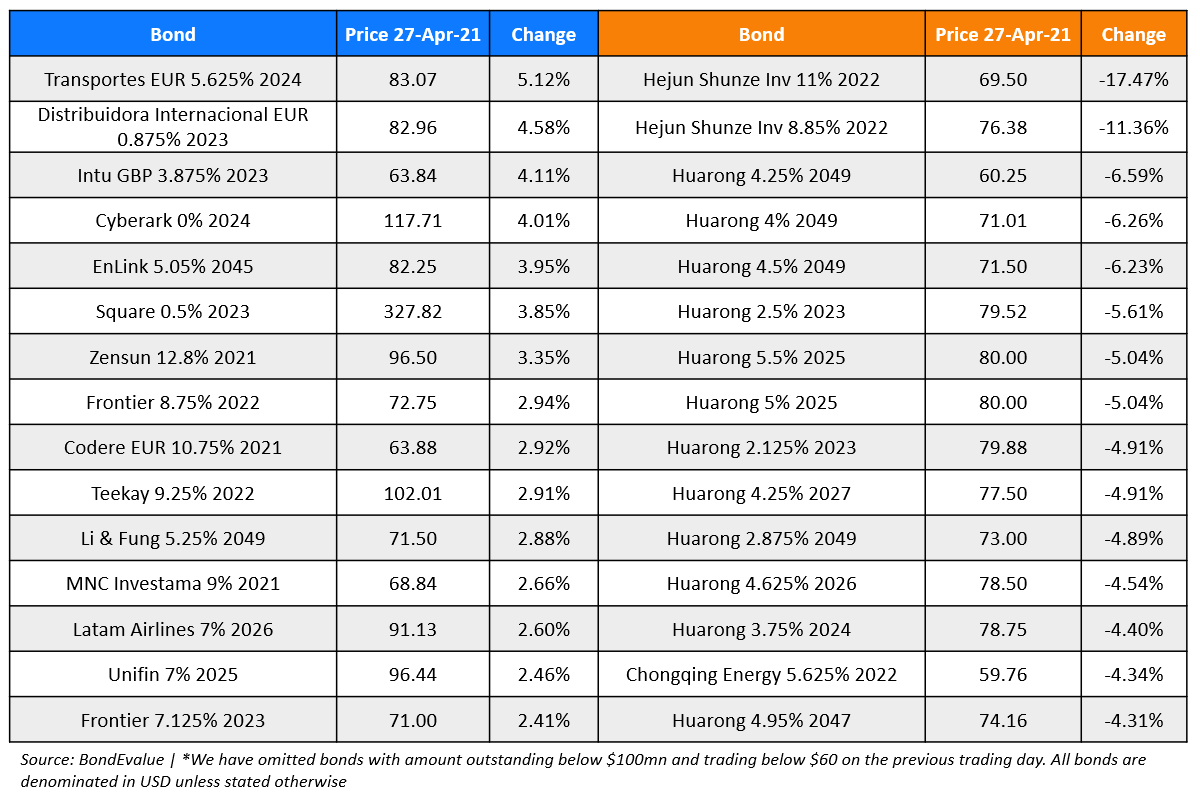