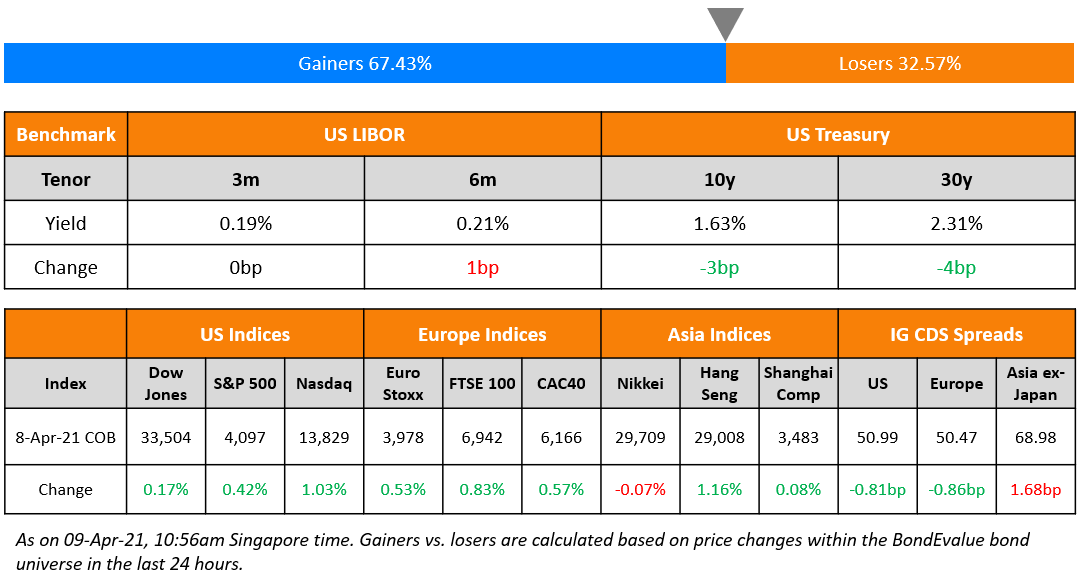 S&P closed at a record high, up 0.4% and Nasdaq closed 1% higher. US 10Y Treasury yields eased 3bp to 1.63% after Fed Chair Powell’s dovish (Term of the day, explained below) comments downplaying inflation, while jobless claims for the previous week climbed 16k to 744k. In Europe, the DAX and CAC were higher by 0.2% and 0.6% while FTSE rallied 0.9% adding to marking three successive days of gains of ~1%. US IG CDS spreads were 0.8bp tighter and HY was 2.5bp tighter. EU main CDS spreads were 0.9bp tighter and crossover spreads tightened 4bp. Asian equity markets are mixed with China and HK down 1% and others up 0.2% while Asia ex-Japan CDS spreads were 1.7bp wider. 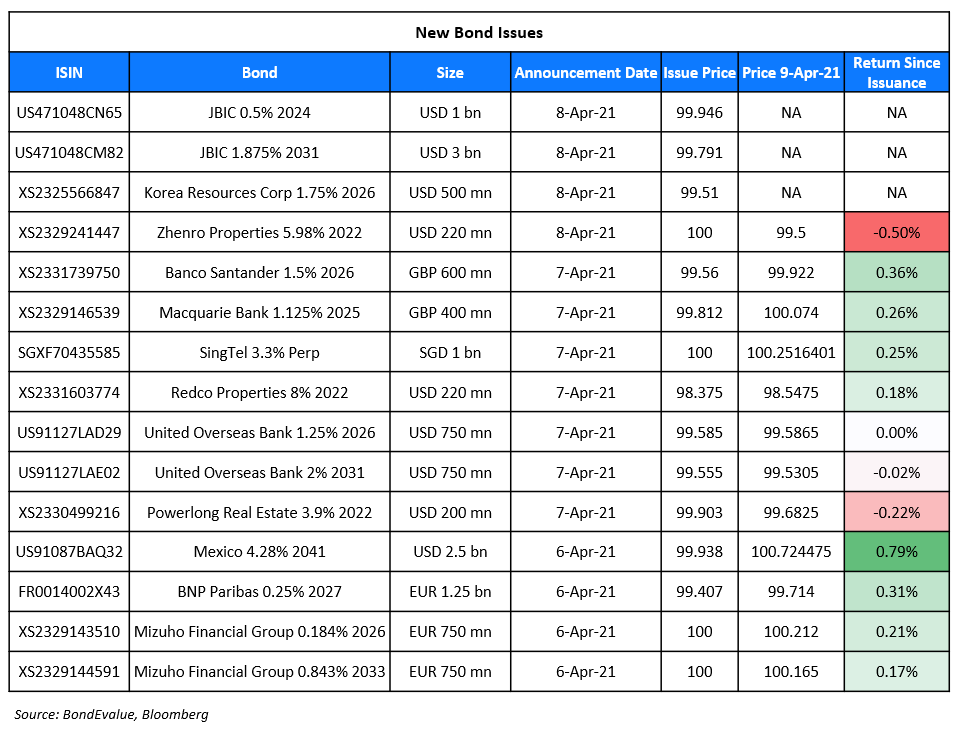 Zhenro Properties raised $220mn via a 363-day note at a yield of 5.98%, 22bp inside initial guidance of 6.2% area. The bonds have expected ratings of B+, and received orders over $800mn, 3.6x issue size. Asian received 91% of the bonds and EMEA 9%. Fund managers and financial institutions were allocated 73% and private banks 27%. The Chinese real estate company plans to use the proceeds for debt refinancing and to fund projects in accordance with its green bond framework.

Korea Resources Corp (Kores) raised $500mn via a 5Y bond at a yield of 1.853%, or T+100bp, 30bp inside initial guidance of T+130bp area. The bonds have expected ratings of A1/A, and received orders over $1.5bn, 3x issue size. Asia took 56% and EMEA 44%. Asset/fund managers received 52%, banks 22%, insurance companies 14% central banks/sovereign wealth funds 11% and private banks 1%. There is a change of control put at 100 if the Korean government ceases to own and control at least 51% of the issuer. The state-owned energy and natural resources company plans to use the proceeds for general corporate purposes.

A dovish stance is a central banking policy stance which is accommodative, in favor of maintaining interest rates at low levels and generally not worried about inflation. This stance is generally taken to ease financial conditions from the monetary policy side to stimulate the economy. Reuters reported that US Treasury yield fell with fresh dovish comments from Federal Reserve Chair Jerome Powell who said that while price may go up, inflation may not.

On US yields falling after Fed Chair Powell’s dovish comments, jobless claims
Ellis Phifer, managing director in fixed income research at Raymond James
“The market has been expecting the Fed to waver a bit on its dovishness given that the acceleration in rates has been pretty quick. But the Fed hasn’t wavered on that,” said Phifer. “Some Fed members have flinched a little bit, but overall the doves continue to be in control,” he added.
Stan Shipley, fixed income strategist, at Evercore ISI
“Falling incidence of the coronavirus will lower initial claims,” said Shipley. He added that overall the data showed the “labor market is continuing to heal and should be neutral for Treasury yields.”
Tom di Galoma, managing director at Seaport Global Holdings
“In my view, 10-year yields could easily trade back to 1.75% next week,” he added.
On Treasury yields retreating slightly after jobless claims rise unexpectedly – Sarah Hewin, head of research for Europe and Americas at Standard Chartered Bank
“So I think they, to a large extent, are factoring in some very hefty payroll numbers over the coming months,” she said, but added that the uncertainty was as to “how far the current strength in the economy persists.”
On IMF seeing uncertainty around Argentina’s economic policies – Alejandro Werner, IMF’s head for the Western Hemisphere
“There’s always at least two legs to any restructuring. One is how you change the terms of your debt contracts, the other one is how you change your policies to make the new debt sustainable. And I think that second leg is where we have a lot of uncertainty,” said Werner. “We’re working to be ready whenever the government actually wants to finalize it and to accelerate it. I think we’re in a position to do it, but it’s true that, it is obvious that the negotiations have dragged on more than maybe what we thought… to be ready in the first half of this year,” Werner said. “There seems to be significant differences of opinion within President Fernandez’s political allies on in which direction they should go, both policy wise, and also vis-à-vis the negotiations with the Fund,” he said.

Patrick Esteruelas, head of research at Emso Asset Management
“The glass-half-full read is that Mexico did not engage in any of the aggressive fiscal loosening policies that its neighbors did,” said Esteruelas.
Elizabeth Johnson, managing director of Brazil research at TS Lombard
“Bolsonaro has lost the support of much of the business community, the bulk of the population and part of the top brass of the military,” Johnson said.
Ricardo Adrogue, head of global sovereign debt and currencies at Barings
“Brazil’s politics are messy and its communication is poor, but the rules still work and the government can maintain control of the path,” said Adrogue. “There is budget to increase social protection, and the deficit won’t be explosive.” “The rest is just noise,” he added, “and maybe a great investment opportunity.” 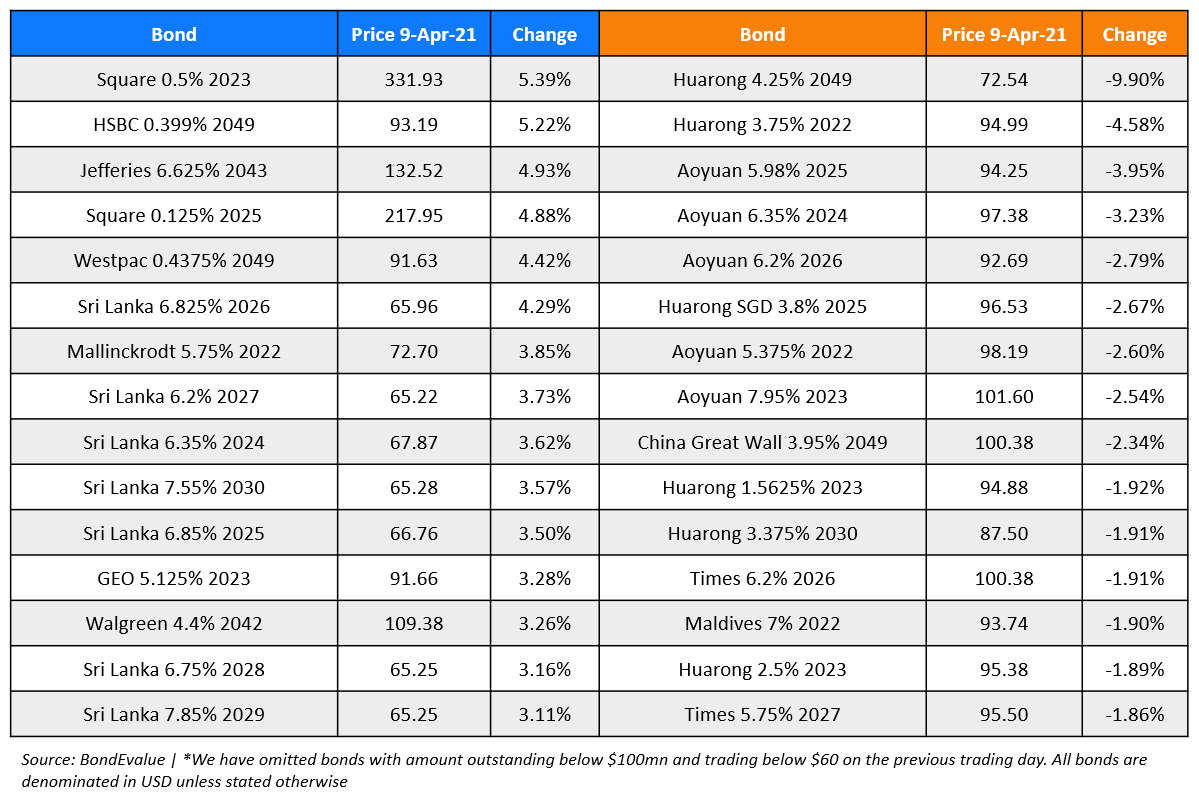