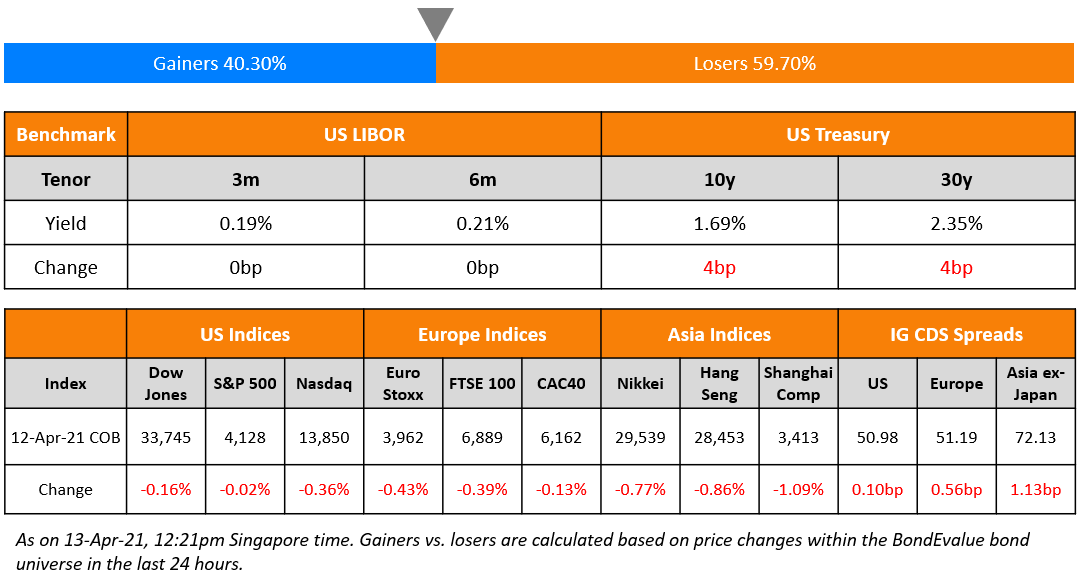 S&P ended flat while Nasdaq was down 0.4% as markets traded in a narrow range. US 10Y Treasury yields were 4bp wider at 1.69%. US March CPI is due today and analysts are interested in seeing how much the increased producer prices in March may feed through the inflation data. European equities were slightly lower as DAX and CAC fell 0.1% and FTSE was down 0.4%. US IG CDS spreads were 0.1bp wider and HY was 1.7bp wider. EU main CDS spreads were 0.6bp wider and crossover spreads widened 2.7bp. Asian equity markets are higher by 0.5% and Asia ex-Japan CDS spreads were 1.1bp wider. 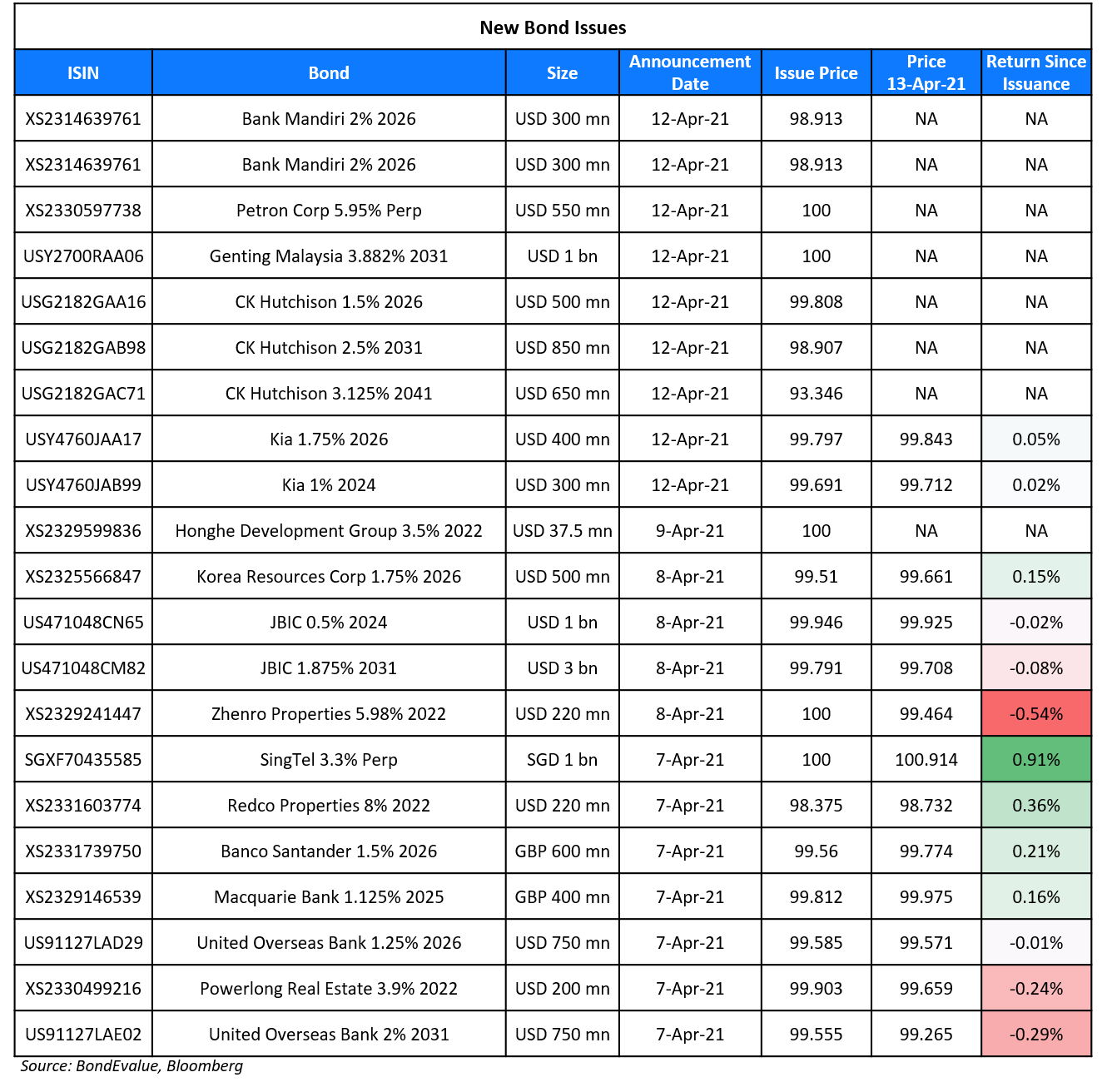 Hong Kong based conglomerate CK Hutchison raised $2bn via a three-trancher. It raised:

The bonds have expected ratings of A2/A/A-. Proceeds will be used for debt refinancing and general corporate purposes. The notes will be issued by CK Hutchison International (21). Hong Kong-listed CK Hutchison Holdings is the guarantor. The bonds carry a 1/3/6 month par call for the 5/10/20Y bonds respectively. The new 10Y and 20Y bonds priced inside its existing dollar bond curve given that its older 2.5% 2030s and 3.375% 2050s are currently yielding 2.54% and 3.26% respectively, wider than the new bonds despite the shorter tenor.

Bank Mandiri raised $300mn via a 5Y sustainability bond at a yield of 2.231%, 40bp inside initial guidance of T+175bp area. The bonds have expected ratings of Baa2/BBB- and received orders over $2.5bn, 8.3x issue size. Asia took 85% of the notes and EMEA 15%. Fund managers were allocated 74%, sovereign wealth funds 12%, insurers and pension funds 6%, bank treasury 6% and private banks and others 2%. The bank is currently 60%-owned by the government via Indonesia’s Ministry of State-Owned Enterprises. There is a change of control put at 101 if the Indonesian government ceases to directly or indirectly own and control more than 51% of the issuer and there is a rating downgrade. Proceeds will be used to finance or refinance, in eligible sustainability bond projects aligned to prescribed eligibility criteria under the bank’s sustainability bond framework.

Petron raised $550mn via a senior PerpNC5 at a yield of 5.95%, 35bp inside initial guidance of 6.3% area. The bonds are unrated and received orders over $1.9bn, 3.4x issue size. Asia took 90% and EMEA 10%. Fund/asset managers booked 57%, bank treasuries 37%, and private banks, corporates and others 6%. The coupon resets in the fifth year and every five years thereafter to the prevailing US Treasury yield plus the initial spread of 507.4bp. If there is a change of control event, the issuer can choose either to redeem the securities at 101or have a coupon step-up by 250bp. There is a dividend stopper and a pusher. Proceeds will be used for repayment of debt and general corporate purposes.

Genting Malaysia raised $1bn via a 10Y at a yield of 3.882%, 40bp inside initial guidance of T+260bp area. The bonds have expected ratings of BBB/BBB and received orders over $2bn, 2x issue size. US investors took 44%, EMEA 32% and Asia 24%. Asset/fund managers were allocated 86%, insurers, pension funds and sovereign wealth funds 8% and banks and private banks 6%. Proceeds will be used for refinancing, capital investments and working capital.

Metallurgical Corporation of China raised $500mn via a senior PerpNC3 at a yield of 2.95%, 35bp inside initial guidance of 3.3% area. The bonds have expected ratings of Baa1, and received orders over $1.7bn, 3.4x issue size. APAC bought 99% and EMEA/offshore US 1%. Fund/asset managers and corporates received 46%, banks and financial institutions 27%, insurance and sovereign wealth funds 27%. The distribution rate will be reset at an initial spread of 259.5bp over the prevailing 3Y Treasury yield plus a 300bp step-up if the perps are not called on the first call date on April 20 2024. Proceeds will be used for refinancing and general corporate purposes.

Greenium is a term that refers to the premium that investors pay when buying green bonds vs. conventional non-green bonds. Green bonds that trade with a greenium indicate strong investor demand for those bonds, which pushes prices higher and yields lower compared to conventional bonds. FT wrote a story noting that governments and corporates raising money through green debt are benefiting from greenium with an example of the greenium in German Bunds growing over time.

We at BondEvalue did a quantitative study last year evaluating whether greenium exists by looking at several bond pairs (green vs. non-green). To read the report, click here

On the US Federal Reserve is monitoring the implosion of New York fund Archegos Capital – Jerome Powell, Federal Reserve Chairman
“This is an event that we’re monitoring very carefully and working with regulators here and around the world to understand carefully,” Powell said. “We’re going to understand that and get to the bottom of it. What we try to do is make sure that the banks understand the risks that they’re running and have systems in place to manage them. This would appear to be a significant shortfall – a failure on that front,” said Powell.
On 75% vaccination a necessary condition for the central bank to consider tapering its bond-buying program – James Bullard, Federal Reserve Bank of St. Louis President
“It’s too early to talk about changing monetary policy,” Bullard said. “We want to stay with our very easy monetary policy while we are still in the pandemic tunnel. If we get to the end of the tunnel, it will be time to start assessing where we want to go next.”
“When you start to get to 75% vaccinated, 80% vaccinated and CDC starts to give more hopeful messages that we are bringing this under better control and starts relaxing some of their guidelines, then I think the whole economy will gain confidence from that,” Bullard said. “Cases are up right now, that is a little bit concerning,” he added.
“I think there will be more inflation in 2021 than what we’ve seen in recent years, and I’d like some of that to flow through to inflation expectations,” he said.
On US economy likely to see significant rebound this year – Eric Rosengren, Boston Federal Reserve Bank President
“With labor-market slack still significant, and inflation still below the Federal Reserve’s 2 percent target, my perspective is that the current highly accommodative stance of monetary policy is appropriate,” Rosengren said. “We’re likely to be facing a tight labor market down the road,” he said.
On Euro zone bond yields falling as US Treasuries prepare for a key week – Rainer Guntermann, Commerzbank rates strategist
“The large U.S. Treasury supply and the string of likely upbeat U.S. activity and inflation data this week leave U.S. Treasuries still vulnerable with spillover risks to Bunds,” said Guntermann.
On China’s Ant Group to restructure under central bank agreement
Rocky Fan, economist at Sealand Securities Co
“If the government really wants to crack down on monopoly, you should not set your eye only on private companies and the platform economy.” “Now, if investors suffer poor returns, it would be bode ill for future entrepreneurship in the platform economy.”
Bo Pei, senior equity research analyst, Chinese internet at Oppenheimer & Co
“Yes I do think analysts and investors will feel more positive about the company now, with the uncertainties settled. But note that majority of analysts had ‘buy’ rating on the name so probably won’t see too many upgrades, but sentiment-wise is good. There is still some concerns around going after Jack Ma, but the fine last Friday cleared most of it.”
Hong Hao, head of research at Bocom International
“Today’s announcement is actually good news for Ant as it can help eliminate/remove some uncertainties around the fintech company and help it revive the cancelled IPO.” “While there’s now a bigger chance Ant can get its listing on track, the company’s valuation will be greatly lowered as it’s formally a financial company now not a tech firm, and the investors will be much soberer when they value Ant again.” 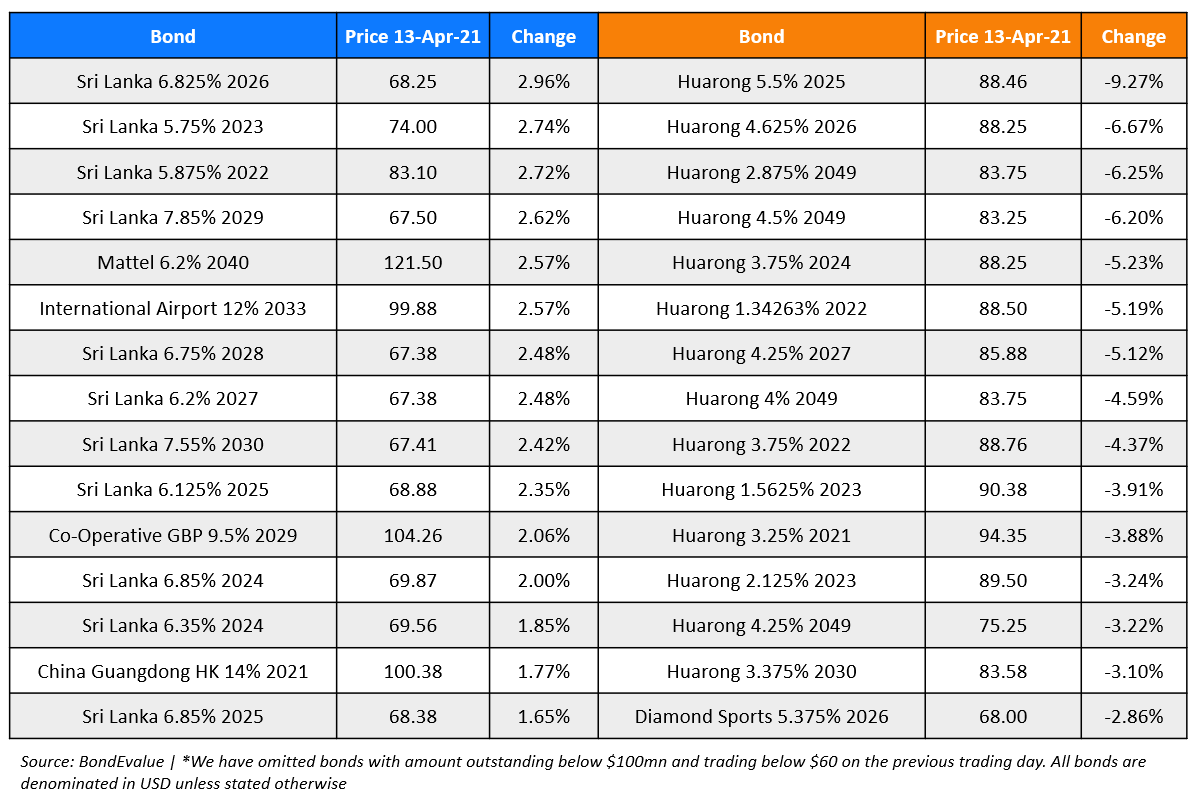