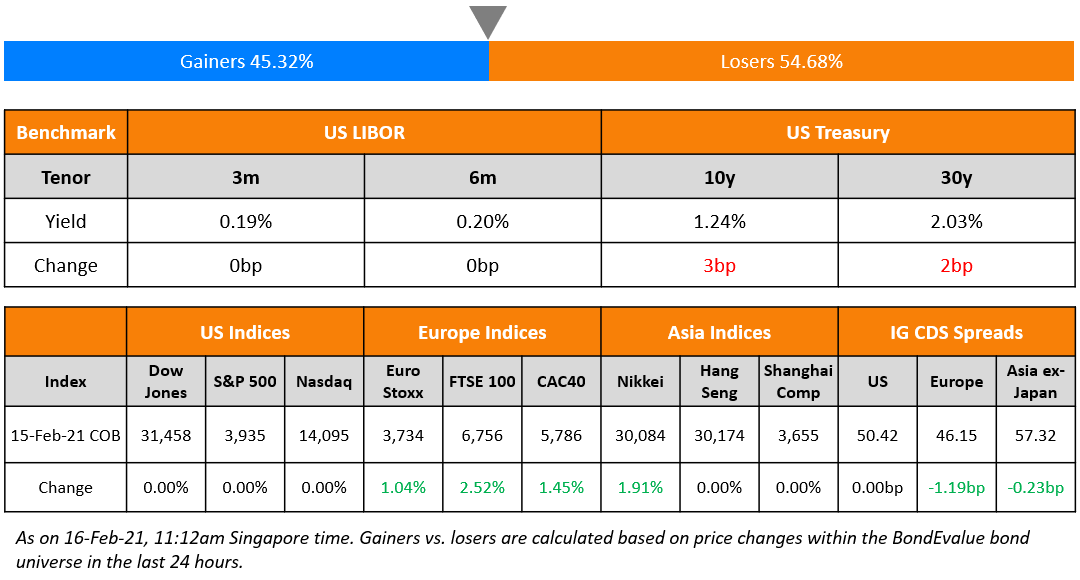 US equity markets were shut on Monday on account of President’s Day. US 10Y Treasury yields have moved another 4bp higher, currently at 1.25% with overall risk sentiment positive. WTI crossed $60/bbl, up 2.2%, the highest level in over a year and Brent also rallied 1.1% to $63.1/bbl on account of Middle East tensions after a Saudi-led coalition fighting in Yemen said it intercepted an explosive-laden drone fired by the Iran-aligned Houthi group and an Arctic freeze expected to extend till Texas, which is undergoing severe power outages amid heavy snowfall. European equities saw a strong rally with the CAC and FTSE up 1.5% and 2.5% while DAX moved 0.4% higher. German Bund yield also rose above -0.4%, the first time since September. EU main CDS spreads tightened 1.2bp and crossover spreads tightened 6bp. Asian primary markets continued to remain muted due to the Lunar New Year holidays and have opened with a positive bias today, up ~0.5% while Asia ex-Japan CDS spreads are 0.2bp tighter. 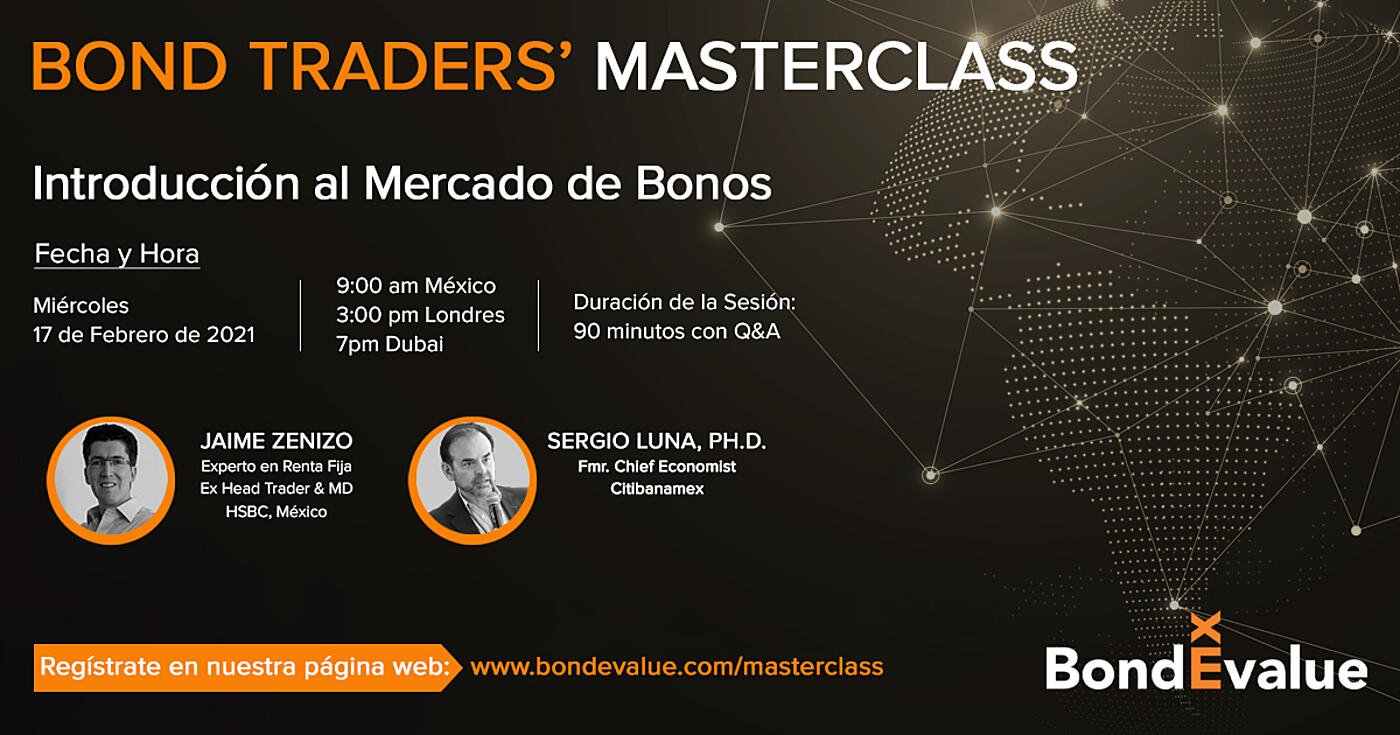 Option Adjusted Spread (OAS) refers to a measure of the credit spread of a bond with embedded options relative to a benchmark, similar to the z-spread. The key difference between OAS and z-spread lay in the optionality. When comparing two bonds – one with an embedded option and one without – OAS is a better measure compared to z-spread as the former adjusts for/removes the impact of optionality for a like-to-like comparison. Put simply, OAS ≈ Z-Spread + Option cost.

“The confluence of more fiscal support and the reopening of the economy hitting together around springtime is lifting the outlook for inflation and growth,” said Emons. “Rising breakevens and the steepening yield curve show that some people are trading already on the future economy — post the pandemic.”

While the CPI report “was a disappointment, it does not change our outlook and we do not expect it will change investors’ views about expected reflation,” Pond wrote. “The reflation theme is based on a story about where inflation will go once most are vaccinated and demand normalizes.”

Oleg Melentyev, an analyst at Bank of America

“Last year it was the strongest companies that reacted to unprecedented events by shoring up their balance sheets in case cash was needed,” said Melentyev. “Now we are deep at the bottom of the barrel in terms of the weakest and most fragile issuers finally being able to fund themselves in this market.”

Jerry Cudzil, head of credit trading at TCW
“The prudence that may have been there before is now non-existent,” said Cudzil. “In the near to medium term you will have a difficult time keeping up if you don’t buy some of this stuff. That doesn’t mean they are good deals. As a matter of fact, it’s a good way to lose money long term.”

“The way the market is viewing this right now is basically saying, if all these triple-Cs can access funding, they’re not going to default,” said Melentyev. The problem, he said, is investors are “hoping that this argument will work longer than it probably will.”

“We believe income investors should maintain exposure to high yield bonds in this environment. With the Fed on hold, interest rate volatility may remain at low levels. A sharp, unexpected rise in rates is certainly a risk investors must be aware of. Higher yields, however, can provide a cushion against rising rates, and higher growth is positive for spreads.”

“Since most GCC (Gulf Cooperation Council) sovereigns (apart from high-yield countries Bahrain and Oman) are investment-grade rated (they) do react relatively strongly on underlying development in U.S. and EU rates,” said Dergachev.

On yield on 10-year US Treasuries, “in my view, 1.25% is a critical level. Above that, highly rated issuers should suffer because of their tight spread and high correlation with risk-free yields,” said Bertoni. 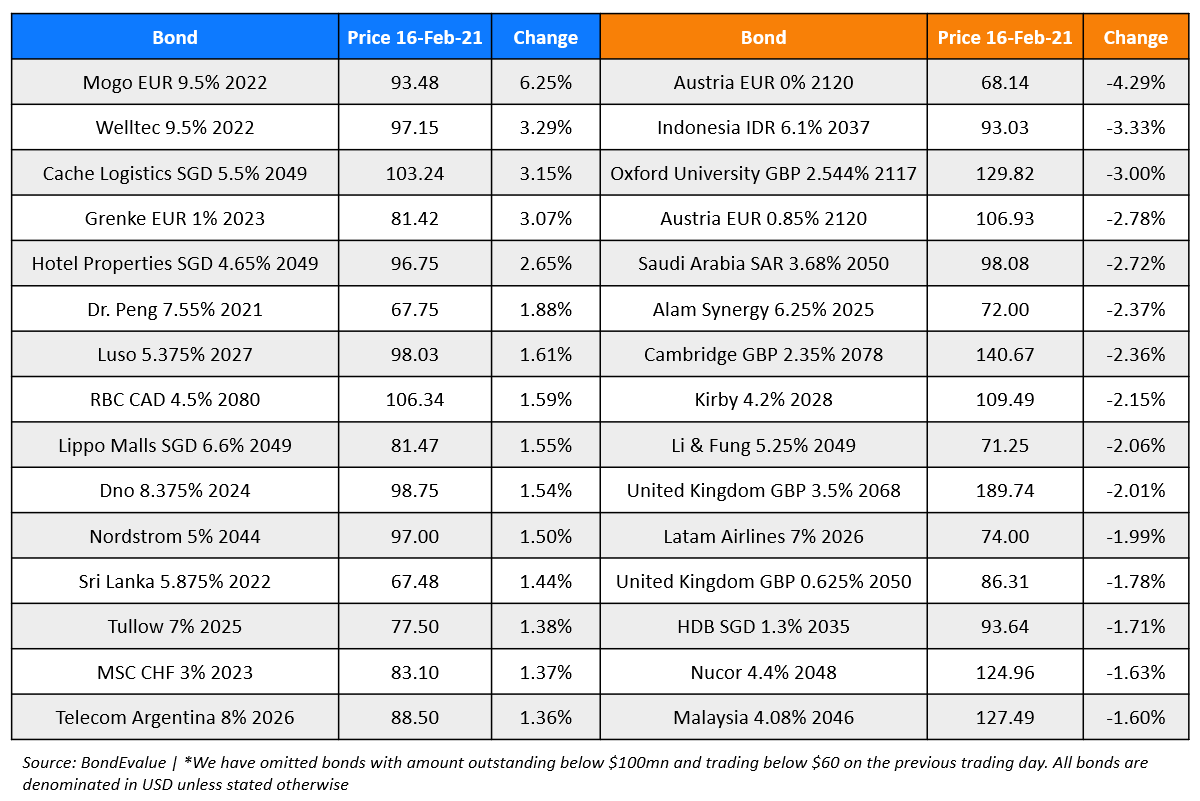