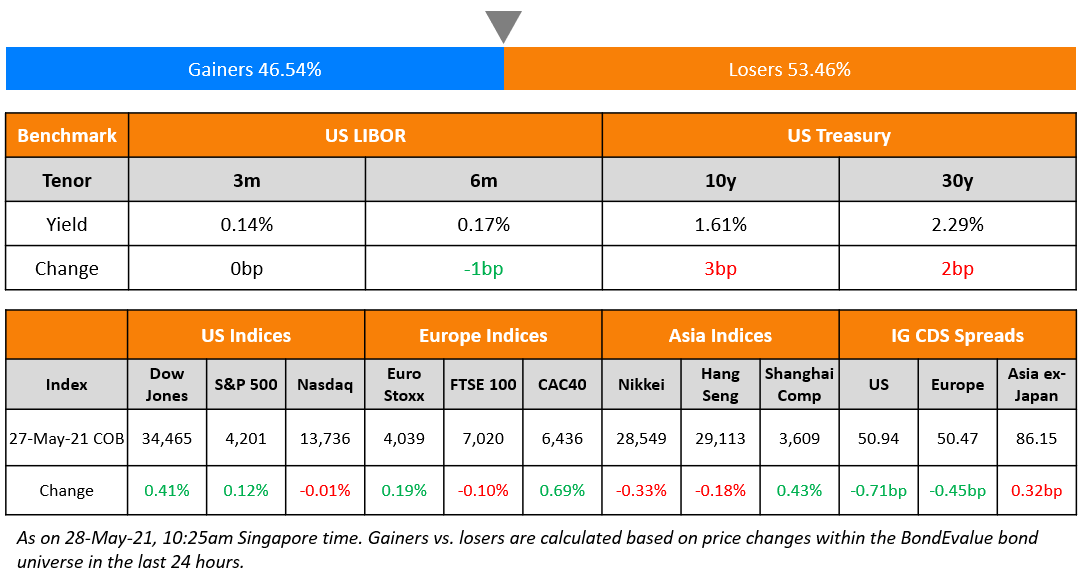 S&P closed marginally higher by 0.1% while Nasdaq ended flat. Tesla continued rising with another gain of 1.9% while Boeing was also up 3.9%. Amazon, Apple and Nvidia pulled down the index, down 1.1%, 1.2% and 1.4% respectively. The US 10Y Treasury yields rose to 1.6% on encouraging data – US jobless claims came in at 406k vs. 444k in the week prior beating expectations of 425k. President Biden is also set to propose a $6tn budget for the US later today. European Indices had a mixed close. While FTSE and DAX were down 0.1% and 0.3%, CAC was up 0.7%. US IG CDS spreads were 0.7bp tighter and HY spreads were 1.5bp tighter. EU main spreads were 0.5bp tighter and crossover spreads tightened 2bp. Asian equities had a good start, up ~1% with Asia ex-Japan CDS spreads widening 0.3bp. 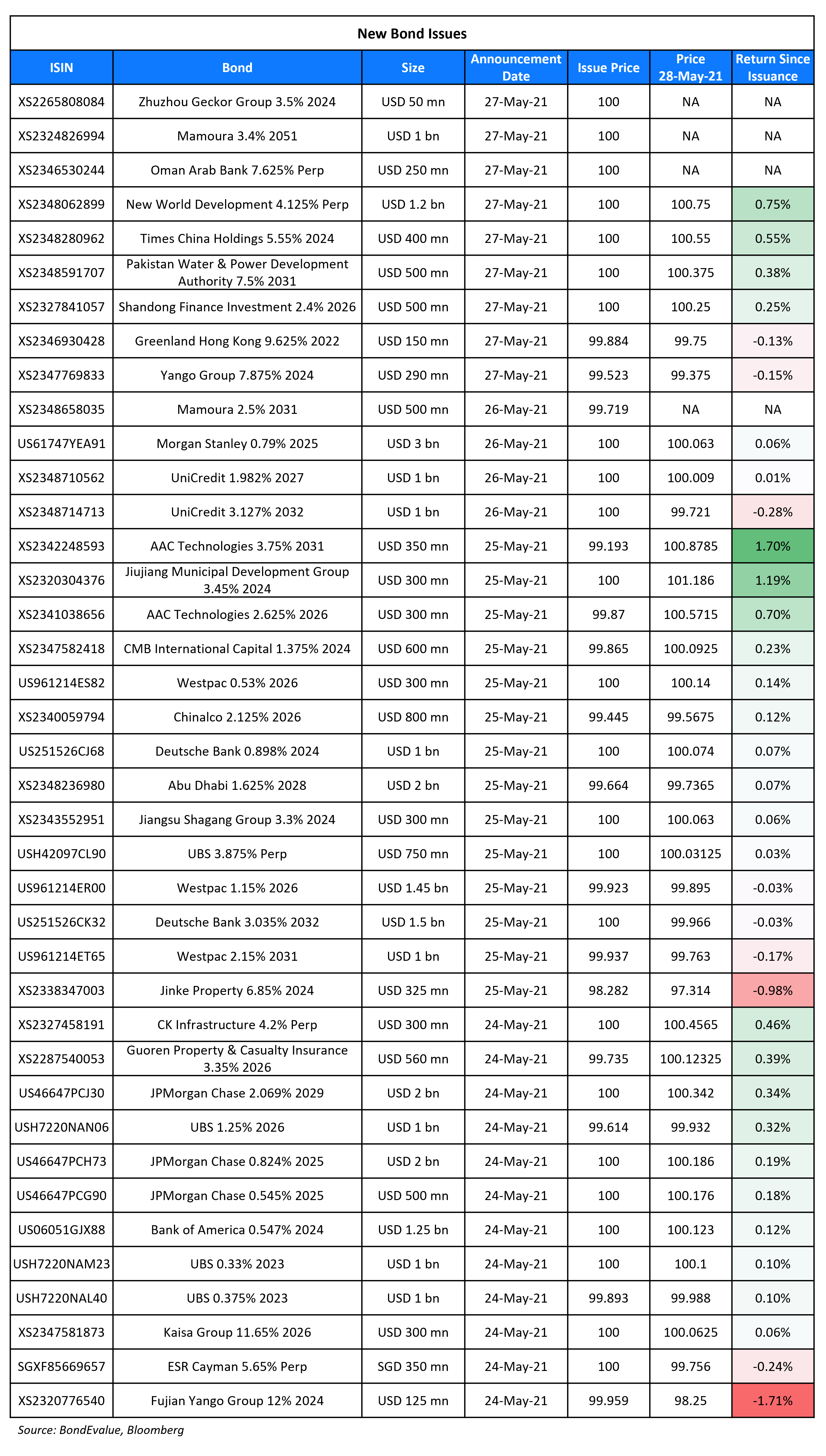 Greenland Hong Kong raised $150mn via a 364-day note at a yield of 9.75%, unchanged from initial guidance of 9.75% area. The bonds are unrated and received orders over $520mn, 3.5x issue size. Proceeds will be used for offshore debt refinancing.

Yango Group raised $290mn via a 3.25Y non-call 2.25Y (3.25NC2.25) green bond at a yield of 8.05%, 40bp inside initial guidance of 8.45% area. The bonds have expected ratings of B+, and received orders over $1.55bn, 5.3x issue size. Asian took 92% of the notes and EMEA 8%. Fund/asset managers received 93%, banks and financial institutions 5%, and private banks 2%. Yango Justice International is the issuer and the Shenzhen-listed company is the parent guarantor. Proceeds will be used for offshore debt refinancing.

Shandong Finance Investment raised $500mn via a 5Y bond at a yield of 2.4%, 40bp inside initial guidance of 2.8% area. The bonds have expected ratings of A2/A+, and received orders over $2.6bn, over 5x issue size. The bonds will be issued by SFG International Holdings and guaranteed by Shandong Finance Investment. Proceeds will be used for offshore project investment and working capital.

Lendlease Global Commercial REIT raised S$200mn via a Perpetual non-call 5Y (PerpNC5) at a yield of 4.2%, 15bp inside initial guidance of 4.35% area. The bonds are unrated and received orders over S$540mn, 2.7x issue size. Private banks which will receive a 25-cent commission, bought 64% of the deal while fund managers/insurance companies/banks/hedge funds took a combined 36%. Singapore accounted for 98% of the deal. If not called, the coupon will reset at the end of the fifth year and every five years thereafter to the prevailing SOR + initial credit spread of 324bp. RBC Investor Services Trust Singapore, as the REIT trustee, will be the issuer of the benchmark deal. Proceeds will be used for debt refinancing, potential acquisitions or investments and for general working capital and capital expenditure needs.

A Formosa is a bond which is issued in Taiwan by a foreign bank or corporation but is not denominated in the New Taiwanese Dollar. It is a way for multinationals to raise capital in Taiwan. To qualify as Formosa, borrowers must have credit ratings of BBB or higher. Formosa bonds are listed and traded on the Taipei Exchange.

On White House and Treasury watching inflation closely – Janet Yellen, US Treasury Secretary
“The recent inflation we have seen will be temporary, it’s not something that’s endemic,” Yellen said. “I expect it to last several more months and to see high annual rates of inflation through the end of this year.”
On the possibility of rates rising in 2022 if economy recovers – Gertjan Vlieghe, Bank of England policymaker
“In that scenario, the first rise in Bank Rate is likely to become appropriate only well into next year, with some modest further tightening thereafter,” he said. “It would probably take until the first quarter of next year to have a clear view of the post-furlough unemployment and wage dynamics, so a rise in Bank Rate could be appropriate soon after,” he said. “The institutional framework for monetary policy has fundamentally changed since then,” he said. “At that point, negative interest rates absolutely become a relevant and important tool,” he said.
On European investors proving picky even with inflation fears on hold – Denise Yung, portfolio manager at Lombard Odier Investment Managers
“We’re now much more selective on individual names, rather than expecting a general compression,” said Yung. “Rising rates will continue to pressure total returns.” “Inflation overshooting and leading to earlier-than-expected action is a real risk, possibly later this year,” Yung added.
On the surge in the usage of the Federal Reserve’s reverse repo facility which earns nothing – Subadra Rajappa, a strategist at Societe Generale SA
“I don’t think tapering is going to solve this.” “Tapering is only going to add to the confusion. If they taper asset purchases, it’s going to roil global markets.” “There will still be demand for the reverse repo facility.”
On India bond returns becoming highest in Asia as Covid cases fall – Neeraj Seth, head of Asia credit at BlackRock Inc
“We find select opportunities in bonds that are pricing in pessimistic or downside scenarios in Indian investment grade, with valuations that are attractive despite very robust standalone performance,” said Seth. 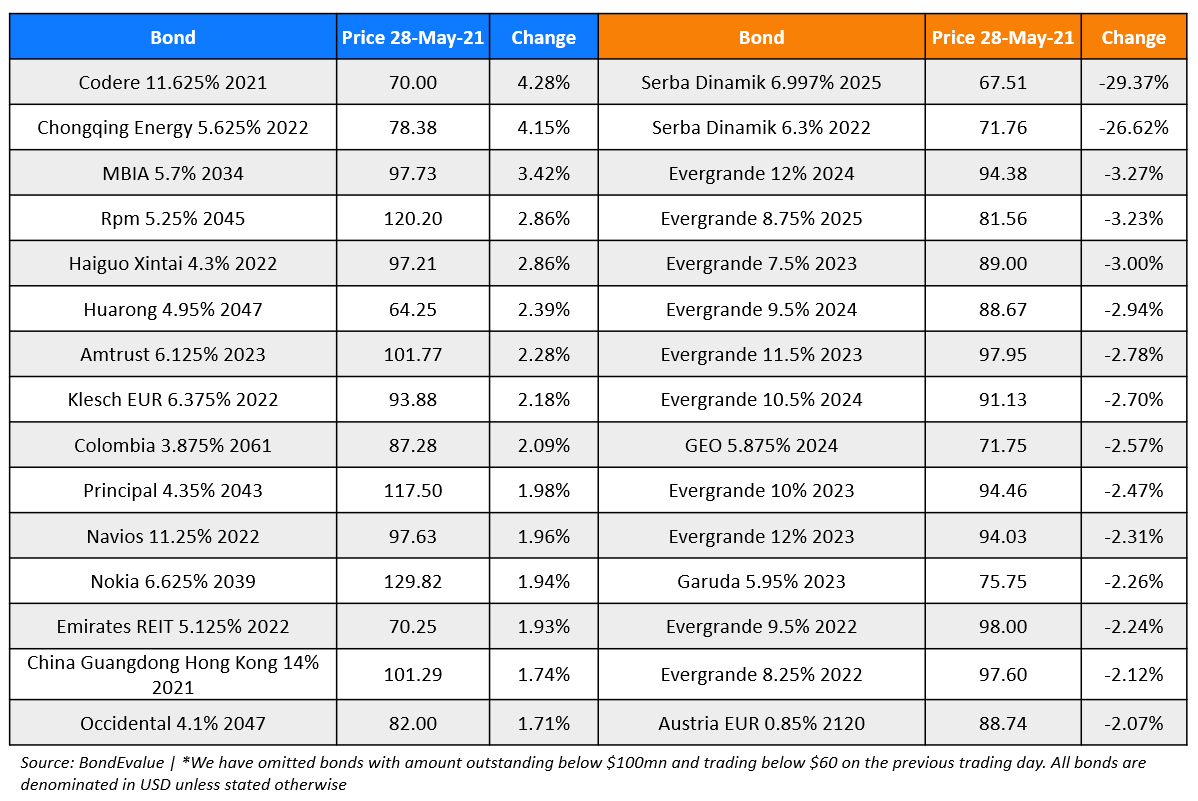