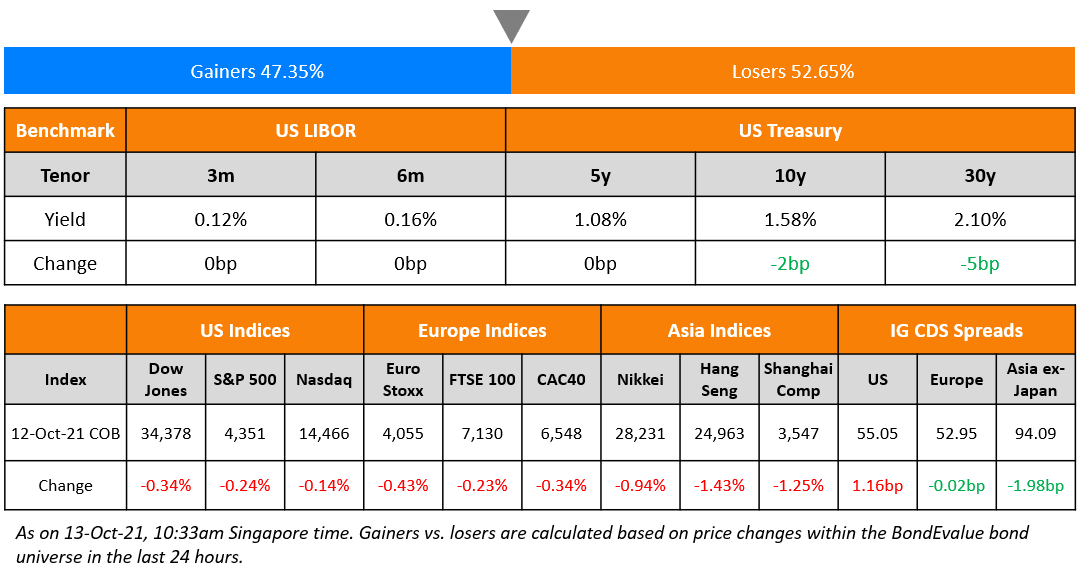 US equities ended lower for a third day with the S&P and Nasdaq down 0.2% and 0.1%. Real Estate was up 1.3% while Communication Services was down 1% with other sectors ending mixed. US 10Y Treasury yields eased 2bp to 1.58%. European stocks were also lower with the DAX and CAC down 0.3% each and the FTSE down 0.2%. Brazil’s Bovespa ended 0.6% lower. In the Middle East, UAE’s ADX was up 0.1% and Saudi TASI was up 0.3%. Asian markets opened mixed with Shanghai down 0.7%, Nikkei down 0.2%, while the STI was up 1.3%. HSI is closed. US IG and HY CDS spreads widened 1.2bp and 6.9bp respectively. EU Main CDS spreads were flat and Crossover CDS spreads widened 2.5bp. Asia ex-Japan CDS spreads tightened by 2bp. 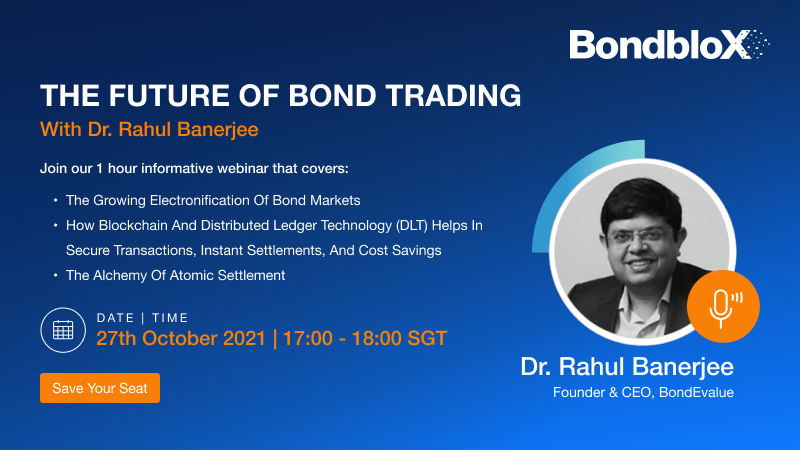 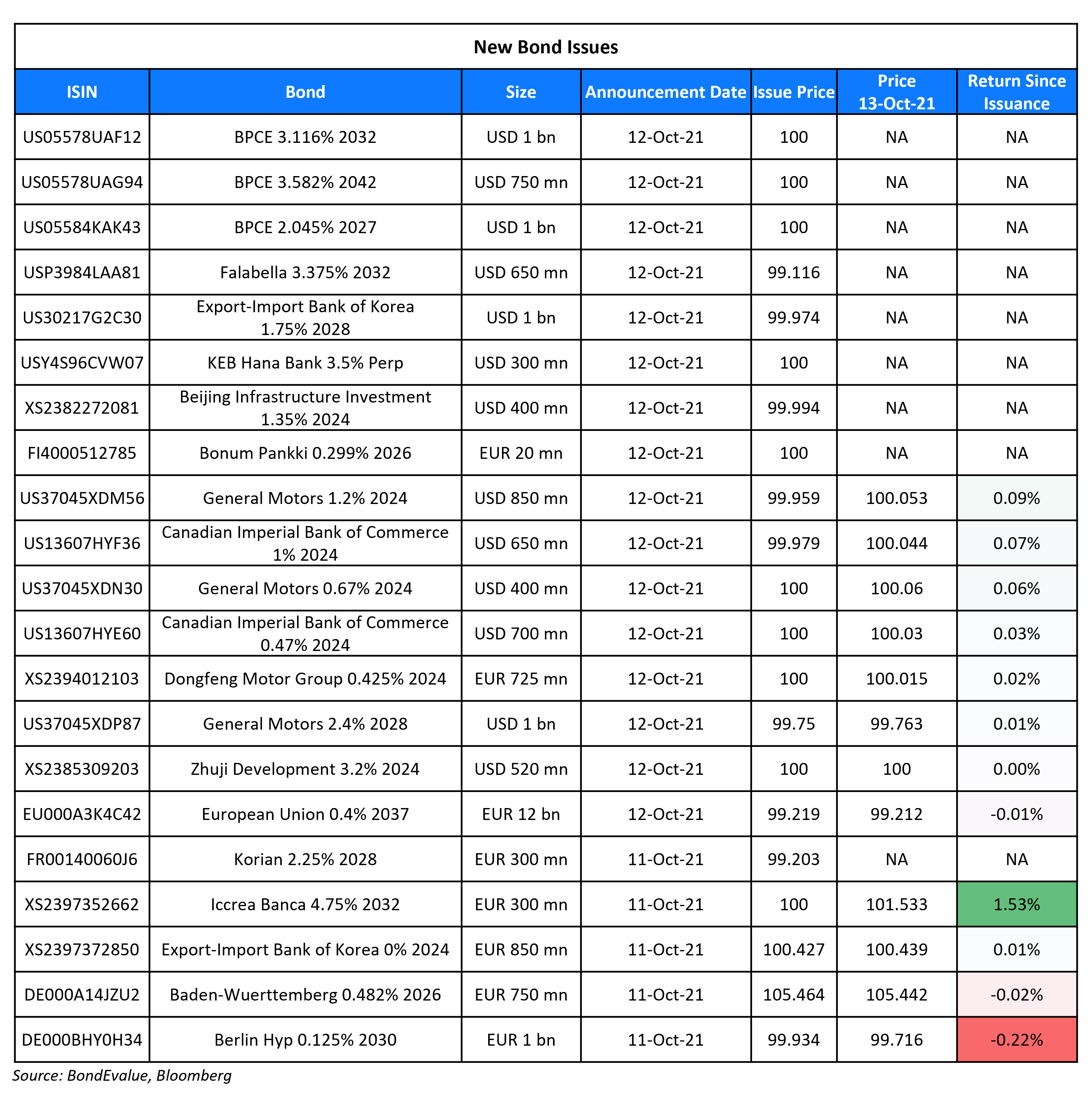 Kexim raised $1bn via a 7Y green bond at a yield of 1.754%, 25bp inside the initial guidance of T+60bp area. The bonds have expected ratings of Aa2/AA/AA- (Moody’s/S&P/Fitch), and received orders over $2bn, 2x issue size. Proceeds will be used to finance or refinance projects or assets related to renewable energy, clean transportation, energy efficiency, sustainable water and wastewater management and pollution prevention and control under the policy bank’s sustainable finance framework. APAC bought 43%, EMEA 56% and the US 1%. Banks took 58%, central banks and offshore investors 34%, asset managers and fund managers took 5%. Kexim also raised €850mn via 3Y green bonds on Tuesday, which are currently trading at 100.439, yielding -0.15%.

KEB Hana Bank raised $350mn via a Perp NC5 sustainability AT1 bond at a yield of 3.5%, unchanged from initial guidance. The bonds have expected ratings of BBB– (S&P), and received orders over $625mn, 1.8x issue size. Proceeds will be allocated to finance and/or refinance green and social projects under KEB Hana’s sustainable financing framework. The notes have a permanent full write-down if the bank is designated as insolvent pursuant to Korea’s Act on the structural improvement of the financial industry. The notes are first callable on 19 October 2026, and if not called, the coupon will reset on 19 October 2026 and every five years thereafter to the prevailing US 5Y Treasury + 240.9bp.

Beijing Infrastructure Investment raised $400mn via a 3Y bond at a yield of 1.352%, 40bp inside the initial guidance of T+115bp area. The bonds have expected ratings of A+/A+ (S&P/Fitch), and received orders over $1.56bn, 3.9x issue size. The bonds will be issued by indirect wholly owned BVI subsidiary Eastern Creation II Investment Holdings and guaranteed by Beijing Infrastructure Investment.

Zhuji State-owned Assets Management raised $520mn via a 3Y bond at a yield of 3.2%, 30bp inside the initial guidance of 3.5% area. The bonds are unrated, and received orders over $1.3bn, 2.5x issue size. The bonds will be issued by Zhuji Development and guaranteed by Zhuji State-owned Assets Management. The issuer, based in Zhuji city in China’s Zhejiang province is the Zhuji municipal government’s largest investment, financing, urban construction, state-owned asset management and industrial innovation vehicle.

Greenium is a term that refers to the premium that investors pay when buying green bonds vs. conventional non-green bonds of the same issuer. Green bonds that trade with a greenium indicate strong investor demand for those bonds, which pushes prices higher and yields lower compared to conventional bonds. Greenium can be measured simplistically as the difference between a Green bond’s yield vs. its comparable non-Green bond or as the difference between the Z-Spread/OAS of a Green bond vs. its comparable non-Green bond. If the Green yield/spread is lesser than its comparable, then a greenium is said to exist indicating that investors are willing to sacrifice a portion of their return by purchasing the green bond as against a conventional bond.

On conditions for tapering bond buying all but been met – Richard Clarida, Federal Reserve Vice Chair
“I actually lived through, as a college student, the ‘Great Stagflation’ of the 70s, and I think there are a lot of differences,” Clarida said. “First and foremost, the 1970s were a decade of pretty substantial policy mistakes, in monetary policy. And I think central bankers learned their lesson, and I would not see a repeat of those policy mistakes.” “My baseline case is not for stagflation over the medium-run horizon. It sort of has a flavor of that right now,” he said. “In the U.S., because of the bottlenecks, most folks are tracking a pretty modest increase in aggregate demand in the third quarter, with higher prices. But I don’t think that’s going to be the trend going forward.” “I myself believe that the ‘substantial further progress’ standard has more than been met with regard to our price-stability mandate and has all but been met with regard to our employment mandate,” he said.

“I continue to believe that the underlying rate of inflation in the U.S. economy is hovering close to our 2% longer-run objective and, thus, that the unwelcome surge in inflation this year, once these relative price adjustments are complete and bottlenecks have unclogged, will in the end prove to be largely transitory,” Clarida said. “That said, I believe, as do most of my colleagues, that the risks to inflation are to the upside, and I continue to be attuned and attentive to underlying inflation trends, in particular measures of inflation expectations,” he added.

In a note by Deutsche Bank AG strategists including Jim Reid
“Obviously for this relationship to reverse we need to be in a sustainably higher inflation era.” “There is every chance we are in one and if so a lot of the relationships that have prevailed in the average person’s investment career could change.”
In a note by Bank of America strategists including Jared Woodard

“For the longer term, even if a major ‘rates shock’ is unlikely, asset allocators may want to consider two big changes for a gradual trend higher in inflation and interest rates.” “For a steady rise in inflation, ‘buy tech, not just tech’ as higher wages spur more capex and productivity in other sectors.”

“It is pretty serious now and it looks like it is going to be long and drawn out process.” “I don’t see the recovery being particularly high.” “I think 20 cents (for every dollar of the bonds’ original face value) is more or less fair.”

Steven Lam, analyst at Bloomberg Intelligence
“Tech had been a very good selling point for Ping An in recent years, but might have lost its luster.” “Many international investors are now allergic to the uncertainties in China market.”
Iris Tan, a senior analyst at Morningstar
“We expect Ping An to first stabilize its agent force and demonstrate higher productivity for the premium agent group.”
Zhang Qingyun, deputy general manager of China Vision Capital Management
“Ping An has quite some property exposure and it’s difficult for the market to gauge.”
Leon Qi at Daiwa Capital Markets
“We are more pessimistic than the market on Ping An’s investment exposure.”
Zhou Min, founder and portfolio manager of hedge fund Everest Growth Capital
“The market seems to be excessively worried about Ping An.” “Investors will need to wait and see when business fundamentals actually improve.”

On the risk of sudden and steep declines in global equity prices and home values – Tobias Adrian, director of the Monetary and Capital Markets Department at the International Monetary Fund

“Shocks could be coming from the central banks themselves because they’re tightening more quickly than previously anticipated.” “We worry that we could see a sell-off of sizable magnitude, given the level of stretched valuations.” 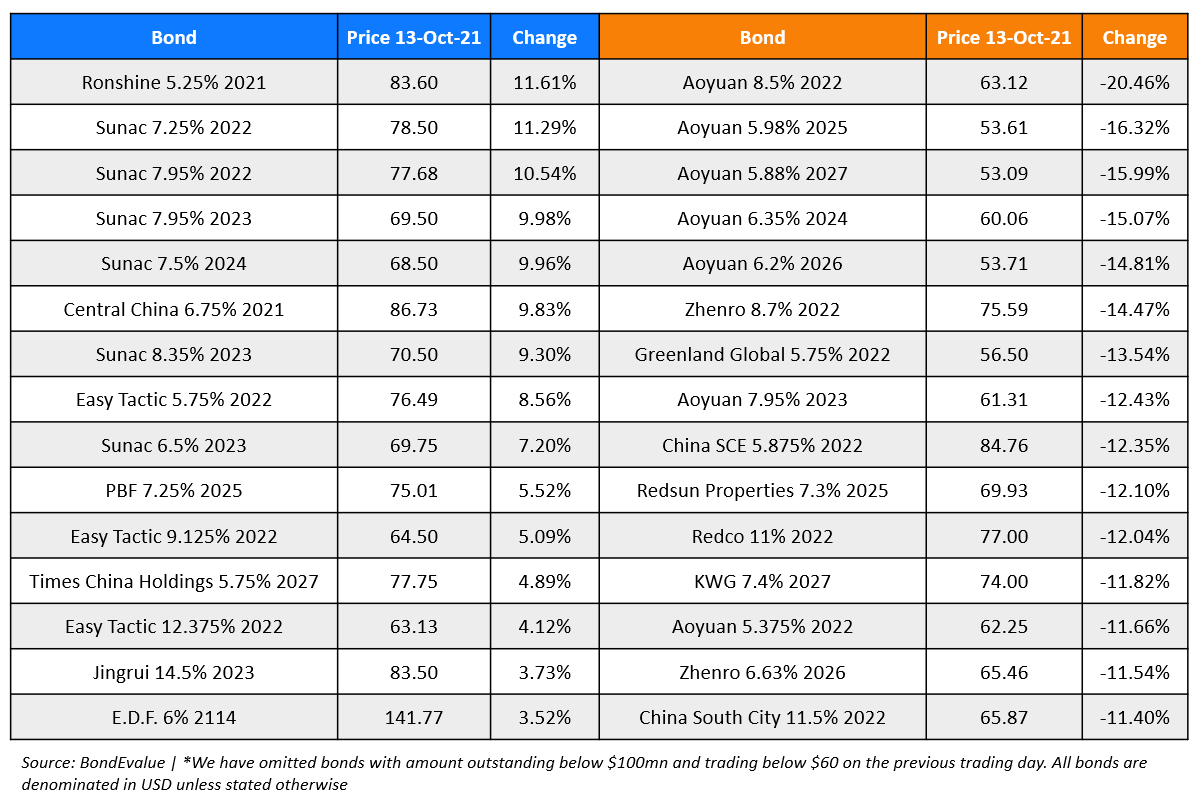