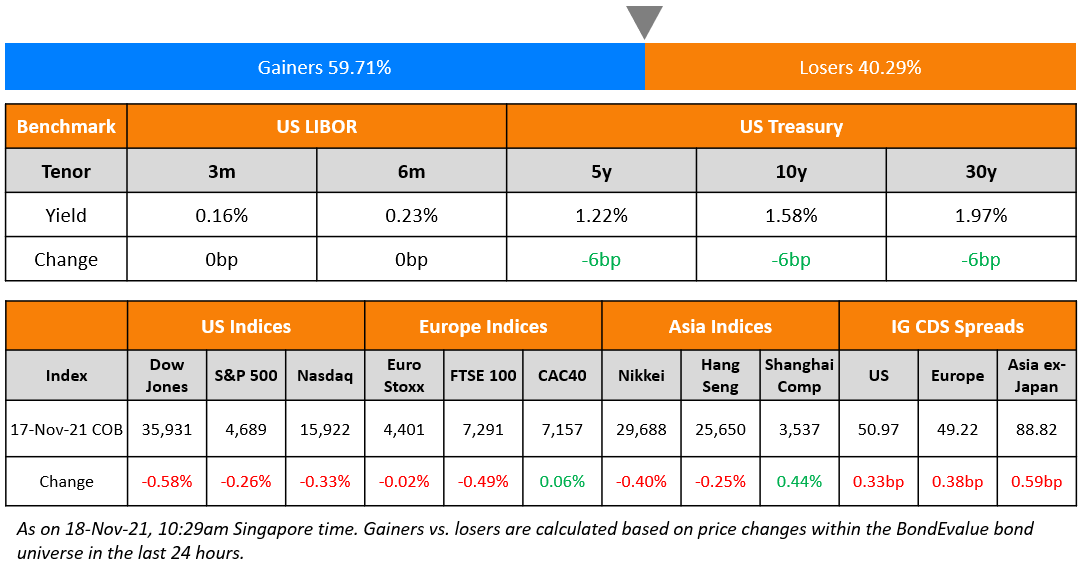 US equities ended lower with the S&P and Nasdaq down 0.3% each. Sectoral losses were led by Energy and Financials, down 1.7% and 1.1% each. US 10Y Treasury yields dropped 6bp to 1.58%. European markets were trading slightly weak with the DAX and CAC almost flat and the FTSE down 0.5% respectively. Brazil’s Bovespa ended 1.4% lower. In the Middle East, UAE’s ADX was down 0.2% and Saudi TASI was flat. Asian markets have opened broadly lower – Shanghai, HSI, and Nikkei were down 0.1%, 1.3%, 0.9% while STI was almost flat. US IG CDS spreads widened 0.3bp and HY CDS spreads were 3bp wider. EU Main CDS spreads were 0.4bp wider and Crossover CDS spreads were 1.9bp wider. Asia ex-Japan CDS spreads widened 0.6bp.

US crude oil weekly inventories saw a drawdown of 2.1mn bpd, significantly lower than forecasts of a pile-up of 1.4mn bpd. Brent however, was down ~3% and currently has dropped below $80. 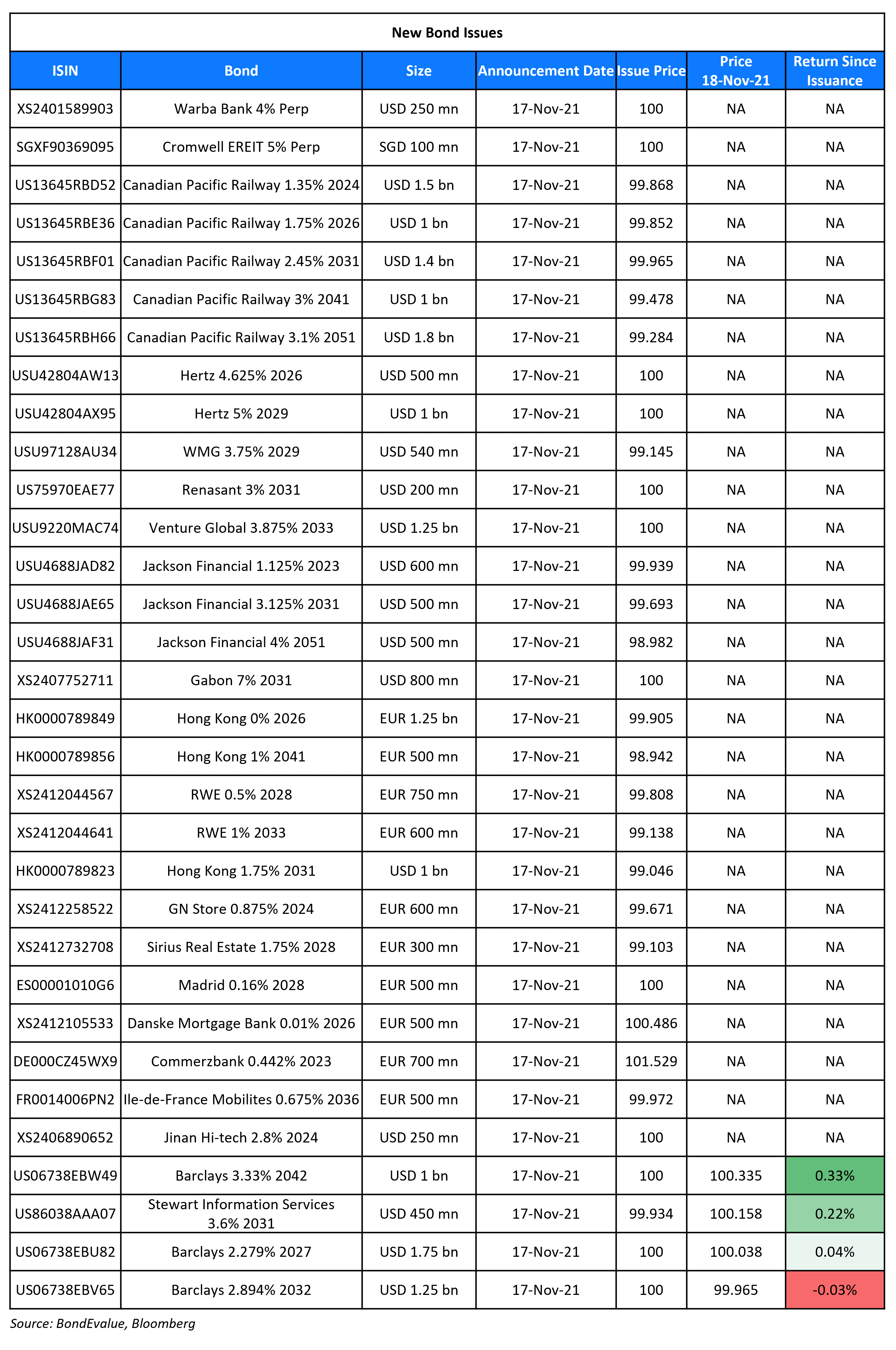 Barclays raised $4bn via a three-trancher. It raised:

The Government of Hong Kong SAR raised $3bn via a dual-currency green three-trancher. It raised:

Cromwell EREIT raised S$100mn via a PerpNC5 bond at a yield of 5%, 12.5bp inside initial guidance of 5.125% area. The bonds are unrated. The bonds have a coupon reset at the end of the fifth year on November 24, 2026, and every five years thereafter, to the prevailing 5Y SORA-OIS plus the initial credit spread of 361.5bp. There is no step-up. Cromwell EREIT can use the proceeds for financing or refinancing acquisitions, investments, asset enhancement projects, refinancing debt and general corporate needs.

Guotai Junan Securities raised $300mn via a  3Y Yulan bond at a yield of 1.619%, 40bp inside initial guidance of T+115bp area. The bonds have an expected rating of BBB+ by S&P. Guotai Junan Holdings is the issuer while the Shanghai and Hong Kong-listed parent is the guarantor. Proceeds will be used for debt refinancing and general corporate purposes. The bonds received orders over $1.2bn, 4x issue size. This is only the second issuance of Yulan bonds ever, after Bank of China, acting through its Hong Kong branch, printed the first Yulan bond raising $500m in January.

Gender Bonds are bonds that are broadly issued to support the advancement, empowerment and equality of women. Like other themed bonds, they can be issued as senior unsecured notes referencing the issuer’s balance sheet where proceeds are for specific use on eligible ‘gender’ activities. Most bonds issued with a ‘gender’ label have so far relied on the ICMA’s Social Bond Principles, the UN’s Sustainable Development Goals or the UN Women’s Empowerment Principles as reference standards. Gender related areas include addressing financial inclusion of women, female entrepreneurship in emerging markets, access to leadership positions and gender-positive corporate policies. Turkey’s Garanti Bank was the first private sector bank in the world to launch a gender bond dedicated to financing women-owned small businesses in emerging markets in April 2019.

ICMA is trying to spur more gender bond issuances with new guidelines, including types of potential projects and gender-based targets.

“When I step back and think about my 40-year career, there have been periods of time when greed has far outpaced fear — we are in one of those periods… My experience says those periods aren’t long lived. Something will rebalance it and bring a little bit more perspective… Chances are interest rates will move up, and if interest rates move up that in of itself will take some of the exuberance out of certain markets”

“We think that as lift-off gets under way, the slope is likely to increase as some of the uncertainties around the global economy, such as supply-chain bottlenecks, start dissipating”

“The government data is lagging behind the market. New home prices in major cities have fallen by up to 15 per cent from the peak early this year…Home prices have not bottomed out. Buyers are staying on the sidelines, wary that builders may fail to deliver their homes on schedule”

On ECB Warning of exuberance’ in housing, junk bonds and crypto assets

“Concerns particularly relate to pockets of exuberance in credit, asset and housing markets as well as higher debt levels in the corporate and public sectors…A correction in markets could be triggered by a weaker than expected economic recovery, spillovers from adverse developments in emerging market economies, a re-intensification of stress in the non-financial corporate sector or abrupt adjustments in market expectations regarding the prospective path of monetary policy normalisation” 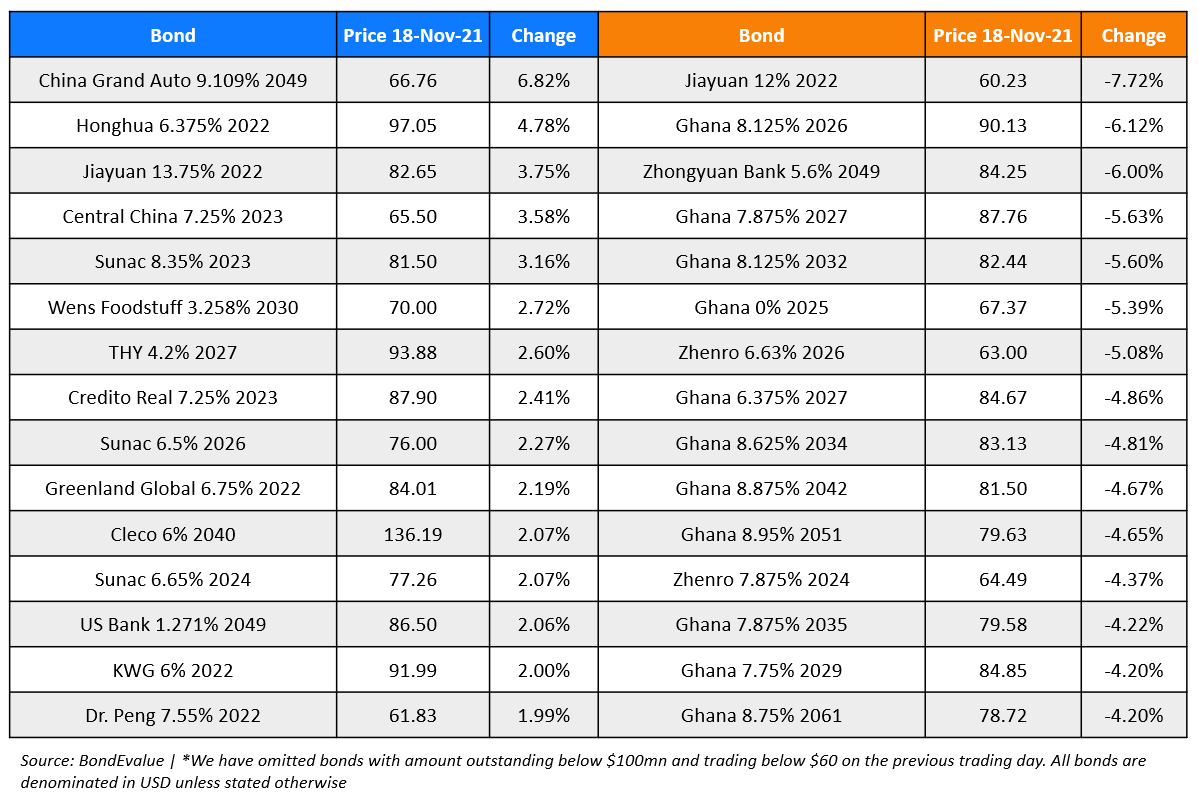